Design a site like this with WordPress.com
Get started
Skip to content
aprilpearl98 Belles Gen 5, Breed out the ugly March 11, 2019March 11, 2019 2 Minutes

Well I suppose toddlers are pretty darn cute in Sims, even if they are super needy. So here, have some cute pictures:

It was sunny out so I took the whole family outside and the girls got to play in the paddling pool. Unfortunately the pool didn’t seem to do much for their hygiene… I am generaly too lazy to do much more than the bare minimum to keep my sims’ toddlers alive, so they usually have a very stinky toddlerhood.

They also played in the sprinkler, which oddly made them ever dirtier!

And Katharine playing with Roxana.

Katharine: What is that smell?!

Katharine managed to collect the fifteen pieces of evidence needed to put together the secret dossier on Strangerville. She then persuaded one of her colleagues in the military to give her the key card for the abandoned lab.

We used the keycard to get through the locked door in the secret lab.

The doors slid open to reveal a cloud of spores.

Katharine went downstairs, where she found several rooms containing lab equipment and some of the bizarre plants.

There was also this corridor which was full of blue smoke and spores. Of course, I made Katharine attempt to enter.

It didn’t go so well. For a moment I worried that she might be poisoned and June would be left a single Mum.

When she woke up she was like this – not gonna lie it kinda freaked me out. 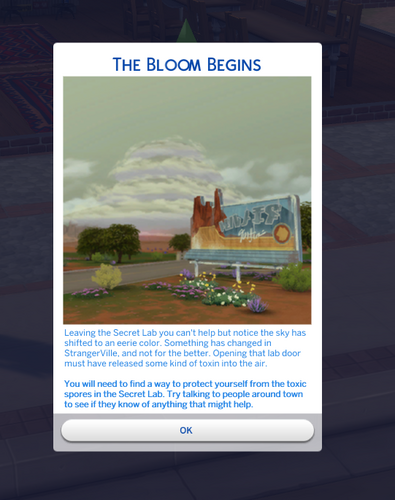 When she left the lab this popup appeared. Looks like Katharine inadvertently released spores into the town. Oops. Thankfully, upon leaving the lab, Katharine snapped out of her possessed state.

Katharine needed to persuade this dude to give an infection scanner so that she could collect fifteen spores for chemical analysis. He was actually really attractive and there was an option to seduce him for the scanner… But, I didn’t want her to betray June, so we bribed him instead.

A few moments after handing over the scanner, he was possessed. Should have hung on to it!

Katharine started scanning for spores near the odd plants; she had most luck outside the secret lab.

Once we had fifteen spores, she was able to analyse them using the chemical analyser in the lab.