Design a site like this with WordPress.com
Get started
Skip to content
aprilpearl98 Belles Gen 5, Breed out the ugly March 8, 2019March 12, 2019 3 Minutes

Well hello again! I’m sorry that I haven’t posted in so long. These past few months have been pretty dreadful at university and I’ve been too tired at the end of each day to do anything which involves thinking – including (sadly) playing sims. I’m not sure how regularly I’ll be able to post now but I hope that I can continue to do so.

I will be putting my Selection Challenge on hold, so I am sorry if anyone has been reading that. It’s just that that particular challenge requires quite a bit of effort to play and write and currently I just want something a bit more relaxed to do when I’m not studying. But, my BOTU challenge will hopefully continue!

Our family has moved to Strangerville! Here is their house. To be honest, they could have afforded the massive house since they have all the money that my previous generations have saved up, but I wanted to save them the high bills for a while.

Mayor Whiskers seems to like it here – look at him gambling through the desert! I’ve missed this cat.

The welcome wagon was… Strange, to say the least. The possessed sims’ faces are a lot creepier than I had expected them to be!

I really wouldn’t eat fruitcake served to me by someone in this state. I’d expect it to be laced with drugs or something!

Katharine tried talking to several of our ‘guests”, but they were having none of it!

I think Katharine was relieved when they all left.

Katharine: Hmmm either all my neighbours are stoners or something is very wrong here. I think an investigation is in order.

If you remember, Katharine had been in the acting career. But, I decided to put her into the military career which came with Strangerville, since I want her to complete the Strangerville mystery aspiration and I figure being in the military might help in some way.

Katharine read up on Strangerville at the library. As you can see, she is taking her investigation very seriously.

We found the lab and made some notes on the mysterious locked door there. 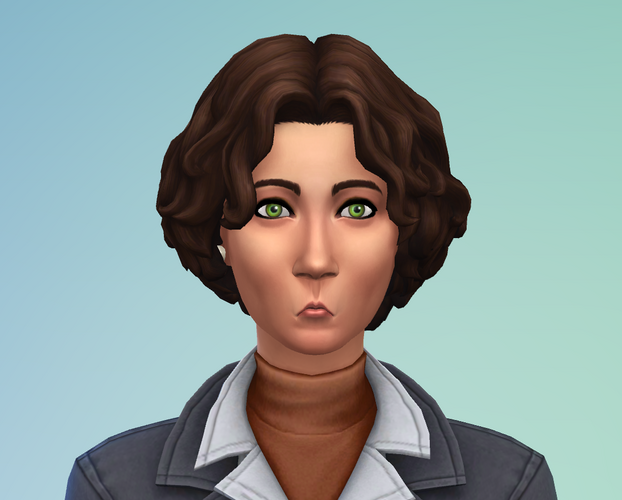 I’ve decided to give both Katharine and June slight makeovers, using some of the items from the new pack. Katharine got a new haircut and clothing which I thought more suiting for an amateur detective. 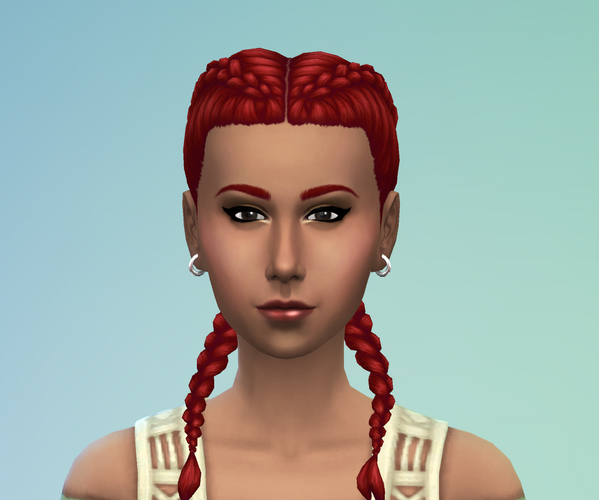 June also got some new clothes, and these braids which are so cute on her!

Katharine has to find 15 pieces of evidence about Strangerville so that she can compile a secret dossier. We started off at the abandoned lab sifting through some papers which had conveniently been left lying around.

Then, we put bugs on a few people around town so we could listen to their conversations. We have 8 pieces of evidence now, so only 7 pieces to go! 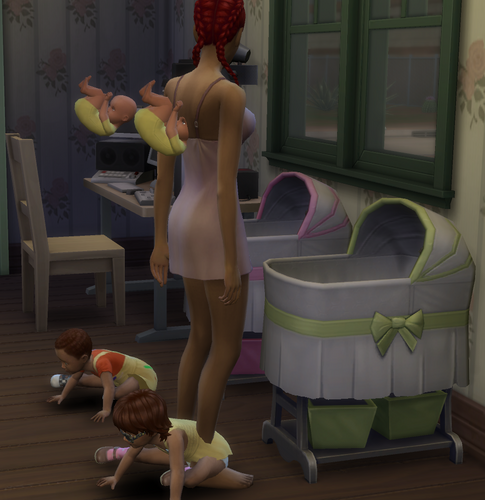 Christin and Roxana (remember them?) aged up into toddlers and… um… There are so many things wrong with this picture! Firstly, it looks as though the girls are simultaneously babies and toddlers. Secondly, baby Christin is partially embedded in June’s back. Thirdly, June is standing in toddler Christin! 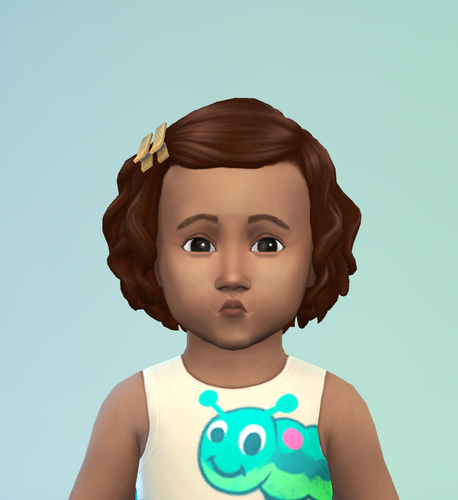 Here is Christin. As you can see, she inherited The Mouth, so we’ll have to continue for at least one more generation. I was so hoping to breed that mouth out this generation! 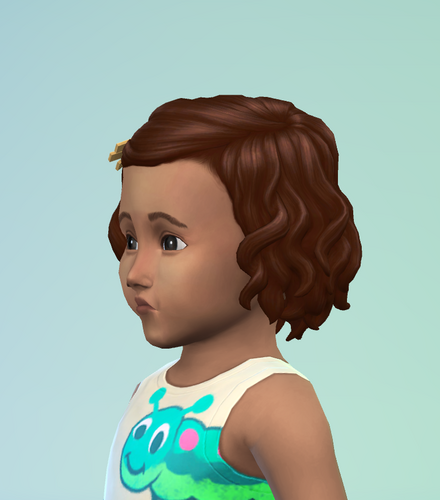 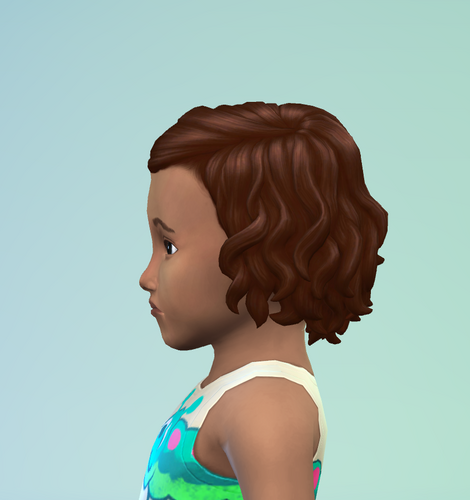 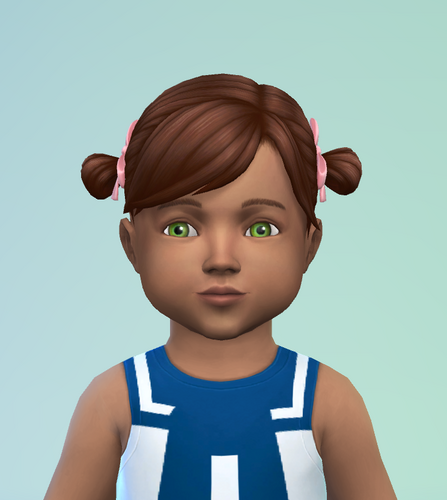 And here is Roxana. The fates are obviously taunting me since she (our NON heir) has a normal mouth! And she got the pretty green eyes too. Sorry Christin, looks like you’re going to be the ugly twin! 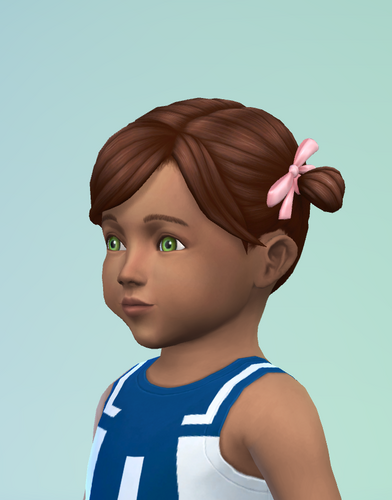 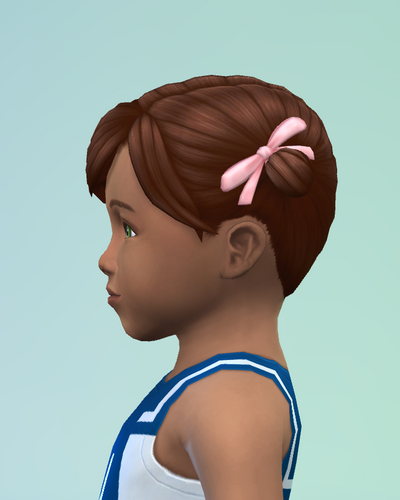 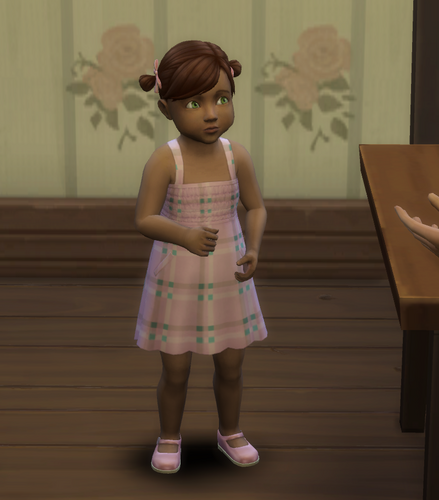 Roxana in her everyday outfit. 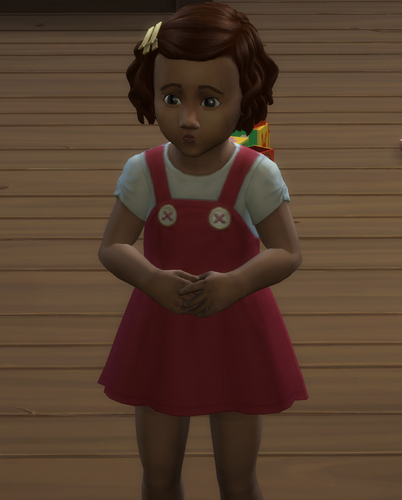 Christin in her everyday outfit.

They certainly look cute, but I’m definitely not looking forward to having two toddlers – they are so needy!

Oh, I almost forgot to mention that Christin rolled the charmer trait and Roxana the angelic trait.

I should probably apologise that June was basically excluded from this chapter. I swear this always happens to my heirs’ spouses… I’ve gotten really caught up in trying to solve the Strangerville mystery, so poor June (and the twins) will probably get a little neglected by me until Katharine solves it!