Last chapter, Galatea met all of the guys and they competed in a football challenge to win time with her. We will discover the winners of that challenge this chapter

If you follow the forum thread, you may have seen that I managed to lose the bachelorette save so I had to replay day 1. When I replayed day 1, I did take screenshots so I may replace some of the screenshots of Galatea talking to the guys in the previous chapter with some of the new screenshots but I will keep all the dialogue the same.

Anyway, before I got round to replaying day 1, I had some thoughts about how I could have as little involvement as possible this generation and decided to try them out.

First off, in the replayed day 1, Galatea spent 1 hour with each candidate but (apart from me making her do a ‘get to  know’ on each guy) I did NOT choose any social interactions – what was said was all left totally up to Galatea and the guys. The only other thing I did was to turn off autonomy so that they had to talk for the full hour.

The idea behind leaving the conversation up to Galatea and the guys is that any differences in relationship scores will be 100% up to the sims, not because of the social interactions which I chose.

Dates will work in the same way: I will start off a conversation with a ‘get to know’ or ‘ask about day’ but after that it’s up to the sims to choose what to talk about.

Last generation I controlled Vlad and I made him choose interactions with the candidates when he talked to them – although I tried to keep things as fair as possible and choose the same sorts of interactions it was hard to keep track and I like the idea of having less involvement.

Also, just like last generation, in between scheduled conversations with the guys I will not make Galatea start any conversations but I will leave free will on and see who approaches her.

Sorry for the wall of text and well done if you actually read it! I am trying to think things through very thoroughly this time as you can tell haha. 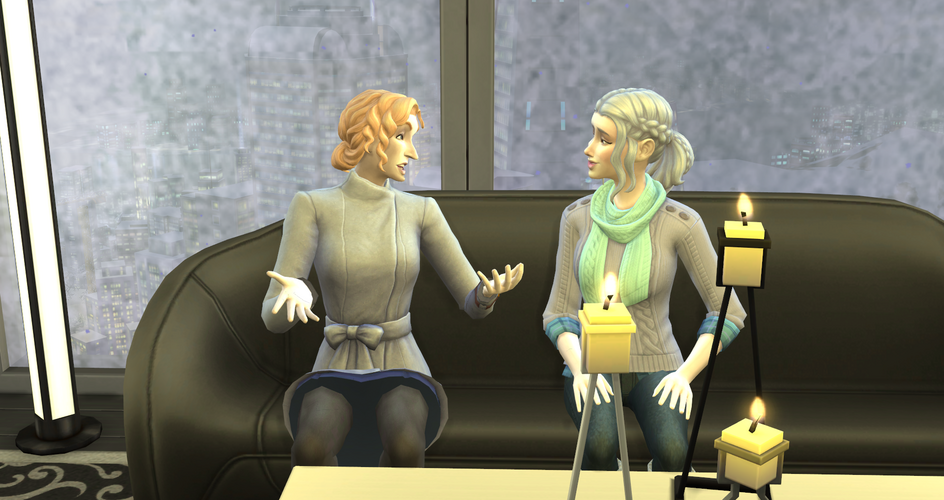 Lets’ go back briefly to the evening of day 1. Galatea has returned to Circe’s apartment after meeting all of the candidates.

Galatea: Why does it have to be this difficult? They all seem so nice, but I’m going to have to kick one out tomorrow and I feel bad about it already.

Circe: Oh boohoo you have your pick of seven handsome men – what torture, what a hard life!

Galatea: It is hard!

Circe: Do you have any favourites?

Galatea: Maybe… But I’m not telling you who. Anyway, I’m exhausted, where am I sleeping?

Circe: I don’t know, which sofa do you want?

Galatea: You invite me to stay with you and then you don’t even offer me a bed? Rude!

Circe: For the last time, you invited yourself! And we don’t have a spare bed so there’s the sofa or the floor. 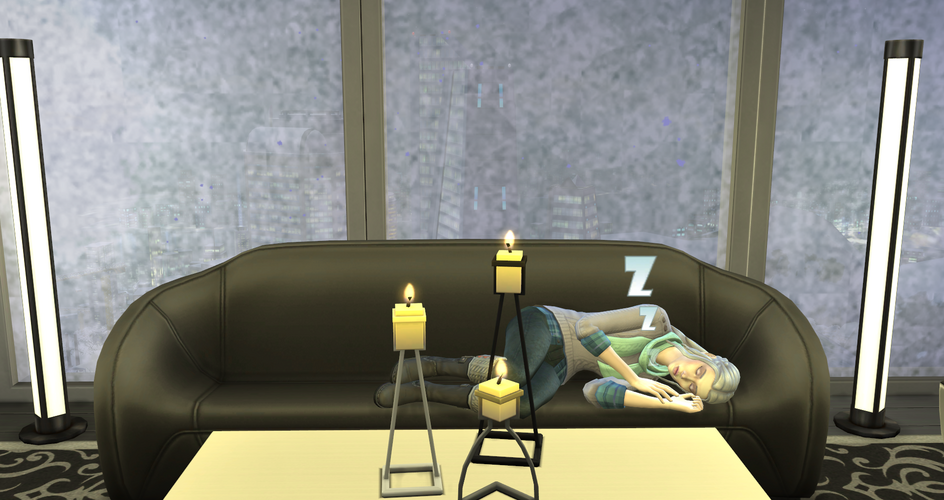 Galatea spent the night on Circe’s sofa. I wonder if she was dreaming of anyone… 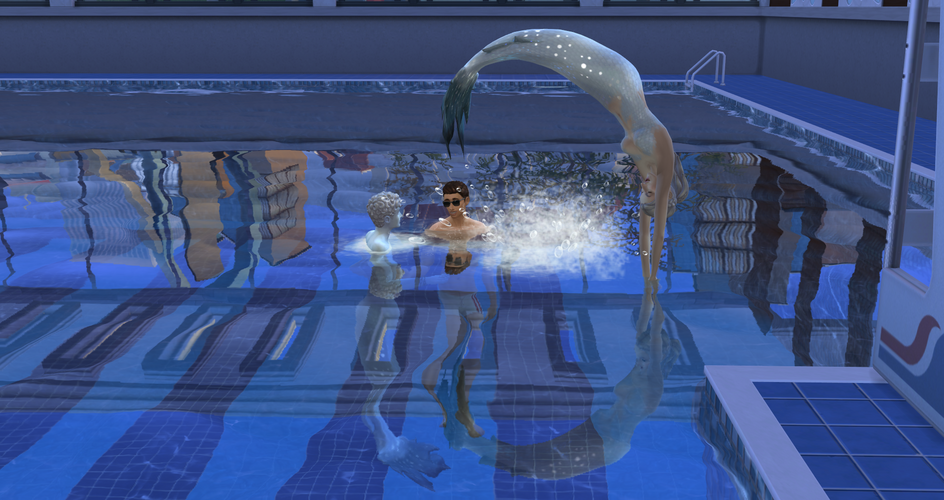 Here we are at the group date and as you can see the lucky winners were Will and Adonis (yes, that is his merman form).

Adonis: Don’t exist? You’re looking at two of them.

Galatea: Hey, stop chit chatting and look at me! I’m doing an awesome trick, you guys had better not miss it. 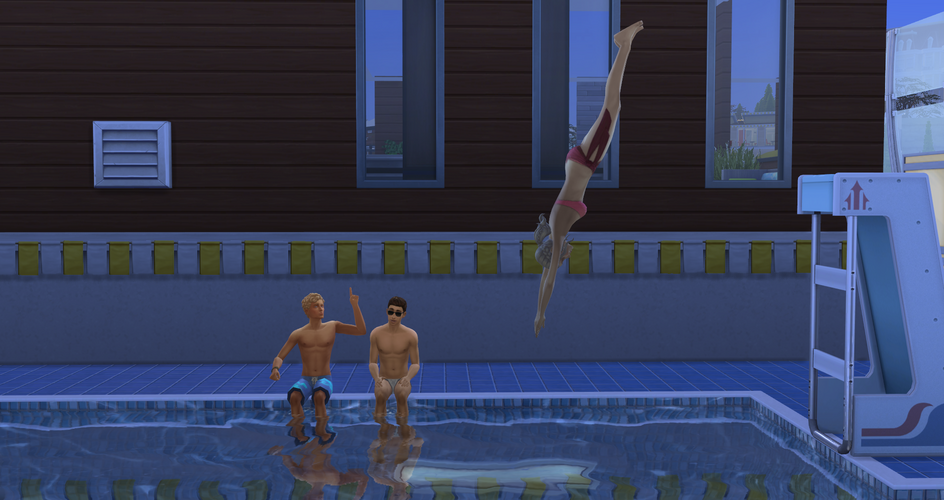 Will: Oh good she has legs again. I knew I was just seeing things before. 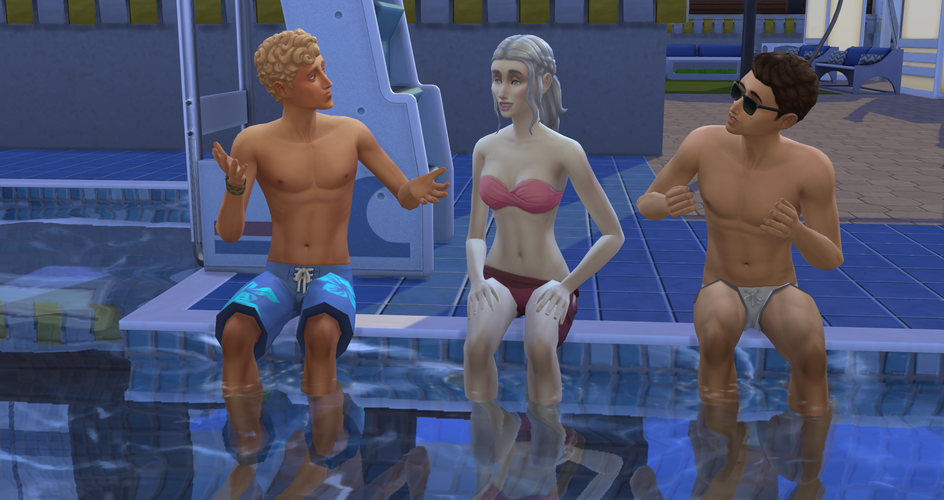 Galatea: So, how are you guys enjoying the pool?

Will: Well, swimming isn’t really my thing – these sunglasses are far too expensive to get wet. On the other hand, I wouldn’t mind having a pool this size in my back yard. No one who saw it could help knowing how wealthy I was.

Adonis: It’s great to be outside, although I have to admit that I would prefer to be swimming in the sea of Sulani back home. Nothing beats salt water!

Galatea: I’ve never seen the sea myself but my mother is from Sulani and she also says that the sea is the best place to swim. Maybe you will get a chance to go swimming in Sulani some time soon.

Adonis: You mean, on a dream date with you?

Will: No, she’s talking about sending you home from the competition, idiot.

Galatea: I don’t know what I meant, I was literally just making conversation… 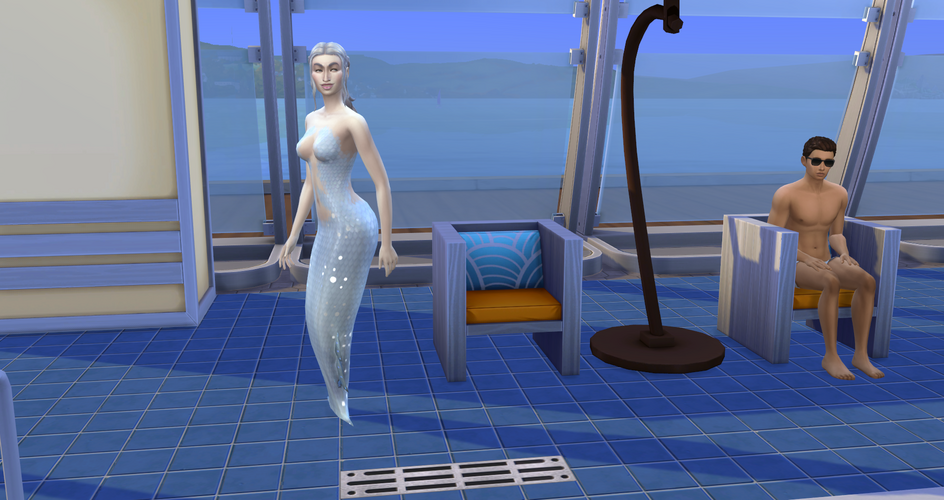 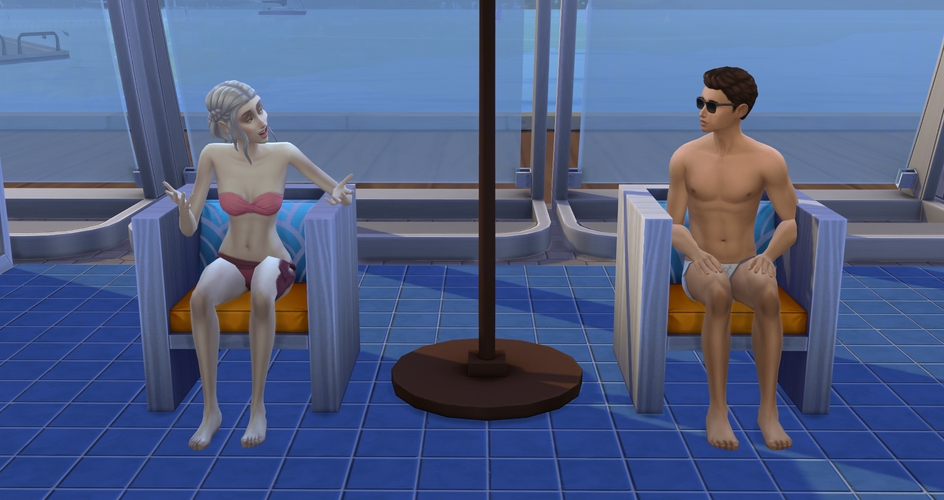 Will: So, how much did you pay for the fake mermaid tail? It almost had me fooled for a second, very realistic!

Galatea: Fake? That tail is 100% real. I’m a mermaid – well, my mum calls us nymphs but it’s the same thing really.

Will: No, no you’re having me on. Next thing you’ll be telling me you’re a werewolf or a vampire or something.

Galatea: Don’t be silly, there’s no such thing as werewolves! And I’m not a vampire, although my Father’s a vampire and so is my sister and one of my brothers.

Will: Hahaha you’re hilarious, Gal. Got a good laugh out of me, vampires and mermaids indeed… They don’t exist, darling! 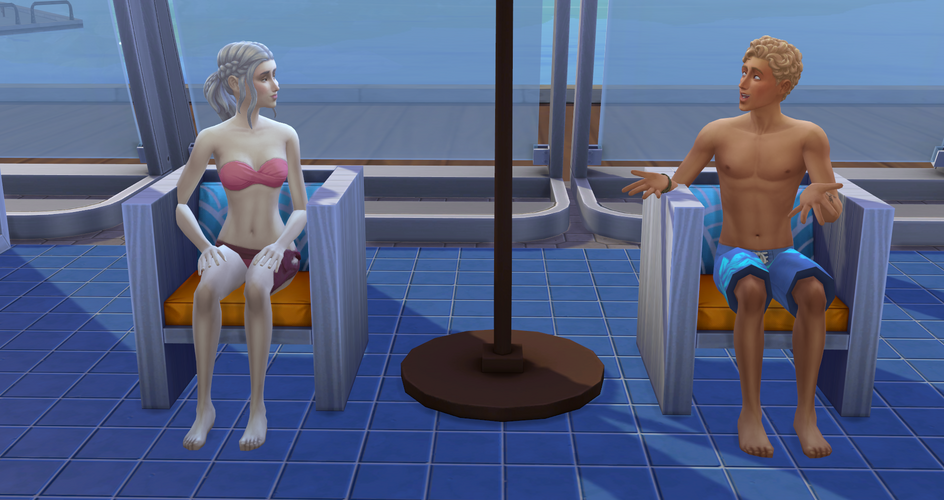 Galatea: Why don’t you tell me an interesting fact about yourself, Adonis.

Adonis: I guess the most interesting thing about me is that I’m a prince!

Galatea: A prince? So, if I married you I’d be a princess?

Adonis: Yes, I suppose technically you would be.

You forget that whoever you marry will be moving in with you, not vice versa, Galatea.

Adonis: No, no castle I’m afraid. My mother had to evacuate her kingdom when it was struck by the Great Sloth Invasion and that meant leaving behind the royal palace too. 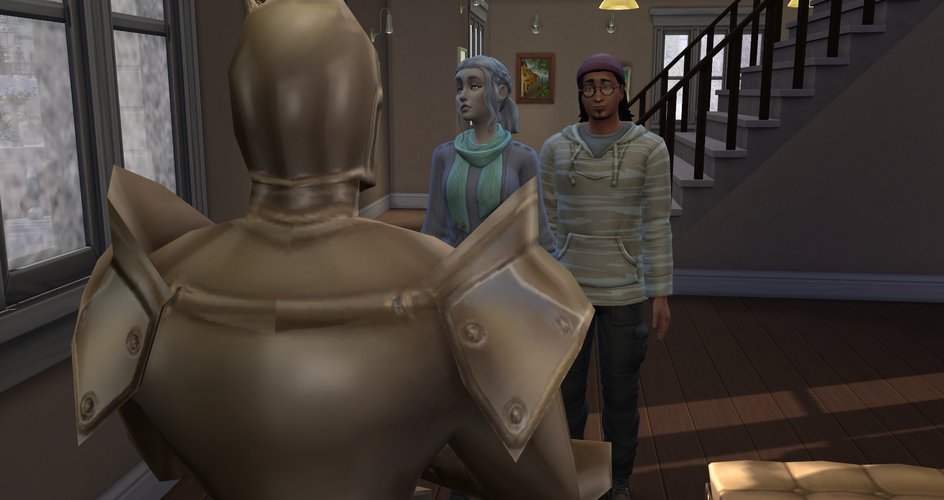 Time for the solo date! And, as you can see, the lucky winner was Rodrigo.

Rodrigo: What a wonderfully well preserved suit of armour – I could look at it all day. I wonder how old it is.

I don’t think Galatea is enjoying the museum somehow. 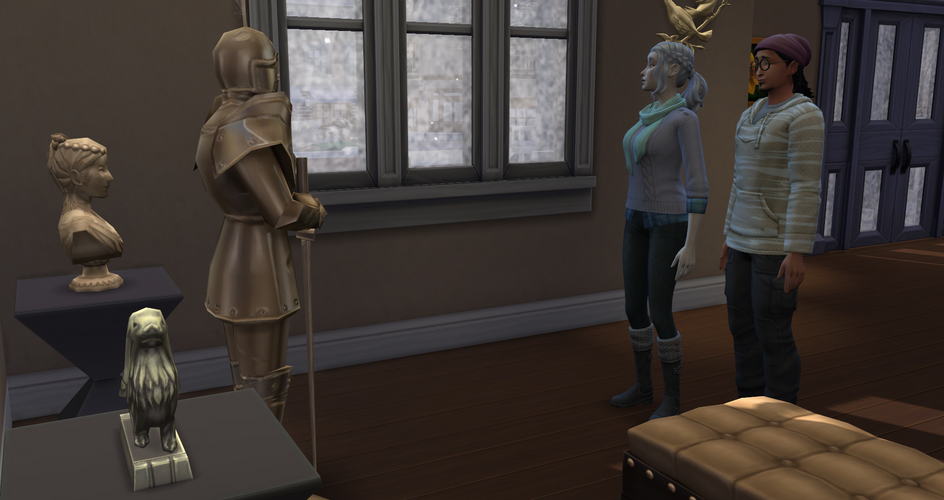 Rodrigo: Still not the prettiest face in the room, though.

Galatea: Huh? Have you been checking out some other girl in the museum? Not cool!

He was talking about you, dummy. 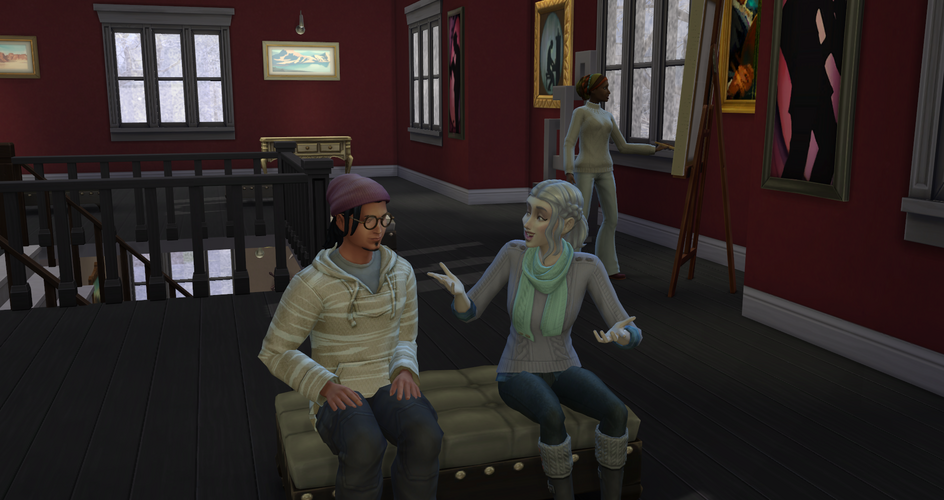 Galatea: So, you like all this old stuff, huh?

Rodrigo: Yes, there’s something so magical about looking at artefacts from hundreds or even thousands of years ago. It’s almost like time travel, don’t you think?

Galatea: Well, when you put it that way it certainly seems a lot more exciting.

Rodrigo: That’s why my passion is archaelogy. Nothing beats the feeling of digging up a find from a long forgotten culture, of being the first person to set eyes on it for perhaps two thousand years. 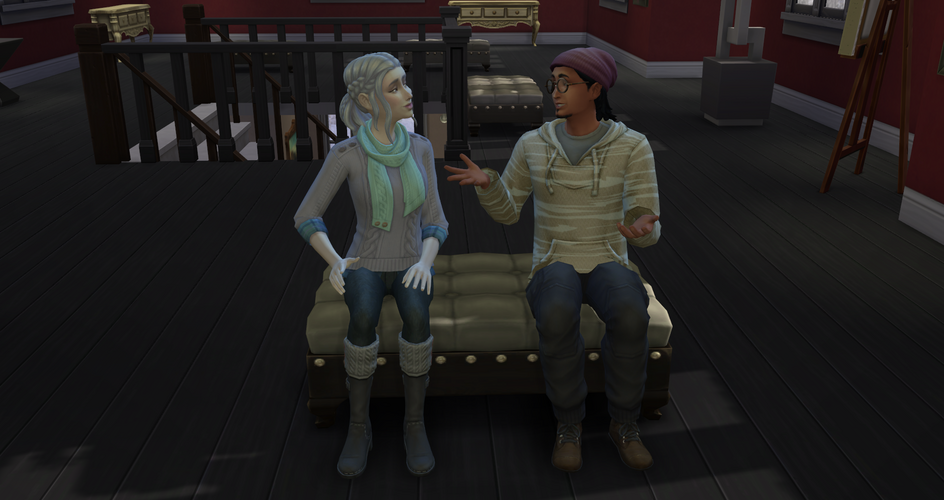 Galatea: Hmmm that all sounds very interesting but I bet you get just covered in dirt with all that digging. *Shudder* so gross.

Rodrigo: The rewards far outweigh the minor inconvenience of a bit of dirt. Consider: from, say, just one bronze Omniscan harvest knife you can learn so much: what materials the Omniscans worked with, what sorts of foods they foraged in the jungle for, how advanced they were in producing tools, even how sophisticated their artistic methods were. Learning these things helps me to feel more in touch with my Omniscan ancestors.

Galatea: The Omniscans? If I remember my history lessons correctly they hid all of their greatest treasures in tombs protected by lethal traps.

Rodrigo: That’s true. Tomb raiding is not for the faint hearted, but the treasures themselves are so beautiful that it is worth taking a risk to acquire them. A bit like another treasure I can think of…

Is he talking about Galatea? Bit cheesy but still cute!

Note: I know that Rodrigo is more into exploration of the jungles and tombs and such but I figured that a love of archaeology would go along with that 🙂 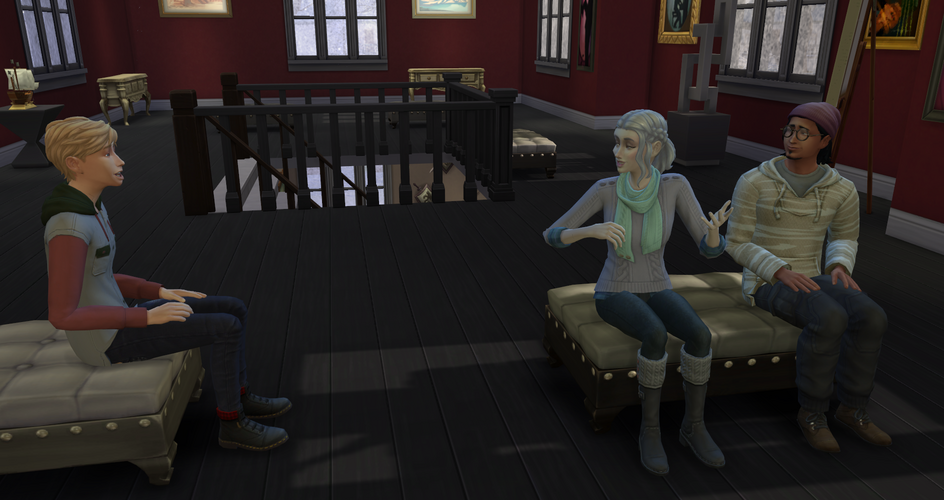 Galatea: Atlas, since when do you visit museums?

Atlas: This is a museum? Aww man now that explains why I couldn’t find the bar.

Galatea: I’m so sorry Rodrigo, this is my dumb little brother.

Rodrigo: Hi, nice to meet you.

Atlas: I like him, he seems like a real bro. So, is he the one you’re going to marry? 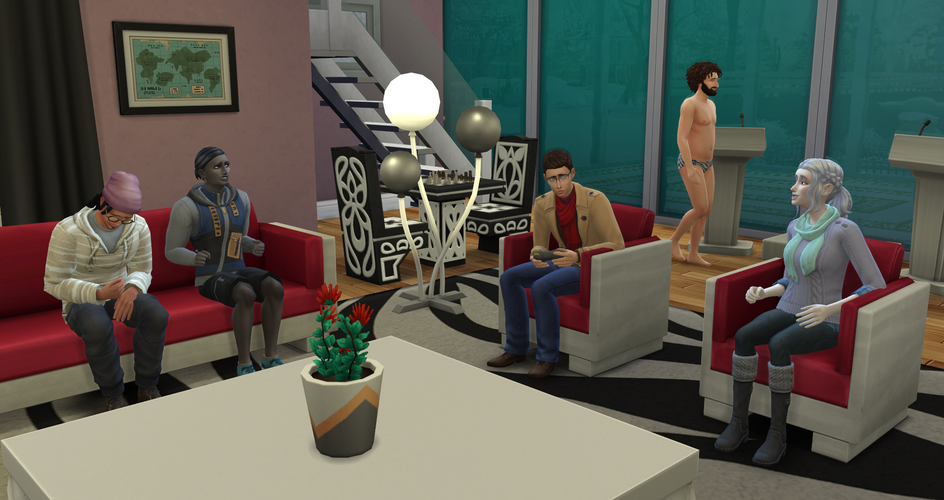 After the dates, I made Galatea drop in on the bachelor mansion and sit in the living room for a bit waiting for someone to talk to her.

Galatea: So Will, Rodrigo, I enjoyed our dates today…

Will: Can’t talk now, I’m about to win this game of Blicblock!

Maybe you should focus on winning Galatea’s heart instead.

Rodrigo: Is there some dirt under my nails? Oh man was that there on our date? I hope she didn’t notice… What if Galatea thinks that I have poor hygiene?

Gabriel: Maybe next time I can take you out and show you what a real good time is like.

Rodrigo: Hey, did he just insult us?

Also: Yul has the same speedos as Vlad and I am living for it! 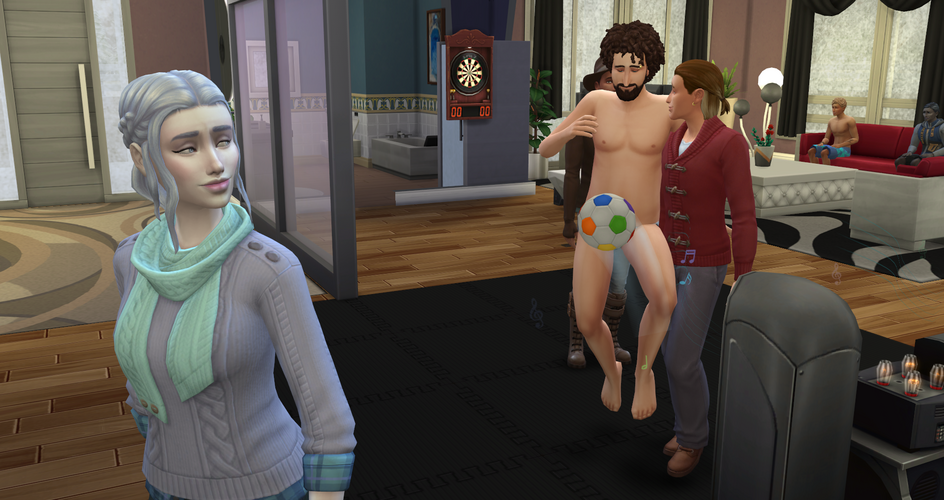 Galatea: Is he naked?

No but it sure looks that way from this angle! 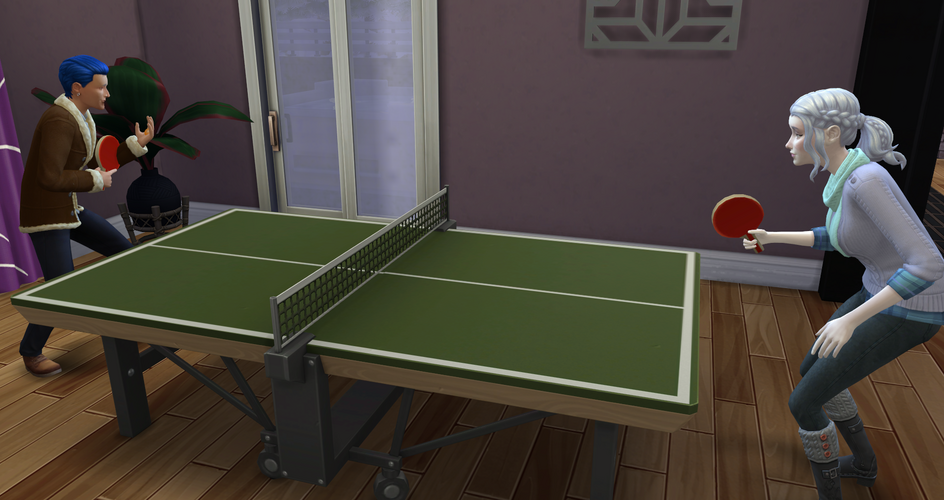 Then she chose to play table tennis with Bryon for a while.

Bryon: So, what do I win when I beat you?

Galatea: I don’t know, what do you want?

Bryon: How about a kiss?

Galatea: I think it’s a bit early for that. 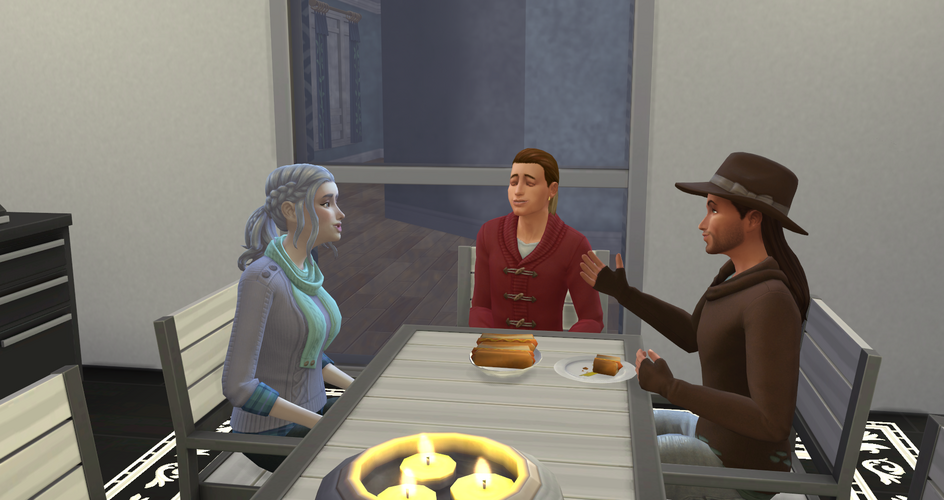 Galatea: Michael, Jude, I’ve called you both here this evening because unfortunately one of you is going home.

Michael: Why call both of us, then?

Galatea: Well, it adds to the suspense. Also, I thought that the person leaving might like a bit of moral support. And the person going home is… 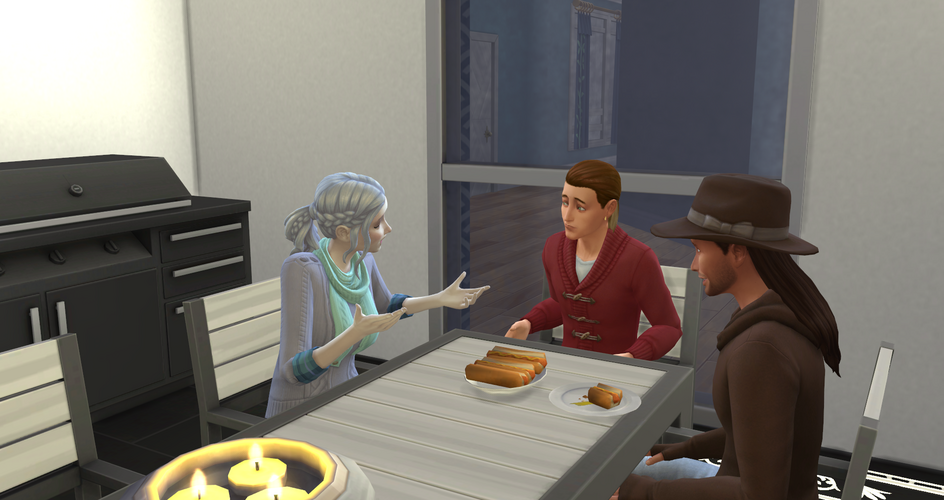 Galatea: … Jude. I’m sorry, you’re a very sweet guy but I just don’t see it working out between us. Maybe it’s because you’ve already had bad experiences with vampires so I don’t think that you deserve to be treated as a walking plasma pack by my Dad which, to be frank, might very well happen.

Jude: It’s ok, I understand. It’s been great meeting you, even if it was a short-lived acquaintance.

Dude, you’re meant to be offering consolation, not rubbing things in Jude’s face.

By the way, the reason why Michael was here as well was because he turned up and sat down just as Galatea was about to give Jude the bad news.

In case anyone was interested, here are the scores for the football challenge (ordered from worst to best): 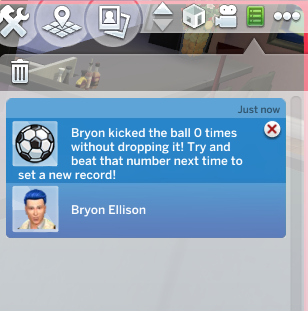 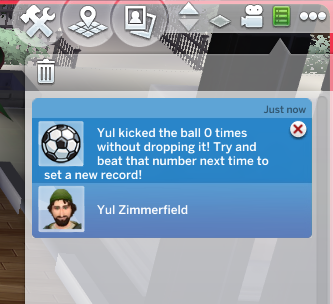 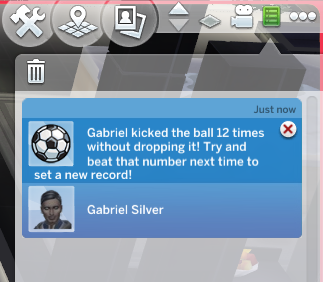 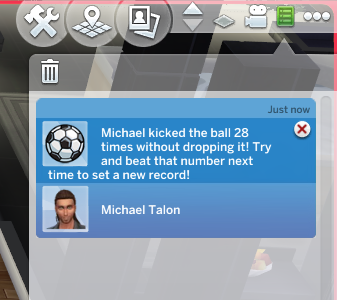 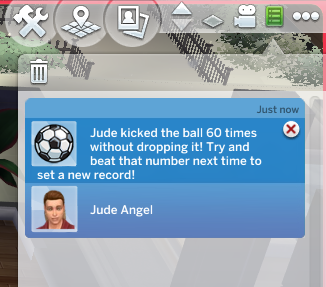 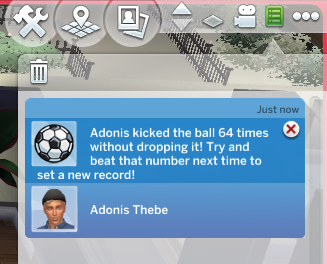 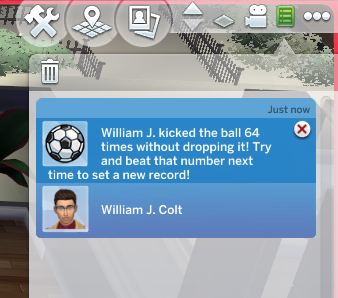 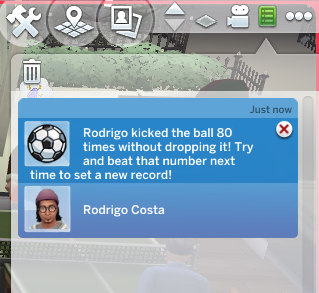 I’m sorry that Jude had to go so early on, RL. I’m sad not to be able to play with him longer 😦