Hello and welcome to the first day of the gen 2 bachelorette. Today, Galatea will meet her future husband. But, which of the eight hopeful men will he be? Only time will tell! 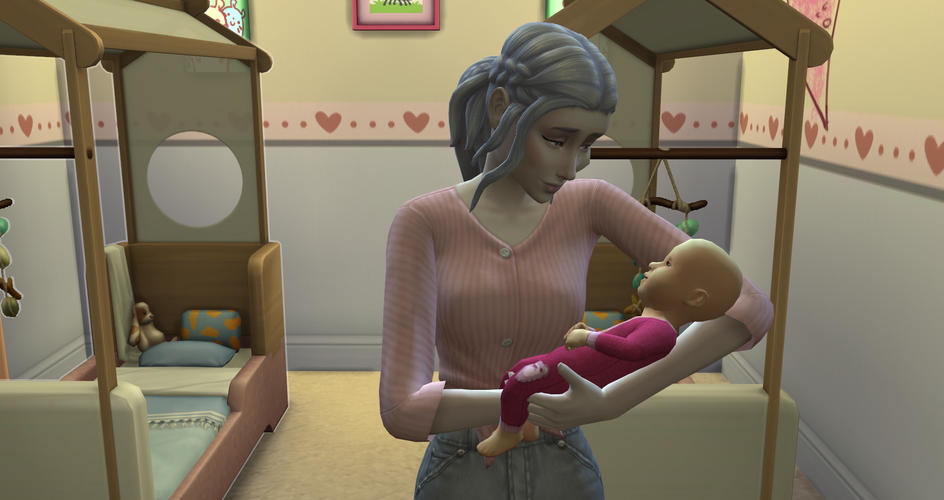 Galatea: I love you so much, Clementine. I’ve got to go away for a little while and I will miss you every day. But, I’ll come home with a new Daddy for you.

Galatea: I can’t believe you’re making me leave my newborn daughter now. I only gave birth a few hours ago, I’ve hardly spent any time with her at all.

She’s a baby. She’ll just lie around and cry a lot, you won’t be missing much.

Side note: Since I switched off aging for played and unplayed households for the bachelorette part, Clementine will still be a baby by the time Galatea gets back to her.

Oh also, the pink onesie (I think it’s officially red but tbh it looks pink to me) that Clementine is wearing was knitted by Vlad. 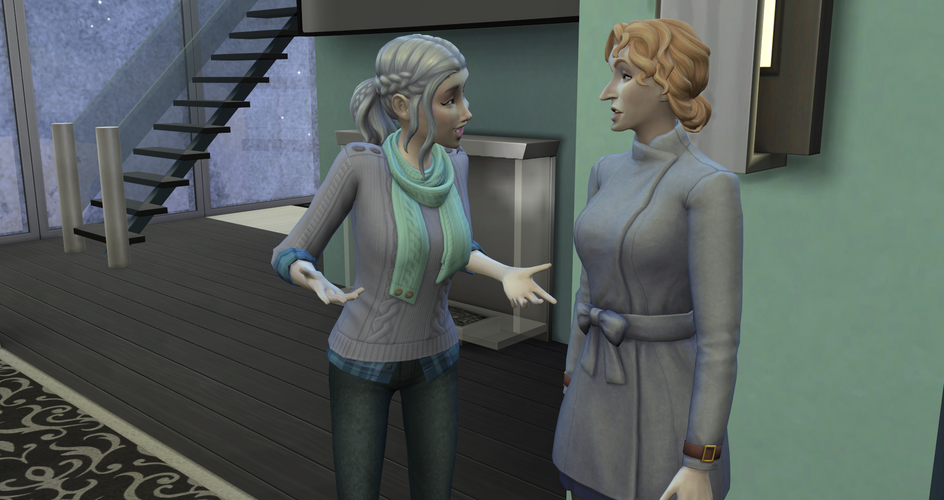 Since there are 8 men contending for Galatea’s hand, there wasn’t room for Galatea in the bachelor mansion. So, I had her move in with Circe who has done very well for herself – she is married to the son of Lily and Victor Feng and lives in a huge apartment in San Myshuno.

Galatea: Thank you so much for inviting me to crash here for the first two days of the bachelorette.

Circe: Actually I’m pretty sure you invited yourself but sure, why not? I could do with having my nose rubbed in the fact that I lost the heir poll – my long, pointy, hideous nose…

By the way, this is Galatea’s new cold weather outfit. The jumper was knitted by Vlad and I really love it on her. 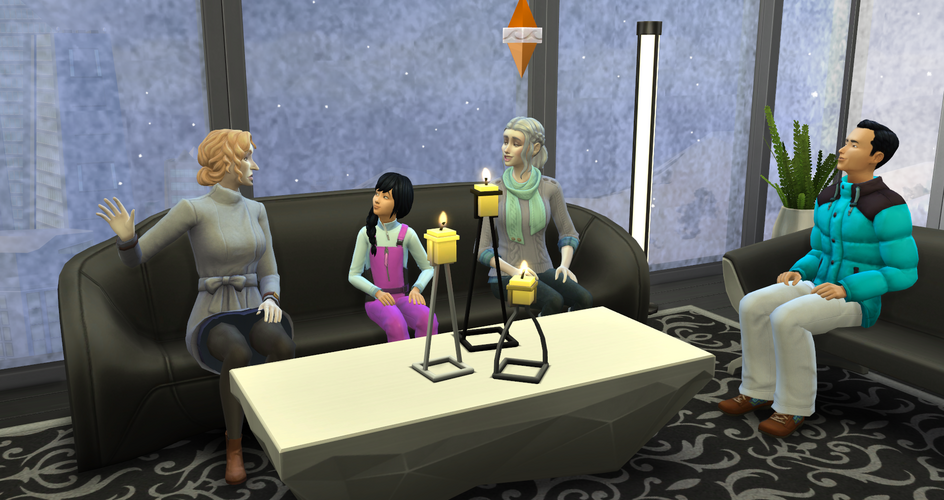 Circe: Galatea, this is my husband, Kristopher and my sister-in-law, Zoe. By the way, thank you so much for coming to our wedding. I really appreciated it, so thoughtful of you.

Galatea: But I didn’t come to your wedding.

Ok so now on to the part everyone actually cares about 😉 – Galatea meeting the guys. She spent exactly one hour with each of them. 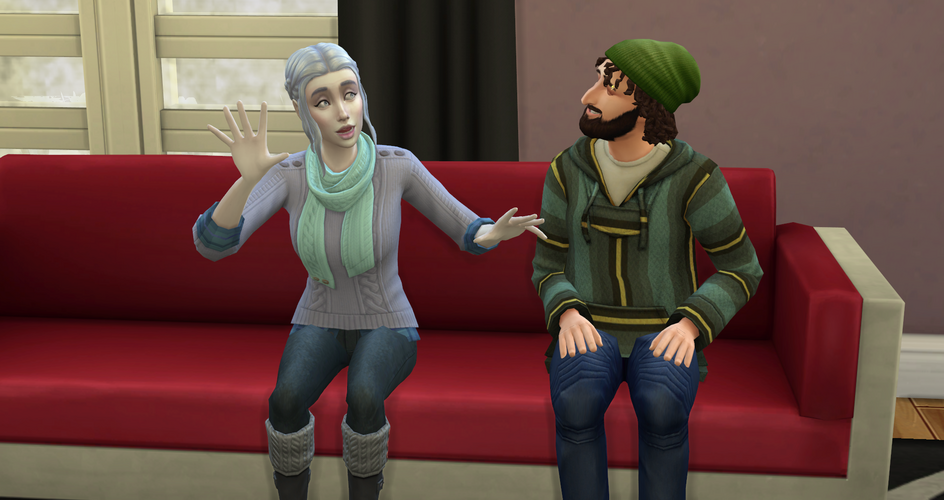 First up, Galatea introduced herself to Yul Zimmerfield by Vanpelt81.

Yul: Hello, My name is Yul…

Galatea: Hi Yul, I’m Galatea, sorry if I’m a little nervous it’s just that you’re the first guy I’ve talked to – not the first guy I’ve ever talked to obviously, that would be silly – I talk to my Dad and brothers all the time but that’s different you know and speaking of my Dad you remind me of him somehow – I think maybe it’s the nose? – plus my ex was obviously a guy who I talked to but I shouldn’t bring him up so early on… Except of course I have now. Oh no, I’ve got verbal diarrhea haven’t I? And now I’m talking about diarrhea in front of my possibly-future husband… And calling you my possibly-future husband makes it seem like I’m moving way too fast. I think I need to shut up. And breathe, I need to breathe. 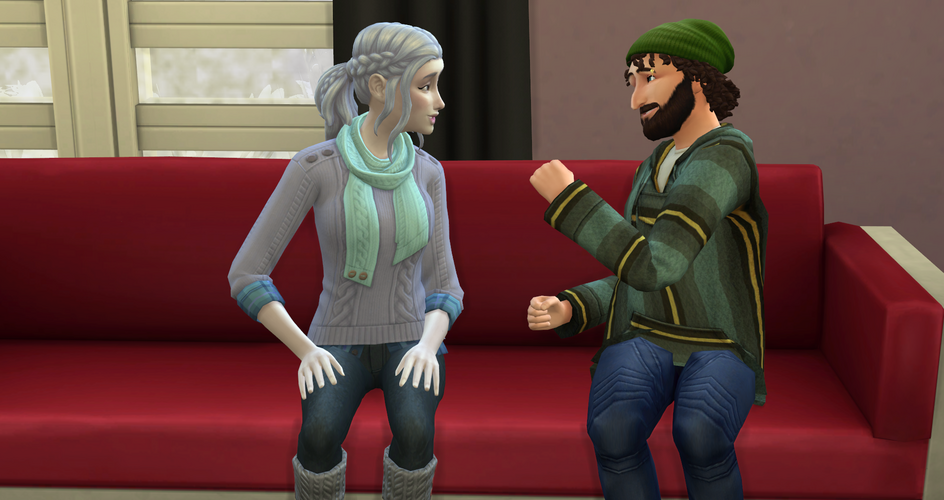 Yul: Hey, it’s ok. I’m nervous too. I’ve had a rough time with relationships so this is a big deal for me.

Galatea: Thank you for understanding. I guess we have something in common because I just came out of a pretty bad breakup. My ex-boyfriend cheated on me.

Yul: My ex-fiancé cheated on me too. You think you know someone and then… You find out that she’s screwing your sister.

Galatea: I’m so sorry. That must have been awful for you!

Yul: Oh it wasn’t so bad – only broke my heart, tore apart my family, shattered my already fragile self esteem, destroyed my ability to trust and necessitated years of intensive therapy. Nothing major! 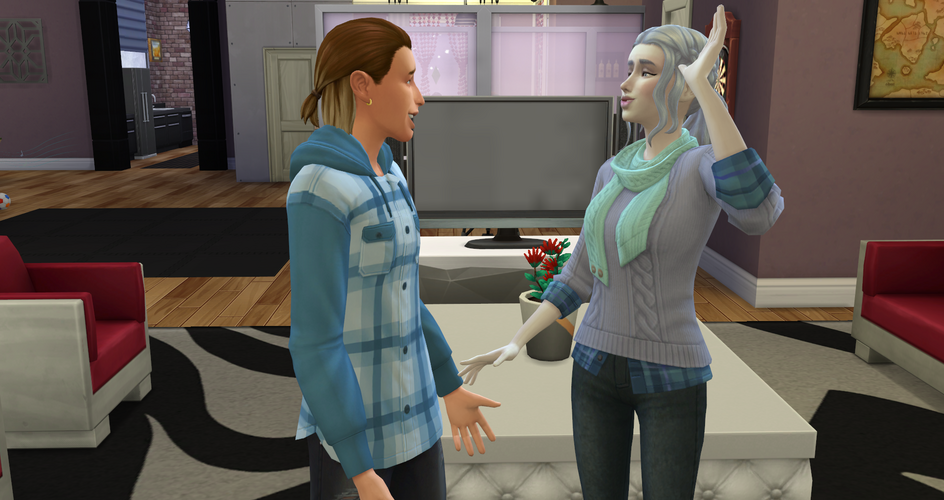 Ok Galatea, try not to embarrass yourself so badly in front of guy number 2 (Jude Angel by RL). Just say: Hi, I’m Galatea and stop there.

Galatea: I meant um let’s sit down on this sofa here.

You may be able to see a plaster wall in the background of this screenshot. That’s because I temporarily walled off the kitchen area so that I could lock the waiting guys in it. I know I could have just turned off free will but I wanted free will on so that Galatea and the guy she was talking to had the opportunity to autonomously choose to do certain interactions if they wanted. 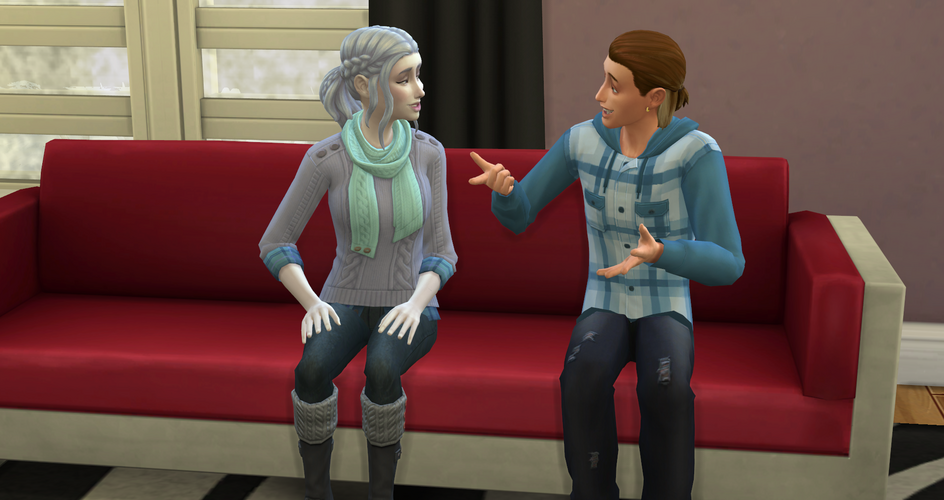 Jude:  Forgive me for asking but are you a vampire? It’s just that your skin is so pale.

Galatea: No, actually I’m a mermaid. But, my Dad’s a vampire and I inherited his pale skin. So, how come you’ve heard of vampires? Most mortal sims don’t even know that they exist.

Jude: A mermaid huh? How cool, I’ve never met a mermaid before. Well, I grew up in Forgotten Hollow so I’ve come across a lot of vampires. My Mum used to sell her plasma to them, it was the only way she could afford to pay the rent on our house. I wonder if your Dad was one of her clients.

Galatea: Haha I doubt it, Dad would never pay for his plasma. 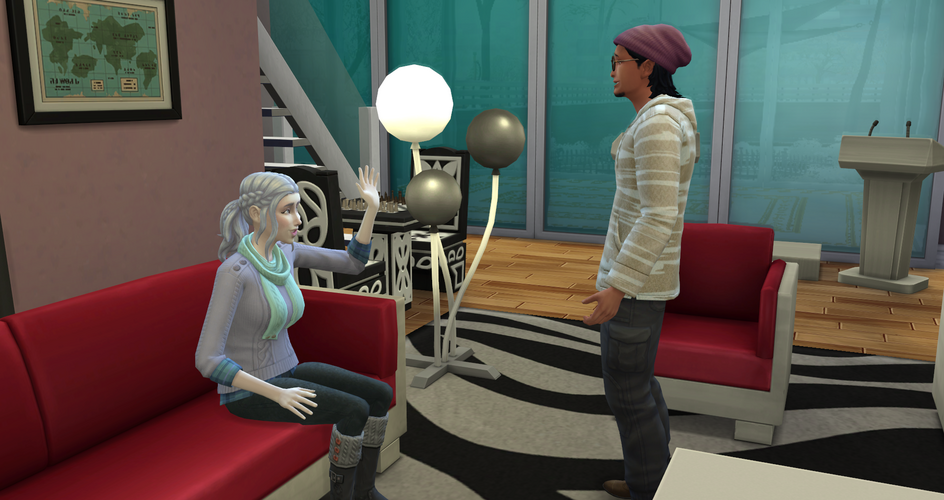 Next it was the turn of Rodrigo Costa by MonaSolstraale to meet the lovely bachelorette. 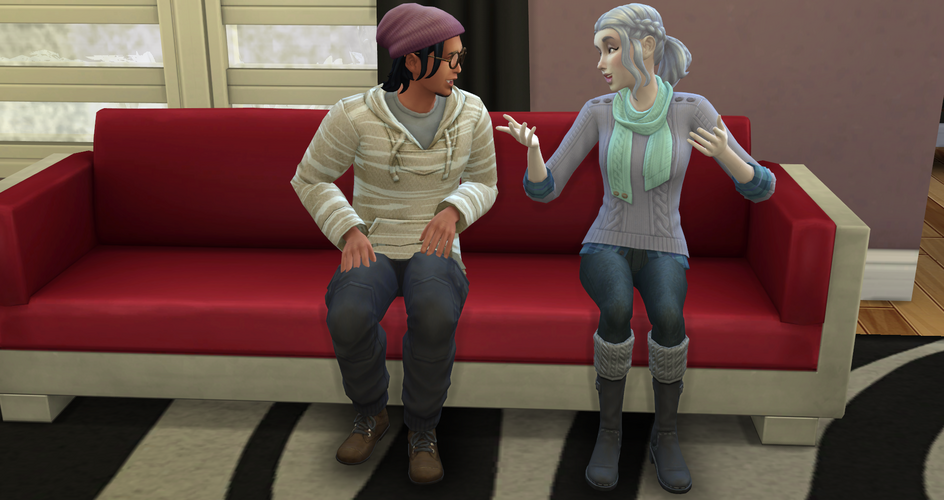 Galatea: So, how do you like the bachelorette mansion. It’s pretty luxurious, right?

Rodrigo: It’s definitely luxurious and I don’t mean to sound ungrateful but honestly I’d prefer to be camping under the stars in the rainforests of Selvadorada.

Galatea: Selvadorada? But aren’t there lots of creepy crawlies there?

Rodrigo: Yes. Creepy crawlies, snakes, vampire bats… Once, I was lying in my sleeping bag looking up at the sky when a spider the size of my fist jumped onto my face.

Galatea: Ok, I’m gonna stop your right there before I puke. 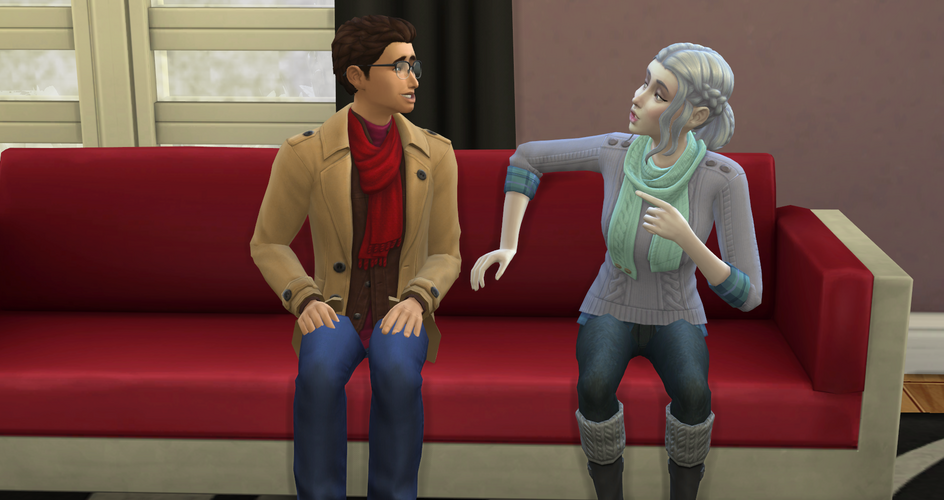 Here we have William J. Colt by Queenarella.

Will: My name’s William, but you can call me Will for short. 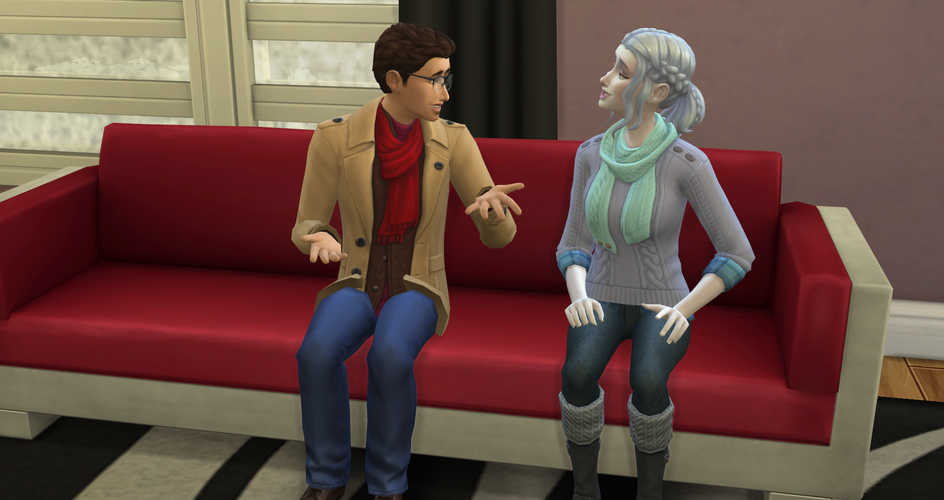 Galatea: So, Will-for-short, tell me about yourself.

Will: Let’s see now. Well, I hope to be a successful businessman some day, maybe even the CEO of my own company.

Will: I suppose. How else am I gonna make the big cash?

Galatea: And you’d spend that cash on me if we were married, right? 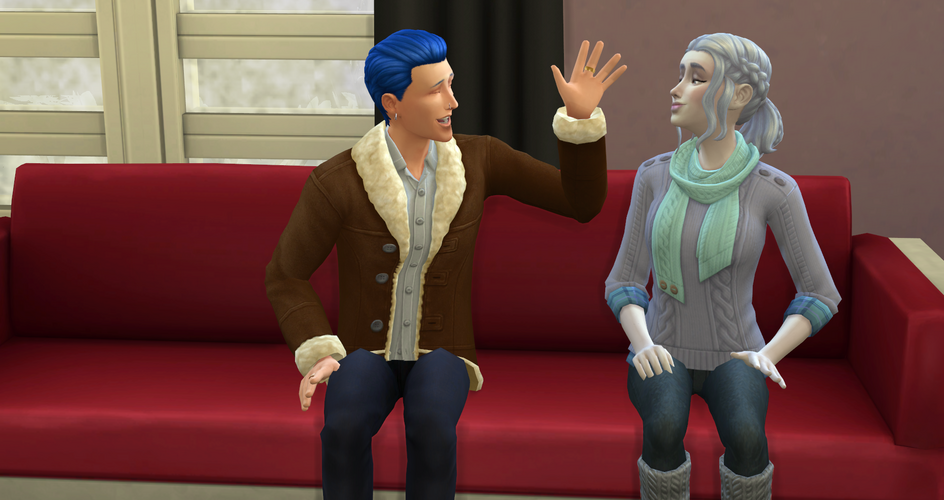 This blue haired gent is Bryon Ellison by Skeilah.

Bryon: Hello beautiful! The name’s Bryon, Bryon Ellison. Better send the other guys home because now that you’ve met me you won’t be able to look twice at anybody else.

Galatea: You don’t even know my name yet.

Bryon: Sure I do, Mrs Ellison. 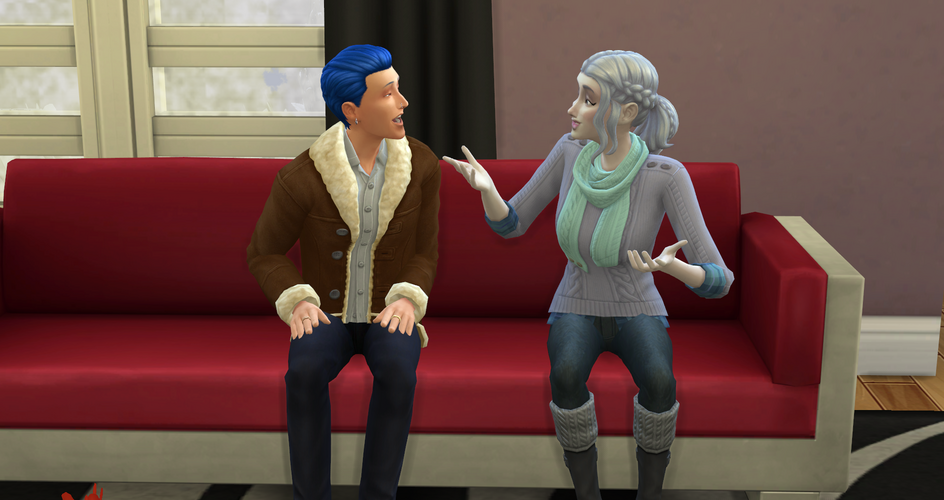 Bryon: Whatever you say, gorgeous.

Galatea: Right… Anyway, I’m Galatea. I really like your hair. Is it natural or dyed?

Bryon: Why? Are you wondering whether our children will inherit it?

Galatea: Um no, I wasn’t thinking about that at all actually.

Bryon: Of course you weren’t, darling. 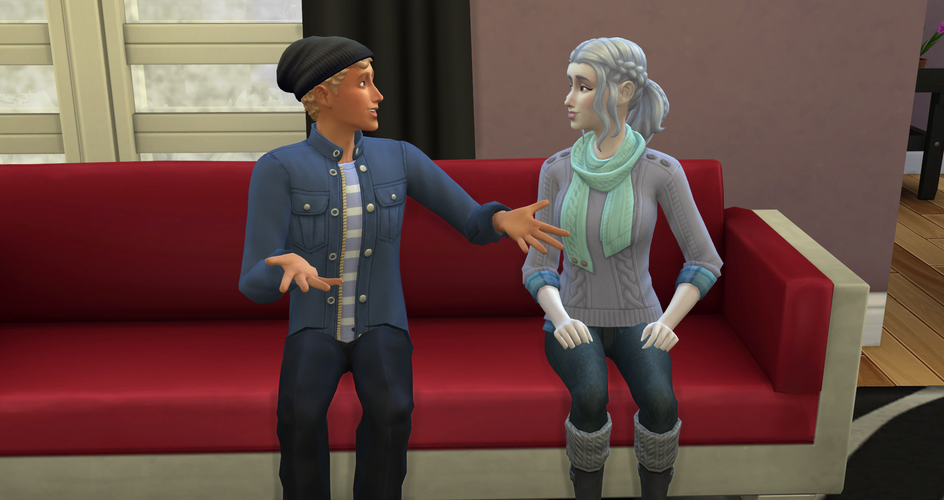 And here Galatea is making the acquaintance of Adonis Thebe by afai1261.

Galatea: Hello, I’m Galatea. And who might you be? 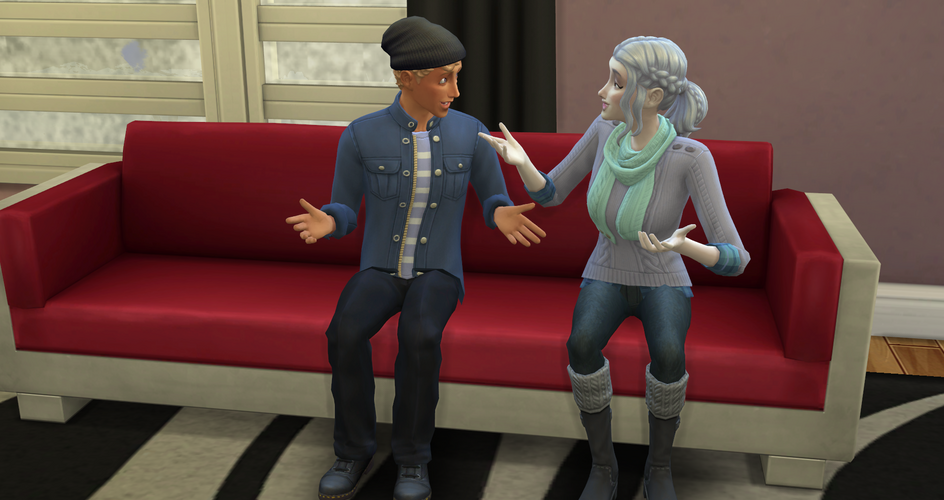 Adonis: So, I hear that you’re a fellow mermaid.

Galatea: Fellow mermaid? You mean you’re a mermaid too?

Galatea: That’s awesome! We should swim together some time and – oh my gosh your eyes are so pretty – erm, not that I’ve been staring into them or anything. Are they really purple or are you wearing contacts?

Adonis: No contacts. I inherited my mother’s purple eyes. And for the record, I think your eyes are very pretty too.

Galatea: You do? Most people think my eye shape is a bit weird – I have my Dad’s small irises. 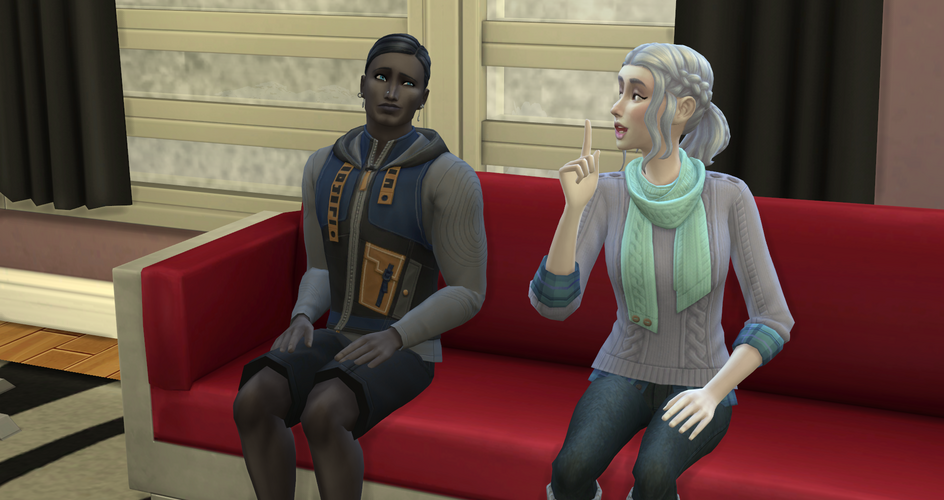 Here we have Gabriel Silver by pammiechick.

Gabriel: Haha don’t worry about it. I’m called Gabriel but feel free to call me muscles if you want – it’s kind of funny.

Galatea: I think I’ll just stick with Gabriel for now. 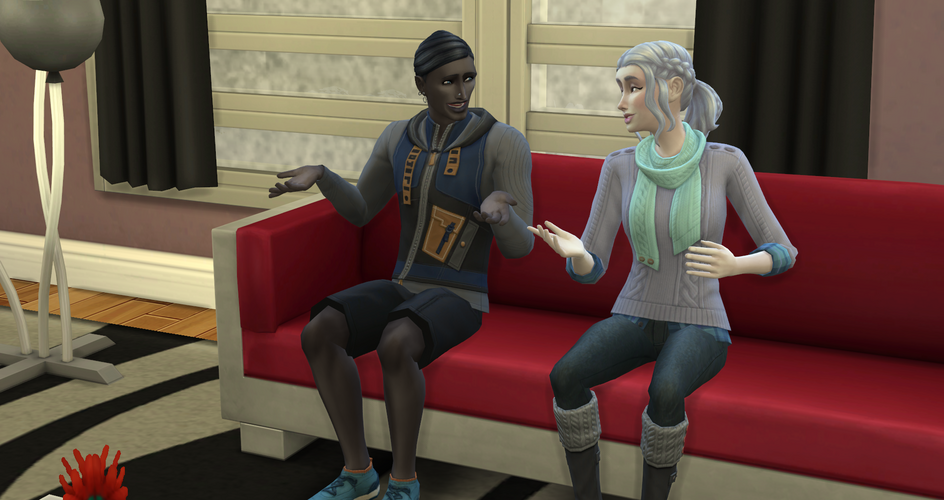 Galatea: So, what made you want to enter this competition musc – I mean, Gabriel?

Gabriel: My father never much cared for me and I was tired of him constantly belittling my suggestions for how he could improve his estate’s sustainability and reduce its eco footprint. So, I decided to leave home and look for my mother who disappeared when I was just a child. I had tracked her down to these parts when the trail ran cold. But then I saw the advertisement for your bachelorette and I guess it just seemed like fate.

Galatea: It sounds like you haven’t had a great family life. But, you shouldn’t lose hope. Maybe you will be reunited with your mother one day after all. 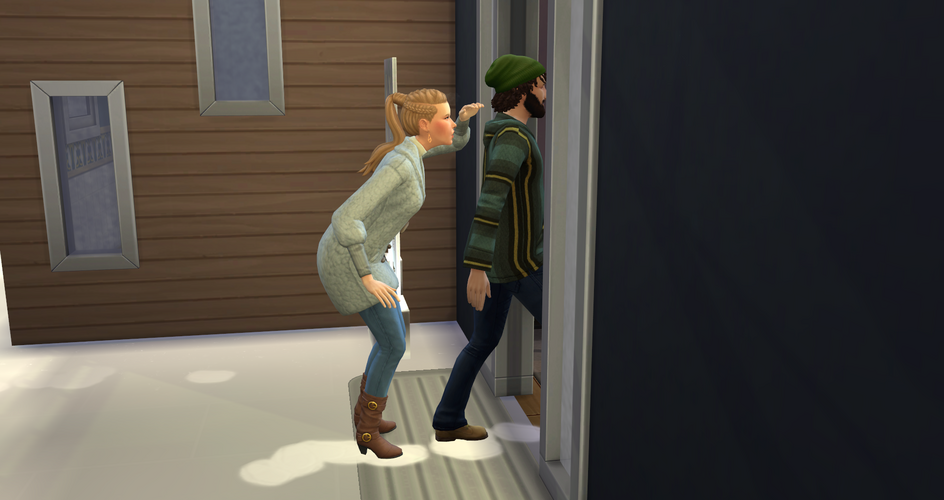 Caly: So, what are the contestants like? Are any of them worthy of my Galatea?

Hang on, if you’re here, who’s looking after Clementine? Please don’t tell me you left Vlad in sole charge of her.

Caly: Of course not, do you think I’m an idiot? Dad’s taking care of her.

Oh great, the baby is being cared for by thin air. CPS are definitely going to take her… 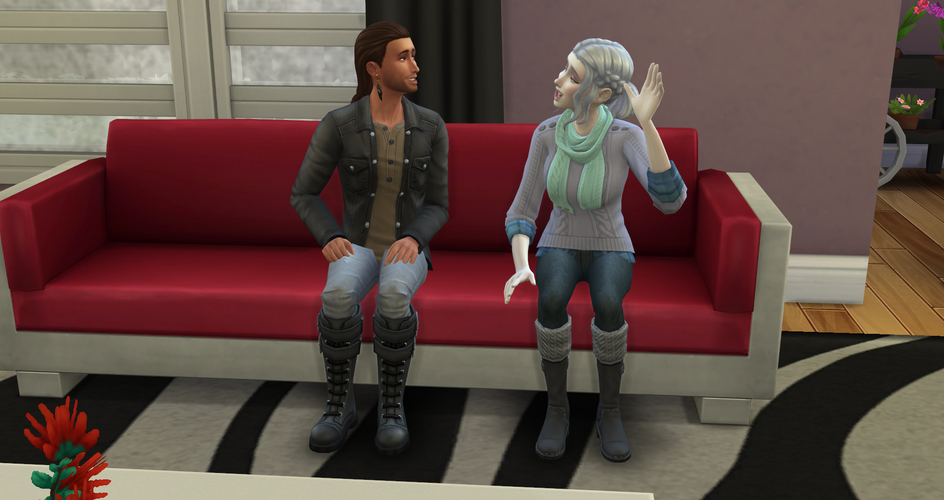 You are not tired. I’ve been cheating your needs up!

Michael: It’s ok, I understand. It must have been a long day for you! I’m Michael, nice to meet you. 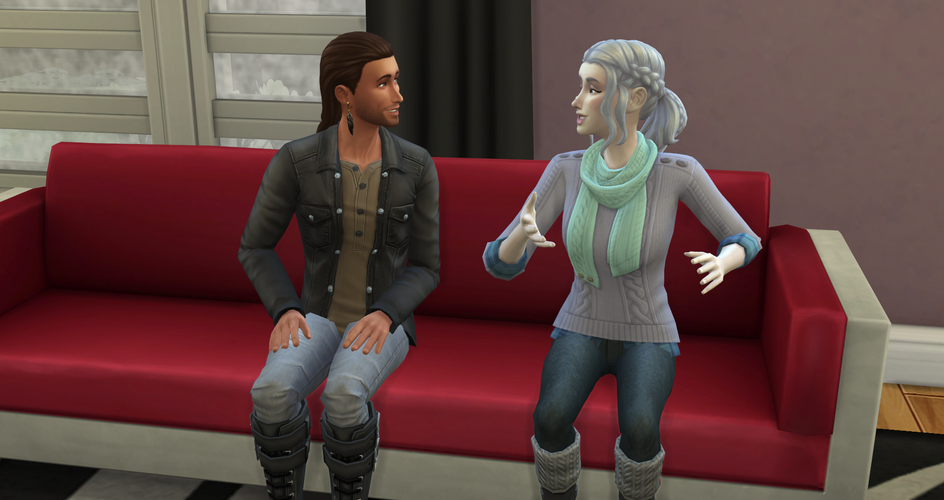 Galatea: So, Michael, where do you come from?

Michael: I live in Brindleton Bay but I spend a lot of time at my brother’s place in Glimmerbrook.

Galatea: Glimmerbrook? Is it true what they say, are there spellcasters there?

Michael: Absolutely. Rafael – that’s my brother – he’s a spellcaster and I guess so am I. He’s been trying to teach me magic but so far I only know the basics.

Galatea: How awesome! Just promise not to slip me a love potion, ok?

Michael: Don’t worry, that might be in Rafael’s line but it’s not in mine. If we end up together I want it to be because you chose me of your own free will. Real love is so much more meaningful than the kind you can whip up in a cauldron, you know? 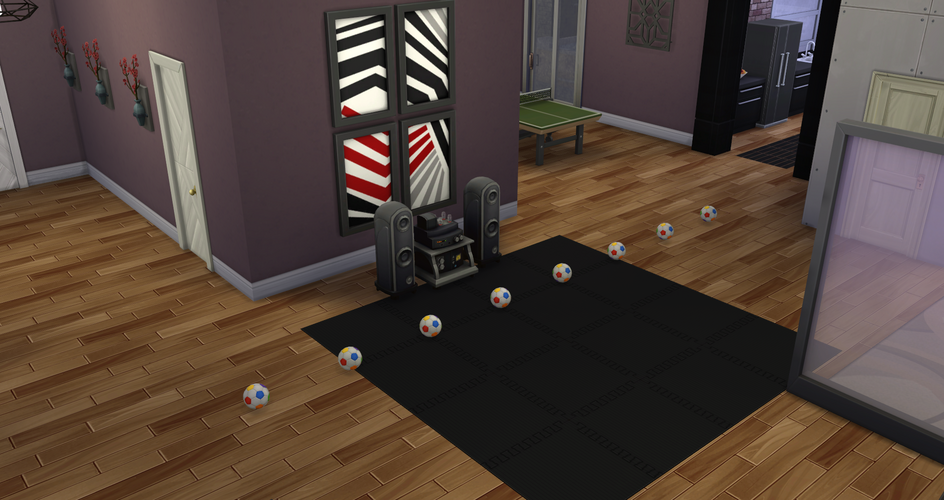 With Galatea gone, it was time for the guys to take on their first challenge: football. The one who kicks the ball the most times before dropping it wins a solo date with Galatea tomorrow (tomorrow in sims time, not tomorrow irl – sorry!) The two runners up will go on a group date with her.

I made everyone do this at the same time but some managed to start a little earlier than others so if you see someone not kicking a ball in one of these screenshots it is because they haven’t started yet rather than because they already failed. 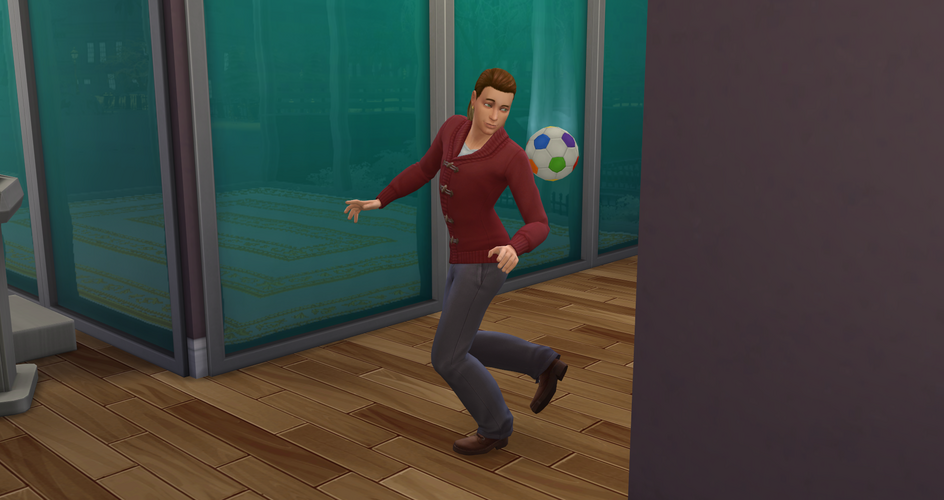 Here’s June kicking his ball. Ouch that sounds painful, how can I make these descriptions sound less weird? 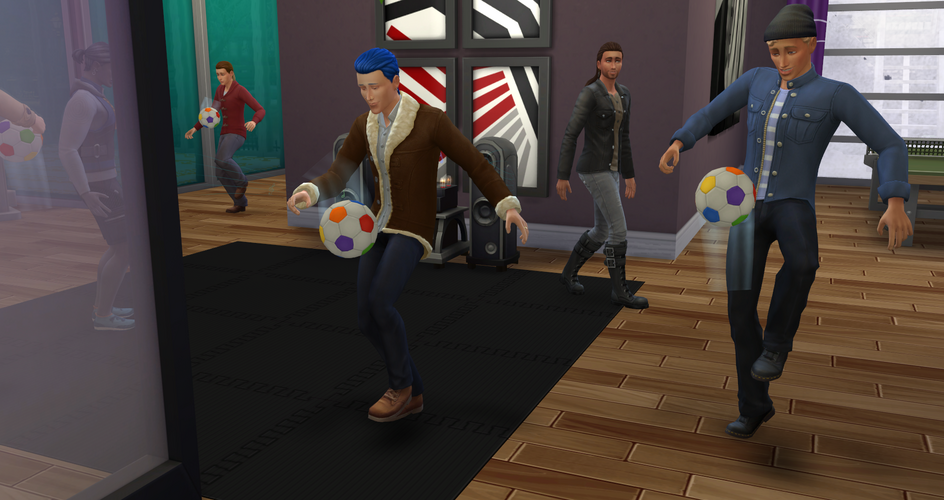 I thought I had individual shots of everyone but turns out I don’t have individual screenshots of Bryon and Adonis so this one of them together will have to do.

Bryon: Give it up mermaid-boy. Galatea and I have a special connection. The rest of you don’t stand a chance!

Adonis: Really? Because it sure as hell didn’t seem that way when she was gazing into my eyes earlier.

Michael: Ha, they’re both wrong! She made it quite obvious that I’m her favourite. 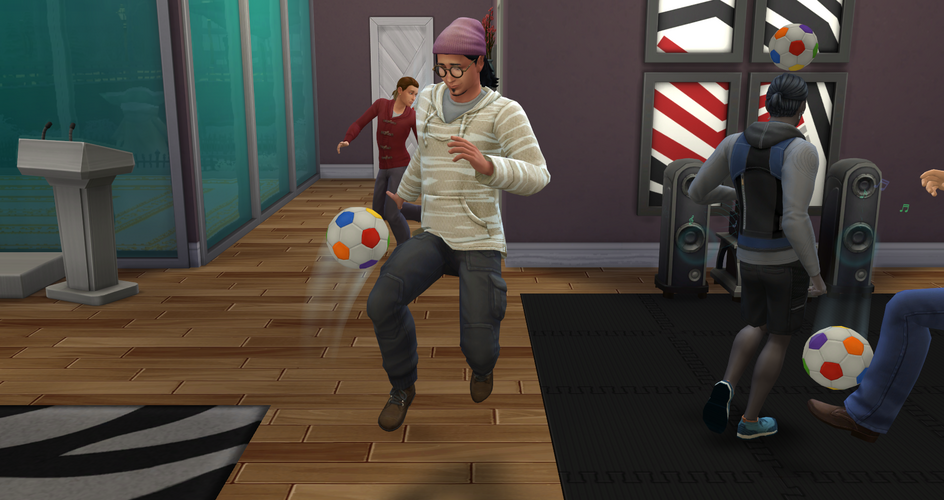 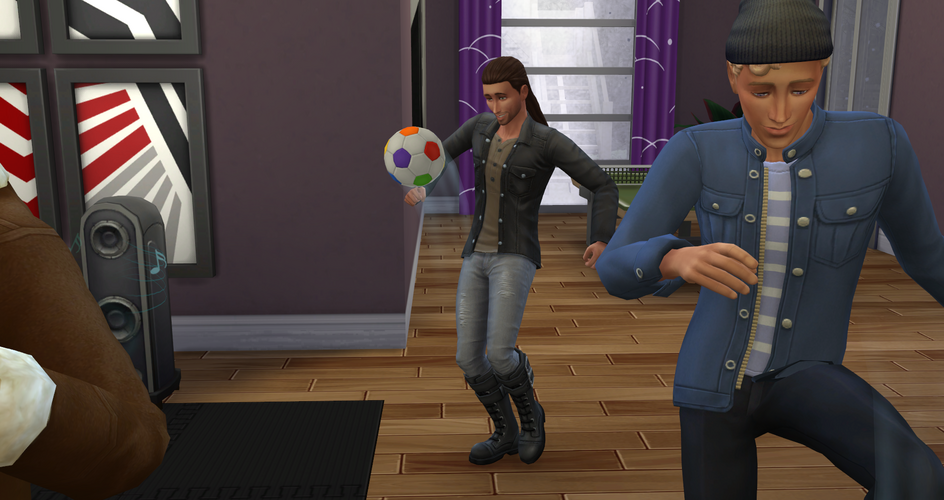 Michael: If only I knew the right spell to make this ball float… 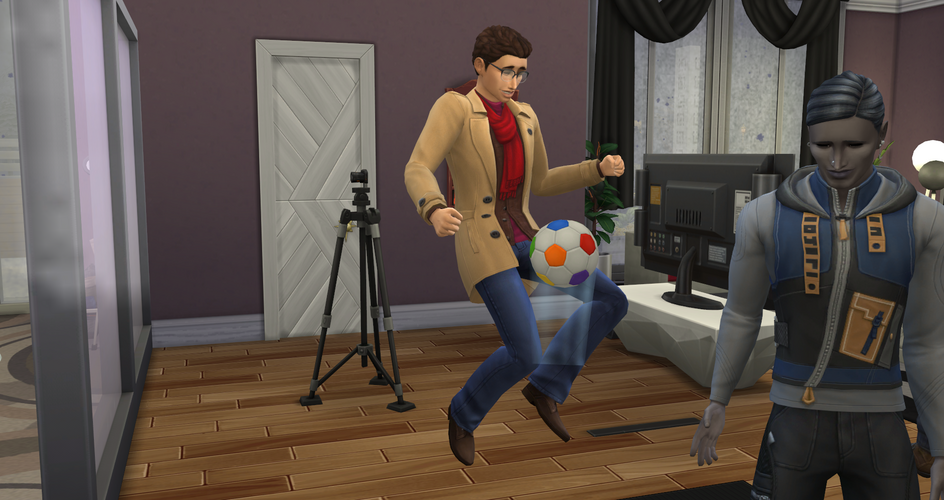 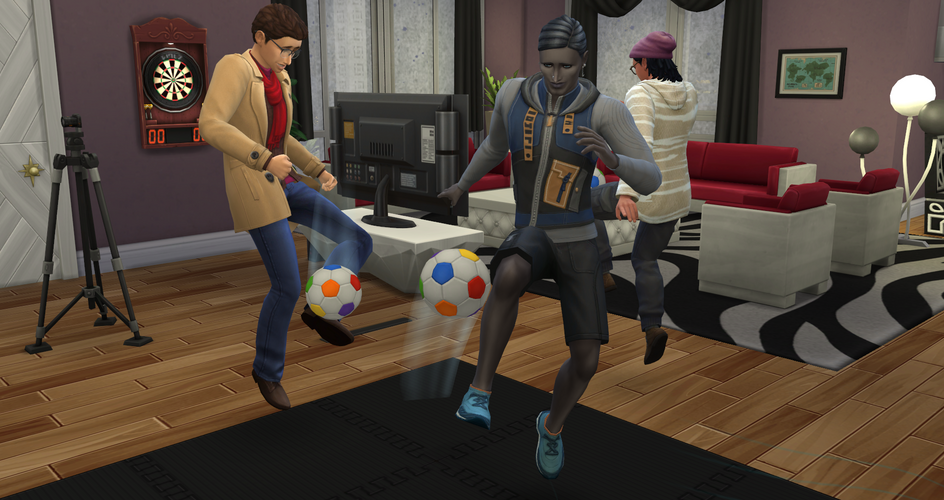 Will those muscles give Gabriel an advantage in this challenge or will they weigh him down? 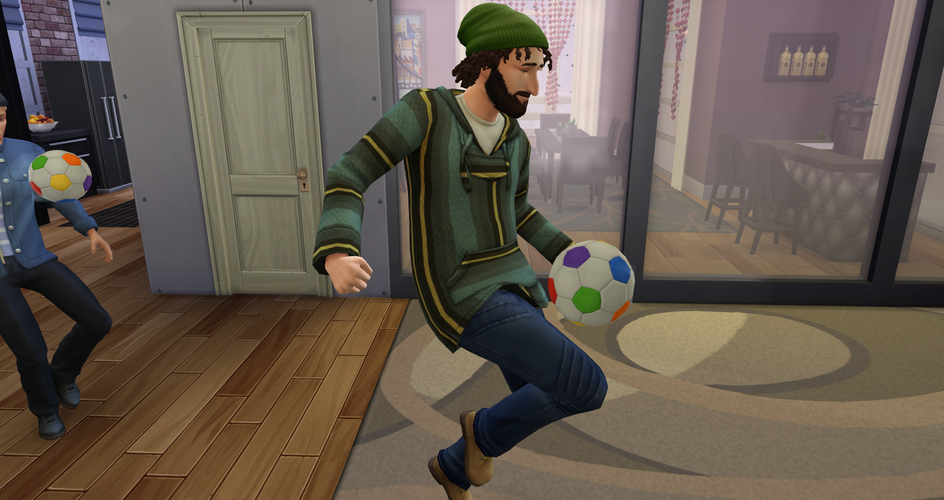 Ok but does anyone think that Yul has a really cute face? There is something so endearing about it.

So, which lucky boys won dates? Find out next chapter!

PS. I really shouldn’t have done a challenge in addition to meeting all the guys this chapter. The chapter ended up way too long, didn’t it? Sorry if you got bored and went to sleep!