Hello and welcome to the penultimate chapter of generation 1! After this, there will only be one more chapter before the bachelorette.

I have opened the casting thread on the forums for bachelorette. You can find the thread here.

In the previous chapter, Galatea narrowly avoided death by burning… And then death by freezing, Atlas continued to work on his aspiration, Galatea went on a second date with Dana and they woohooed for the first (and probably only) time, Circe completed the bodybuilder aspiration before becoming a YA and moving out whilst Caly completed the fabulously wealthy aspiration and began the angling ace aspiration. 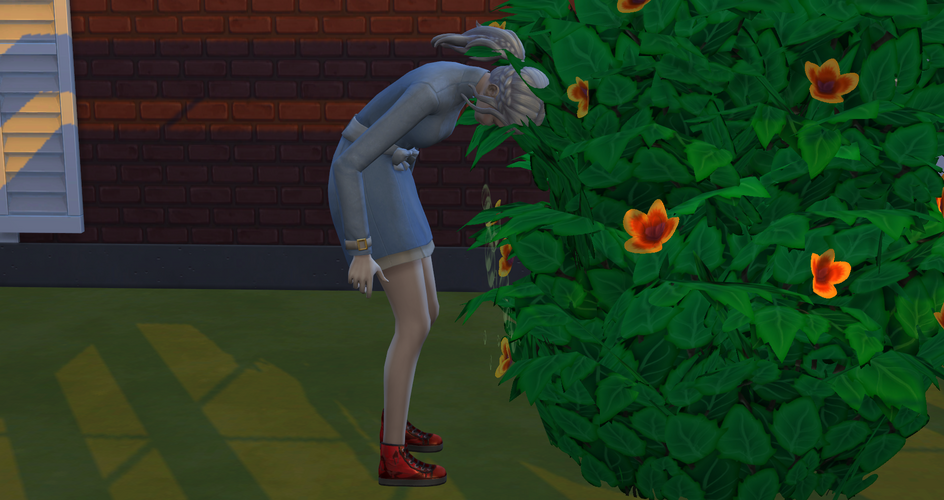 Why not begin this chapter with a nice shot of Galatea puking her guts up in a bush?

Galatea: Ew ew ew throwing up is so gross… Just the thought of it makes me feel like vomiting again.

Did you eat one of those bowls of spoiled half-finished garden salad that are lying around the house? Because if you did this is totally your fault for not practicing basic food hygiene.

I don’t believe you.

Also, I do not remember giving you those red shoes. 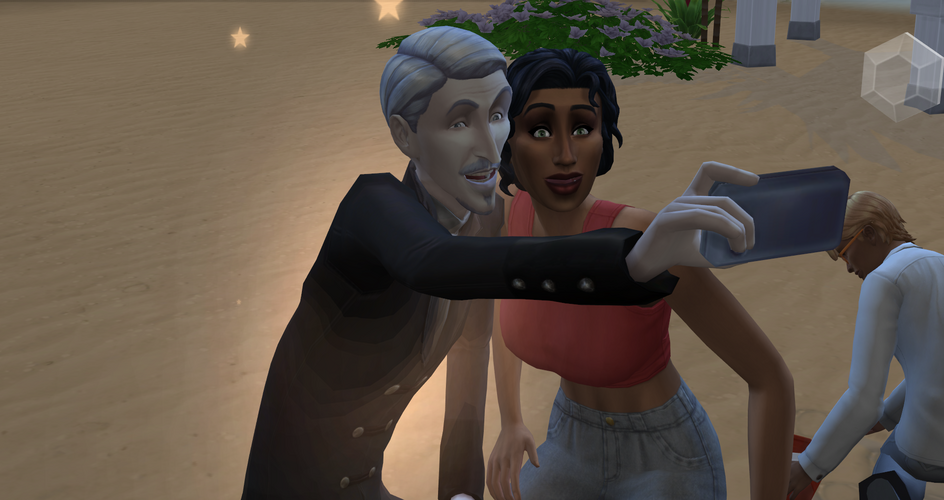 For his aspiration, Vlad had to be good friends with all 5 of his vampire offspring. He was already friends with them thanks to the ‘instant besties’ introduction so I only had to make him take a few pictures with each of them in order to make them into good friends.

By the way, they’re in Sulani because I wanted Caly to fish there (I’m working on completing the fish collection and a lot of fish seem to only be found in Sulani). As you may remember from two chapters back, Vlad is now immune to sunlight. But, his offspring aren’t and I stupidly forgot that when I had him travel to Sulani with them. Thankfully however, it was a cloudy day so none of them burned.

Anyway, here he is taking a selfie with Tracey Flex who is so beautiful.

WARNING! FORTHCOMING SCREENSHOT MAY BE DISTURBING TO SOME READERS, VIEWER DISCRETION IS ADVISED.

Specifically, the next screenshot is of Vlad in speedos (which, I want to point out, is his default swimwear – I didn’t choose it for him!) and I know that Karababy52 can’t stand the sight of that so I thought I should put a little warning before the screenshot so that if she and any like minded people read this chapter, they can skip past the next image 😉

Vlad: How dare you insult me like that? Caly says I look sexy in my speedos. 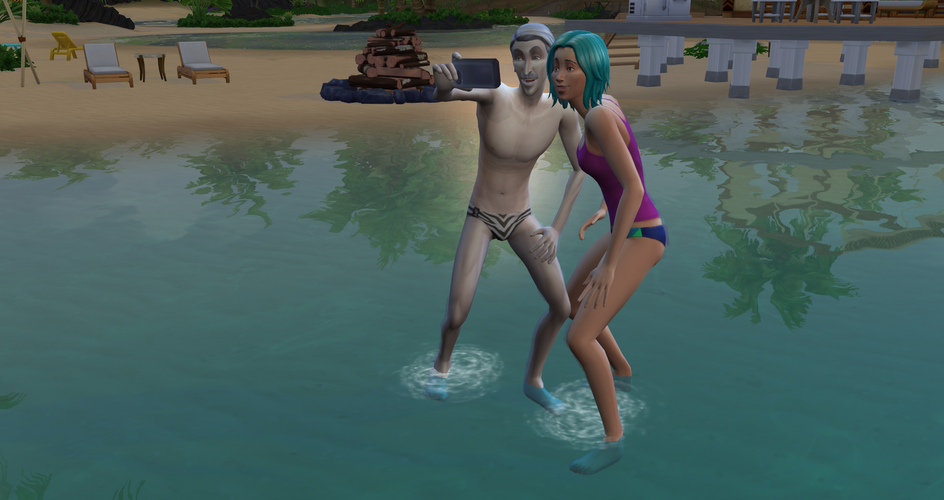 Yuki: Then what do we say? 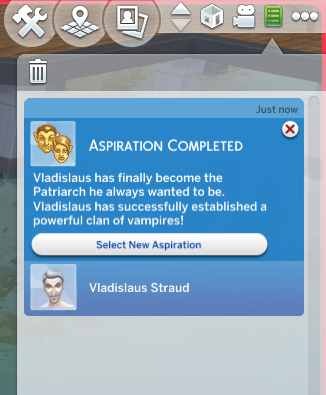 I really want Vlad to do the ‘Lord of the Knits’ aspiration which comes with Nifty Knitting because the thought of Vlad knitting is too funny. Maybe I will end up buying the pack on release just for that.

Comment by future me: I did buy the pack on release and as you will see later in the chapter, I did give Vlad this aspiration 😀 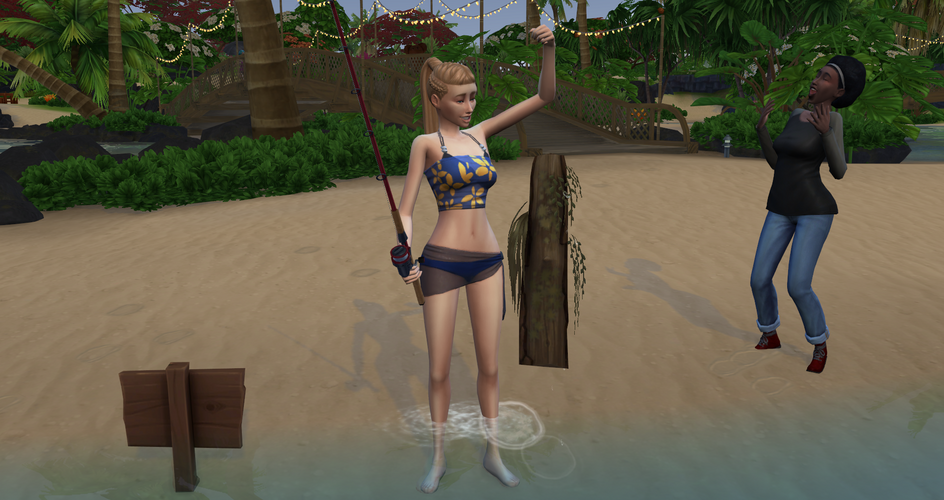 Caly: Great, I think I found a new kind of fish!

That would be a piece of driftwood. Throw it back, it’s useless to us.

Random fan: Ohmygoshohmygoshohmygosh I love you so much! If you don’t want that piece of driftwood, could I take it home as a souvenir? To own something that has been touched by the hands of Calypso Straud would be a dream come true! 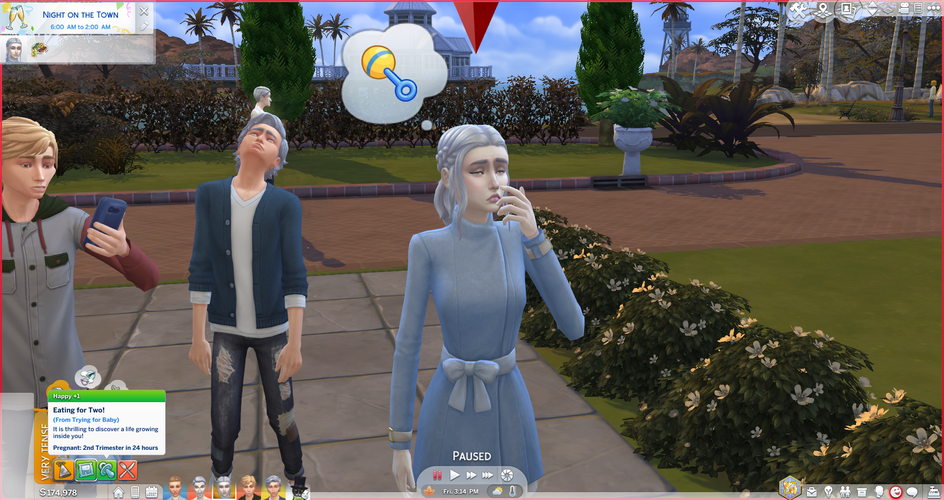 Galatea returned from school with more than just homework. Yep, that is a pregnancy moodlet. A PREGNANCY MOODLET!

Galatea: I told you I wasn’t being sick from eating spoiled food.

Galatea, I’m so mad I think I could kill you.

No, but I could wait until after you give birth and then lock you in a room to starve or something.

I was so so mad when this happened. I literally shouted at my computer.

I only have risky woohoo at 5% and Galatea and Dana only woohooed once! Plus, they weren’t even meant to woohoo, I only told them to ‘mess around’!

I have switched on pregnancy aging with MCCC so that Galatea’s age won’t be frozen while she is pregnant, I don’t want to delay her YA birthday for this.

I can tell you one thing though, I am switching off teen woohoo in MCCC. No more teen pregnancies in this save! 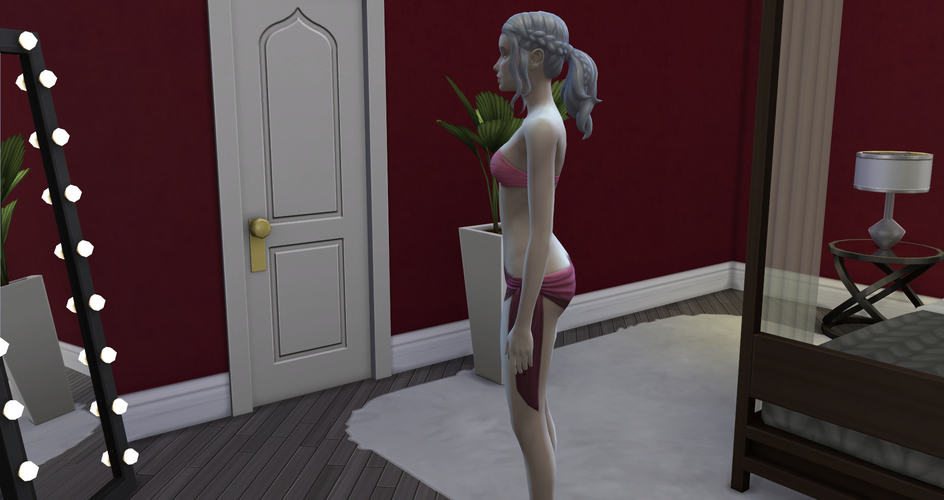 Galatea: Can you see my baby bump yet?

Seriously, this is how Galatea looks in her first trimester. You can’t tell that she is pregnant at all which is strange because all my other sims have always had a noticeable baby bump right from the moment they find out that they are pregnant. I think it must be because she is a teen. 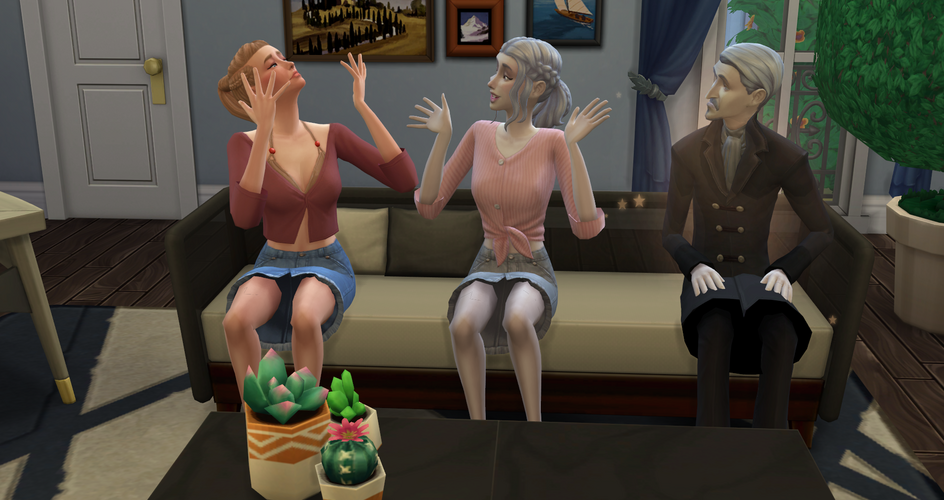 Galatea: Mum, Dad, I have something to tell you… You’re going to be grandparents!

Caly: But, I’m too attractive and youthful-looking to be a grandma! 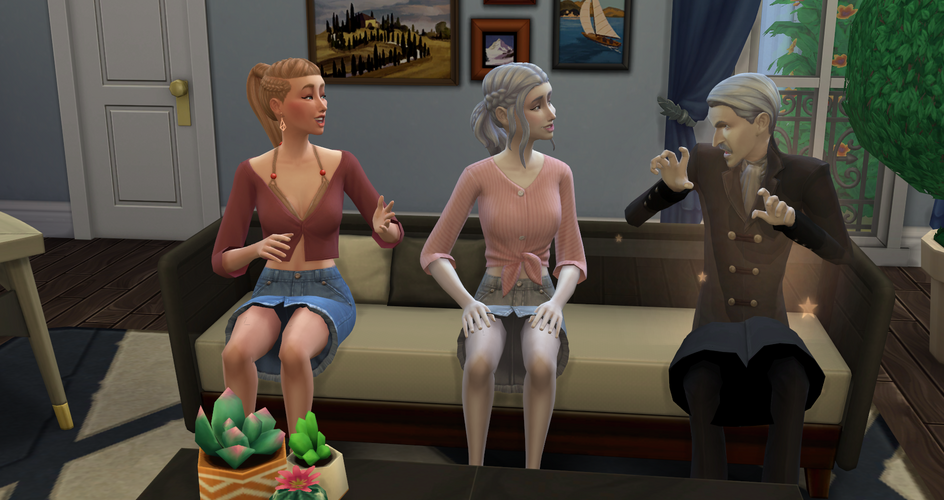 Vlad: The next time I see him, I am going to separate that Dana boy from his reproductive organs. 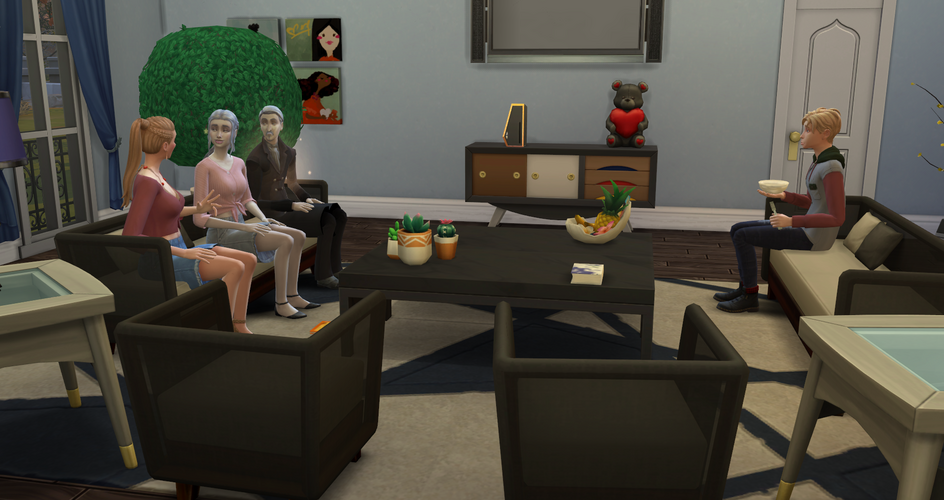 Atlas: So, I guess nobody cares about me.

Right now? No, no they do not. 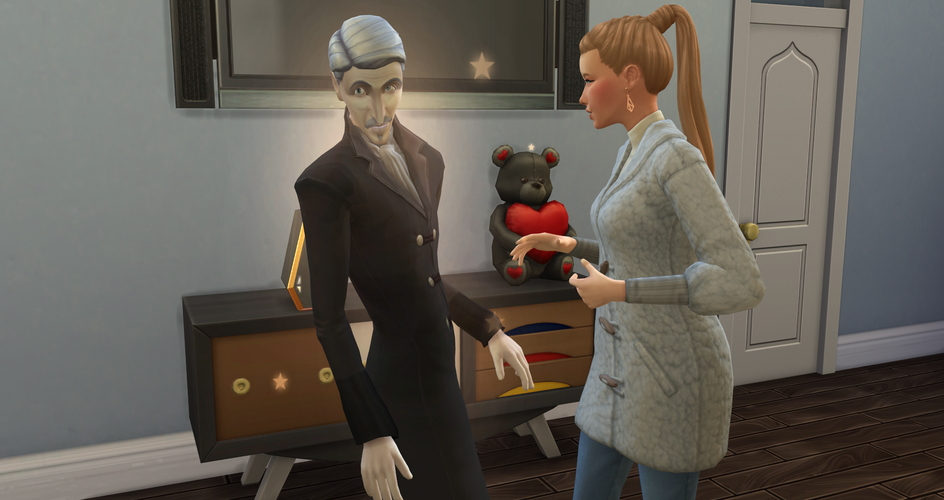 Caly: The thought of becoming a grandma is making me feel old. Buuuuut, I know what we could do which would help me to feel young and beautiful…

Vlad: If you mean what I think you mean then I’d be happy to oblige. 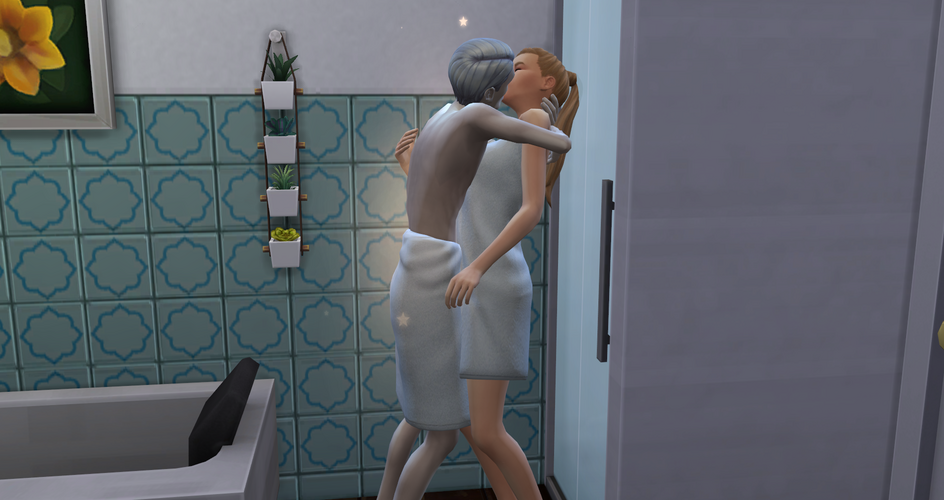 Oh no, they chose to woohoo in the very same shower that their grandchild was so recently conceived in. Don’t worry, I made them take birth control. No more surprise babies! 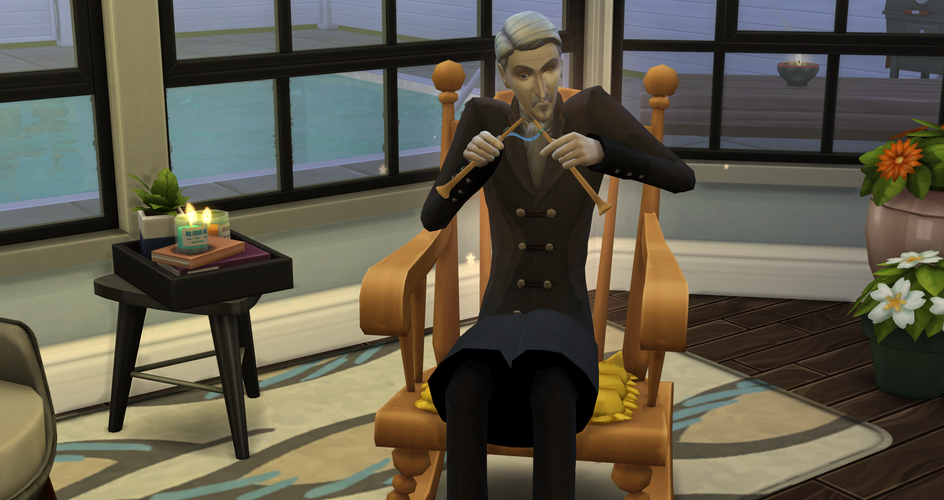 I did end up getting Nifty Knitting on release and of course I gave Vlad the ‘Lord of the Knits’ aspiration (his seventh aspiration!)

Vlad: And just what am I meant to do with this pair of chopsticks and nauseatingly bright coloured string?

Those are knitting needles and wool and you’re going to use them to knit me a beanie, quick time!

Vlad: I am an ancient and deadly vampire, I refuse to participate in such a ridiculous hobby. 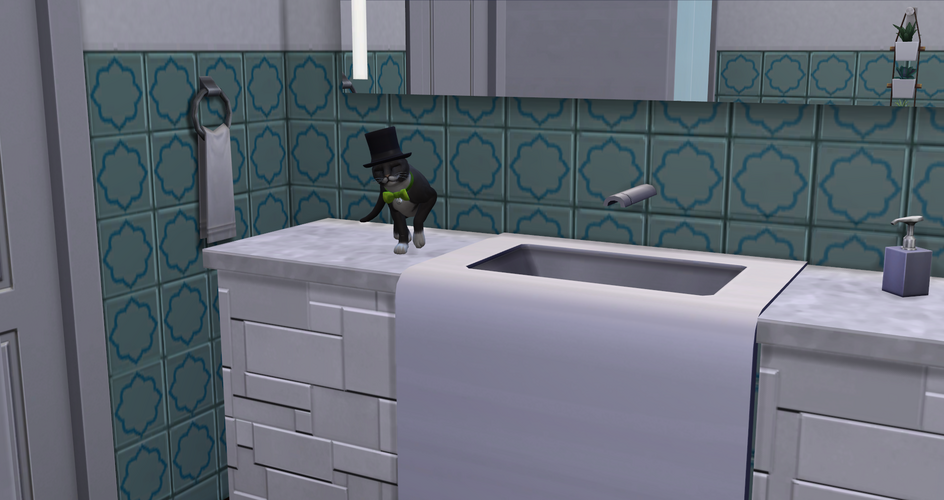 Mayor found another counter to climb on. I swear he never seems to find feathers anymore. Maybe I should just lock him outside… 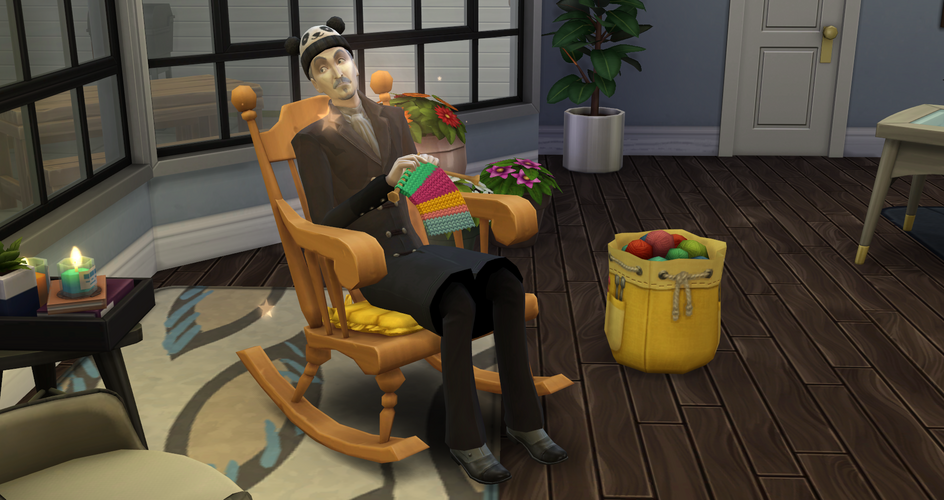 Vlad: Ok maybe this whole knitting malarkey isn’t so bad after all – I’m getting quite good at it now! Do you like my hat? It has the face of a ferocious bear on it. 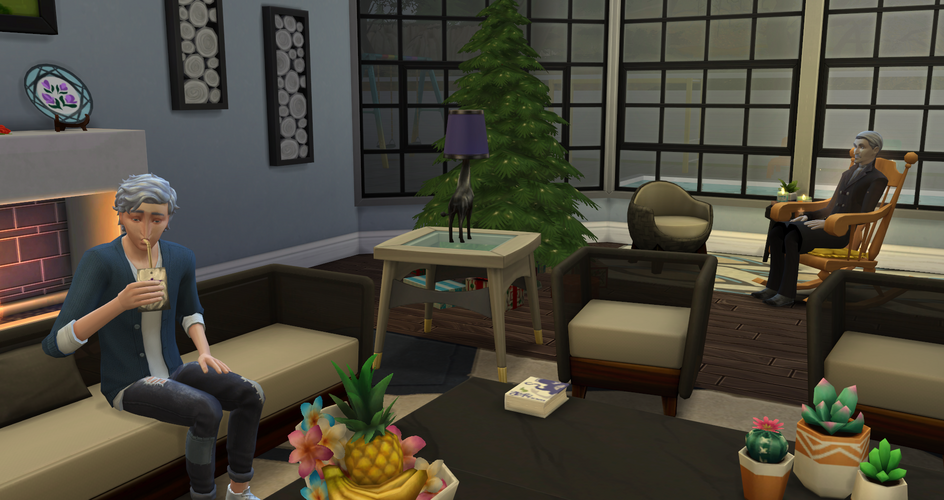 Vlad: Epi, just what do you think you’re drinking?

Vlad: Really? Because that looks like a plasma pack. And you know I won’t tolerate those things under my roof. You have a pair of fangs for a reason, my boy. Don’t let them go to waste.

Epimetheus: I’m sorry, Dad. I promise I won’t do it again! 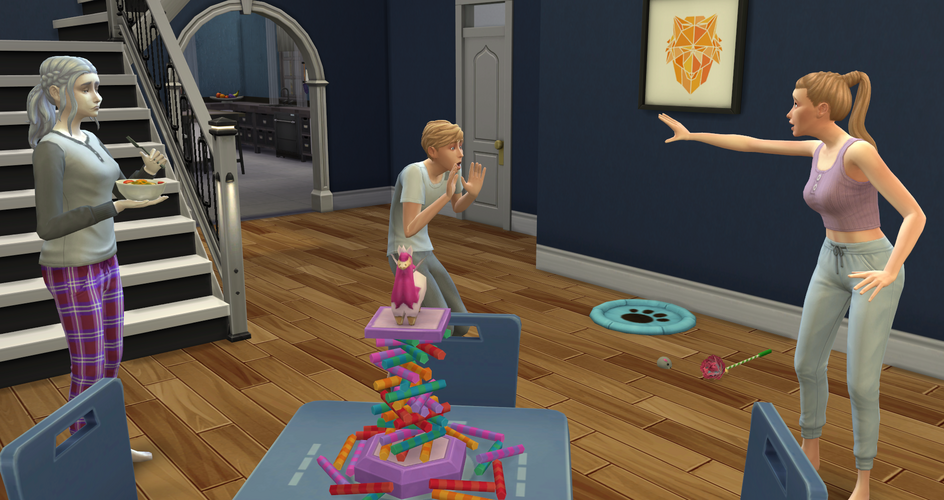 Caly: Doubt kills more dreams than failure ever will! Be who you want to be, not who they want you to be! You only fail when you stop trying! If you see it in your mind, you will hold it in your hand!

In case you’re wondering what’s going on in this screenshot, I made Caly give an inspirational rally (which sims can do if they have one of the celebrity perks). Watching sims will gain skills faster for a few hours and I thought it’d help Atlas with his aspiration. 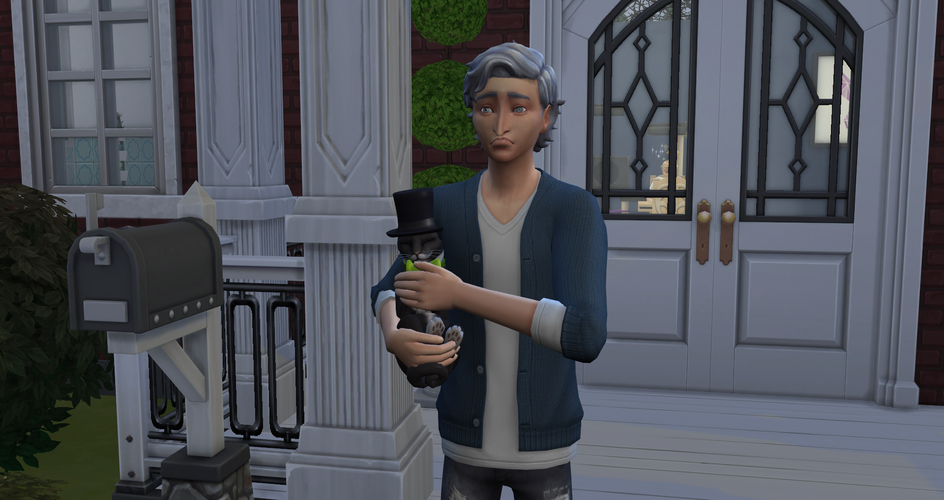 Epimetheus: Evil voice, Mayor and I would like to register a complaint.

Mayor, you find me the last feather from the feather collection and we’ve got a deal. As for you Epi, I will stop ignoring you (or ignore you less) if you help Atlas to complete his aspiration. 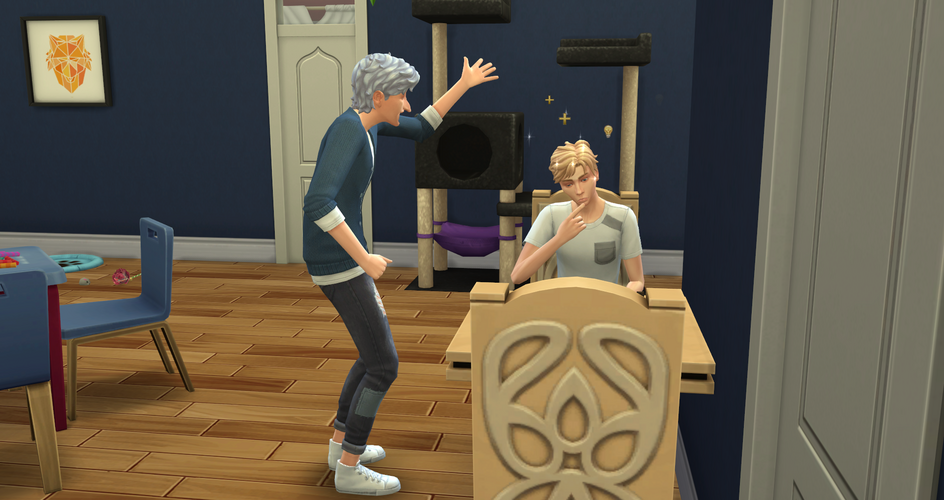 Atlas: Really? Thanks bro, you rock!

Atlas needs to master logic for his aspiration. I’m using lots of skill boosts to help get it done faster: being mentored by Epi (who can do this because he has already maxed logic), drinking the skill boost potions that Caly and Vlad get in the mail because of a celebrity perk, listening to inspirational rallies by Caly, the ‘science lair’ lot trait which makes learning logic faster and he also has the ‘mentally gifted’ reward trait from completing the childhood whiz kid aspiration. 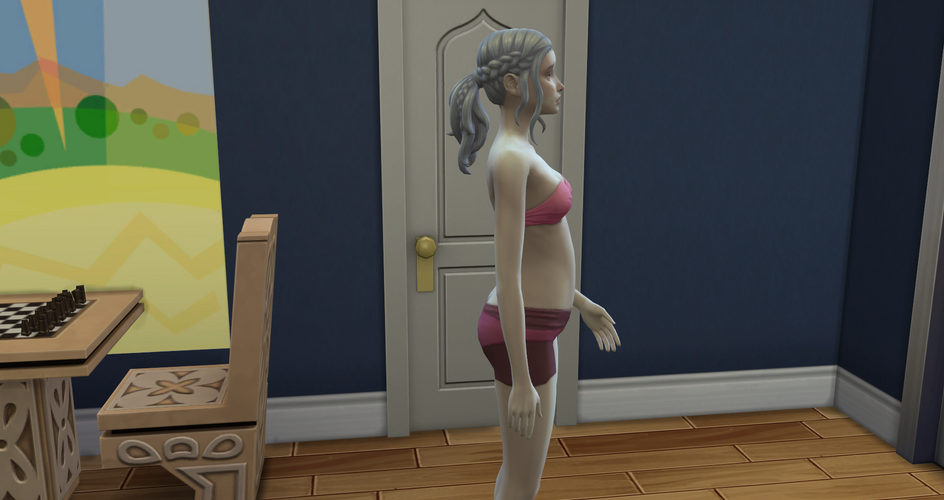 Galatea entered her second trimester and got a visible bump at last but it’s still tiny. 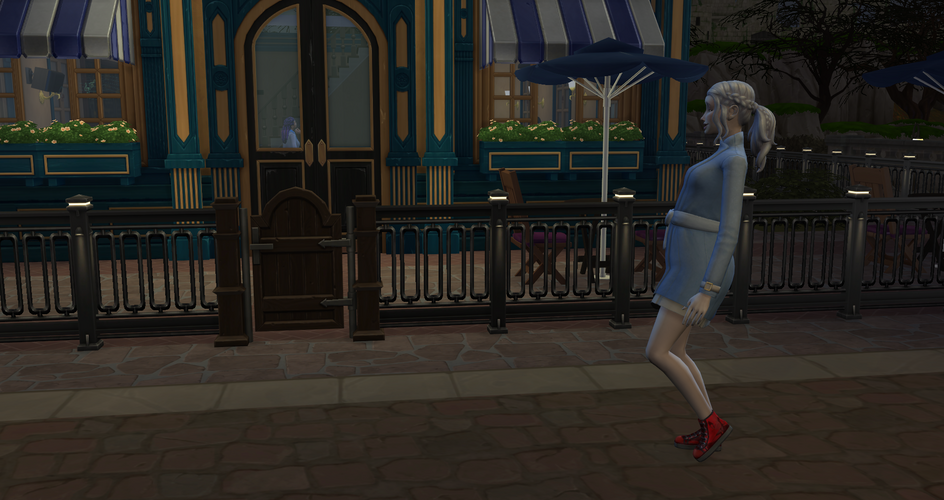 What are you doing at a pub, Galatea? You’re not meant to drink while you’re pregnant.

Galatea: I have to tell Dana about the baby and Mrs Bheeda said I could find him here. 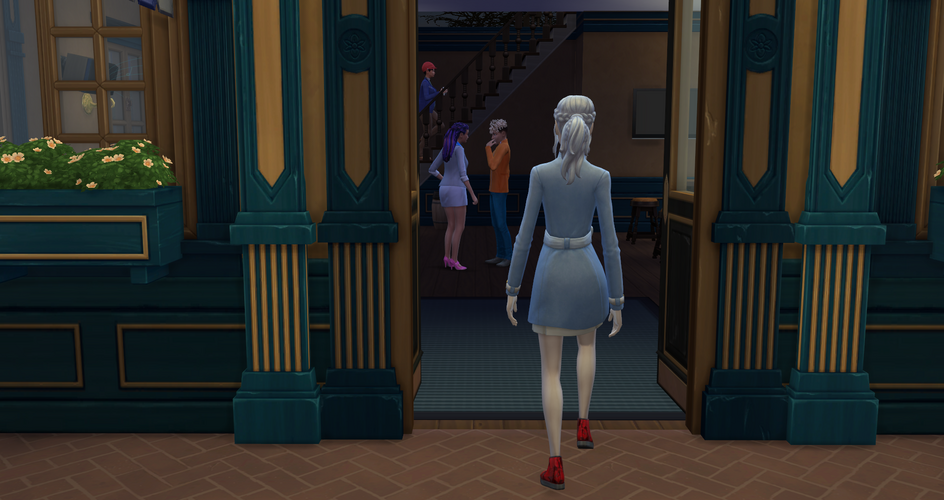 Galatea: Look, there he is with a friend. 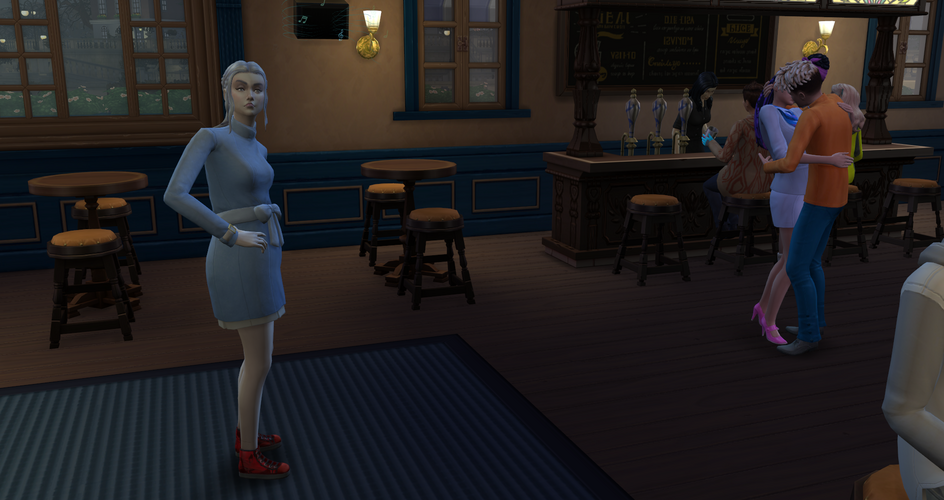 Full disclosure: I maaaaayyy have orchestrated this little scene to give Galatea a good excuse for breaking up with Dana. But she doesn’t have to know that 😉 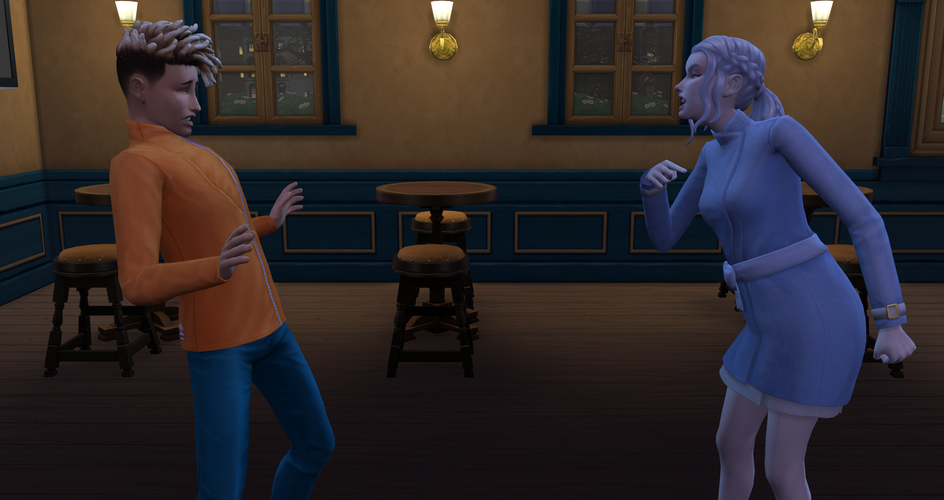 Dana: Galatea, I didn’t expect to see – I mean, when did you get here?

Galatea: Don’t act all innocent, I saw you with that girl! Does our relationship mean nothing to you?

Dana: Come on babe, there’s no need to overreact. We’re not exactly in a serious relationship – we’ve only been on two dates, and we never promised to be exclusive or anything.

Galatea: Not serious? I came here to tell you that I’m pregnant! Is that serious enough for you? 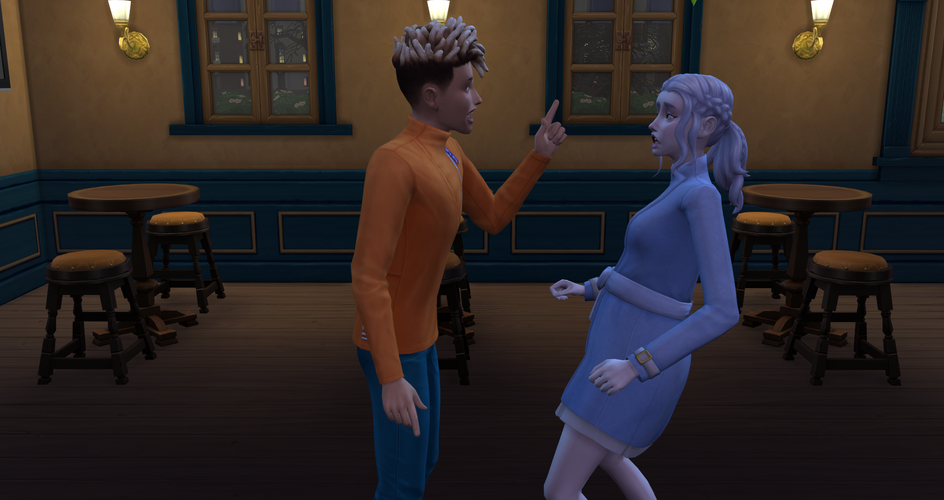 Galatea: I do this to you? You know what? I think we’re over. I can’t be with someone who treats me like this.

Dana: Good, because I can’t be with someone who acts so jealous and controlling. And I won’t let you land me with the responsibility of a kid, either. Do what you want about the baby, but leave me out of it.

Then, Dana stormed out of the bar… 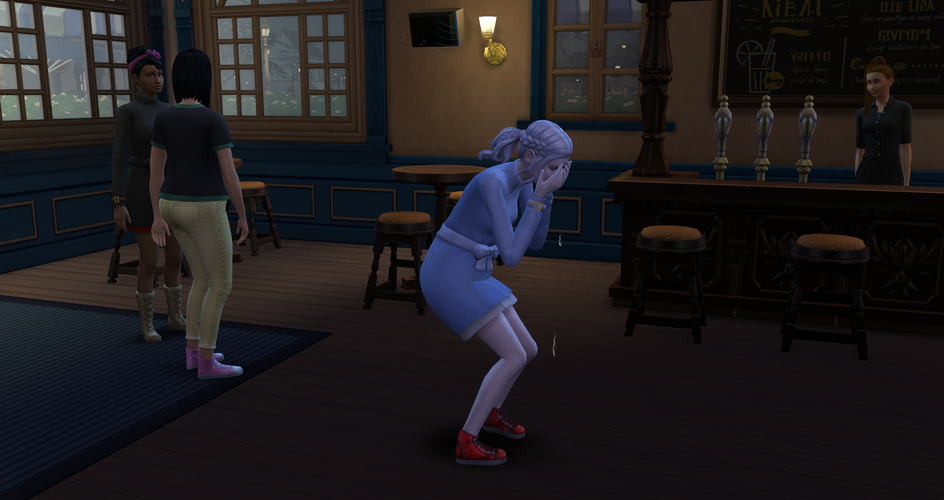 Galatea: This is the worst day of my life.

Bartender: Hard breakup, huh? You look like you could do with a drink. What about a juice on the rocks? It’s on the house.

Galatea: I can’t because I’m p-p-p-pregnant! 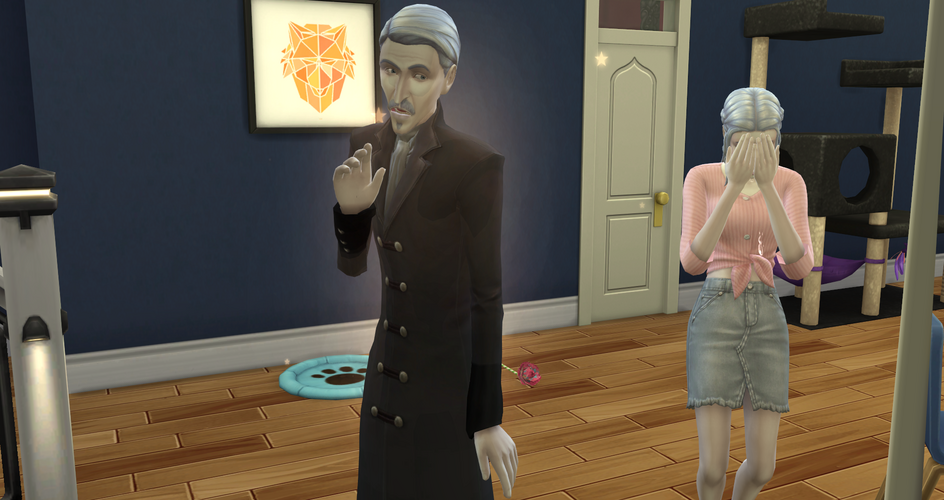 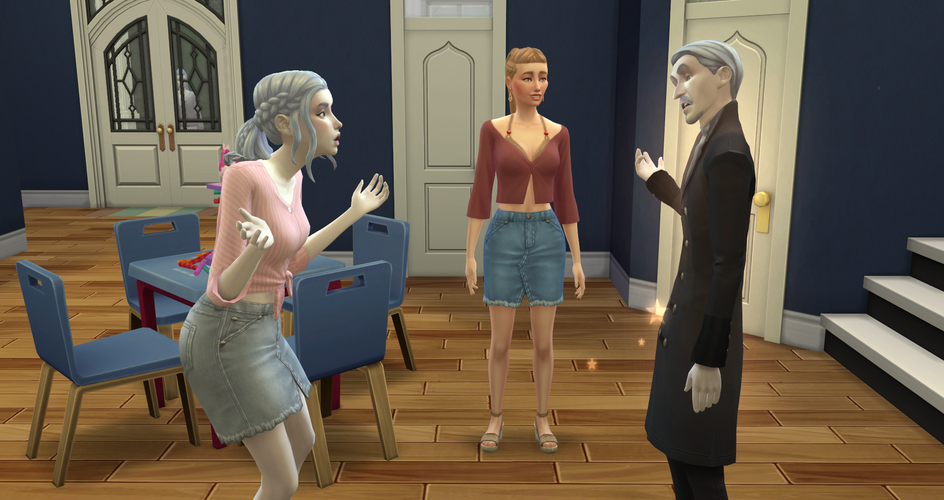 Galatea: So, long story short: I broke up with Dana because it turns out that he’s a massive jerk. He’s been cheating on me and wants nothing to do with the baby.

Vlad: That low-life good-for-nothing cur! Would you like me to kill him?

Galatea: No! No, I don’t want him dead. But, I do want him punished, I want him to hurt.

Vlad: You leave it to Dad. And let me know if you change your mind about the killing. 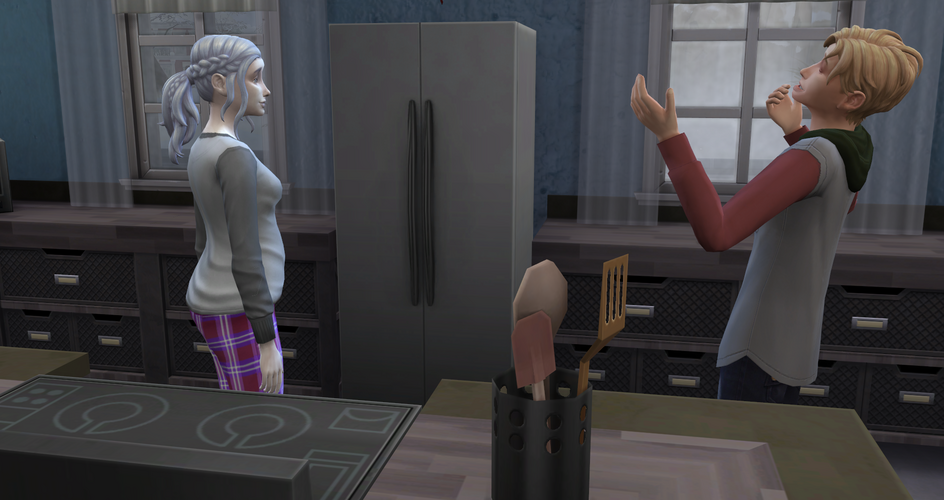 Atlas: Don’t worry sis, you’re better off without him. A real bro wouldn’t have done that to you. You’ll find a real bro some day.

Galatea: Thank you, Atlas. That’s really sweet of you. 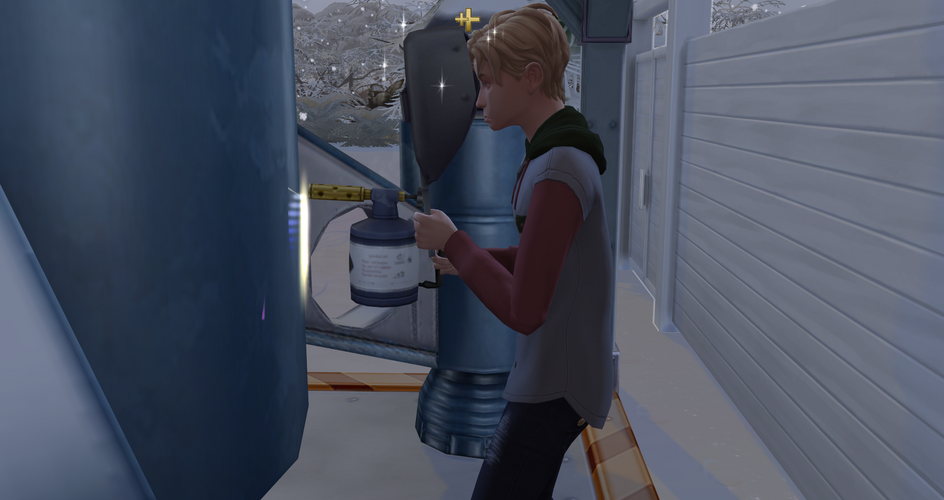 Atlas needed to launch or upgrade a rocket five times for his aspiration, so here he is working on building a rocket ship. Vlad ended up building most of it to save Atlas time, though.

Remind me: why am I trusting you with a blow torch again?