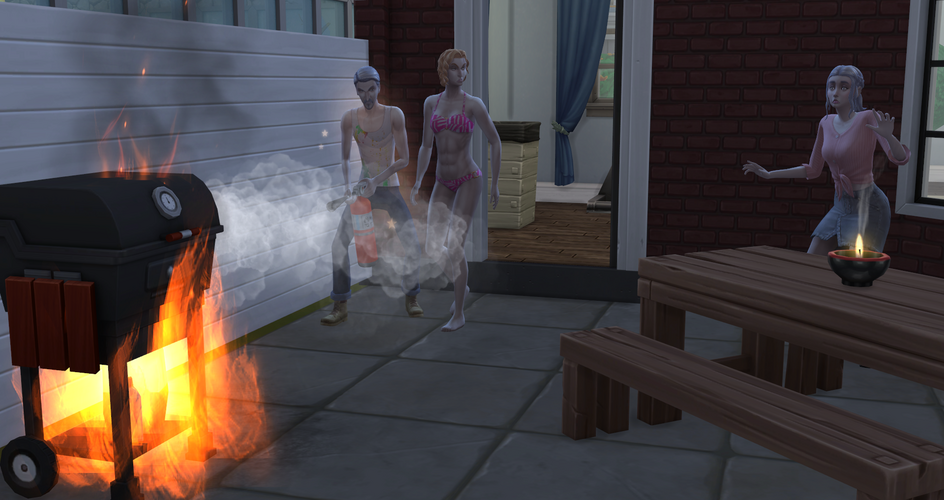 Vlad: Outta the way! Don’t worry girls, your father has this under control.

Damn you for barging in Vlad, I wanted to see the fire fighters.

Circe: How’s she going to cope with being the second gen heiress if she can’t even cope with a small house fire. Hmmm I suppose if that fire had killed Galatea I’d have been the new heiress wouldn’t I?

I suppose you would have been, since you came second in the poll. But don’t go getting any murderous intentions, Circe. 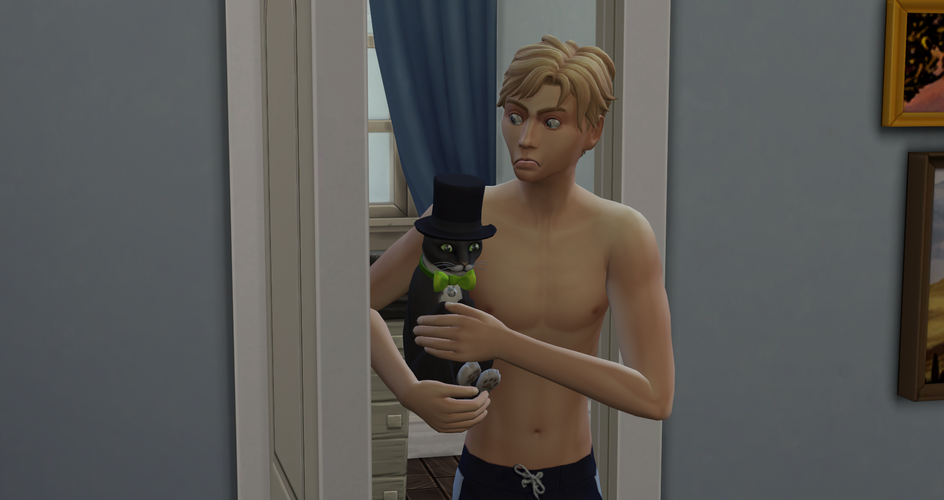 Uh… The fire is out already? 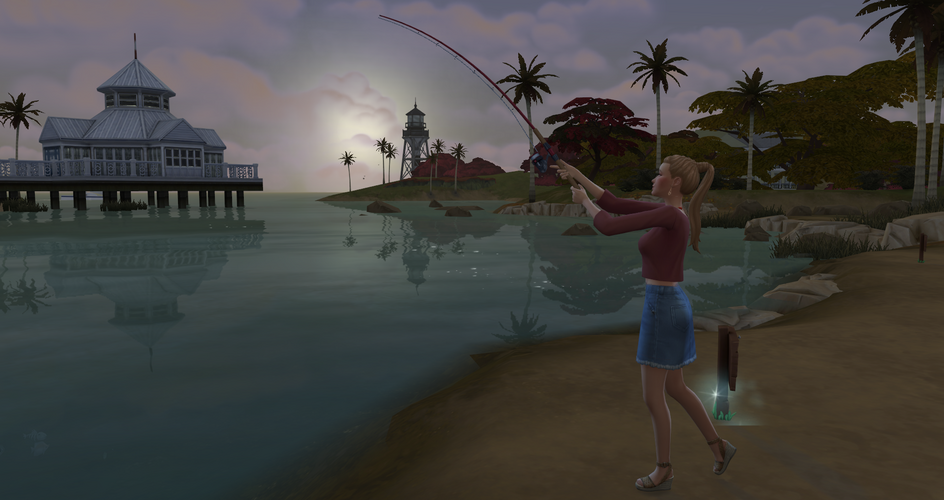 This view is so pretty, isn’t it?

Caly: Any view of me is pretty.

Not you, I meant the scenery. 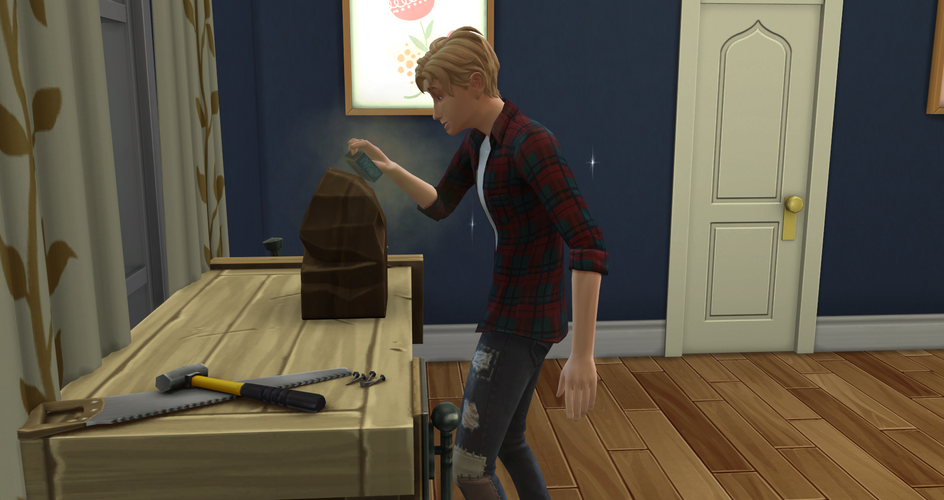 Atlas had to make something on the woodworking bench for his aspiration.

What a lovely… Um what’s that meant to be, Atlas?

Atlas: It’s meant to be lit!

Yeah not really what I was getting at but ok. 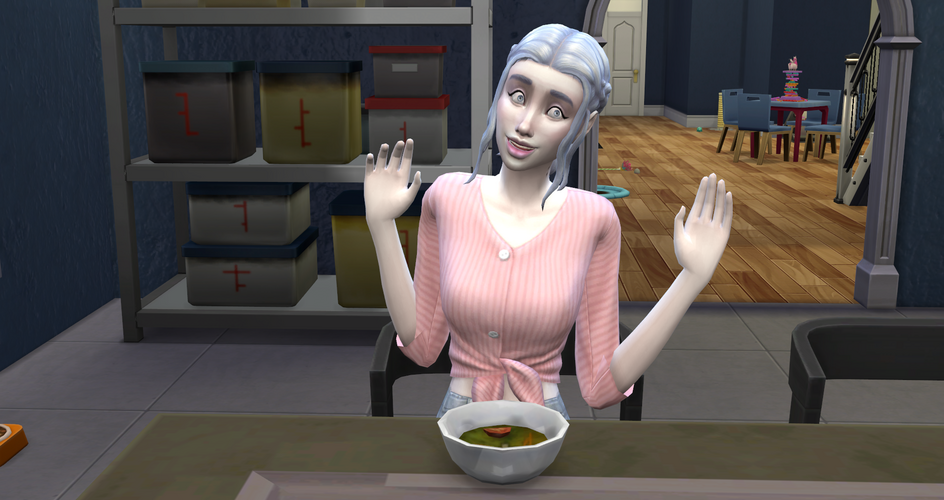 I barely ever manage to get a screenshot of my sims doing the mermaid animation thing and I thought this picture was too cute not to include. 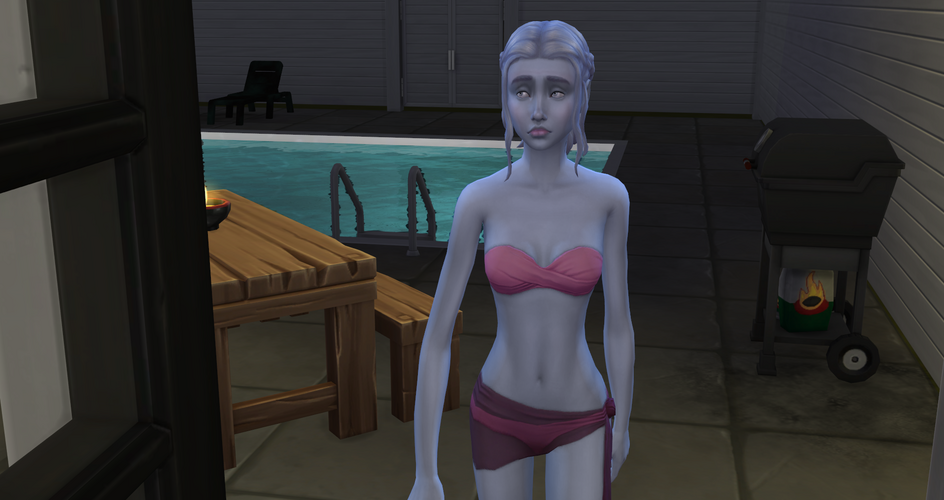 Galatea: It’s not my fault! Circe told me that she’d seen my favourite bracelet at the bottom of the pool so I ran out and dived into the pool to retrieve it but it wasn’t there and when I tried to get back in the door wouldn’t open and it got so very very cold.

Circe, I thought I told you not to kill your sister?

By the way, I changed the seasons to 7 days rather than 14 which is why it’s cold in the game right now (I forget when I did this exactly but it feels like it was a while back). 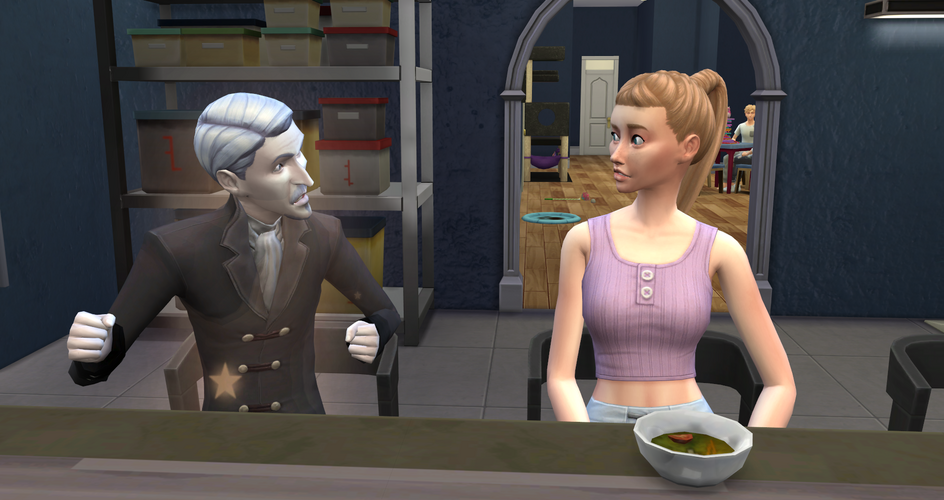 Vlad: … By this time, the fire had become a raging inferno which completely engulfed the patio, cornering Galatea against the house. Without a thought for my own safety, I ran headlong into the flames, fire extinguisher in hand.

Caly: Thank the watcher you acted so quickly! To think I could have lost you both… It’s a wonder neither of you were hurt!

Nah it was nowhere near that bad, Caly. Vlad is just showing off. 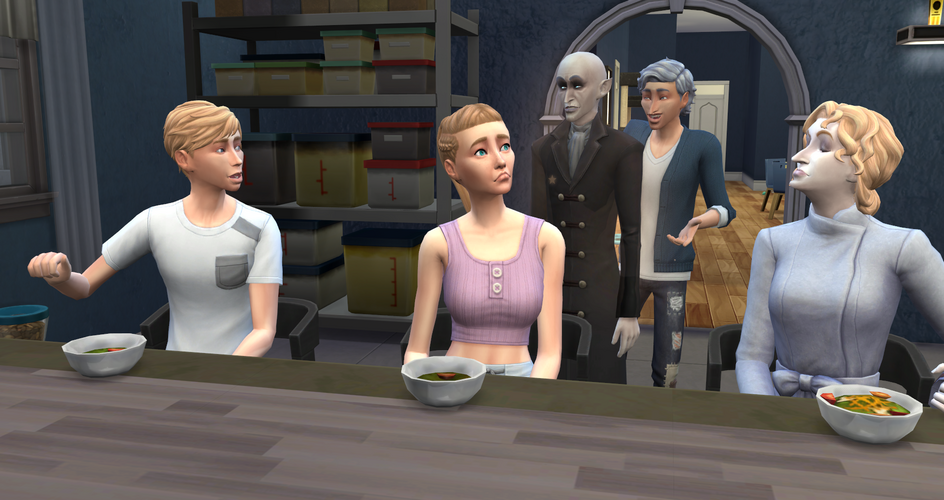 Atlas: Yo Dad why are you in your creepy form?

Epimetheus: *Snigger* You mean his creepier-than-usual-form.

Vlad: Creepy? My dark form is not merely creepy, it is nightmarishly terrifying! And to answer your question: I’ve just been hunting.

Caly: Scylla used to go hunting, too. I miss Scylla.

Caly: No, not another one of my babies! How will you cope without your Mum?

Vlad: Circe, stop being smart with your mother! Don’t worry, dear. Scylla and Circe will be just fine, they’re your daughters after all. 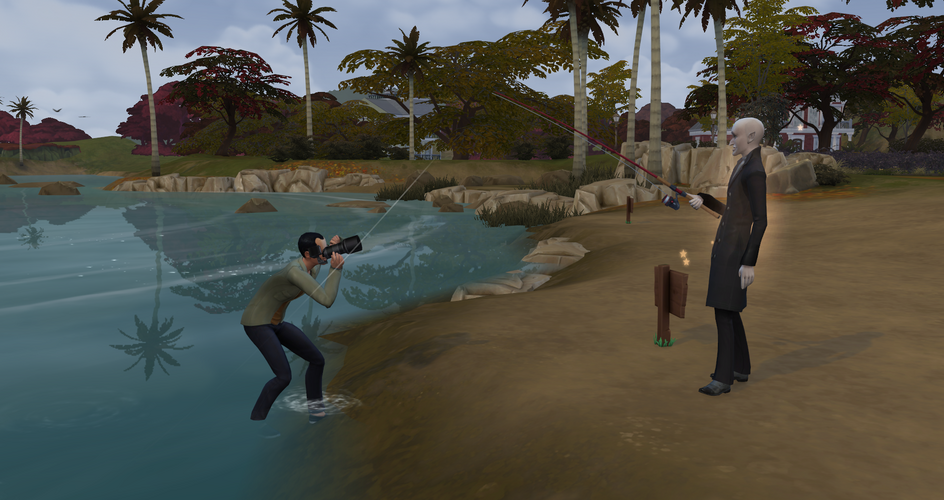 Paparazzi: Over here, Vlad! Over here! Give me a smile!

Vlad: Can I push this guy into the lake? He’s really getting on my nerves. 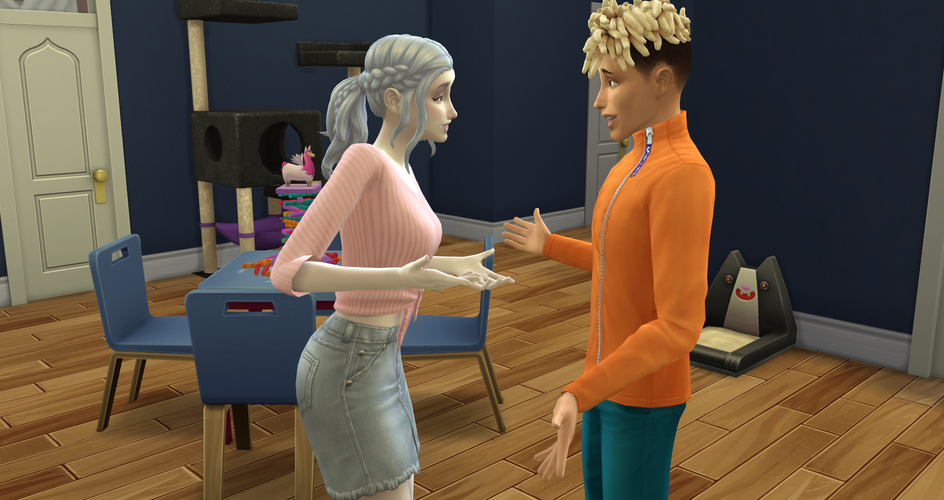 Galatea still needed to go on one more date for her aspiration so I had her invite over Dana for another stay at home date. I’m so mean for not letting them go out anywhere fancy.

Galatea: So, I guess we’d better make the most of this date. Time’s running out.

Dana: What do you mean? We’re both still young, we’ve got all the time in the world.

Galatea: Yeah, sure we have… Anyway, there’s something I want to do before it’s too late.

By the way, turns out Dana is a YA now. He must have aged up since Galatea last saw him. That’s not too weird, right? I mean, Galatea could be 18 and Dana could be 20. 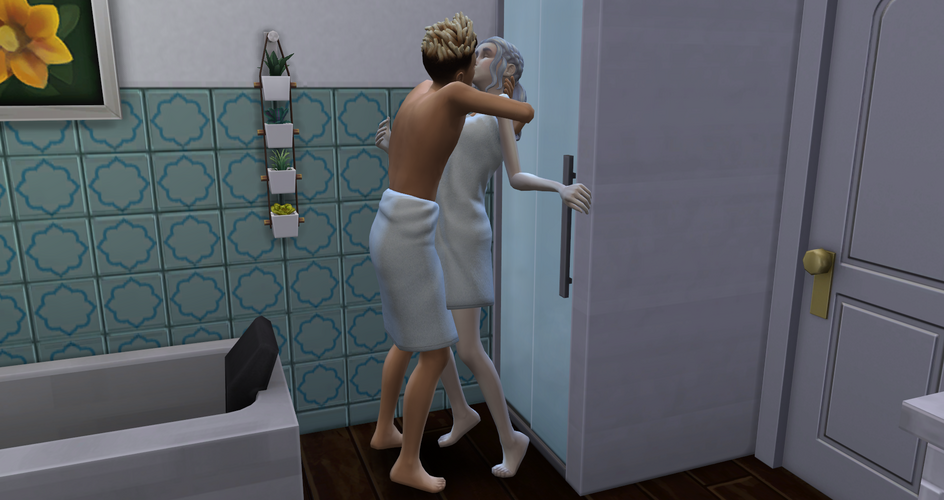 Dana: You were right, we should definitely DEFINITELY make the most of this date. 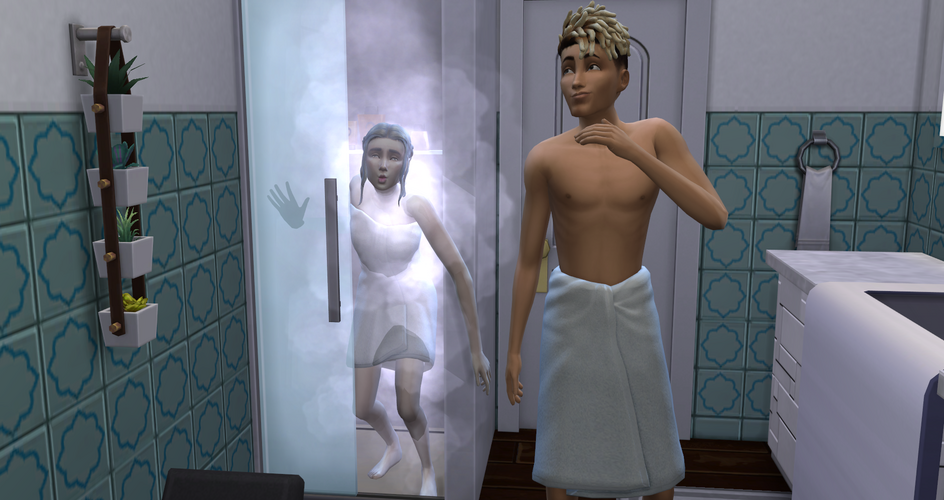 Nice shower, guys? Because I’m sure that’s all you were doing in there…

I told them to mess around in the shower and they went and full on woohooed (I got a notification saying that they were woohooing for the first time). I guess that may have happened because Dana is a YA, or perhaps because I have teen woohoo allowed in MCCC which I’d forgotten all about. 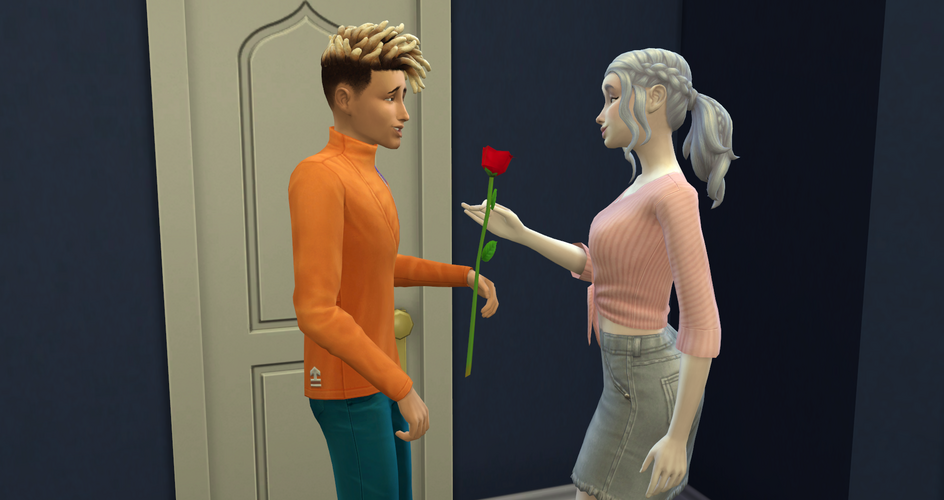 Galatea: Dana, you’re super cute and I had a lot of fun showering with you. Do you accept this rose?

Dana: That sounded like a speech from The Bachelorette.

Dana: Practicing? For what?

You’re going to have to break up with him some time, you know. That rose didn’t count because the bachelorette hasn’t begun yet.

Galatea: I know, I know. But, it would be mean to break up with him straight after we woohooed.

Dana: Uh who are you talking to? 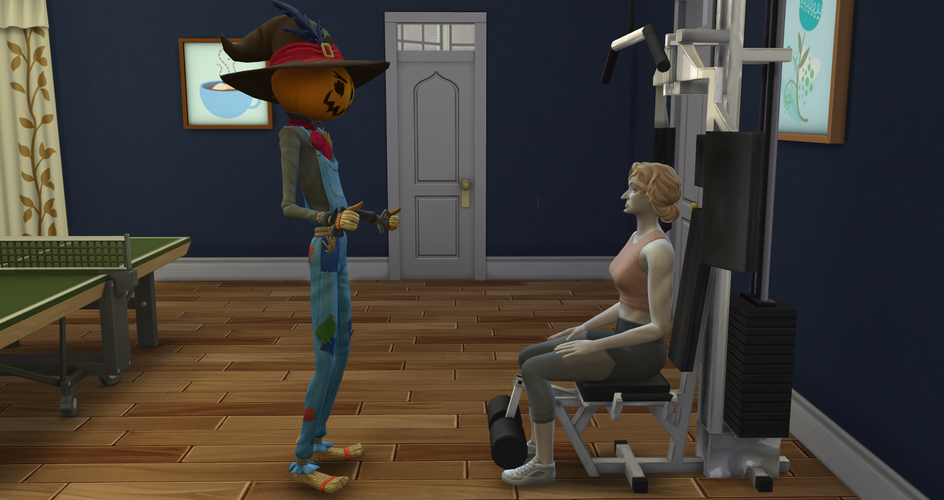 Patchy: Hello young lady. You look like you’re in need of a personal trainer. Allow me to offer my service.

Circe: Aren’t you meant to be the gardener?

Circe: Sorry but you’ll have to find some other job. I don’t need a scarecrow to tell me how to work out. 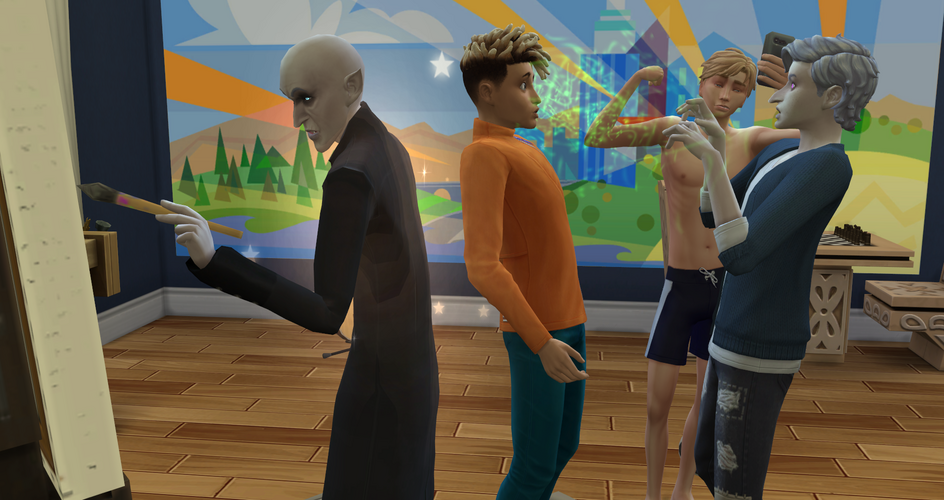 Epimetheus: Hey, it’s you again. You’re right on time, I was just thinking I could do with a drink. Mum said I can’t drink from family members but I guess you’re not off limits since you’re only Galatea’s boyfriend.

Vlad: Does anyone else hear a fly buzzing?

Vlad, I know that you don’t like Dana but that was a little harsh and more than a little immature.

Atlas: Sorry bro, no time to help. I gotta post this picture of my biceps to Simstagram.

Your nonexistent biceps, you mean? 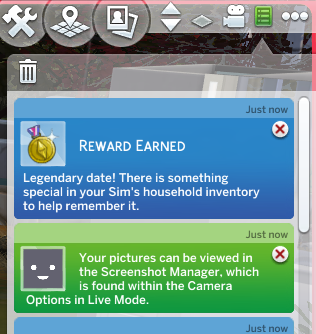 Apparently the woohoo made up for being drunk from by a hungry vampire because Galatea got a gold medal for her date with Dana.

Now that she has been on two dates with Dana, Galatea has completed the first stage of the soulmate aspiration. She can’t do any more of this aspiration until she becomes a YA so Dana has kind of served his purpose which means she will have to break it off with him soon. 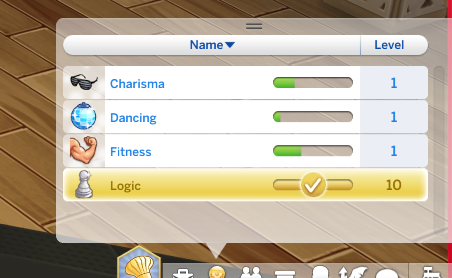 Random observation: Epimetheus maxed the logic skill and I didn’t even notice. This just shows how much I have been exploiting him with the microscope and space prints. 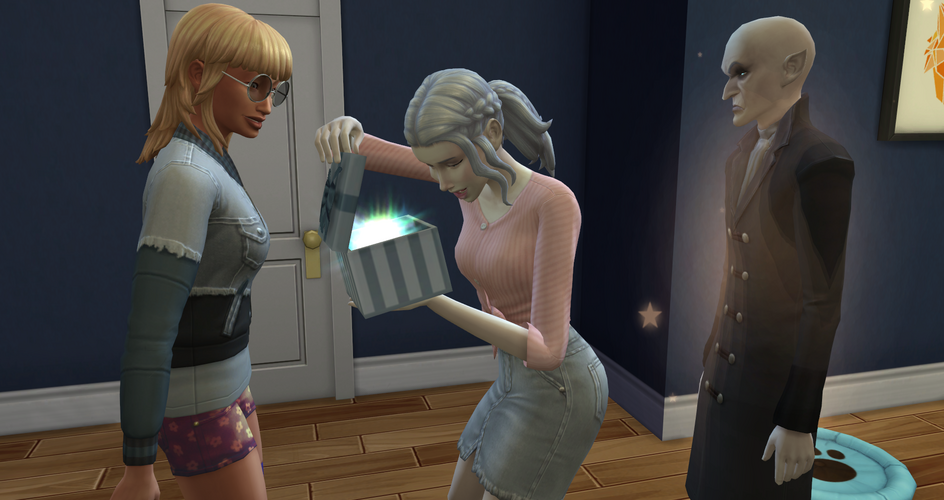 Wiki, one of the sims that Vlad turned into a vampire visited and for some reason gave Galatea a ‘neighbourly gift’.

Galatea: Wow thank you lady who I have never met before in my life. It’s a… Hydroponic planter. Great, I just love gardening – dirt, bugs and all that gross stuff *shudder*.

Vlad: Hey, you’re meant to be my minion! Where’s my gift? 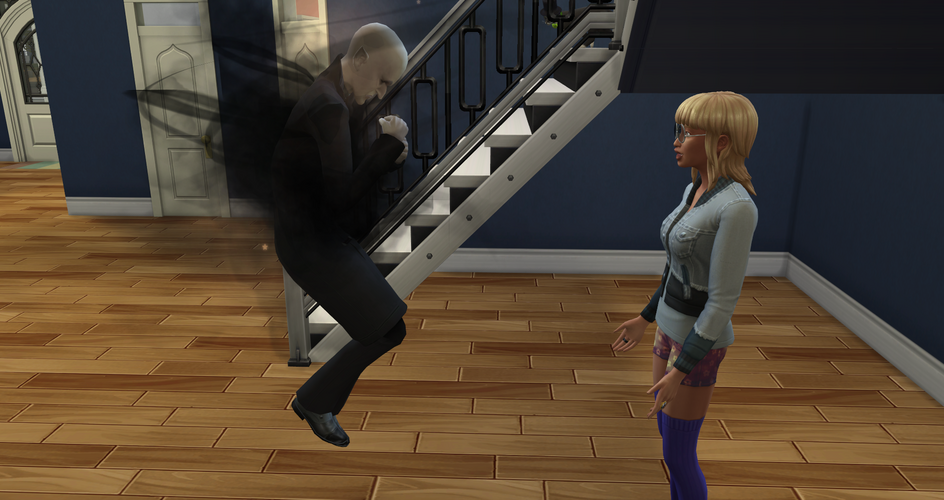 Vlad had to give vampiric training to three of his vampire offspring for his aspiration. I forgot to take screenshots of him instructing the other two but here he is teaching Wiki how to use her vampire powers.

Wiki: Great, so now I know how to make black smoke. Big deal. When do we move on to the cool stuff? 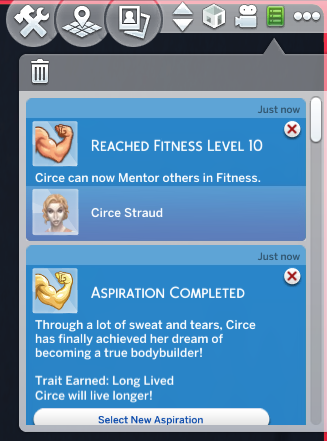 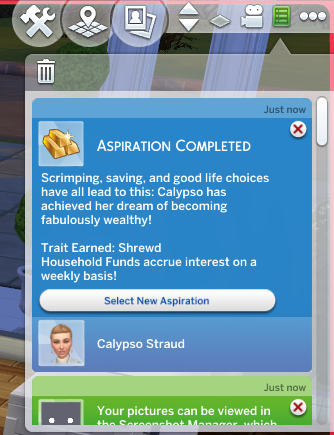 At 10:30PM on the evening before her birthday, Circe maxed the fitness skill and therefore completed her aspiration… Which meant that I got to kick her out straight after she aged up the next day – yay, now we only have 5 sims in the household (plus Mayor).

Also, Caly completed the fabulously wealthy aspiration, largely thanks to selling Vlad’s paintings for him. I gave her the ‘angling ace’ aspiration next. 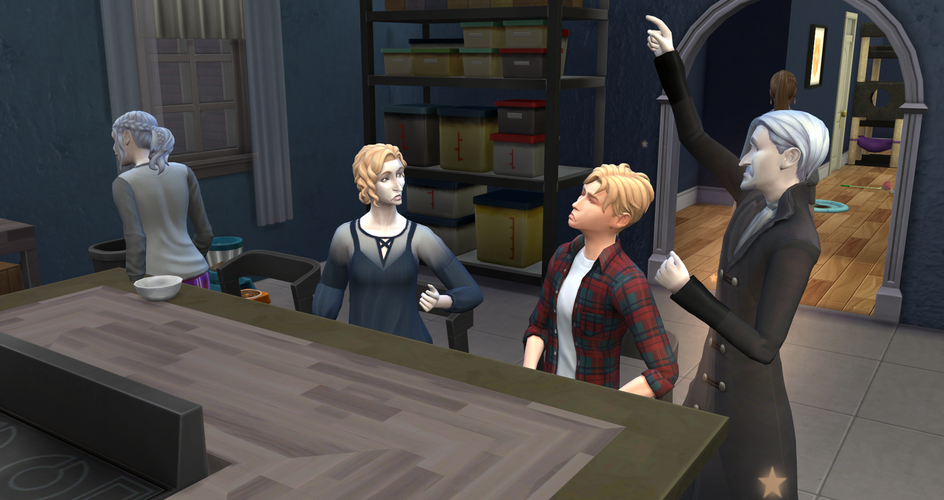 Circe: I can’t believe I’m going to be an adult. I don’t feel ready! I don’t even know what I want to do with my life.

Vlad: You can achieve anything you want, Circe. You reach for the stars!

Atlas: You mean she should like become an astronaut? Dope! 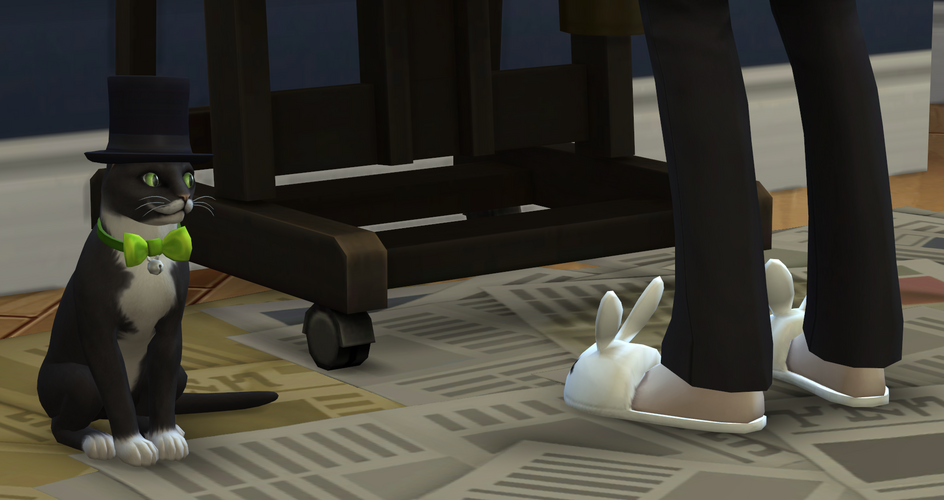 I really wouldn’t try it if I were you… 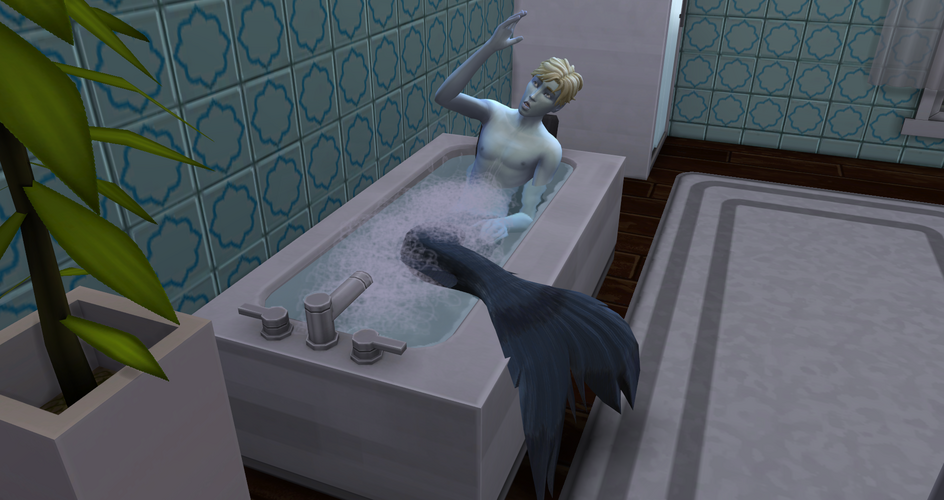 Here’s a screenshot of Atlas in his mer form, just because I like it so much.

Atlas: Yeah, having a tail is pretty wicked. I can, like, wave it around and stuff. 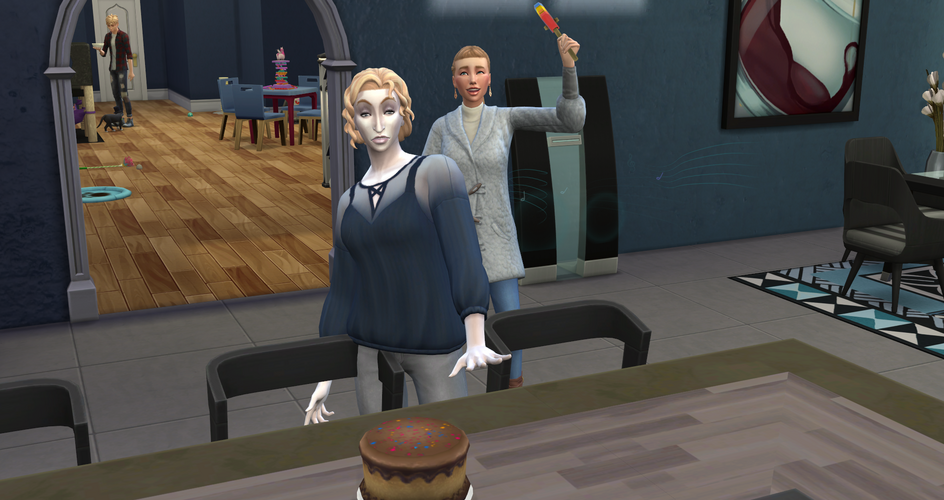 Circe became a YA! She rolled the geek trait.

Circe: Aren’t you meant to be sad that I’m moving out?

And here are some CAS shots of YA Circe: 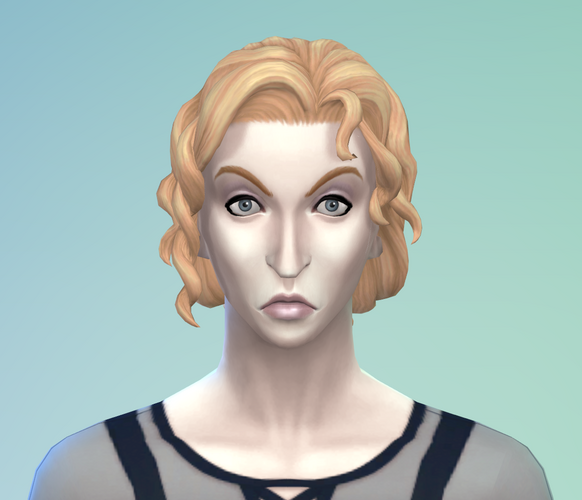 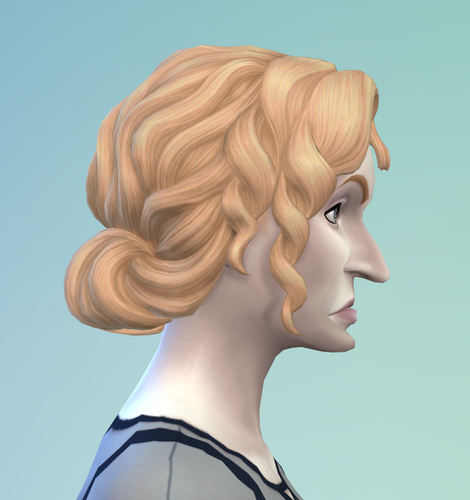 Still a Vlad clone in her normal form. 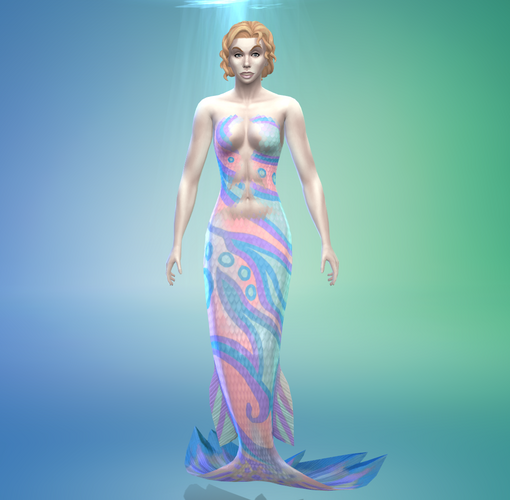 I don’t know about you, but I am loving her ripped mermaid form! 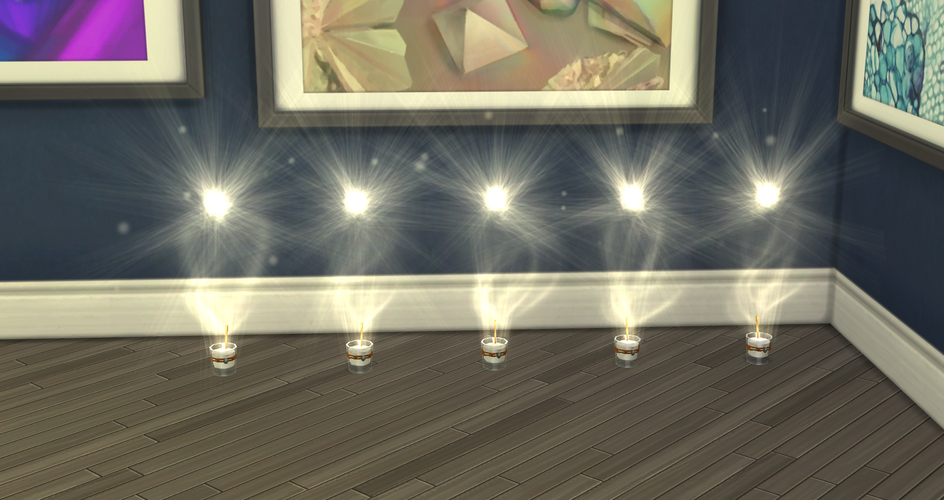 As part of the scoring, you get points for collecting potions of youth. Before Scylla moved out she was able to purchase one potion of youth from the reward store and Circe purchased four so we currently have a grand total of five. They look so pretty. 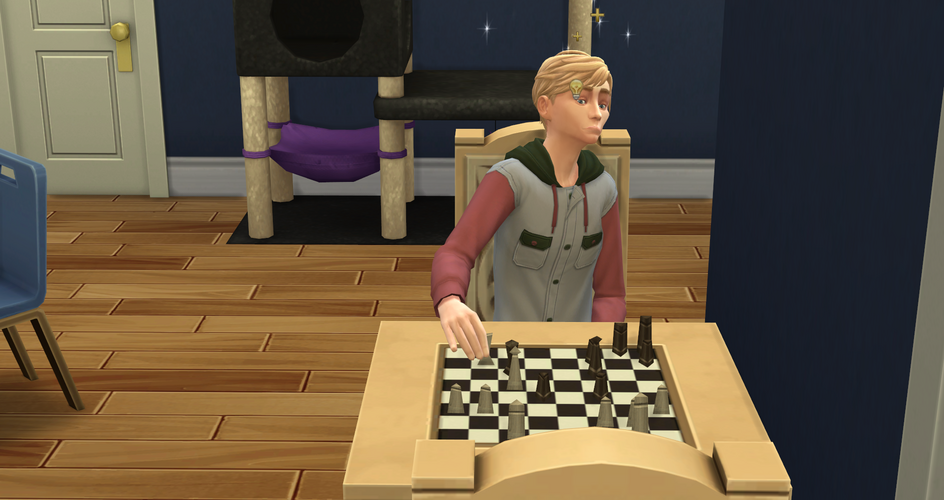 And on a random note to end the chapter, I have been making Atlas play a lot of chess in order to build his logic skill (flashback to his childhood days, right?)

What are you looking so smug about, Atlas?

Atlas: Dude, I rock at this game. I, like, never lose!

Maybe because you always play against yourself?