Last time, the rest of the family embarrassed Galatea in front of her new boyfriend (Dana Bheeda), Atlas and Epimetheus joined Scylla on microscope print finding duty, Caly became an adult and Galatea won the heir poll, making her the gen 2 heiress. 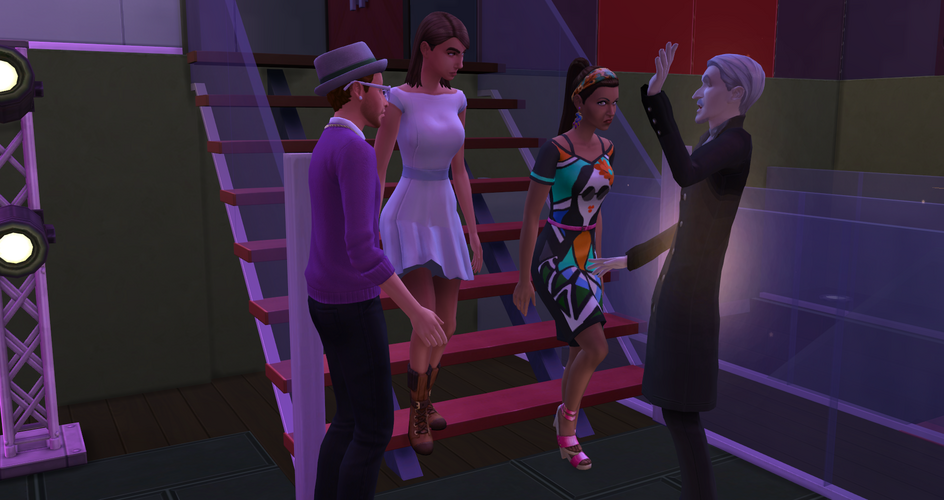 White dress girl: Who is that creep? 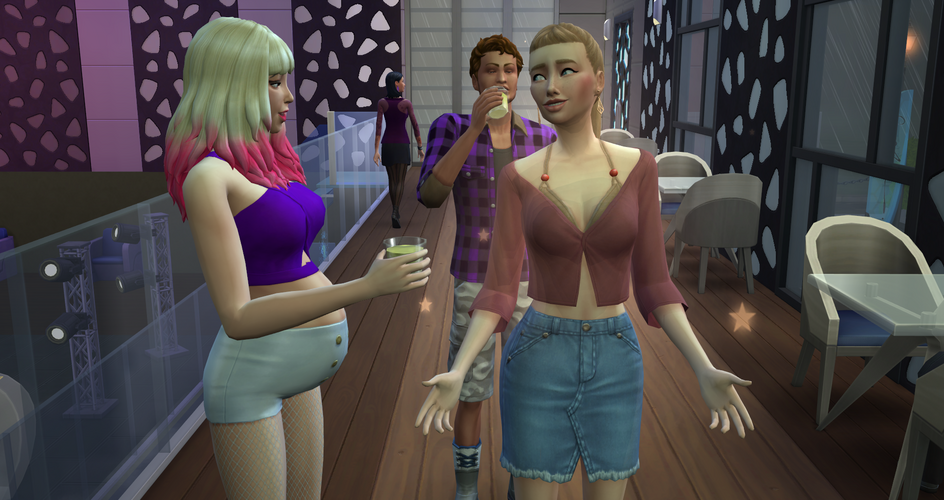 Caly: Expecting, are you?

Caly: Here’s some free advice: whatever you do, don’t have five kids. Just… Don’t do it. 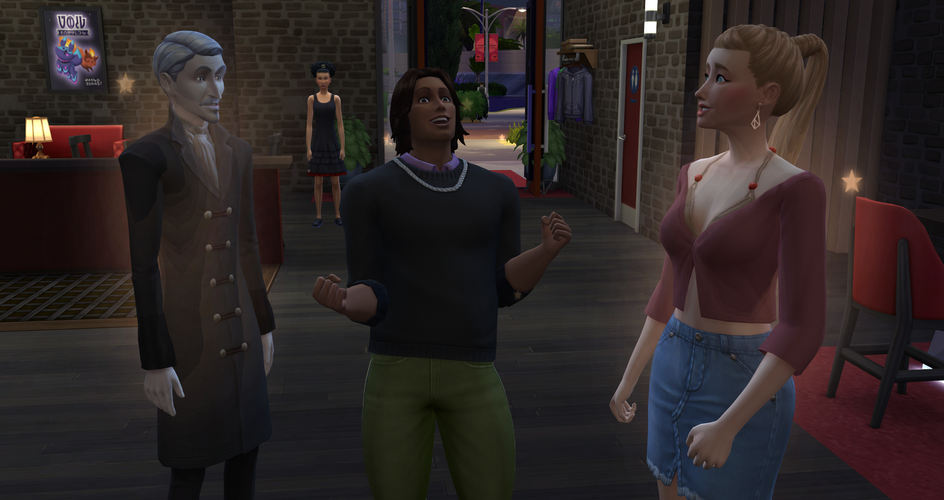 Orange: No way, Vladislaus and Caly Straud?! You guys are the best!

Ok but aren’t both of Orange’s parents also mega famous?

Caly: Maybe but are Octavia or Thorne part God? I think not! 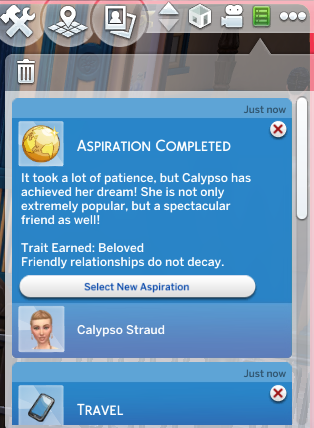 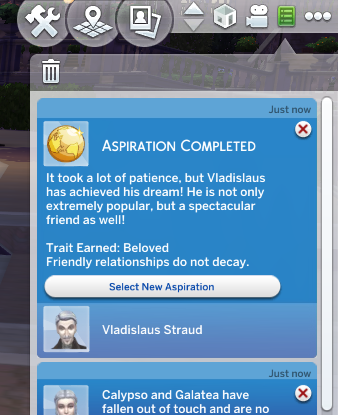 Caly and Vlad both completed the friend of the world aspiration! For the ‘have a BFF’ step of the aspiration, Vlad became BFFs with Caly, so Caly and Galatea are no longer BFFs. 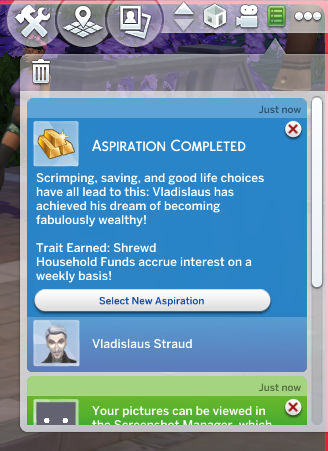 After that, I changed Vlad’s aspiration to the ‘fabulously wealthy’ one and he completed it instantly. I mean literally instantly. I changed the aspiration and the next thing I knew the game had told me he had completed it. That was fast! I guess selling all those paintings really paid off (pun very much intended).

I decided to have Vlad do the ‘vampire family’ aspiration next since he will be able to do that one really quickly.

As for Caly, I have given her the ‘fabulously wealthy’ one. All she has to do now is have earned 200,000 simoleons and at the time of selecting the aspiration she had earned 89,000. She will complete that quickly since it turns out that if she sells paintings that Vlad has painted the money registers as her own personal earnings. 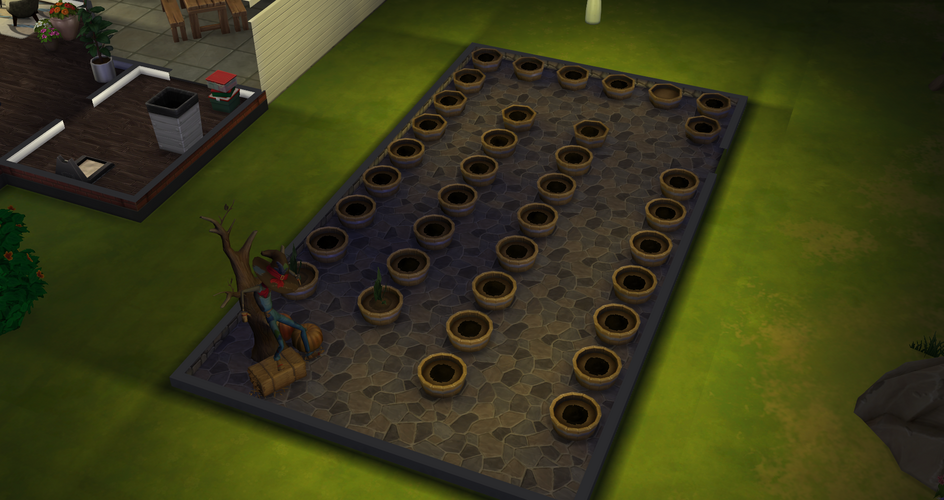 I hate the gardening bugs. The dragonfruit plants were just starting to sprout again and then they all became dirt clumps once more 😦 so much for my goldmine. 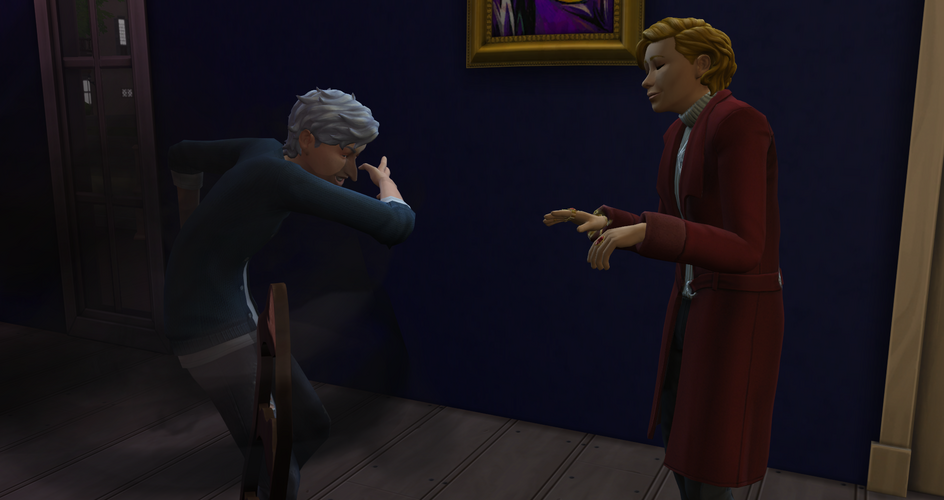 Epimetheus went to the local bar in search of a victim. Poor unsuspecting Morgyn doesn’t know what’s about to hit him! 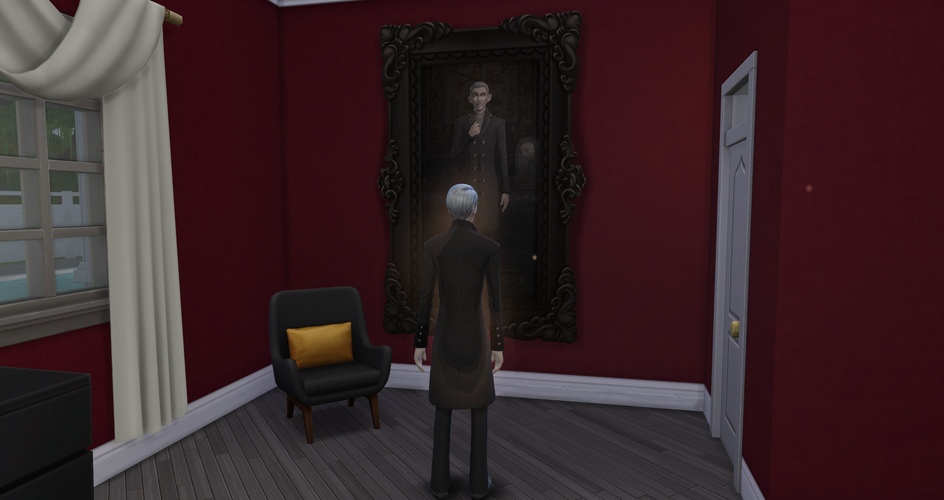 Vlad: I found one good thing about the house. There’s a huge portrait of me on the wall.

Really? That’s the only thing? 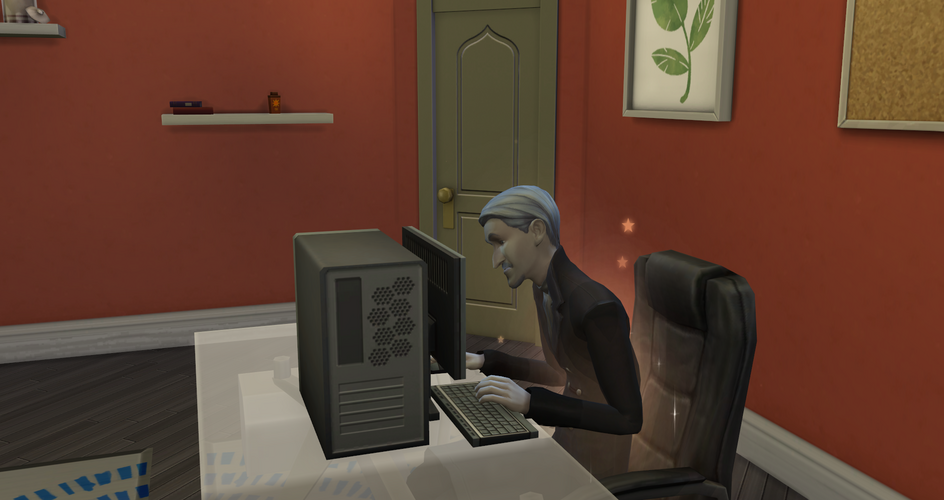 I thought we could try to complete the postcard collection so I had Vlad go online in search of a penpal.

Vlad: But I don’t want any more ‘pals’. I don’t hold with unnecessary social interaction. 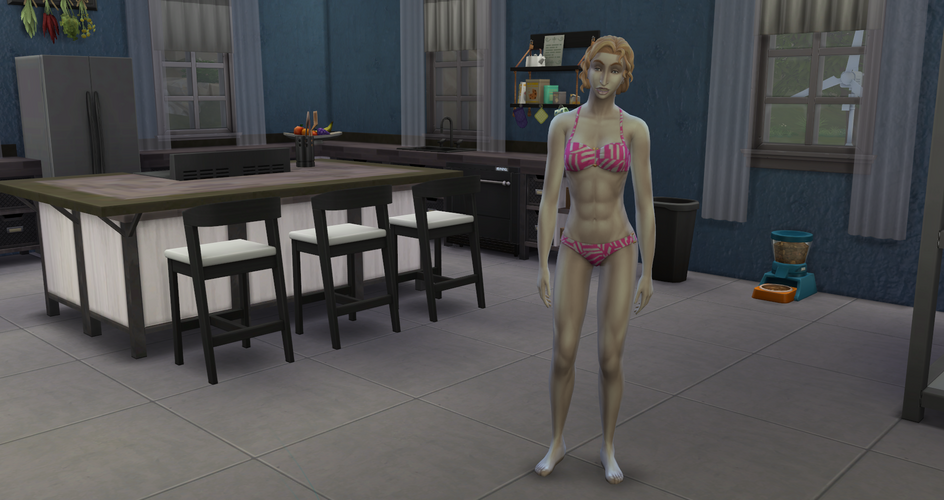 Circe showed off her muscles. She looks like she is about to enter a bodybuilding competition in that bikini.

Circe: What would be the point? I’d probably lose. I always lose everything.

Well it’s true that you lost the heir poll, but you still came second.

Nice to see that gloomy trait coming through again. 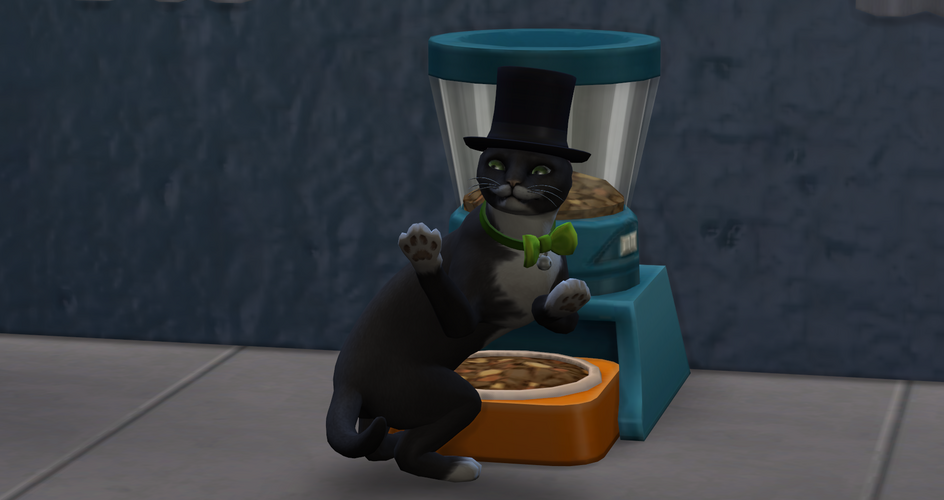 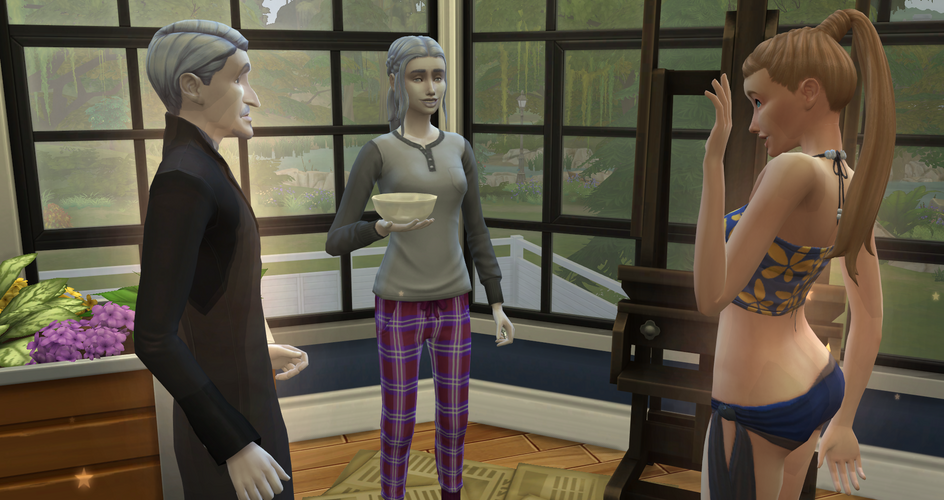 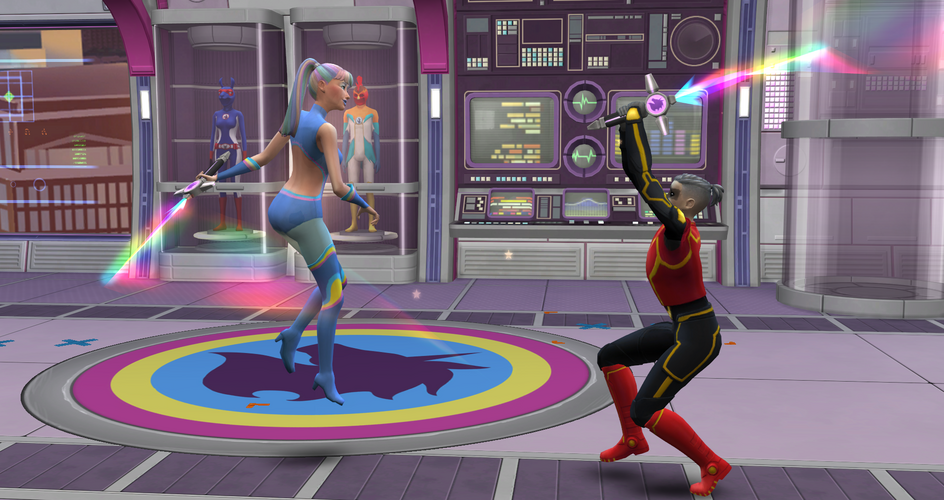 Caly did the acting gig with the rainbow lightsabres.

Caly: Surrender or die, mortal minion of Zeus. You are no match for the might of the great demi-goddess Calypso! 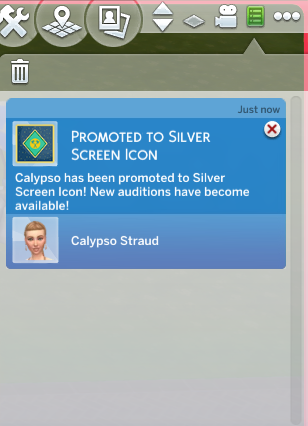 Caly reached level 10 of the acting career! First career of the legacy to be maxed. 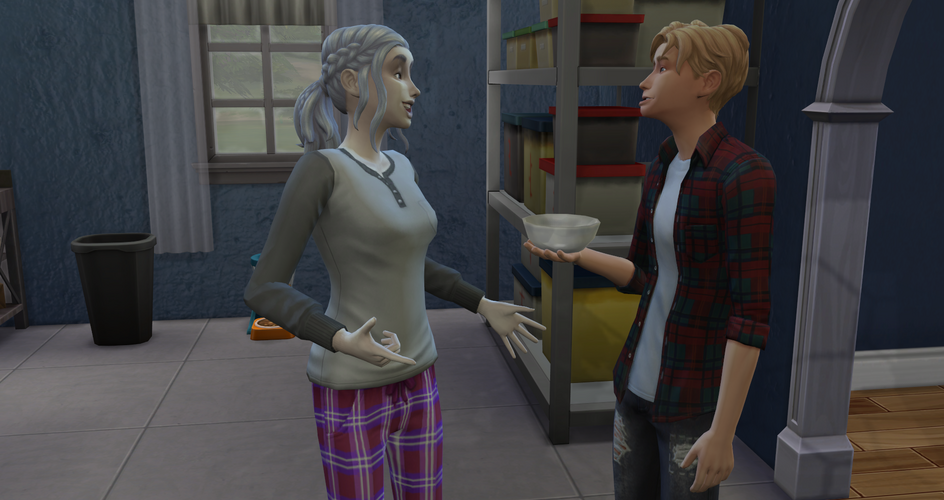 Atlas: Yo, I can’t believe I only got 2 votes in the heir poll and you got 40. That’s like so messed up.

Atlas: Whatever dude, I didn’t wanna be a lame ass heir anyway. 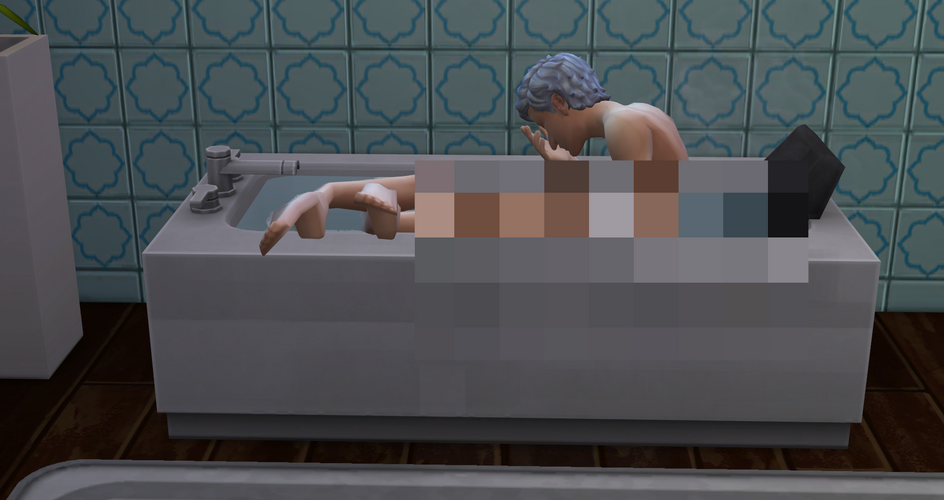 Epi, what’re you crying about?

Epimetheus: My legs, there’s something horribly wrong with my legs!

This happens to Scylla too. It’s because he used to be a vampire-mermaid hybrid. I removed the mermaid life state but his legs go all weird in the bath because I guess the game still thinks he has a tail. 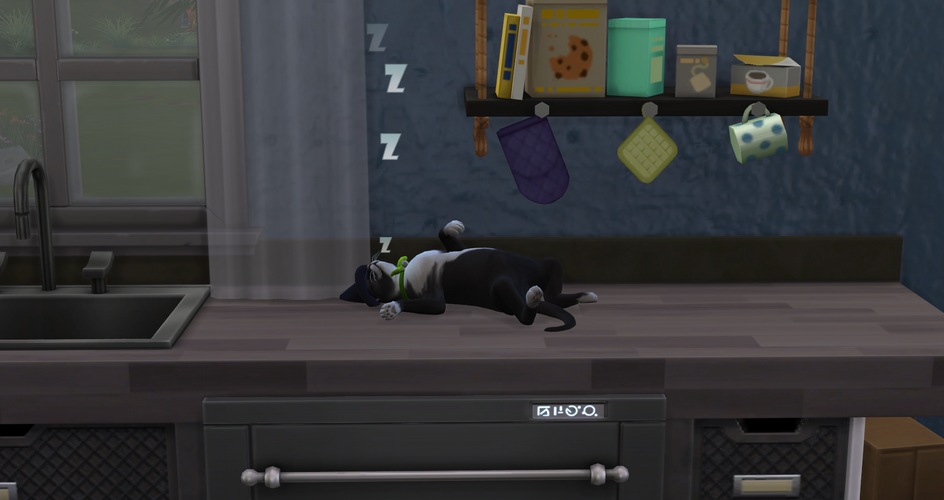 Mayor napped on the kitchen counter.

You have a cat tree! So, why is it that I always find you sleeping anywhere but the cat tree? 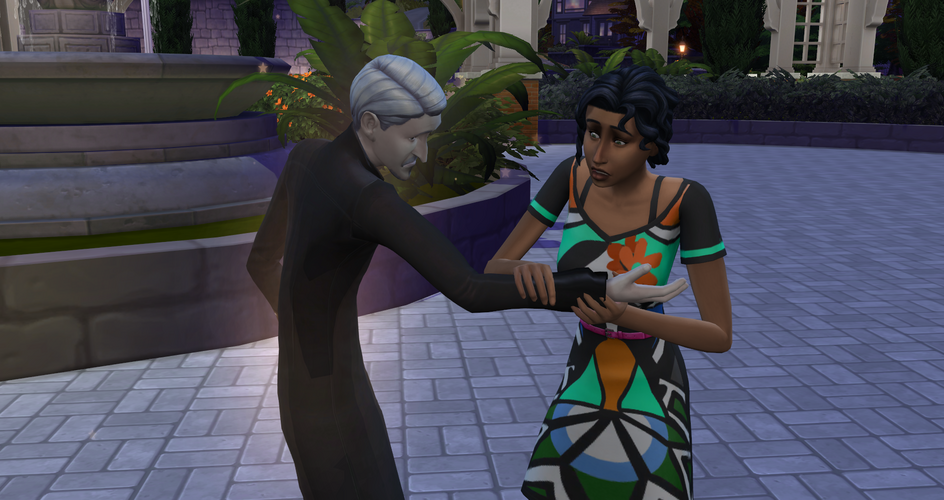 Vlad had to turn 5 sims into vampires for his ‘vampire family’ aspiration. The first lucky sim to receive the gift of eternal life was Tracey Flex, Marcus Flex’s daughter.

Tracey: So if I drink your blood I’ll live forever?

Vlad: Unlive forever, yes. Unless the sun gets you. 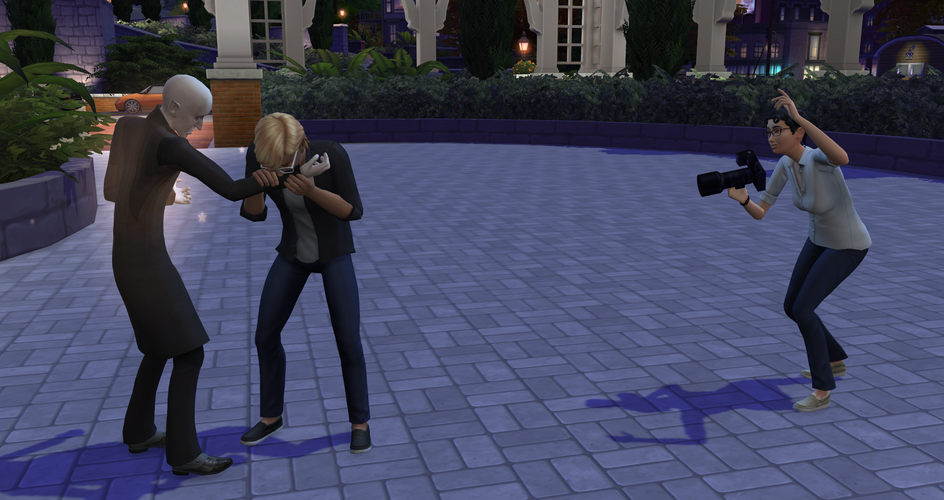 Next, Vlad turned one of a paparazzi who is always following him around called Aleki Kalawai’a.

A second paparazzi called Yumiko decided to capture the moment.

Yumiko: This is going to make a great photo!

Aleki: I’m being forcefully turned into a vampire and your first thought is to take a picture? 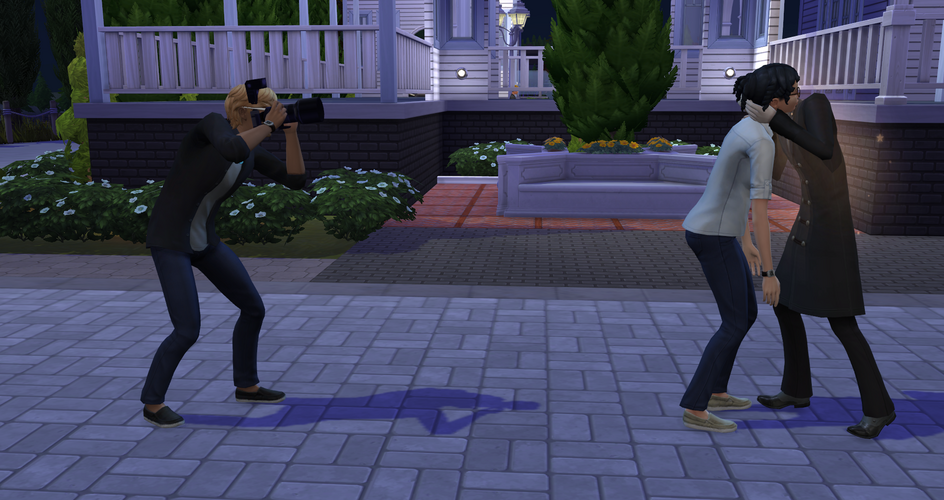 Then Vlad decided to drink from Yumiko and Aleki got his revenge.

Aleki: Nah, I don’t think so. This is going to make a great photo, after all. 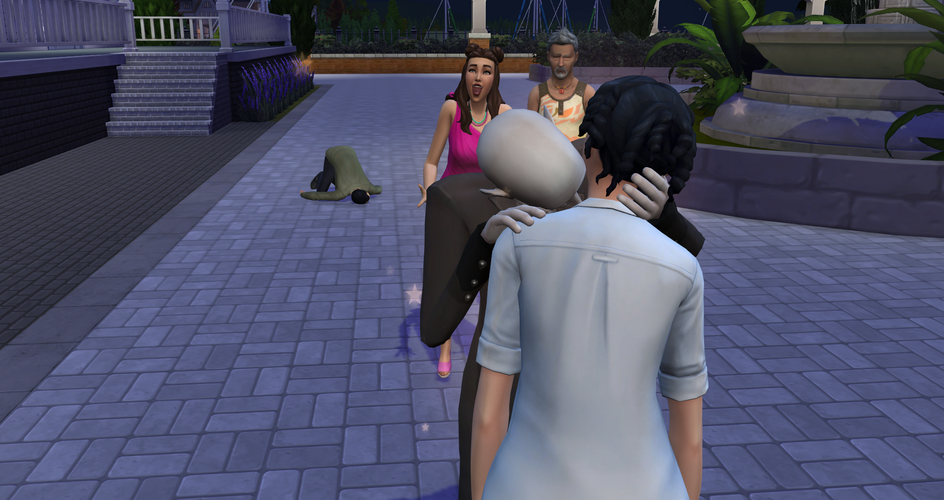 Um Bunny, one he is drinking a woman’s blood which should temper your excitement just a little and two you know him! 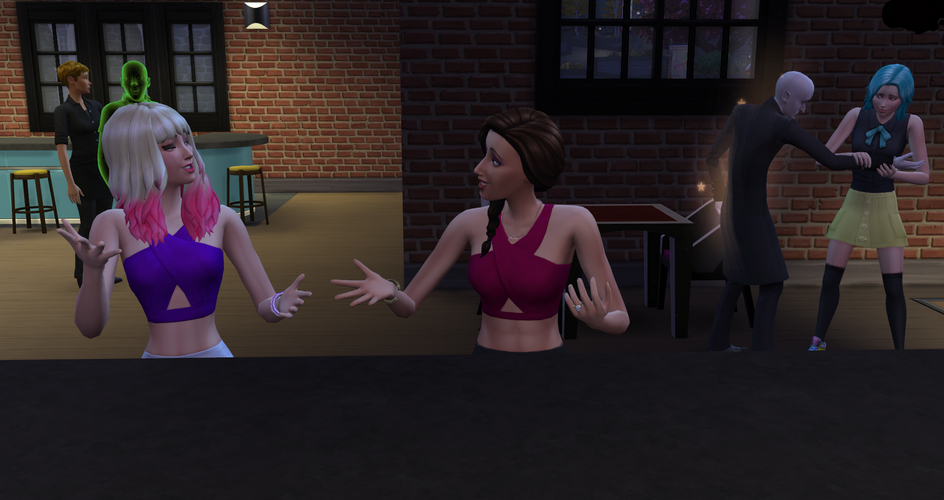 Next up was Yuki Behr.

Jade: Candy, your sister is being turned into a vampire back there. Don’t you think you should step in or something?

Candy: Oh pull the other one! 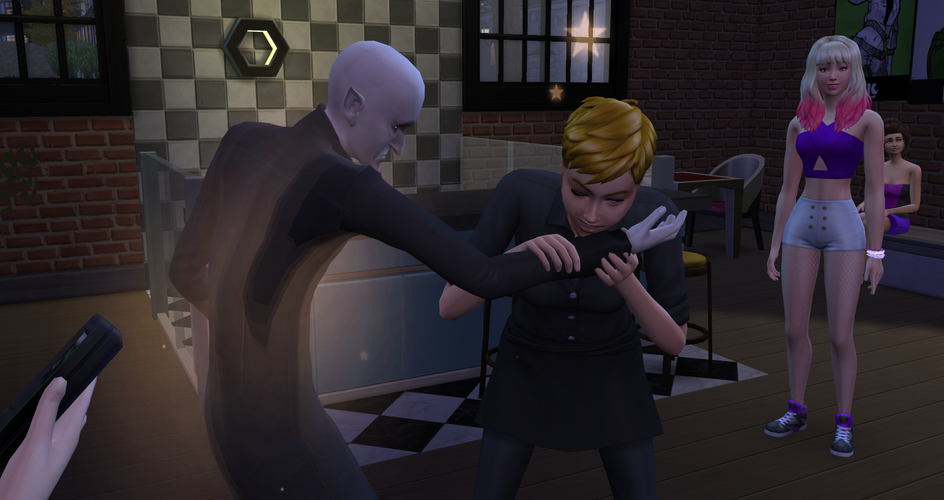 The fourth ‘vampire-to-be’ was a bartender called Juliana Crowley.

Candy: Well what do you know, there really is a vampire here. But he didn’t get Yuki, Jade was just making that part up, right? 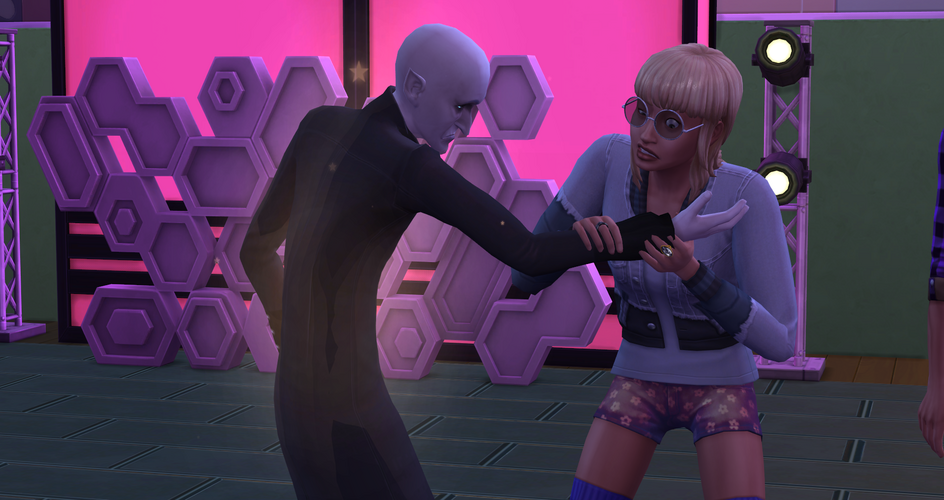 Vlad: I’m sorry did I ask what you want? 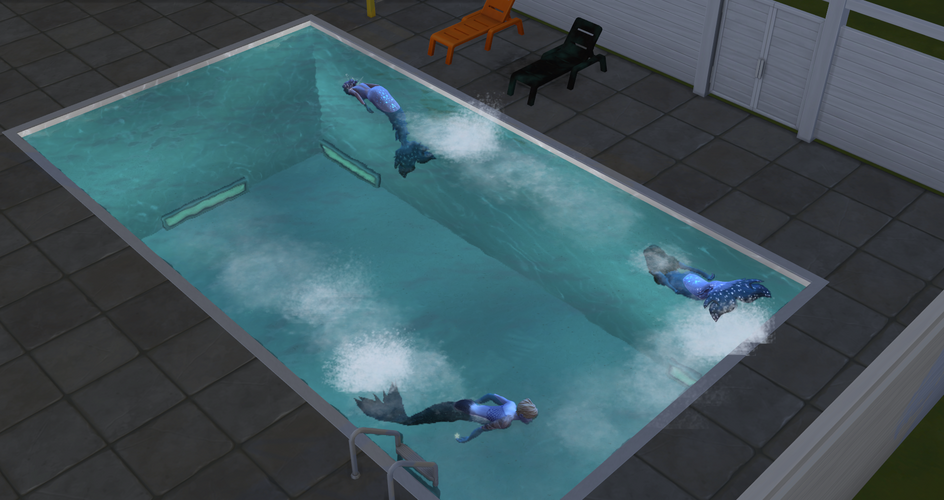 Nothing to see here, just three mermaids swimming in a pool. 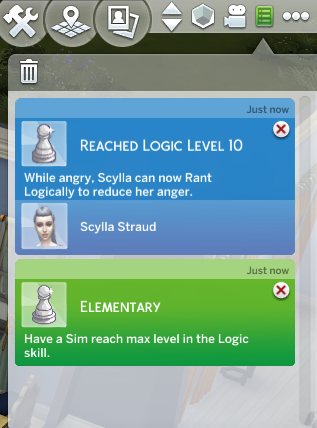 As a result of all that microscope usage Scylla maxed the logic skill. Maybe now she will do better at actually finding the prints…