In the previous chapter, Circe was gloomy, Galatea met Dana Bheeda (her future boyfriend), Epimetheus failed to persuade Atlas that he was not in fact a bear, Vlad completed the world famous celebrity aspiration and started the friend of the world aspiration, Caly completed the master actress aspiration and also began the friend of the world aspiration, the twins became teenagers and I posted the heir poll over on the forums (the results of which will be revealed at the end of this chapter). 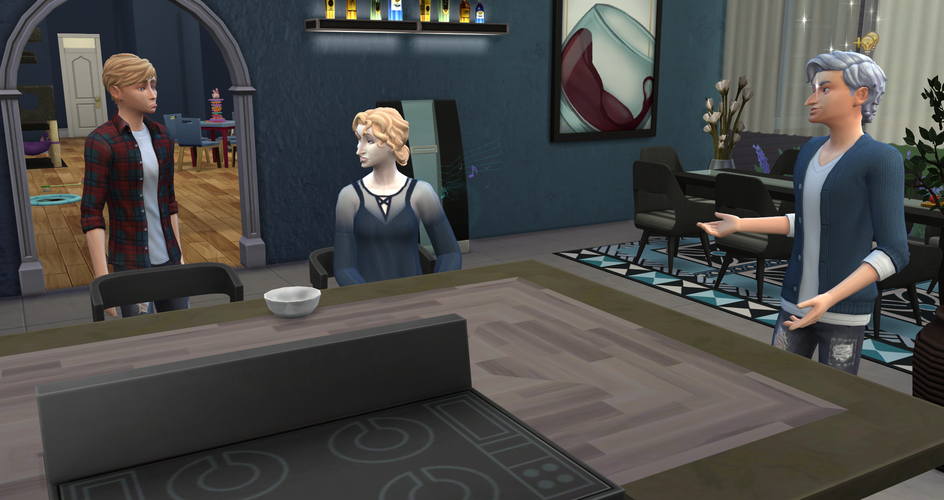 Epimetheus: So, who do you think will win the heir poll?

Circe: I bet it won’t be me. Nobody likes me because I’m ugly.

But he didn’t say she wasn’t ugly 😉 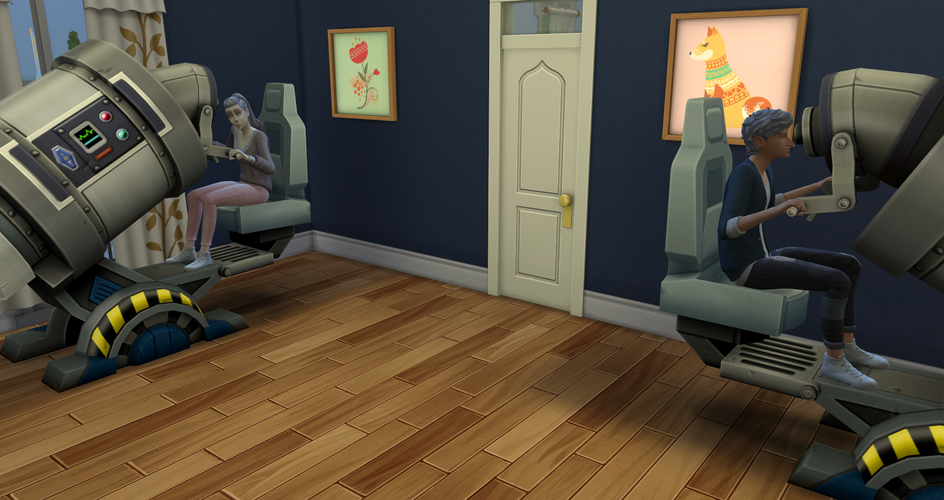 Since I don’t want to complete Epimetheus’ aspiration (the master chef one) unless he wins the heir poll, he joined Scylla on microscope print finding duty.

Scylla: Finally, some company! Staring down the microscope all day by myself has been so boring. 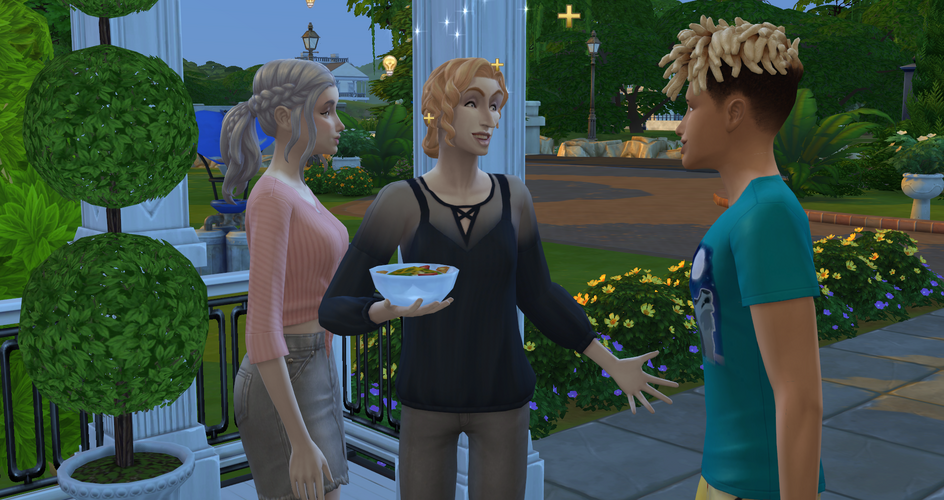 Galatea invited Dana over and Circe inserted herself into the conversation.

Galatea: Dana is mine, find your own boy! I mean… Dana, this is my sister, Circe. Circe, this is Dana.

Galatea: No, neither of us are adopted. Why?

On an unrelated note, I keep forgetting to address it but as you have probably noticed Galatea is wearing the same skirt as Caly. I really wanted to give her this top but I couldn’t find another skirt or a pair of trousers which looked so nice with it. I guess she just raided her mother’s wardrobe. 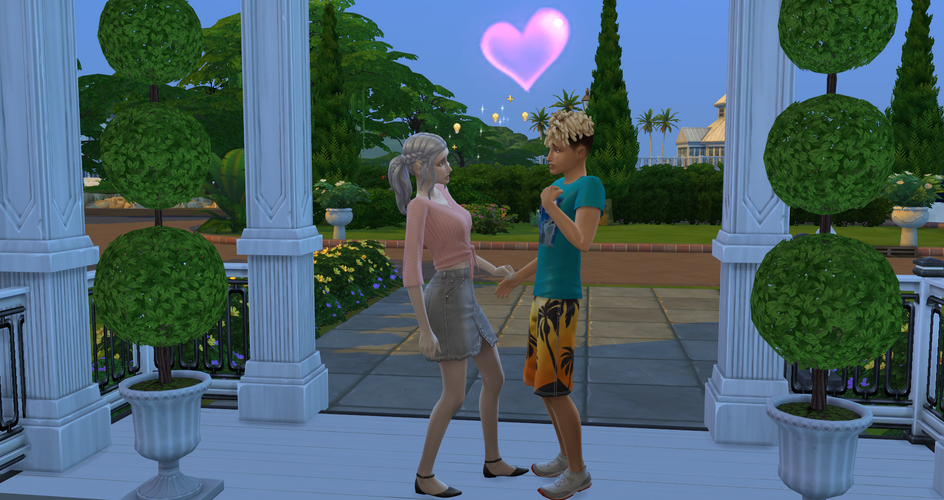 After getting rid of Circe, Galatea and Dana shared their first kiss. And I missed it. So, here is a screenshot taken straight afterwards.

Galatea: How was that? Did you like it? Was it ok? I’ve never kissed anyone before. Oh dear, I should probably shut up and stop blathering, shouldn’t I?

Dana: Relax, it was great.

Galatea: So, on a scale of one to ten, one being the worst and ten being the best…

You are not seriously about to ask him to rate your kissing skills are you? I know you’re a perfectionist but this is taking it a bit far. 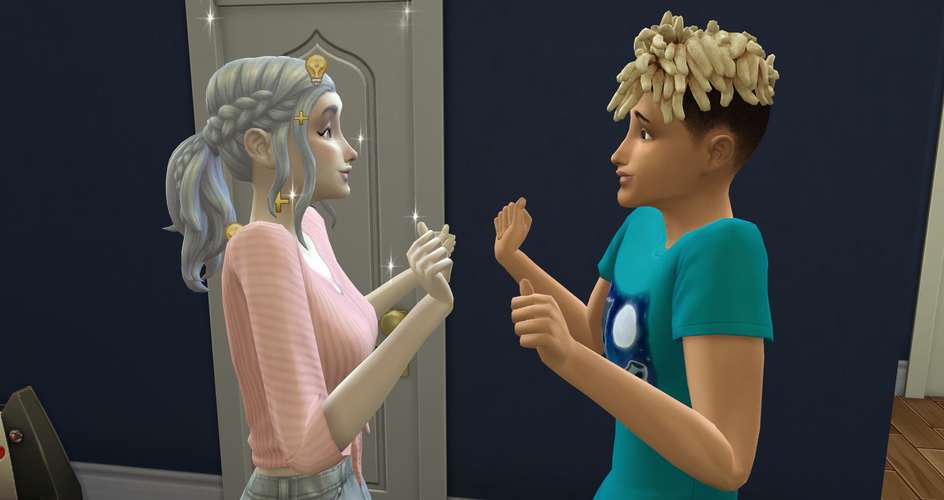 What are you two looking so happy about?

Galatea: We’ve just made it official, we’re boyfriend and girlfriend!

Dana: We’re going to be together forever, I just know it.

Galatea: Yes! Unless I win the heir poll. If I win, then I’ll have to dump you. 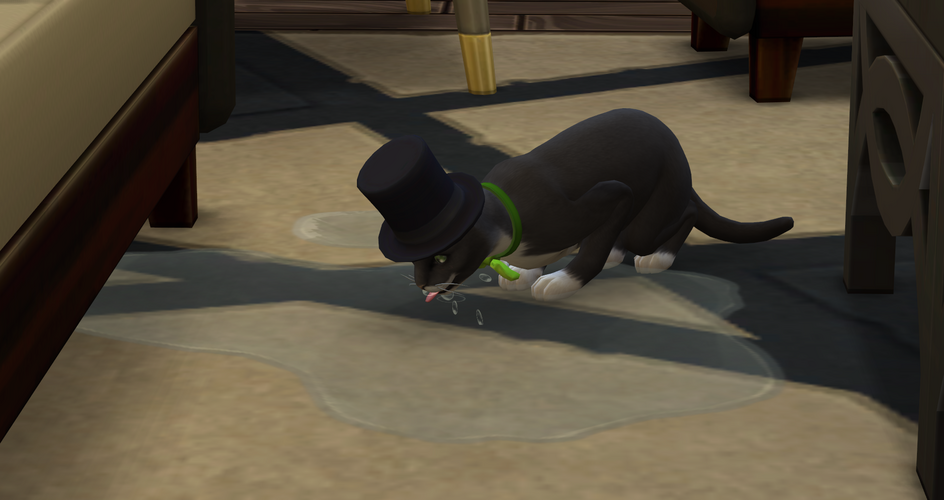 Mayor Whiskers drank from a puddle of what could only be either urine or drool from his recent illness. Either way: yuck! 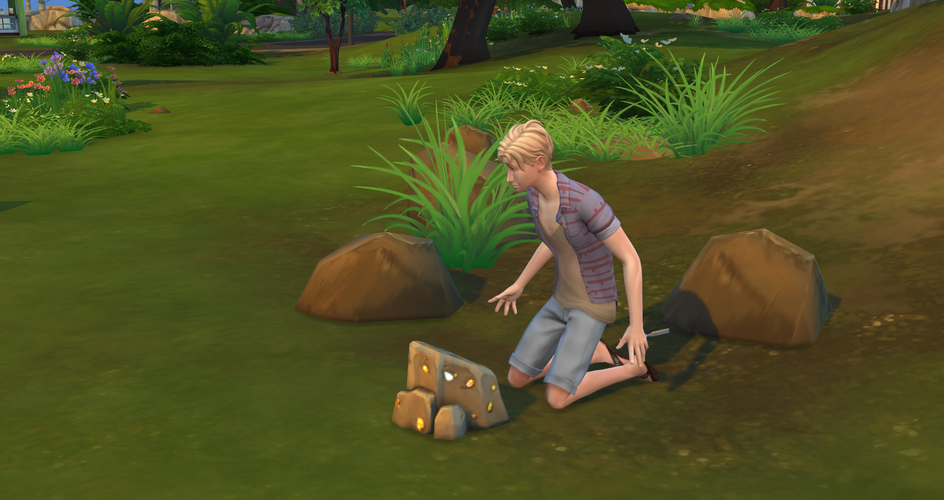 I made Atlas go about digging up all the collectibles near the house. We’re still not doing very well with collections.

Atlas: Awesome! There’s totally like precious metal in this rock. Maybe it’s gold! Am I gonna be rich? 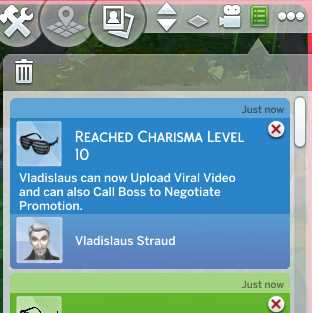 Vlad maxed out the charisma skill! That’s one task ticked off for his aspiration. 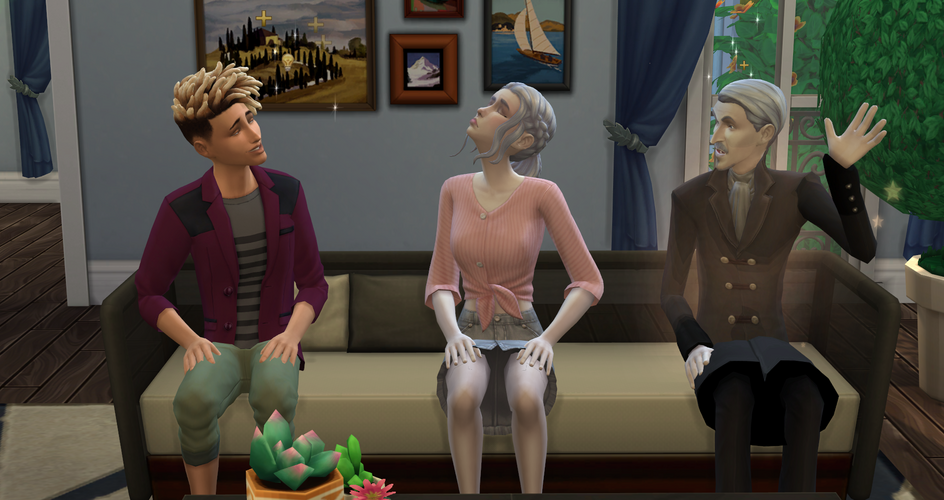 For her aspiration, Galatea needs to go on two dates so I had her go on a date with Dana… In her own house.

Vlad: So, you’re my little girl’s beau are you? Well, all I’ve got to say is this: if you hurt her I will have your blood. Every last drop of it.

Galatea: Daaaaaad, stop being so embarrassing!

Dana: Gulp. Of course Mr Straud sir. I’d never hurt Galatea, you can count on me. 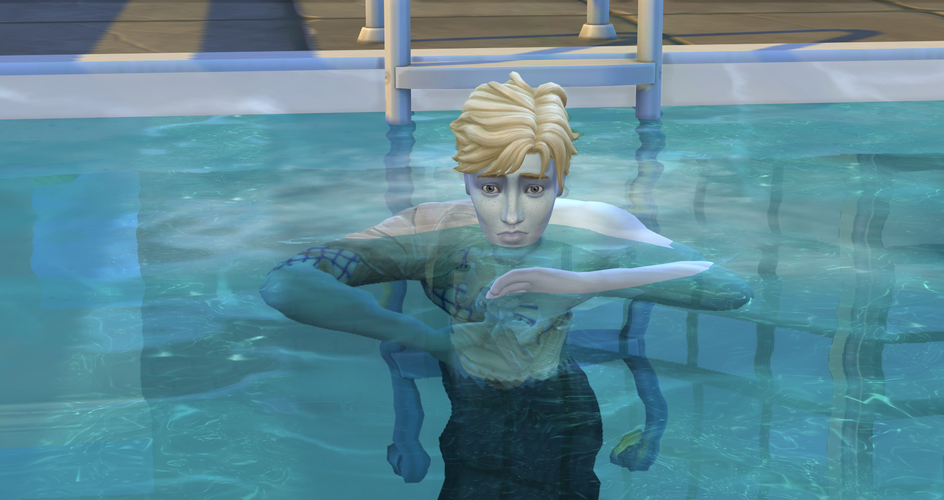 Look, Atlas’ beautiful mer form! If only you looked like this in your normal form you might have had a chance of winning the heir poll, Atlas.

Atlas: Are you, like, telling me that I lost? Not cool, dude!

Officially: no, that has to wait until the end of the chapter. Unofficially… Yes. By a lot. 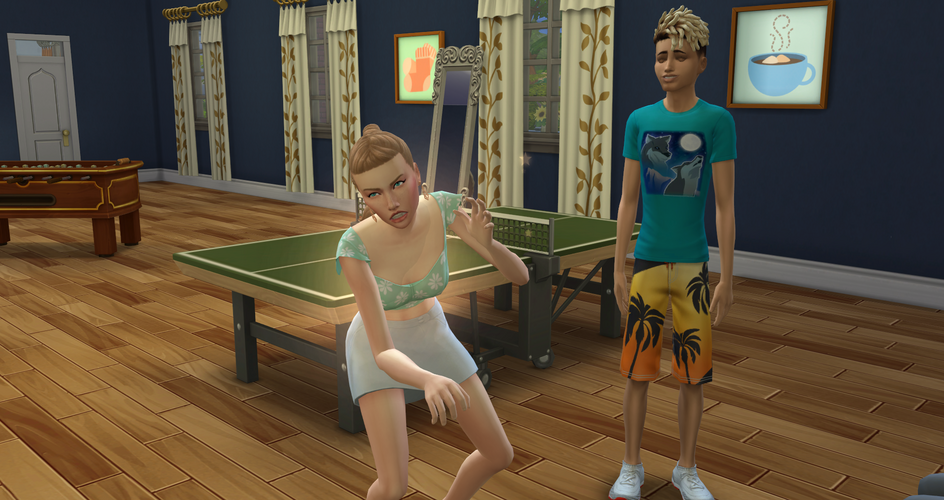 Dana: Hi Mrs Straud, thank you for letting me visit. You have a lovely house.

Caly: Shhh can’t talk now, Zeus’ spies are here again. Shoooo! Go on, I see you lurking in the corner there, get out right this minute! 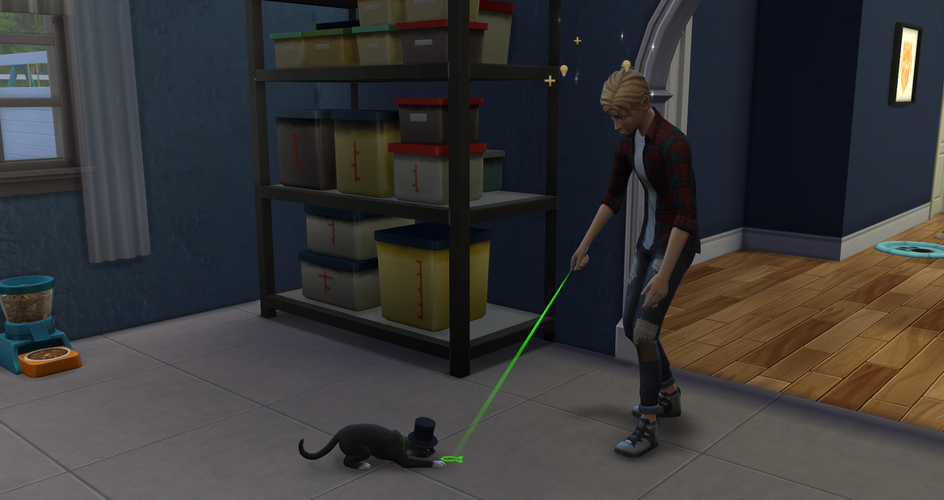 Atlas: Dude, this laser is such a let down. I thought lasers were meant to do cool stuff like burn holes into the floor.

Mayor: Grrr somehow this fish keeps slipping through my claws, almost as if it’s made out of nothing but light. One day little fish, one day I will have you. 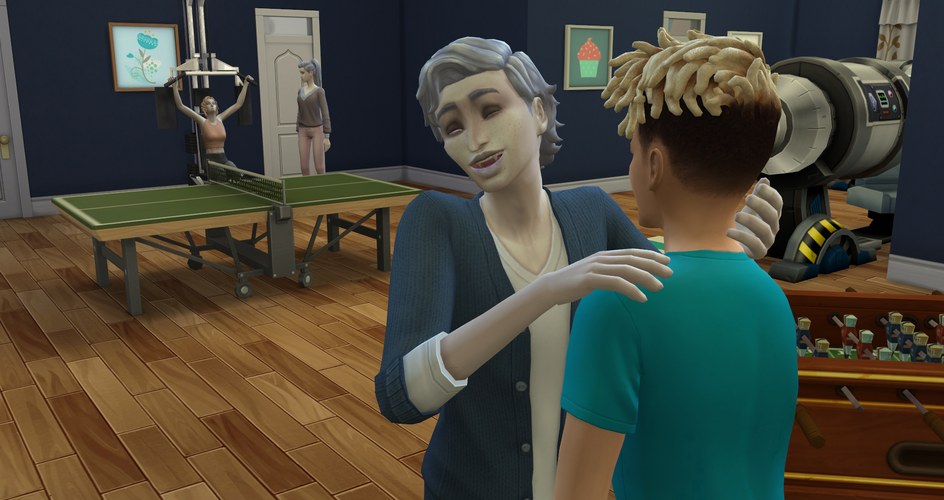 Epimetheus: I like this boyfriend of Galatea’s, very good plasma.

Circe: Um are you forgetting the time you drank from your sister? Aka me?

Scylla: That was completely different. I had a score to settle. 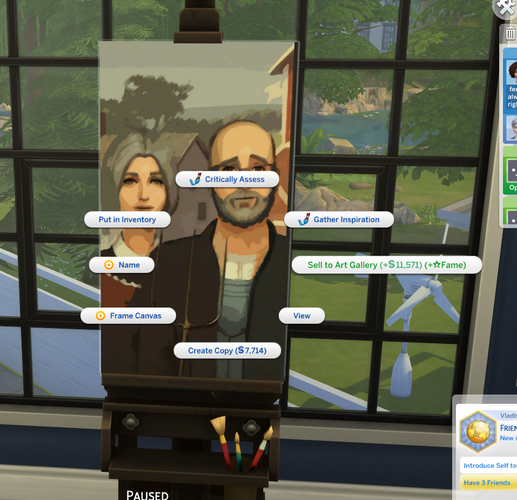 Vlad did a painting worth 11,571 simoleons. That is probably the most expensive painting I have seen a sim produce. 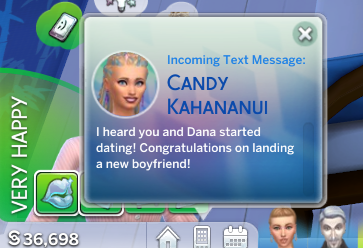 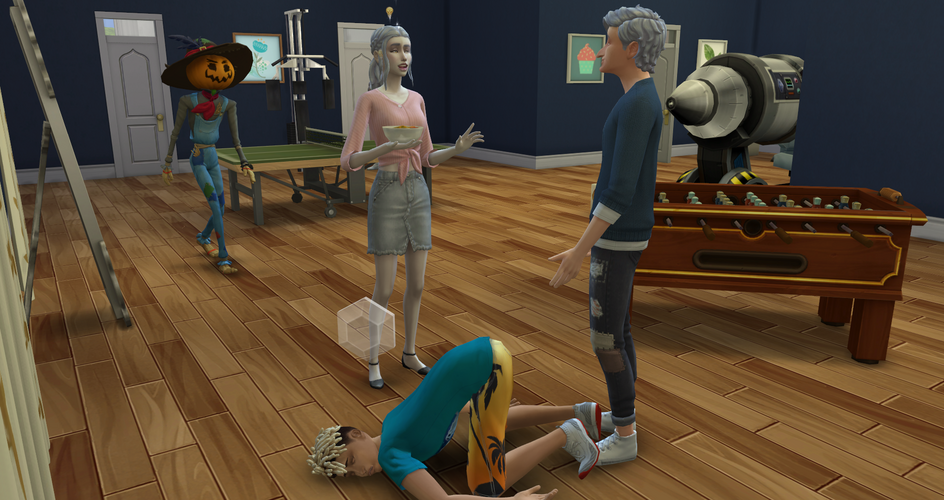 Galatea: Hey, what happened to Dana?

Epimetheus: Uh he decided to take a nap.

Galatea: On the floor? In the middle of our date? Boys are weird. 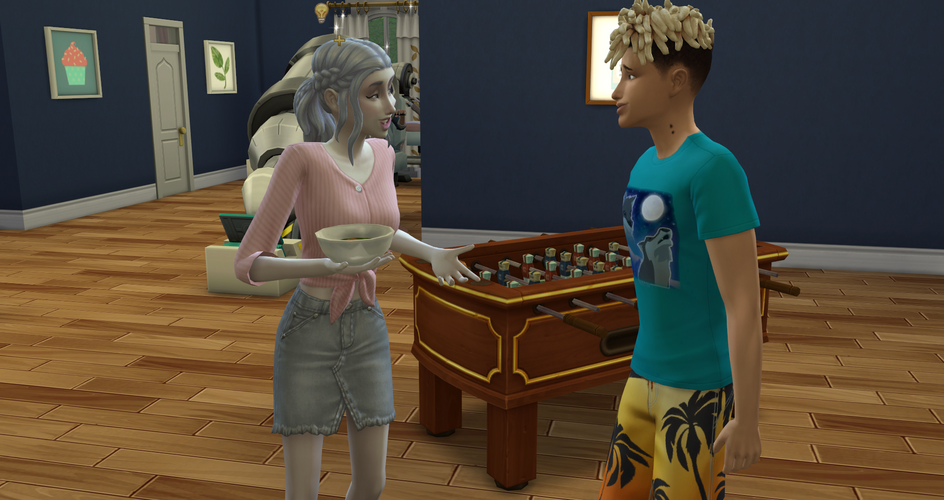 Galatea: Oh good, you’re awake. So, how’d you like my family? 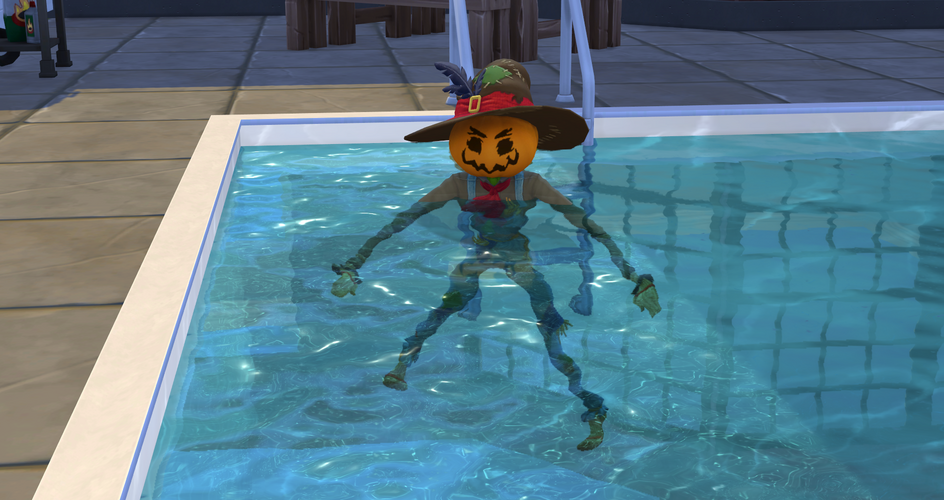 Why is the sight of Patchy swimming in the pool so creepy? 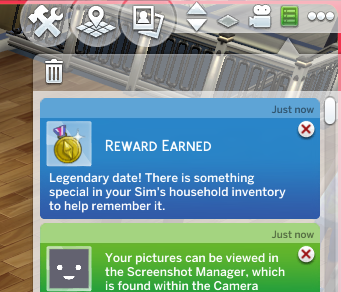 Despite all the weirdness that various family members subjected Dana to, apparently he still enjoyed the date! 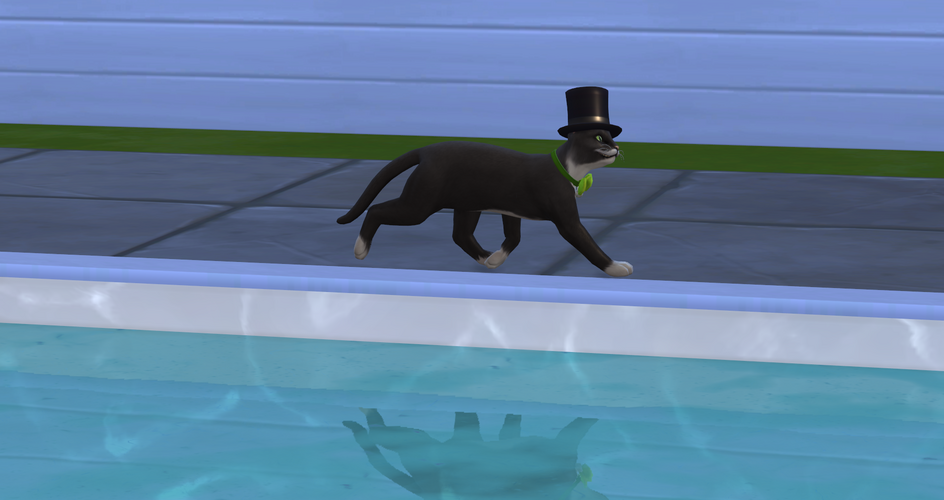 Mayor Whiskers strutting by the side of the pool like he is on a cat walk (pun intended) is kind of adorable. 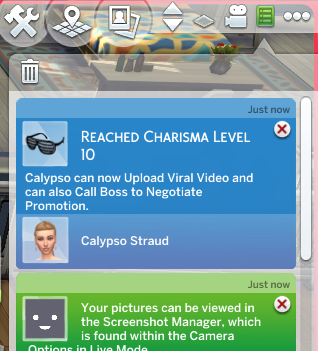 Caly maxed the charisma skill shortly after Vlad managed it. Now they just need to do several instant besties introductions to quickly acquire the number of friends that they need and they will both be done with the friend of the world aspiration. 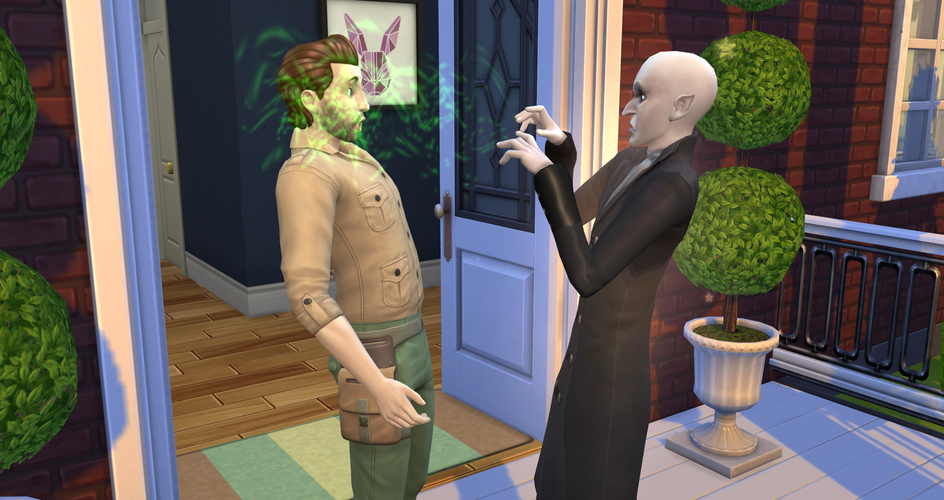 Vlad: You rejected an autograph from me. I do not forgive that impertinence. 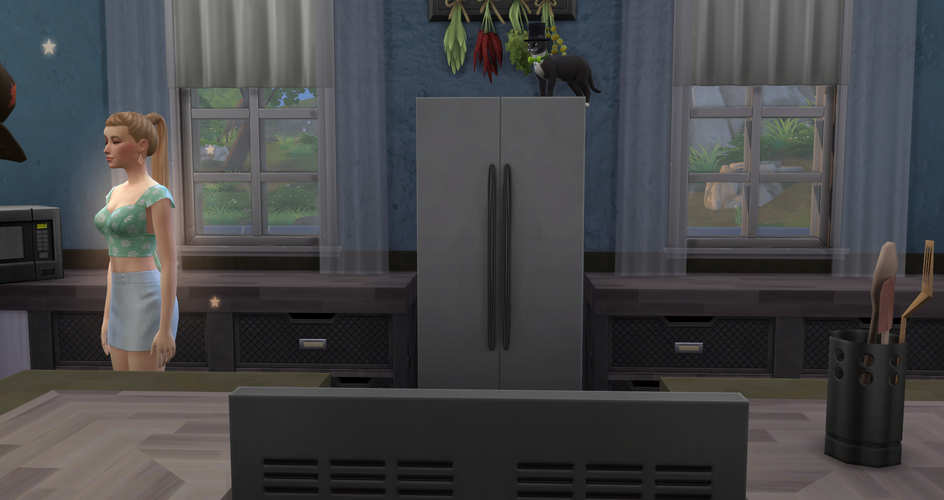 Caly: Where on earth did that cat get to?

Can you spot him? To be fair it’s not difficult. 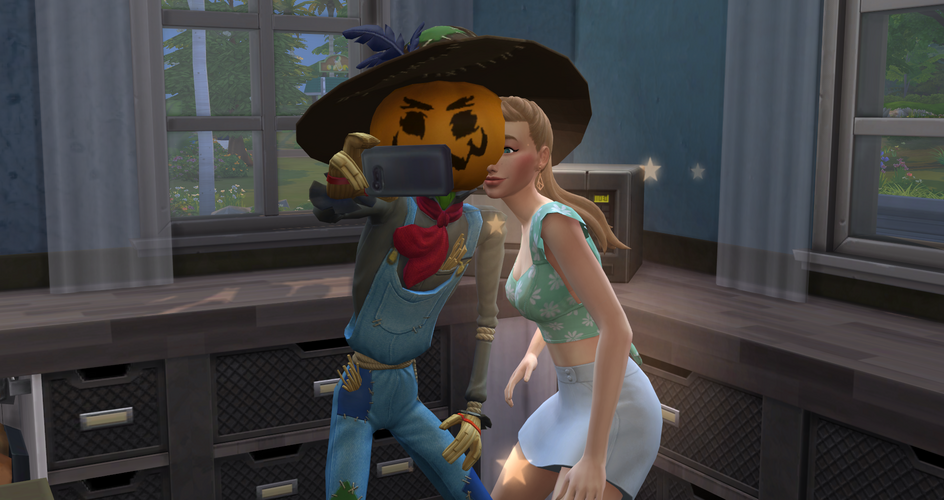 Turns out that Patchy is a fan of Caly’s because he requested a selfie with her.

Patchy: I will treasure this picture forever.

I don’t think it’ll be a great photo somehow since half of Caly’s face is hidden away inside Patchy’s head. 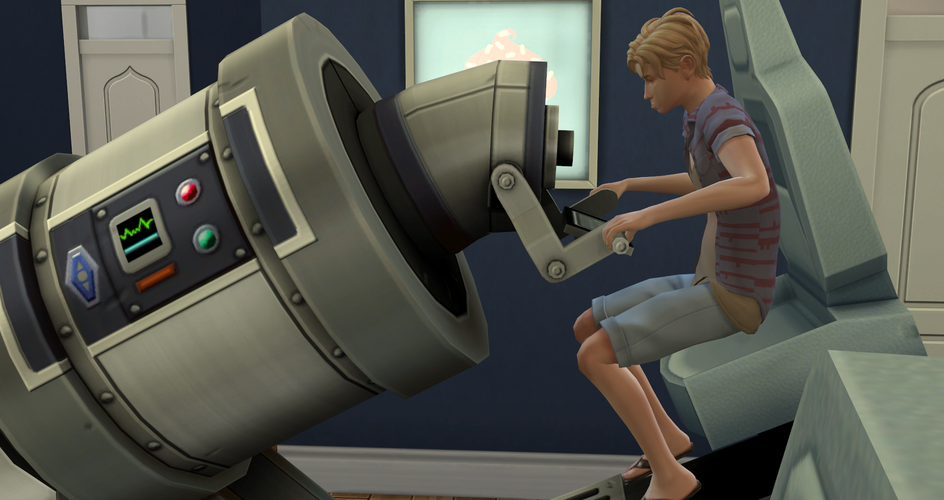 I remembered that Atlas has the nerd brain aspiration and for that he needs to build his logic skill so I set him to work on the microscope too.

Atlas: Far out, dude! This machine is all like, futuristic and shit.

You will get bored of it soon enough, my friend. 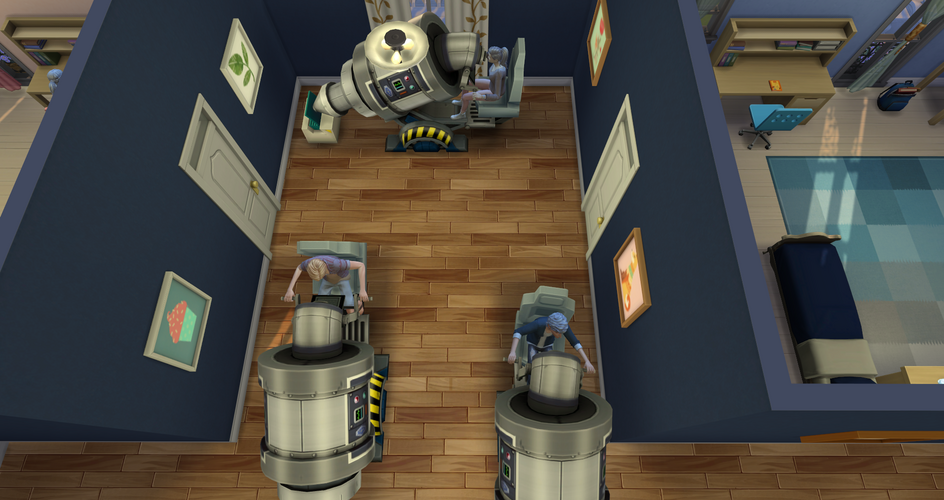 With three sims working on it, I’m bound to complete the microscope prints collection sooner or later, right? 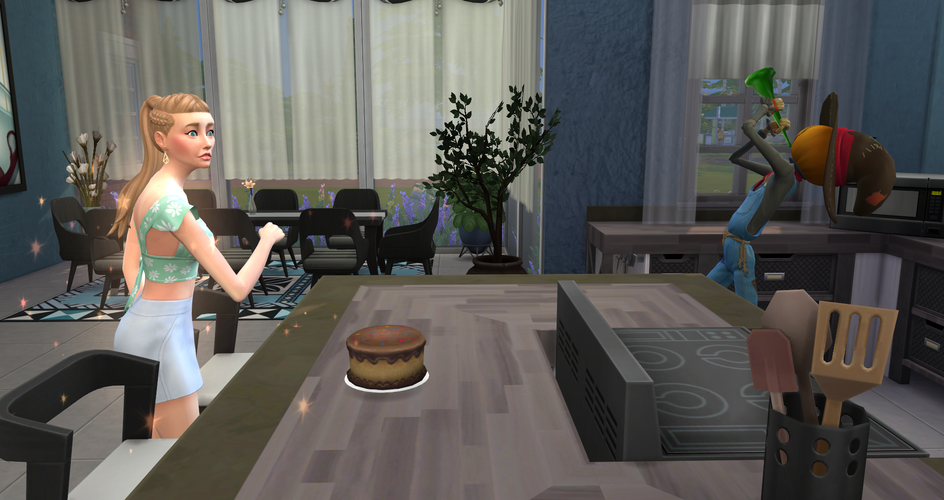 Caly finally became an adult (all those babies froze her aging for quite a while). I almost forgot it was her birthday but thankfully I noticed her age bar sparkling in time to get her to blow out the candles on a birthday cake.

Caly: I still look as youthful as ever, right? 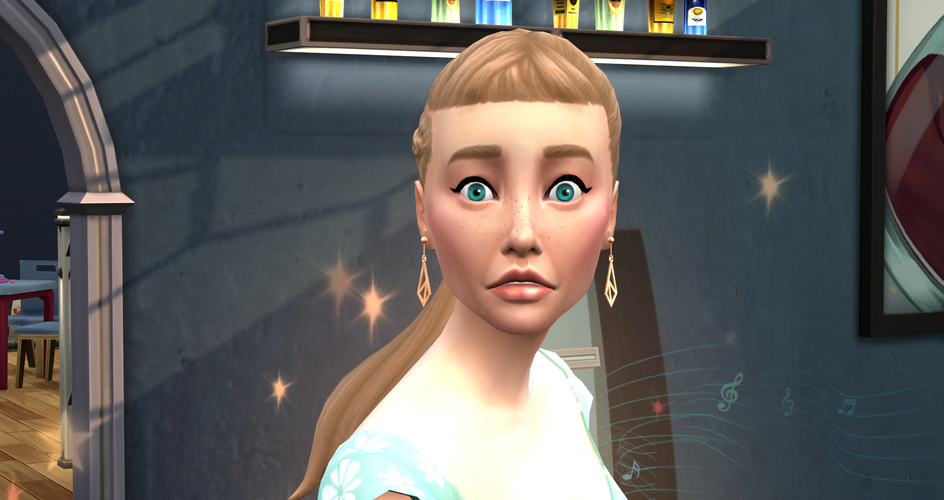 Well actually if I zoom in I can see your wrinkles.

Caly: Don’t you dare ever zoom in again. 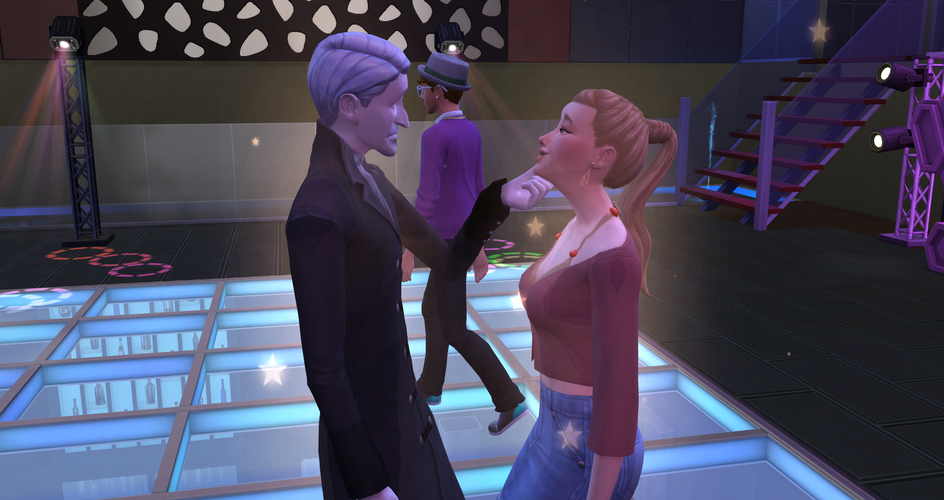 That evening, I sent out Vlad and Caly to make friends for their aspirations (that will be in the next chapter). But first they spent some time with one another.

Caly: The evil voice said that I have wrinkles now. Be honest, am I still the most beautiful woman in the world?

Vlad: You’re the most beautiful woman in the universe.

I promised the results of the heir poll and here they are! 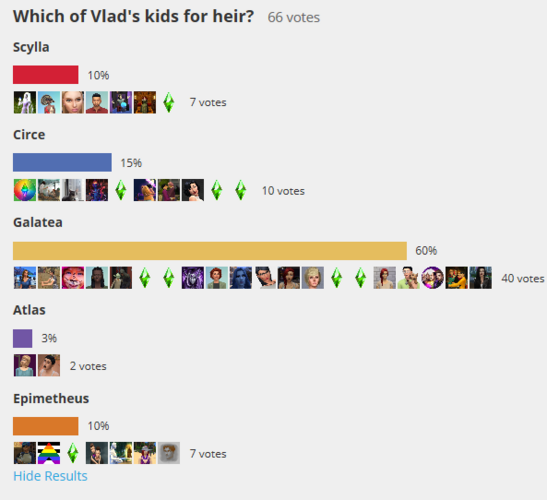 As you can see, Galatea won by a large margin so she will be the gen 2 heir (oh dear, poor Dana). Thank you to everyone who voted and look out for the bachelorette casting call thread which will be opening when Galatea is nearer to her YA birthday.