In the previous post, Circe became a teen, Caly got naked (a lot) and Scylla got struck by lightning. That about sums it up, I think! 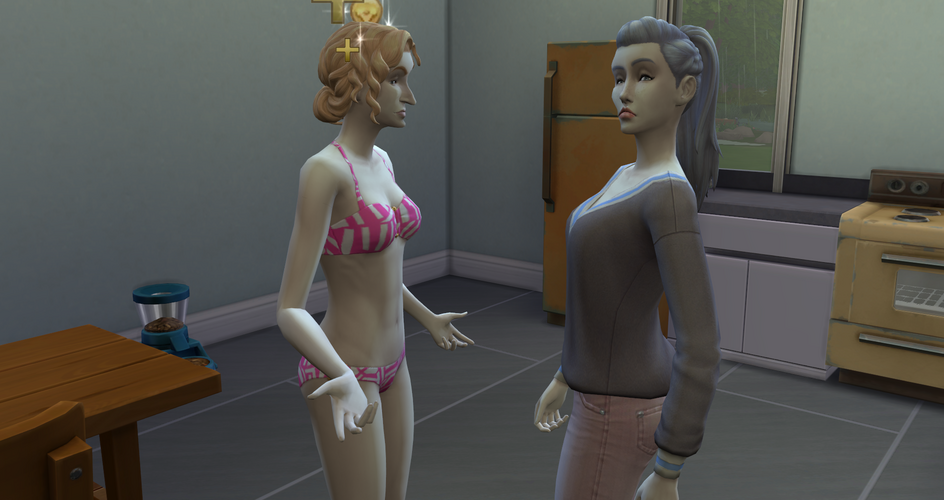 Circe: Want to head to the gym with me? I could use a workout buddy.

Scylla: Exercise? Me? Ew, no thanks. I get all the exercise I need just reaching for the TV remote. 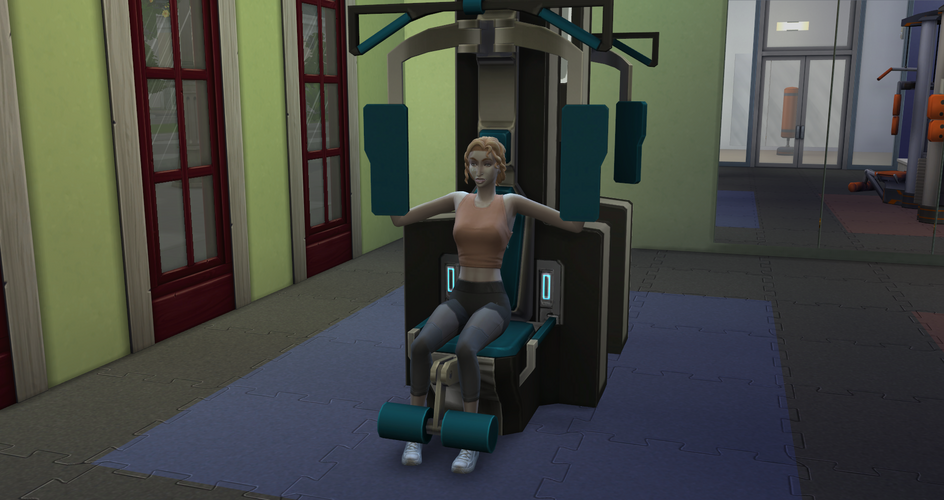 So, Circe exercised alone at the gym for her aspiration. Having fun, Circe?

Circe: I can’t wait to get out of this place, it stinks of B.O. 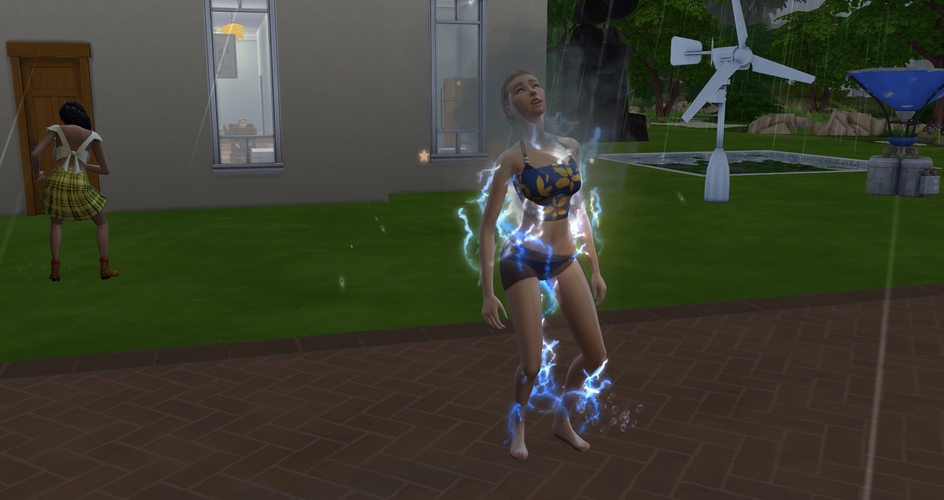 Caly was struck by lightning.

Caly: Arrgh! Oh no, Zeus has found me!

Caly: Yeah. Zeus never forgave Dad for leading the Titans into battle against him and I guess he’s has decided to start punishing me now too. 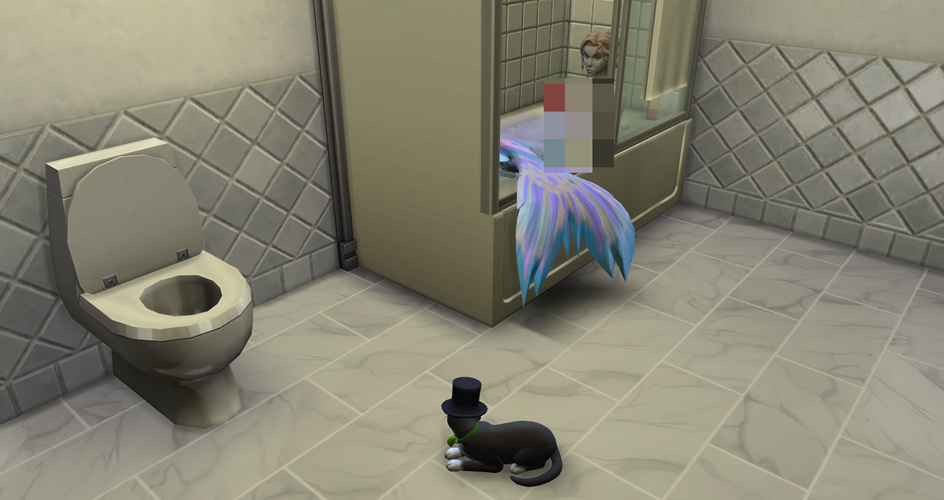 Mayor: Is that a giant fish in the bath? I wonder if I can eat it.

Circe: You bite my tail and you’re a dead cat. 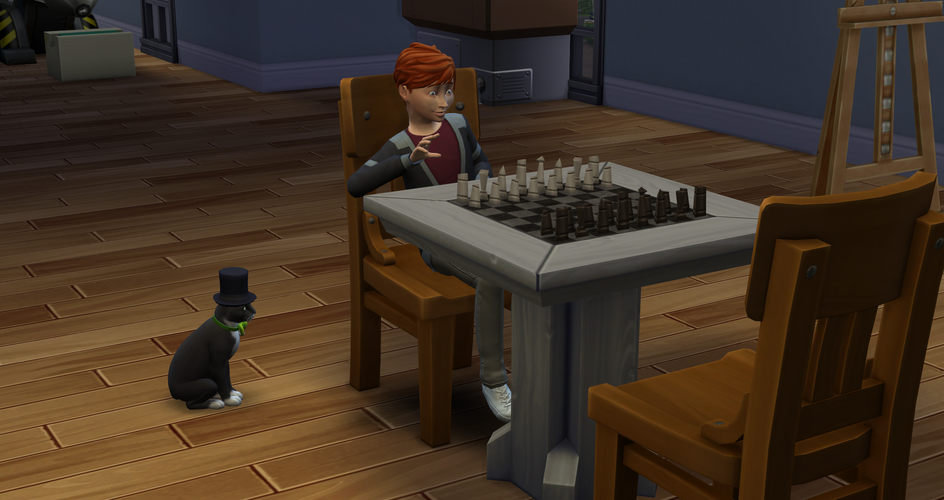 Epimetheus played chess to boost his mental skill while Mayor W looked on.

Mayor: So the aim of this game is to get all the pieces of one colour off the board? Well, Epi doesn’t seem to have the hang of it at all. He’s removing one piece at a time and taking forever about it. If I jumped up onto the board I could push all the pieces of both colours off at once. 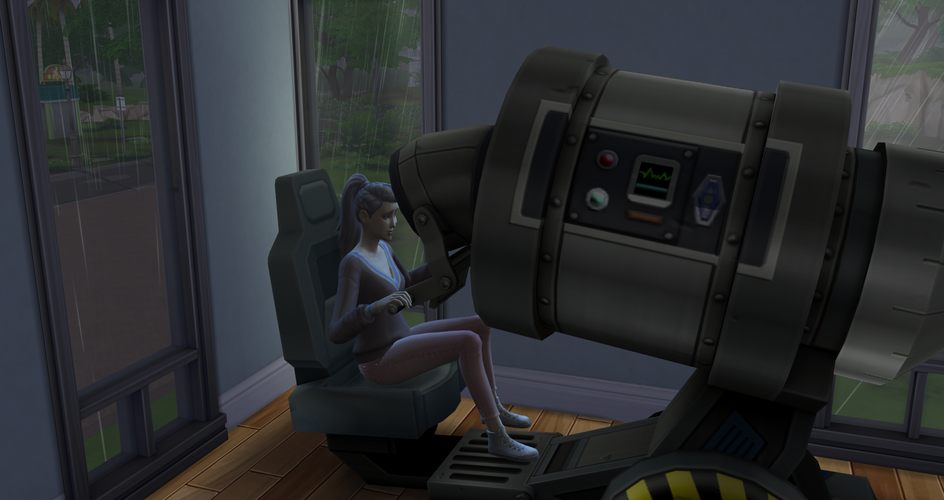 Any more microscope prints for me, Scylla?

Scylla: Does this mean I get to take a nap now? All this work is tiring me out.

You’re sitting down in a comfy chair, not running a marathon! Also: NO. 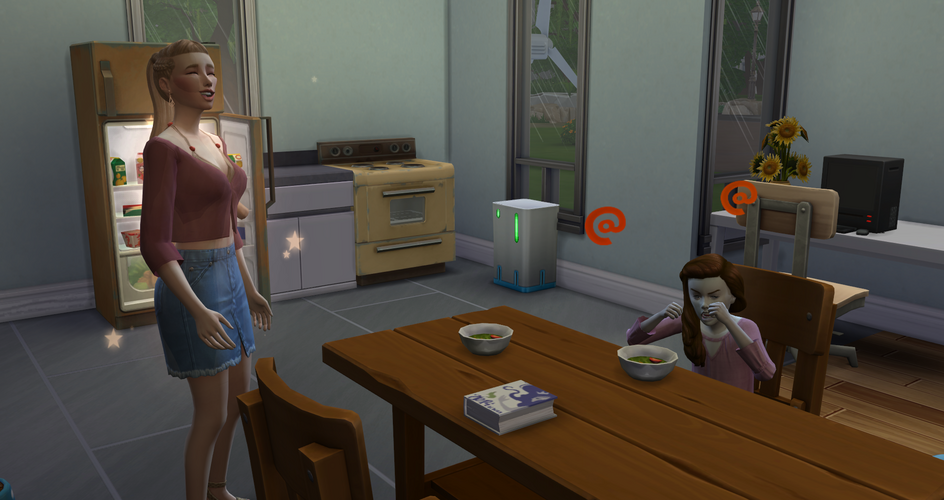 Caly: That’s my girl! You curse all you like at Zeus. 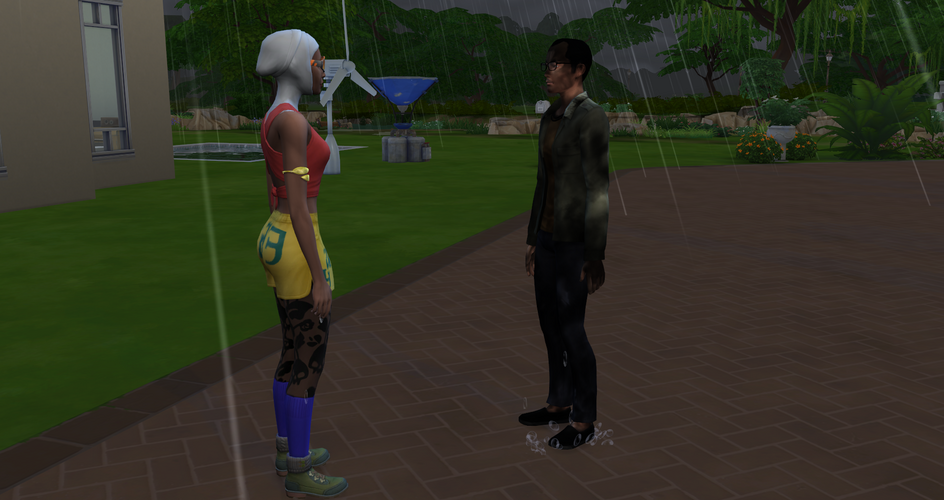 A paparazzi (the guy on the right) outside the house got hit by lightning.

Caly: Zeus must be so angered by the fame and success of Atlas’s daughter that he’s trying to scare off the paparazzi in an attempt to make me fade into obscurity. But, he won’t succeed, my fame is unstoppable! 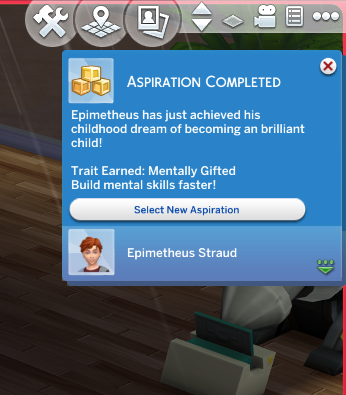 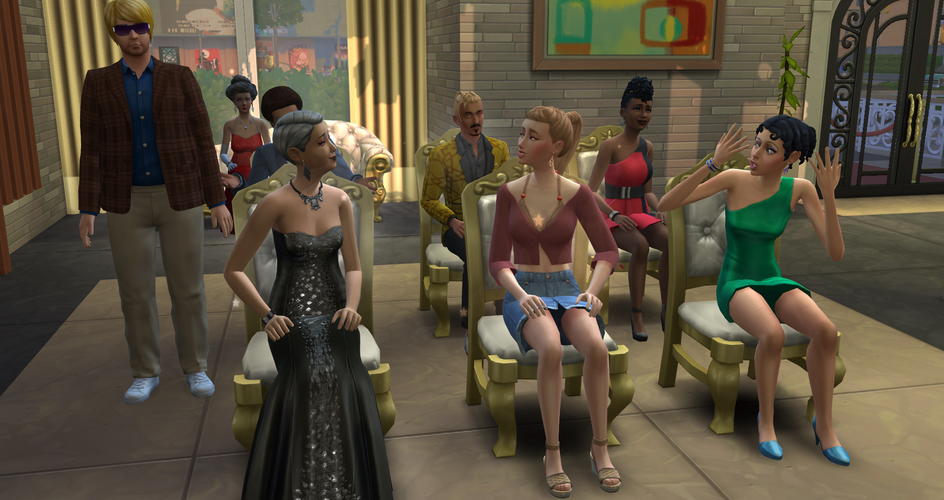 Caly: I’m here to pick up an acting award. What about you, old lady?

Sorry Caly but you weren’t even nominated for an award so I doubt that you’ll win anything at all. We’re just at the Starlight Accolades because you need to win an award for your aspiration and I’ve heard that you can sometimes win an award without being nominated.

Caly: I don’t need a nomination. Dad will make sure I win. 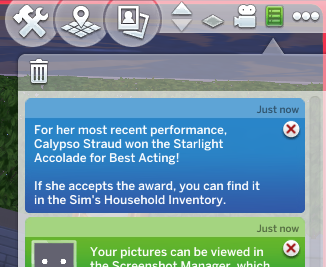 Oh I…. Guess I was wrong. Better get into your formalwear, Caly!

Caly won an award for ‘her most recent performance’. Hang on, wasn’t that just a commercial for Salty Suds cleaning products? 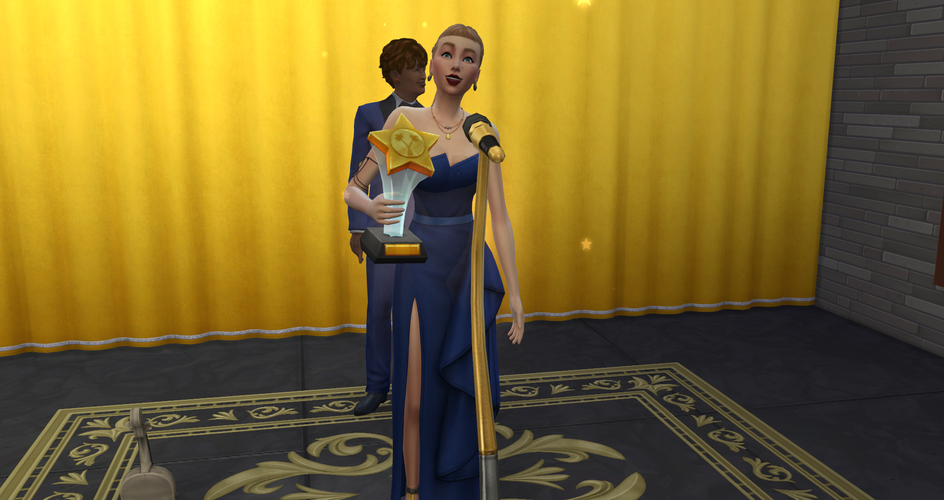 Caly: I would say that this award comes as a surprise… But I’d be lying. So instead I’ll say that I am so happy for all of you – happy that you are fortunate enough to be living in the same era as Calypso Straud and have therefore been able to witness my masterful performances. I’d like to thank my wonderful husband for all his love and support – and of course my father, who has always being there for me, despite the strenuous duties that come with being a God. 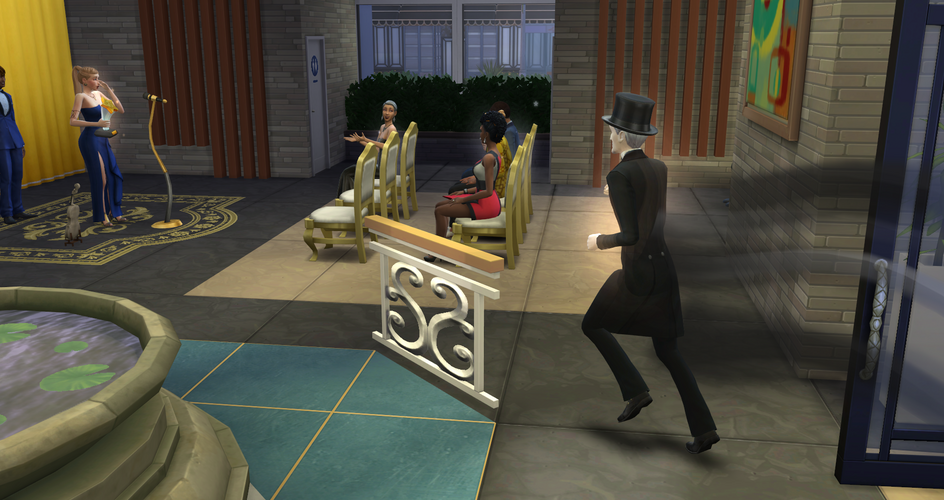 Vlad: Oh yikes I’m late, I’m late! Has she noticed I’m not there yet?

Nah you’re all good. She can’t see further than her own ego right now. 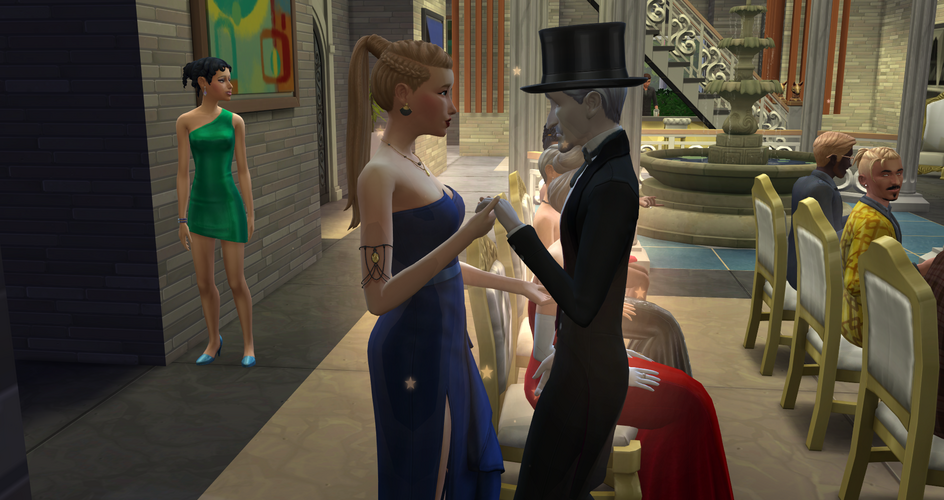 Vlad: Congratulations, my love. Nobody ever deserved an award more.

Caly: Oh, I know! I am unbelievably talented, after all. 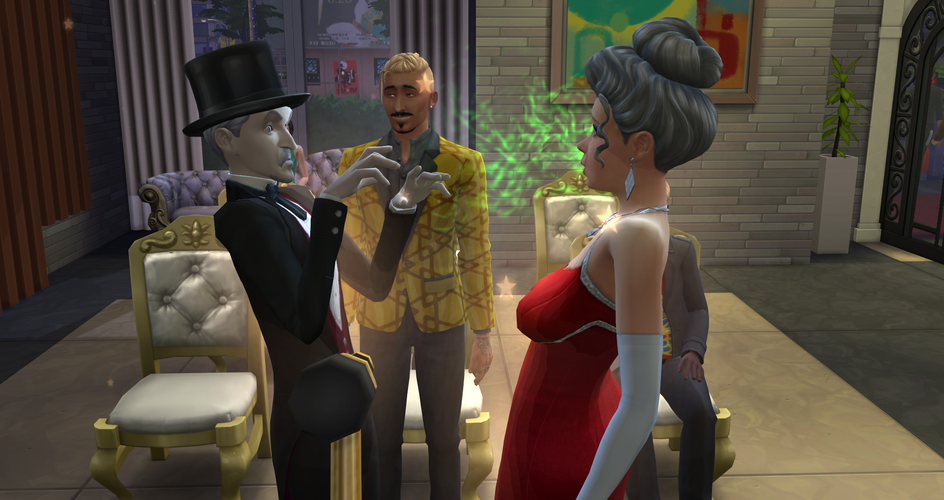 Vlad: Sorry about this, but since you’re my wife’s biggest competition in the acting business, I’m going to have to take you down.

Thorne: What the hell is going on here? 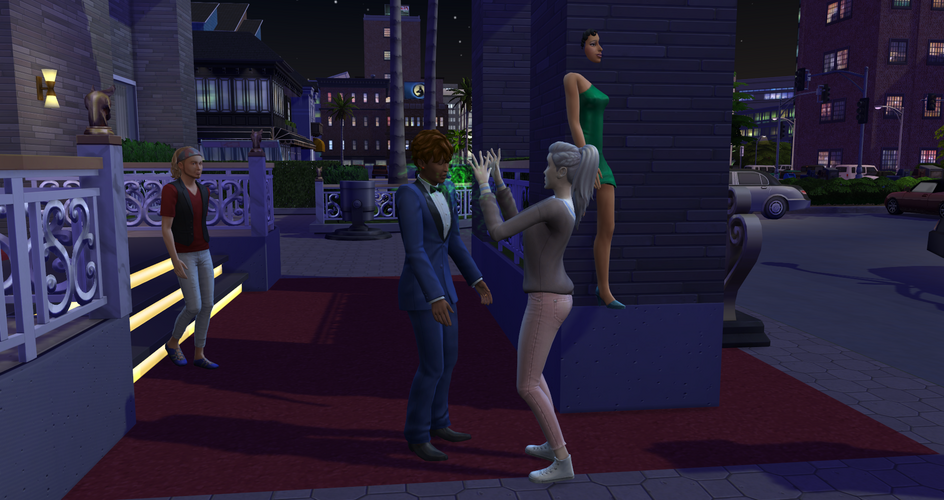 I brought Scylla to the ceremony to grab a drink too. This lady in a green dress was so shocked that she walked right through a wall…. About half a meter in the air.

Scylla: It’s your own fault. I would have settled for a plasma jane at the bar but you jerks wouldn’t let me in because I’m not a celebrity.

Blue suit guy: Maybe we can come to some sort of arrange-

Scylla: Too late! Walking all the way up those steps and to the bar sounds like a lot of unnecessary effort.

In case you forgot, Scylla is lazy. I have just been really bad at giving her a personality so I’ve not alluded to the fact much in her dialogue before now. 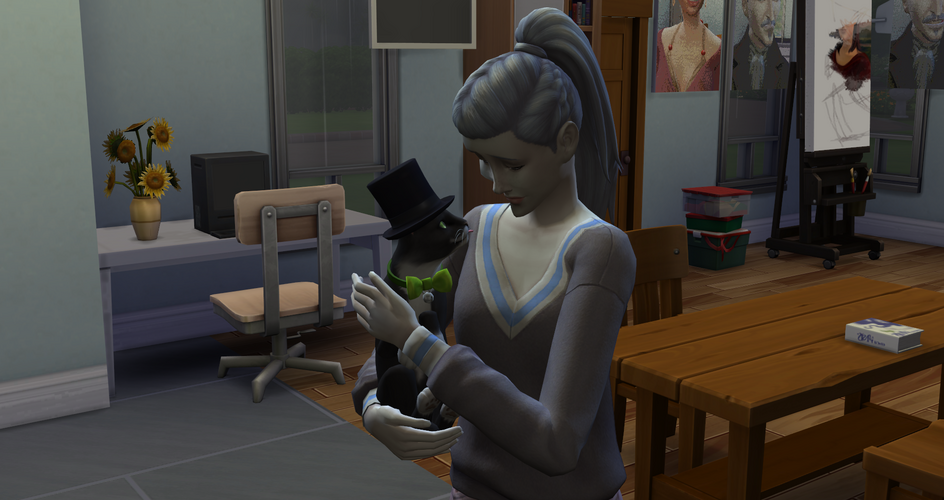 Scylla: I wonder if vampires can drink from cats…

Mayor: You just try it and you’re gonna find yourself missing an eye. 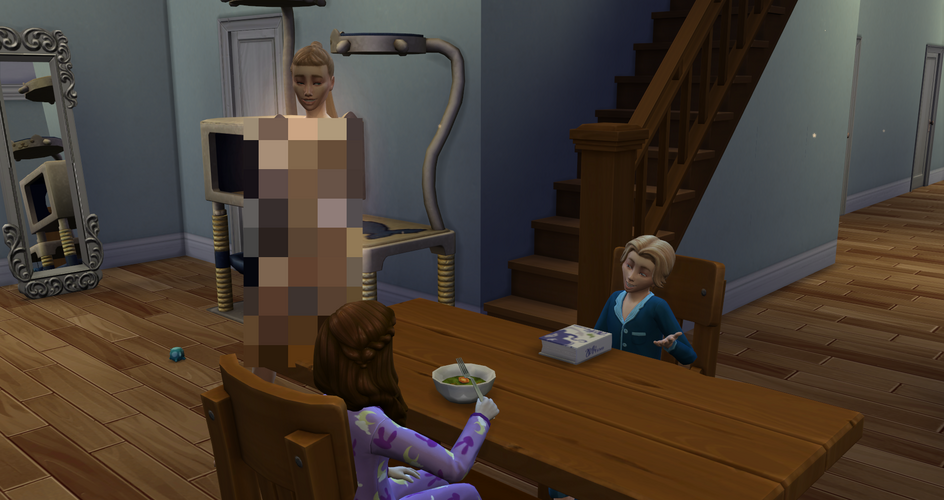 Caly: Hey kids, what’re you up to?

Atlas: We were just talking about… Mum where’s your clothes?

Caly: I’m just heading out for a quick shower in the rain. Nymph thing, you know.

Galatea: Suddenly I don’t feel like eating anymore. Time to burn my eyes out, I guess. 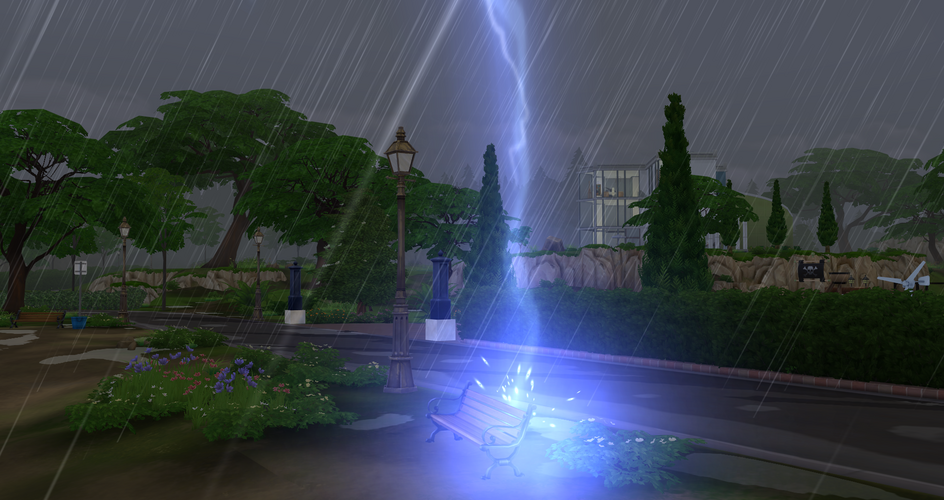 Looks like Zeus also took exception to this bench. I love how it looks when the lightning strikes. 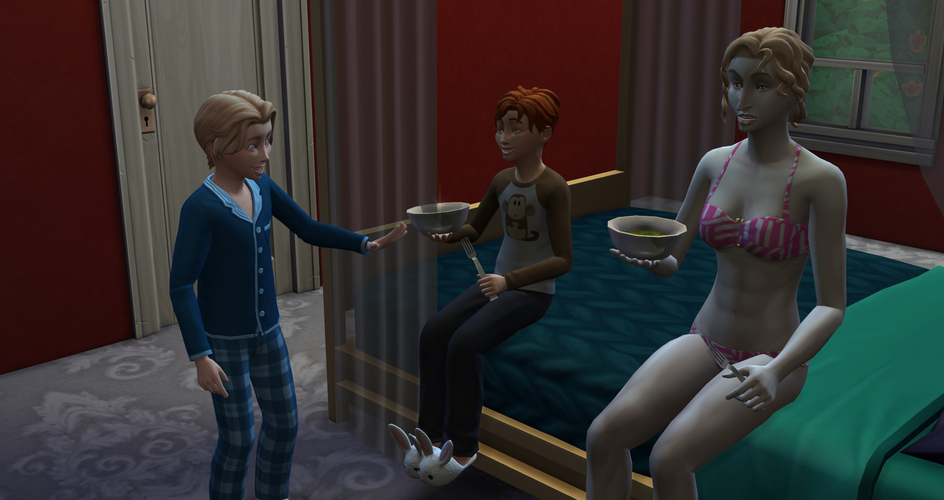 Atlas: Is that a six pack? You must have been working out real hard, huh, sis?

Circe: Yes. Every hour of every day. I want to die.

Don’t be such a drama queen, that is a gross exaggeration. You have to go to school too, remember?

Epimetheus: I know how you feel. The constant chess is starting to get to me. Everywhere I look I see black and white squares. 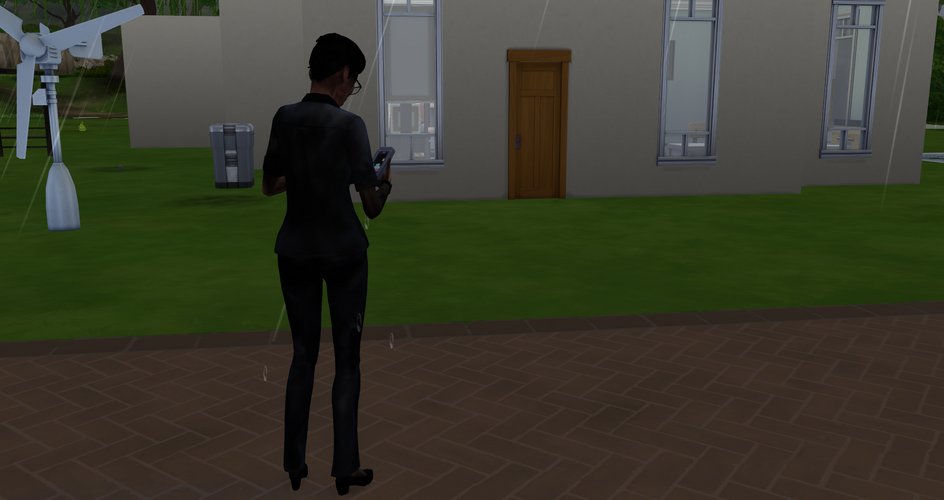 Another paparazzi was hit by lightning. I guess Zeus is still after Caly, then. 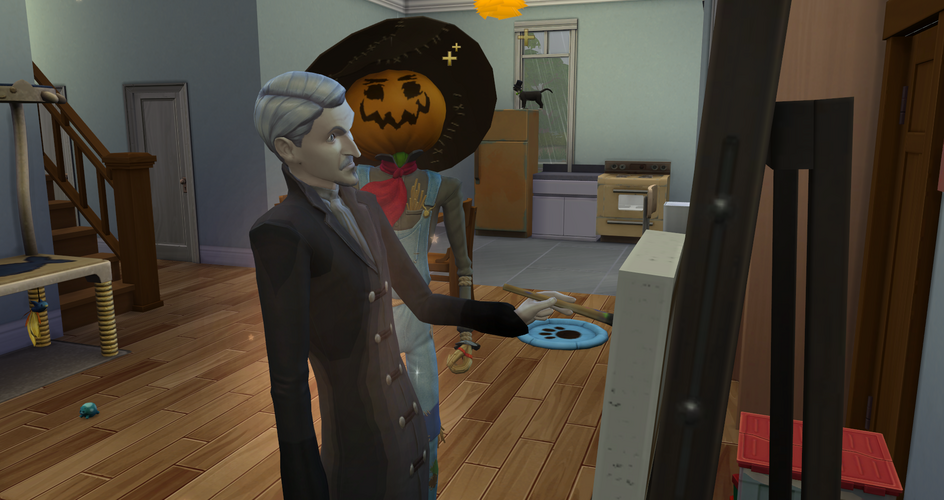 Patchy: I have an idea! What about you paint me?

Vlad: What about you go and look after the garden before you become firewood?

You don’t have a fireplace, Vlad.

Vlad: Gah! Well, I did in Straud Mansion. I hate this crappy little house.

In that case, I have some good news for you! Queenarella has built the most stunning house for you and when we’ve made just a little more money you’ll be able to afford to move into it.

Vlad: I don’t see why we can’t just move into Straud Mansion.

Because you can’t. And don’t be ungrateful, it’s a much nicer house than Straud Mansion. 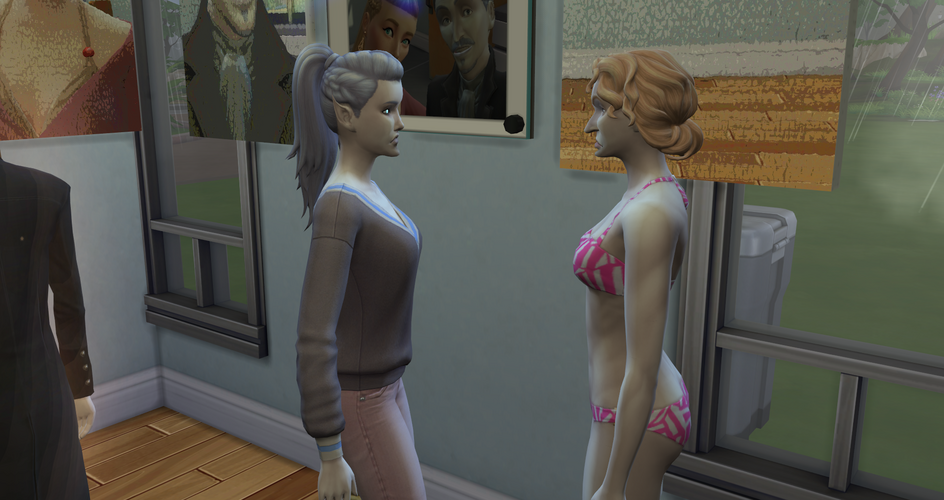 Scylla: Circe, when we were kids what happened to my Mr Bear?

Circe: Er why do you ask?

Scylla: Because I found his severed head at the bottom of your school bag.

Circe: Ok yeah I might have chopped off his head with scissors and flushed his body down the toilet but c’mon we were kids and he was just a stupid teddy bear. You can’t hold a grudge surely?

Scylla: So you admit it, you’re  murderer! It’s payback time. 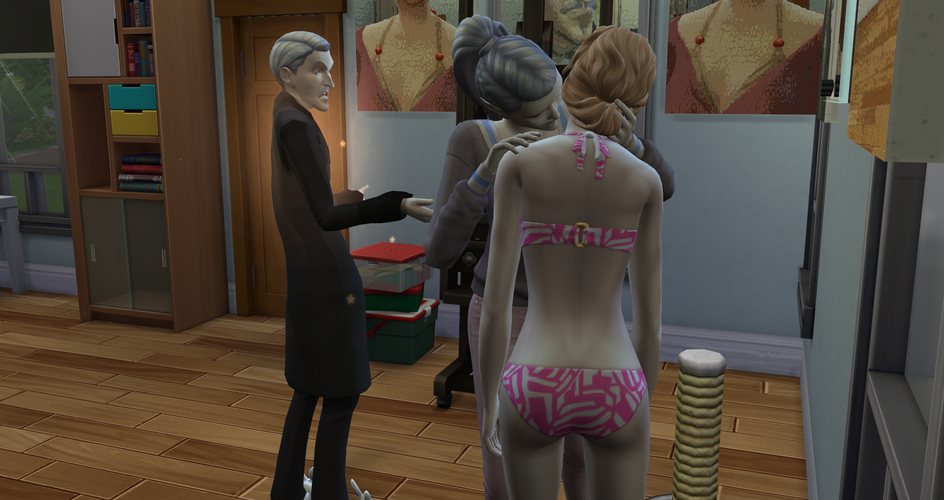 Vlad: Scylla Straud, you leave your sister alone before I ground your ass! We have perfectly good neighbours to drink from.

Scylla: I’m sorry Dad, but Mr Bear must be avenged.

Basically what happened here is that Scylla came home from school enraged and drank from Circe uncontrollably. 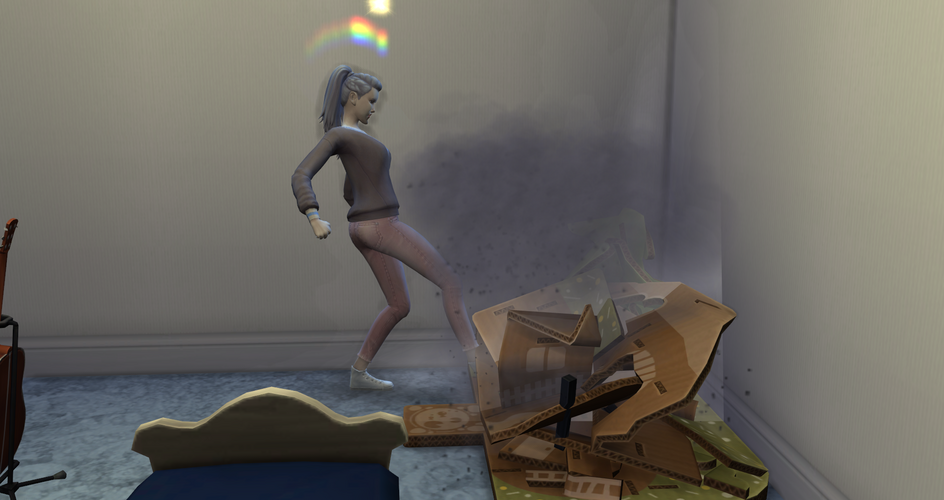 Scylla: Take that! This dollhouse was always Circe’s favorite toy. 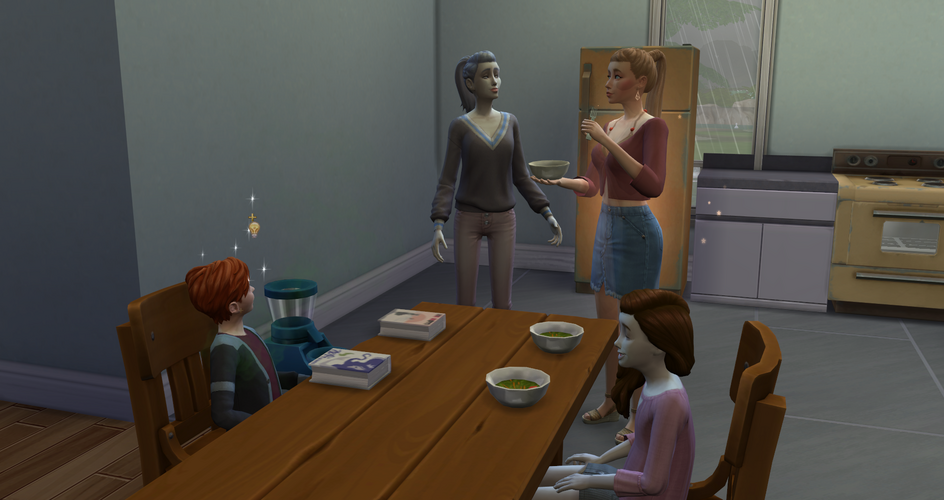 Epimetheus: Where did Circe get to, Scylla?

Scylla: Oh, she just decided to take a nap. On the floor.

Caly: What a weird place to sleep. You teenagers do the strangest things. 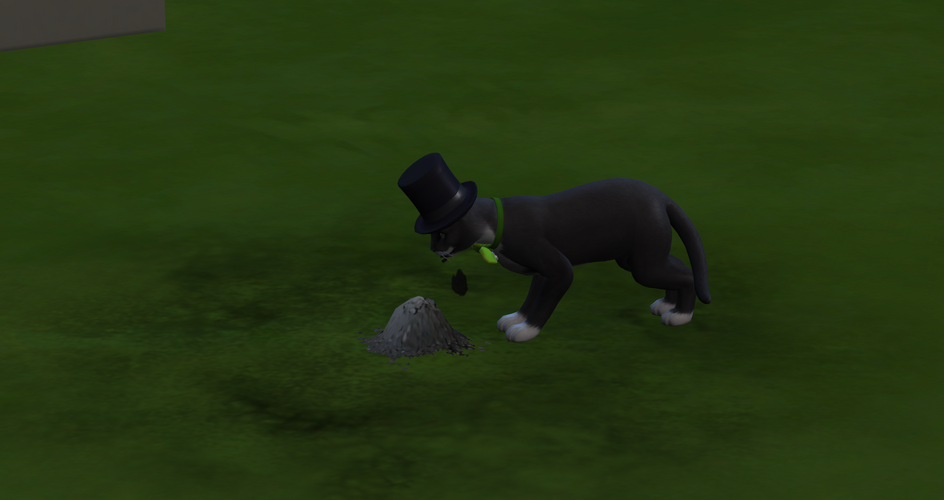 A lightning strike left behind a pile of ash and Mayor Whiskers decided to eat it.

Mayor: Hey, don’t knock it until you’ve tried it! 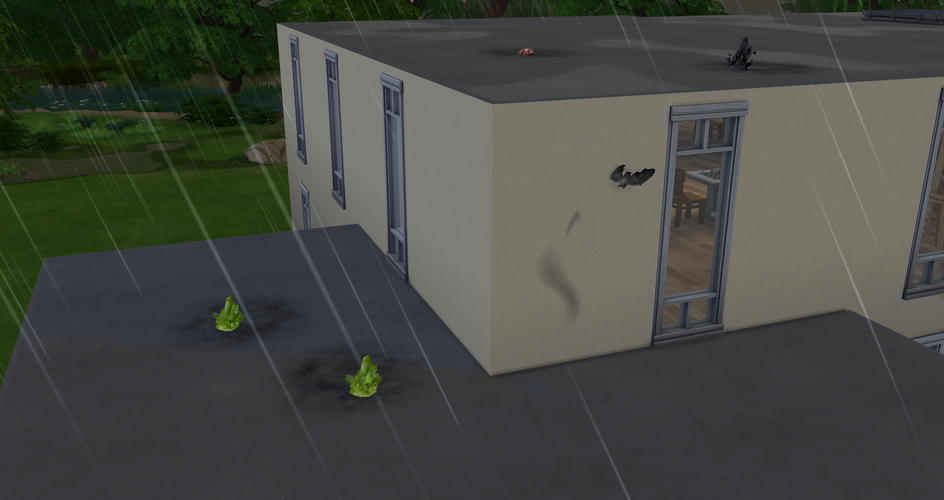 I noticed that some of the lightning strikes had left behind three crystals and one metal on the roof – probably because the house didn’t have a proper roof. The bat in this screenshot is Scylla, who flew up there to retrieve the collectibles. Vampires are handy for all sorts, right? 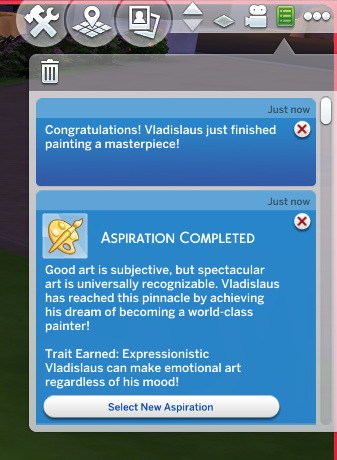 Vlad completed his painting aspiration! For his third aspiration, I’m giving him the world famous celebrity one. True, Caly has already completed that one but he’s already a five star celeb and it would seem like a waste not to get him to do it since he could be finished relatively quickly. 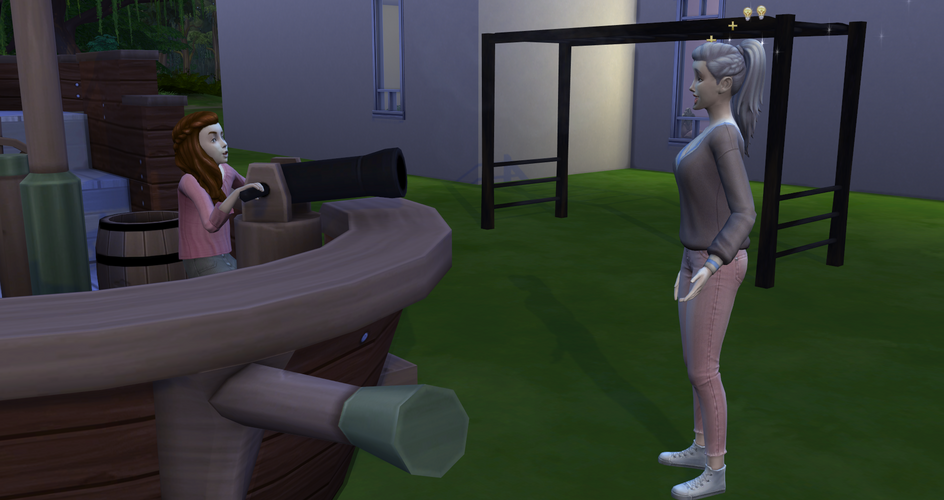 Scylla: Hey little sis, Mum says you have to come in for dinner.

Scylla: I know I’m named after a sea monster, but is that really necessary?