Last time, Scylla adjusted to life as a vampire, Galatea talked a scarecrow to life, Mayor Whiskers got sick and Vlad became a five star celeb. 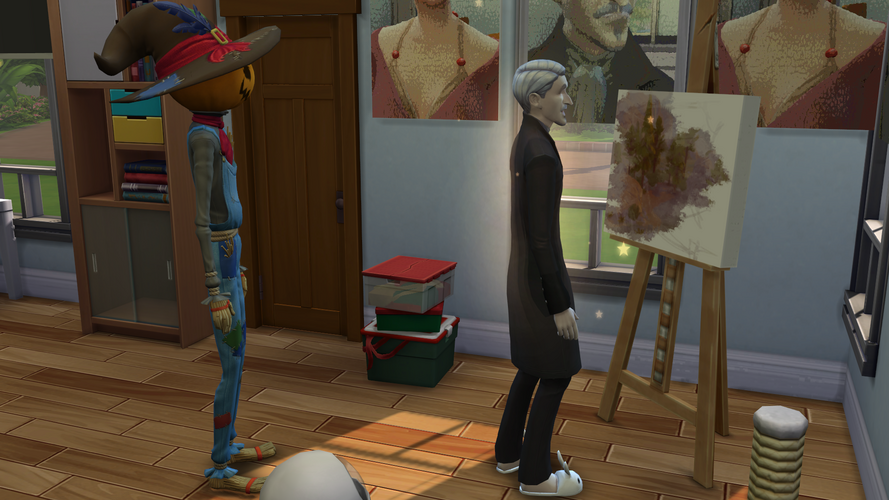 Vlad: Why do I get the feeling that I’m not alone?

Patchy: I could stand here watching my favorite celebrity all day.

Not creepy at all. 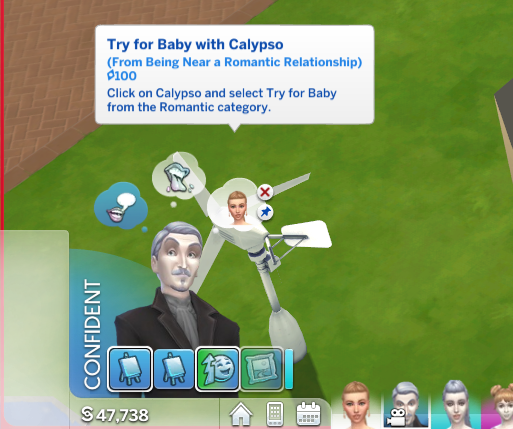 Vlad: You know, I’m starting to miss having a baby in the house…

Who are you and what have you done with Vladislaus Straud?!

There isn’t any room in the household for a baby and even if there was I wouldn’t allow it. 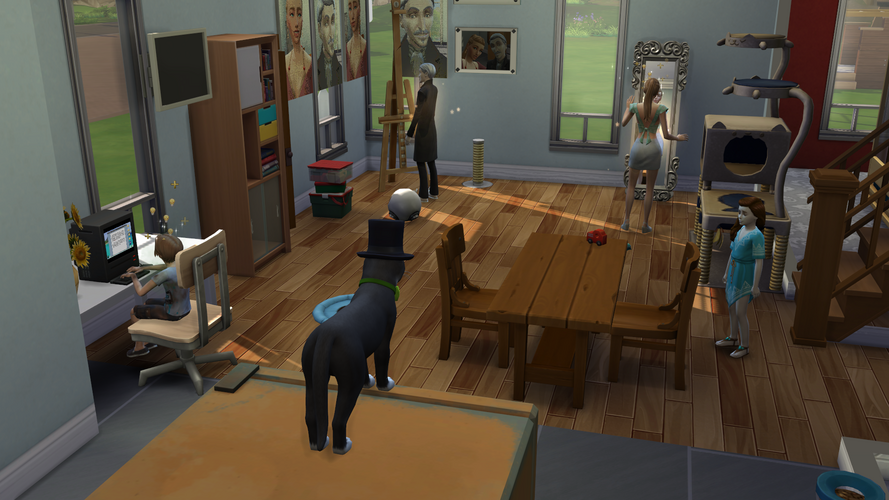 Mayor Whiskers: From this handy vantage point I can keep a watchful eye on all my subjects. 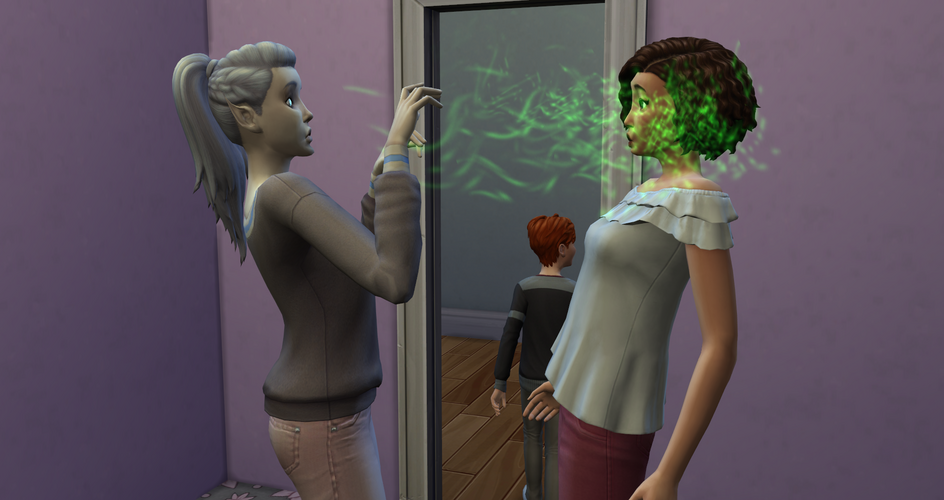 Morgan made the poor choice to visit.

Scylla: Hi Morgan, you don’t mind if I drink some of your plasma, do you? 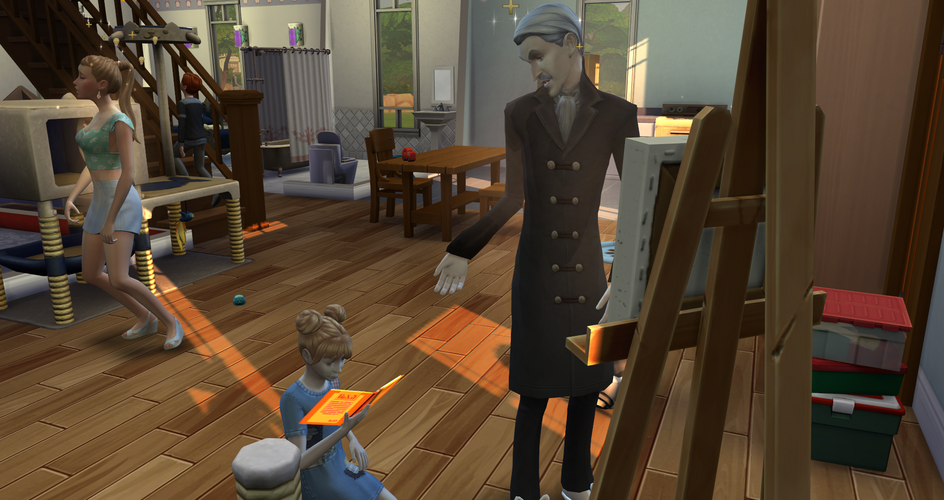 Vlad: So, are you excited about your birthday?

Circe: No, I’ll probably only get uglier and then the evil voice will laugh at me even more.

Vlad: But you’re not ugly at all, you take after me!

Vlad, that sentence was a contradiction. 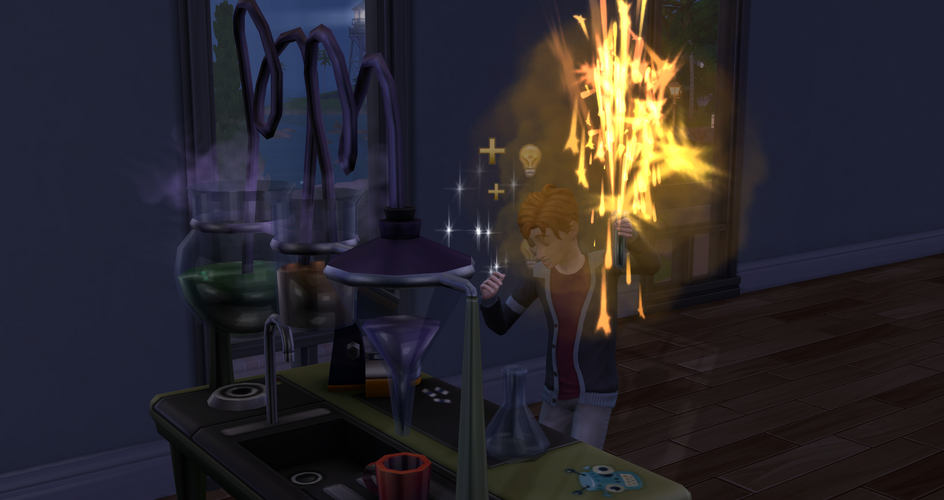 Epimetheus experimented on the chemistry lab.

Please don’t burn down the house. 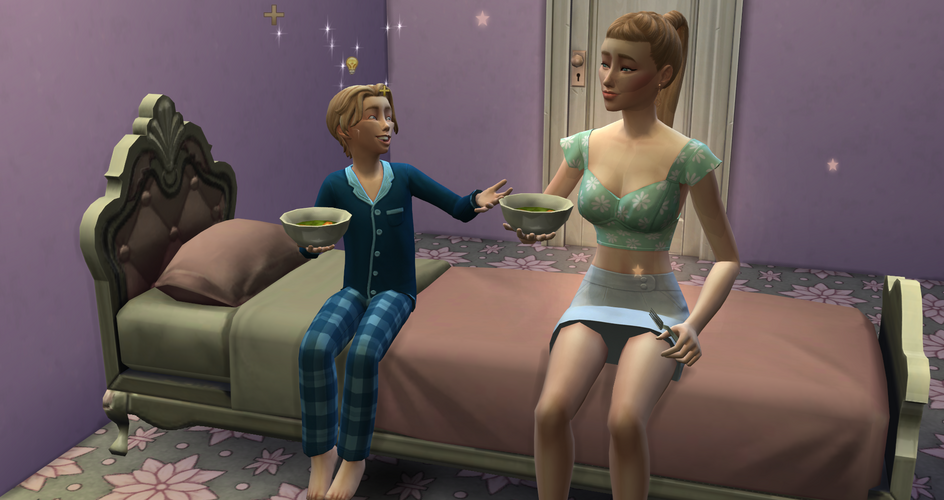 Atlas: At school today, we had to draw our family trees and everyone was super impressed to hear that my grandpa is a god and I’m named after him. Teacher said my tree was the most incredible hokum she’d ever seen! I think that means I’m getting an A.

Caly: How lovely, dear. You should show grandad your family tree when he next visits, I know he will be pleased. 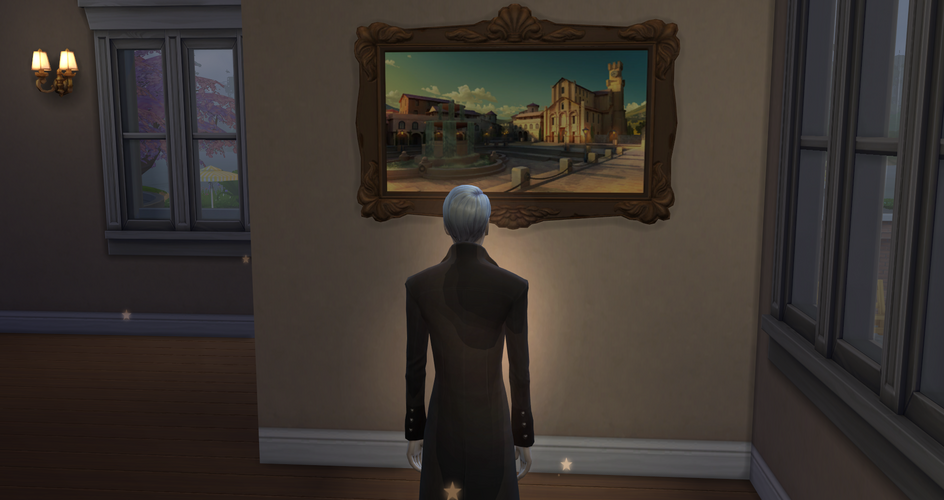 Vlad had to view paintings in a museum or gallery for his aspiration.

This picture is so pretty.

Vlad: Pretty? Huh! My paintings are  a hundred times better. But I suppose this pathetic little museum couldn’t afford one.

Yes, that’s totally why there are none of your paintings on display. 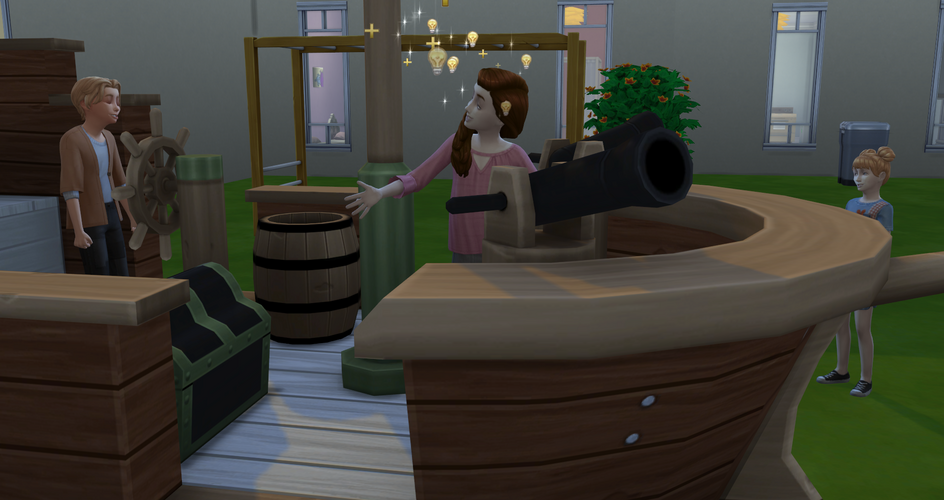 Atlas: No, I’m the captain! 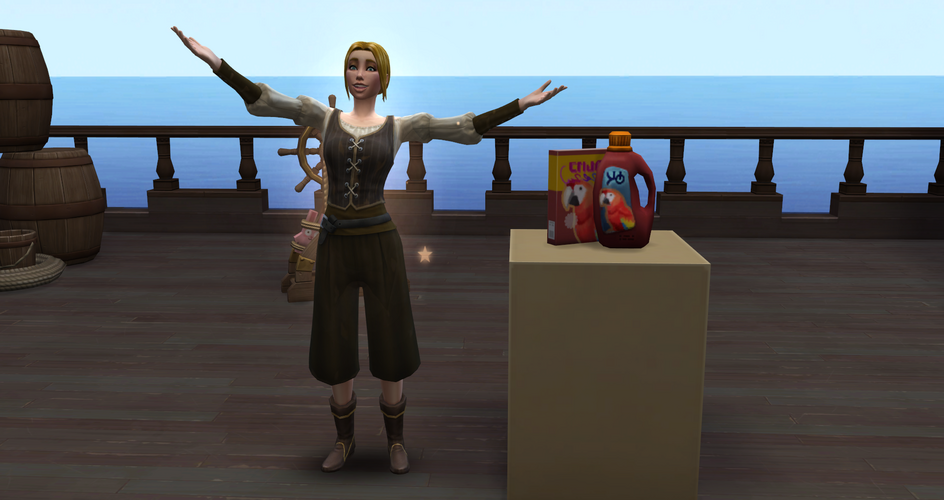 Caly needed to get gold in a commercial acting gig for her aspiration so she had to do the Salty Suds commercial again.

Caly: … So, if you want to keep your house Ship Shape use Salty Suds! *under her breath* I’m a world famous actress now, I can’t believe you’re making me do a day time TV advert for second rate cleaning products. 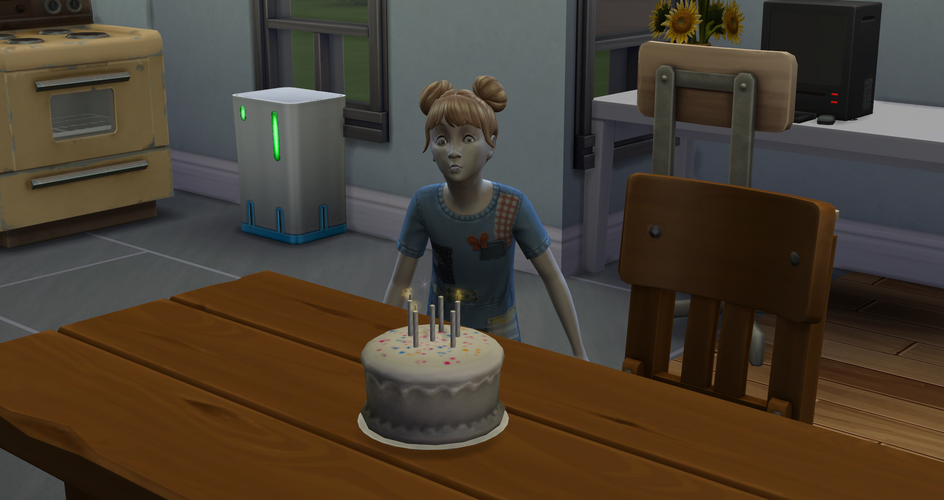 Circe’s birthday arrived and she became a teen. She got the neat trait and the bodybuilder aspiration.

I think I will actually try to complete that aspiration since it isn’t too hard. Circe conveniently has the ‘physically gifted’ reward trait from completing the rambunctious scamp aspiration as a child which will help matters. And since she’s a mermaid, she will spend a fair amount of time swimming to get her hydration need up which has the added benefit of building the fitness skill.

Now for some CAS shots of the birthday girl: 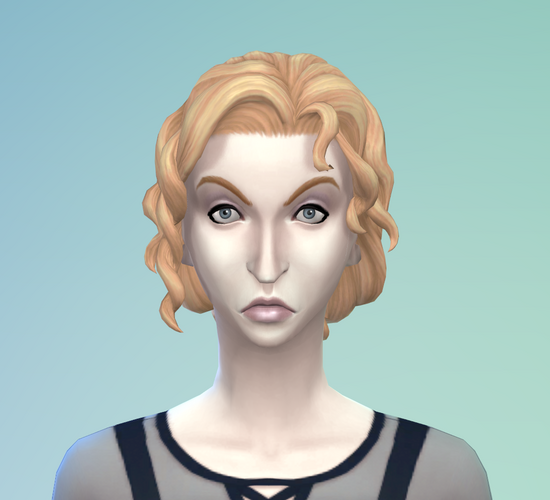 I love this hair but let’s be honest, nothing in the world could make that face pretty. 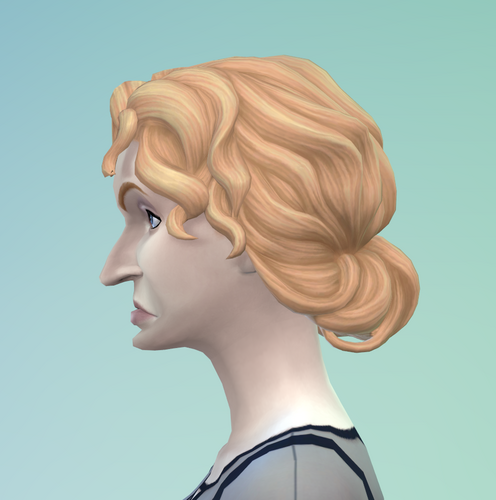 Yup, definitely a female Vlad clone. At least she didn’t get his grey hair though. 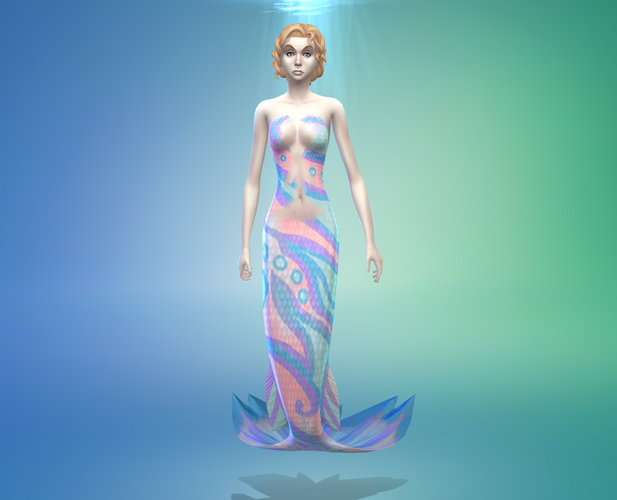 And this is her mermaid form. 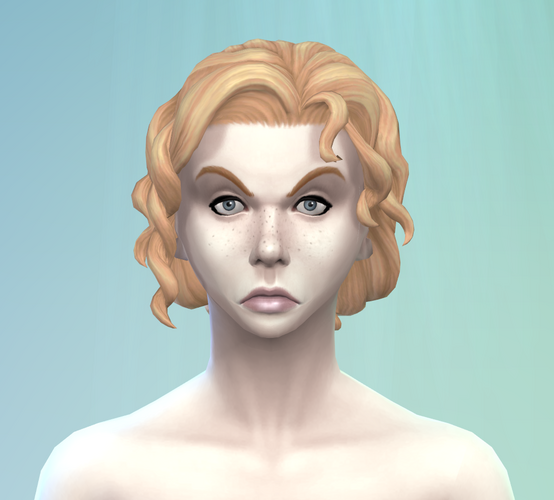 Here’s a close up of Circe’s face in her mermaid form. I forgot to take it when she aged up and only remembered when Galatea aged up, by which time Circe had already gained a lot of muscle from her aspiration (hence the thicker neck/broader shoulders). As you can see, she escaped Vlad’s nose in her mer form! But, a sim’s features in that form don’t get passed on to their offspring unfortunately. 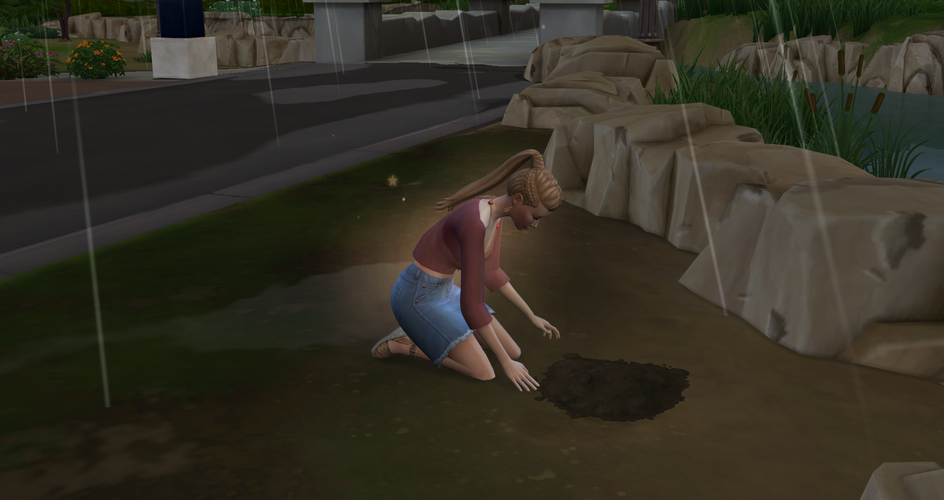 I said in an earlier chapter that the dig piles in my game were not respawning. Turns out that they were respawning, but they had all turned into these piles of earth which I assumed were areas where plants were going to grow, rather than dig piles. But at last I realized my error.

Caly: I can’t believe you’re making me stay out in the pouring rain like this.

Caly: For the last time, I’m a nymph! 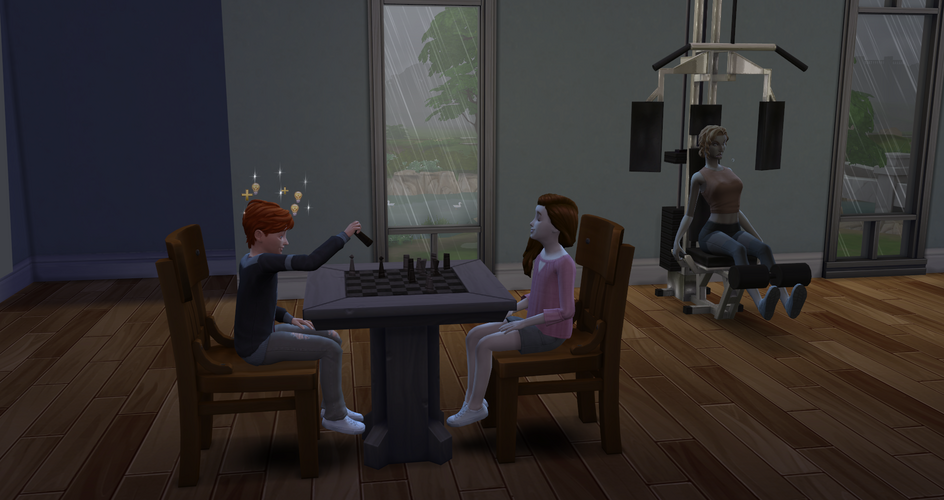 Epimetheus worked on his aspiration, assisted by Galatea, while Circe exercised for her aspiration.

Circe: Hey Galatea, why don’t you help me instead? I could use some encouragement.

Galatea: Ew no you’re all sweaty and icky.

Circe: It’s so unfair. I have the worst aspiration in the world and not even my own sister cares about my sufferings.

Circe: For you maybe. You don’t have to do all this working out. With my luck, I’ll probably break my back or something. Then you’ll be sorry. 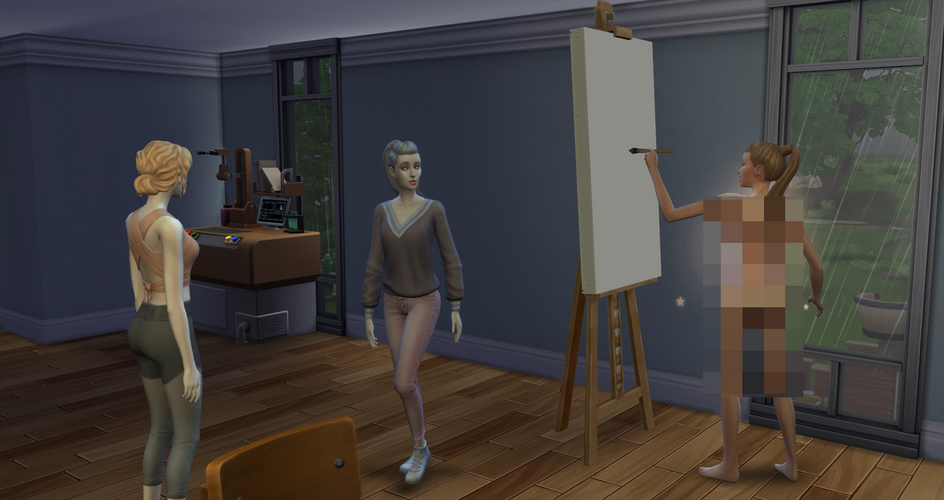 Circe: Mum, what are you doing?

Scylla: But why are you naked?

Caly: Clothes inhibit the mind. I need full creative freedom while I paint. 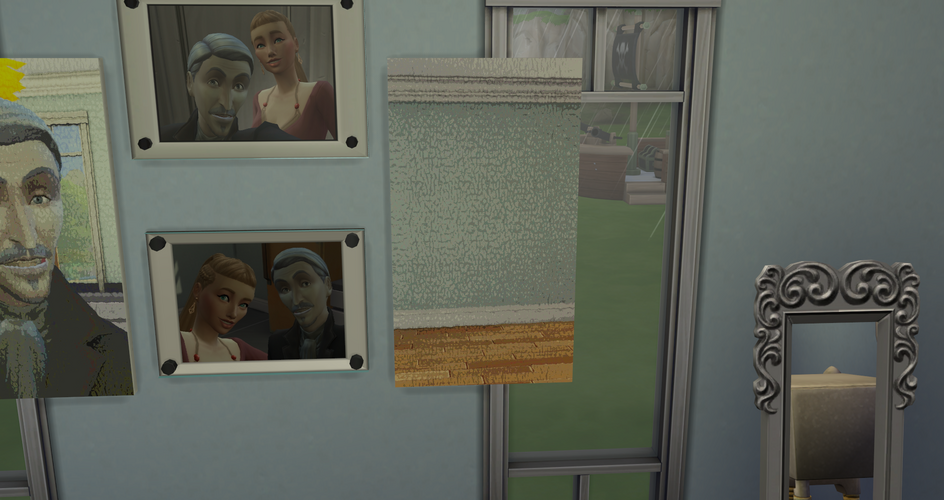 Here is the finished portrait of ‘Atlas’ (senior). 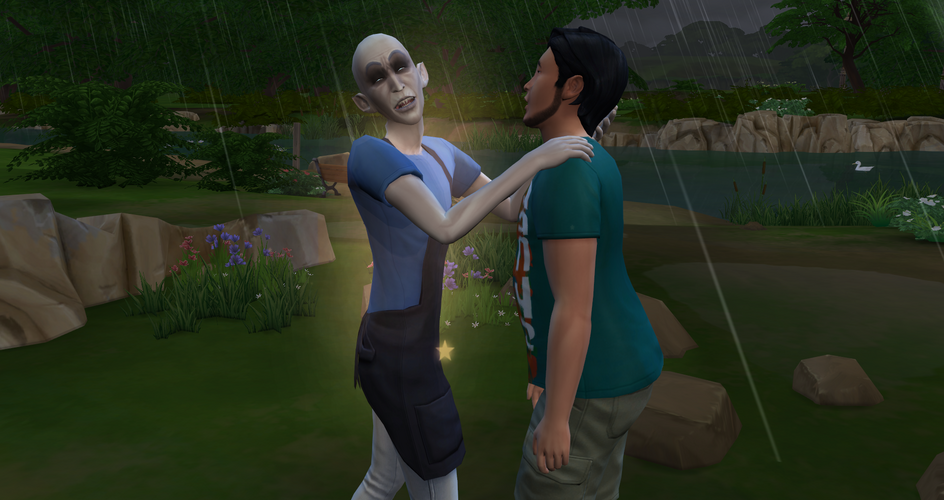 Vlad found another victim. You don’t look so scary in those overalls, Vlad.

Vlad: That’s the idea, makes the humans easier to catch. They think I’m just an ordinary harmless sim like them until my fangs are in their neck and then it’s too late to run.

No one could mistake you for an ordinary sim, not with a face like that.

Those overalls are his work outfit, by the way. 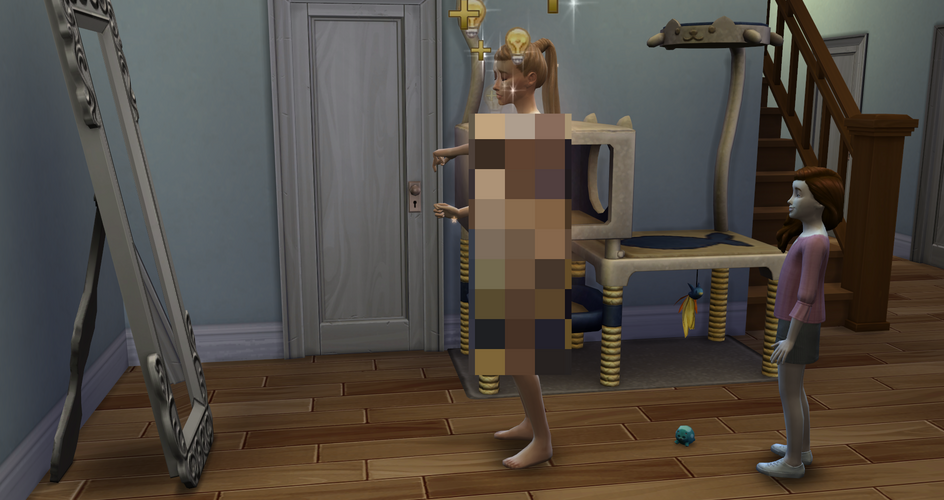 Caly: What is it, sweetie? Mummy’s just working on her charisma.

Galatea: Never mind. I just remembered I have to go puke somewhere. 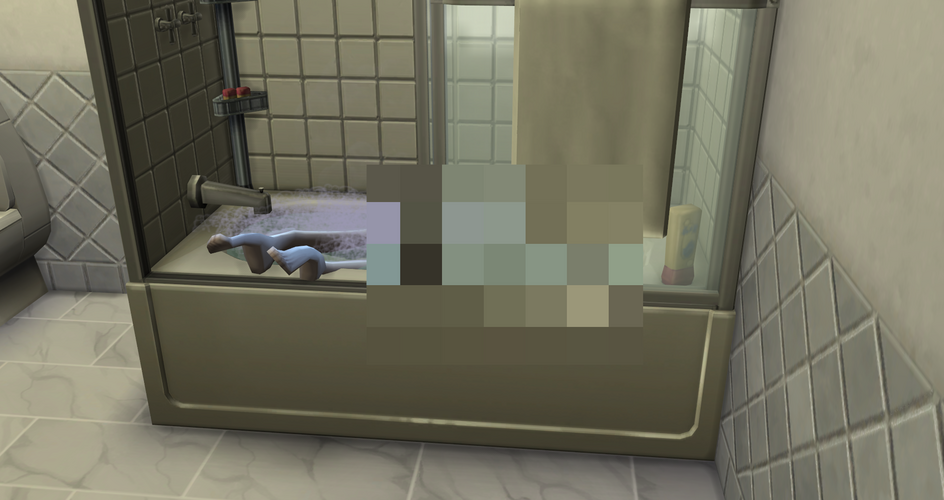 Scylla took a bath and I noticed that her legs are messed up when she is in water. That seems to be a relic of her past mermaid lifestate. 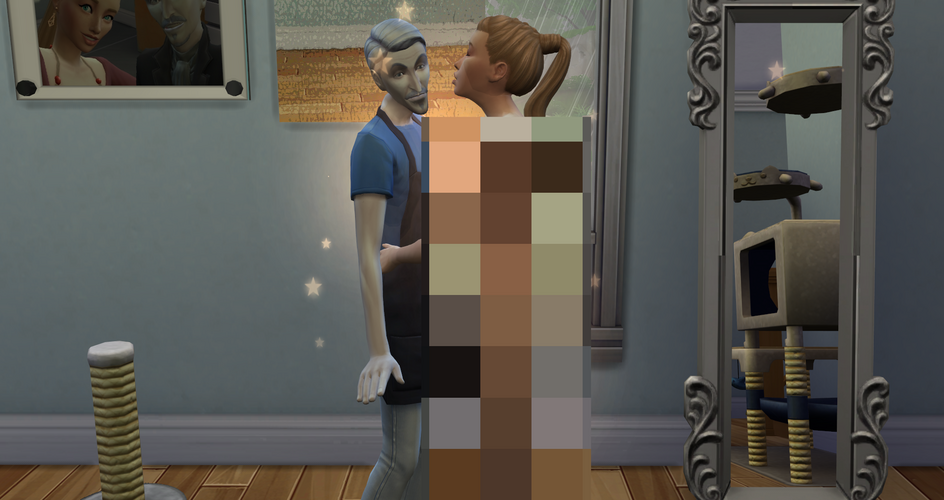 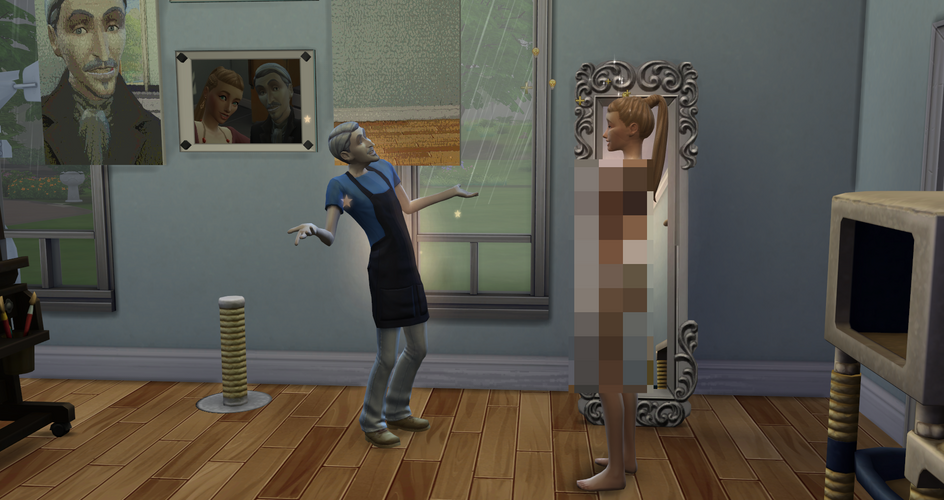 Caly: So, what do you think about my painting of Dad? 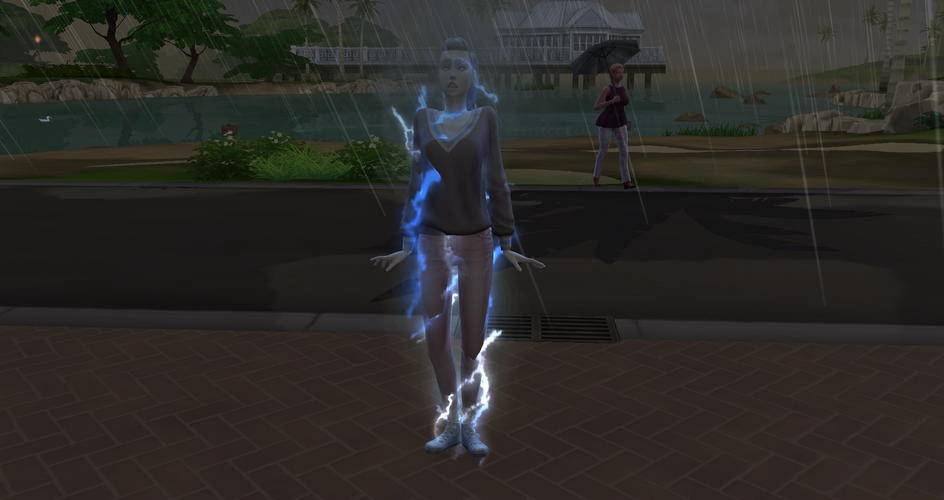 I sent Scylla out to hunt and she was hit by lightning.

Scylla: Maybe you should just buy me a plasma pack. That’d be much safer.

It would be safer… But it’d also cost me money so nope, no can do. 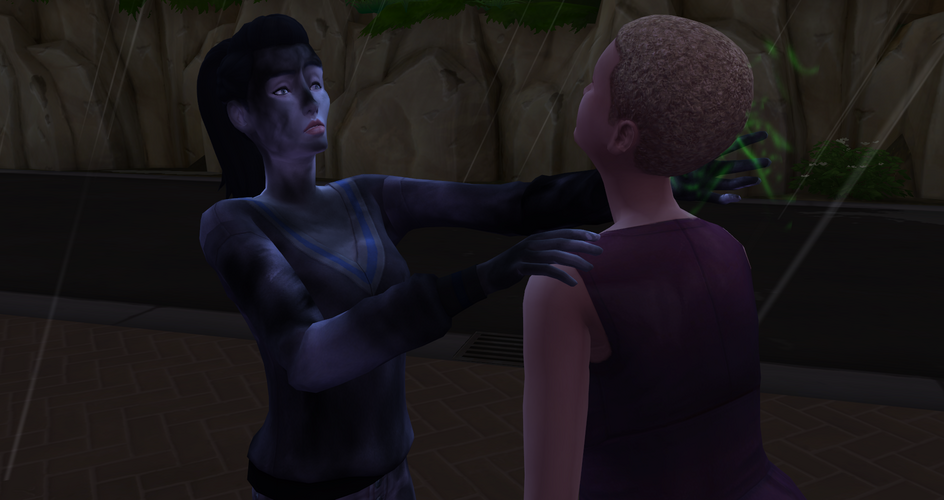 Scylla: This plasma had better be worth being half fried to death. 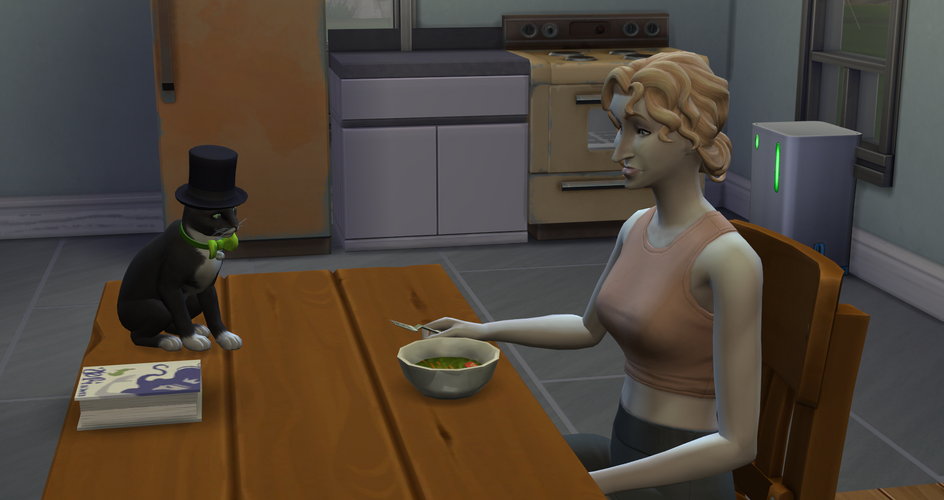 Circe: The evil voice is the worst, huh? She’s been making me work out non stop and now my muscles hurt so bad I can barely move.

Mayor: Poor pathetic little sim. The evil voice can’t control me, my mind is too strong. We cats really are the superior species. 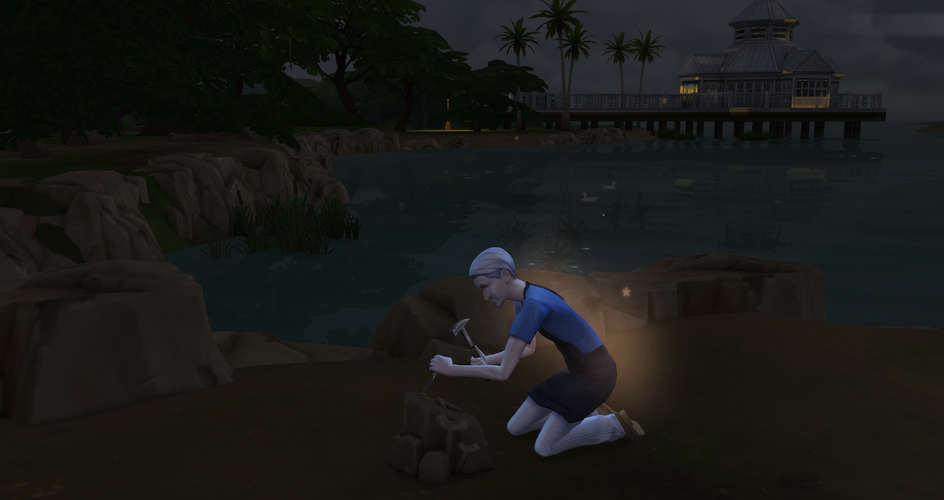 The day after I dug up all the earth dig piles, we had rock dig piles again. Proof that I was just being dumb when I though they weren’t respawning.

Since Vlad has the vampiric speed power he can get to all the dig piles extra quick. That means I’ll be making him look for collectibles every night from now on.

Vlad: Oh wonderful. That was sarcasm, by the way, in case you couldn’t tell. 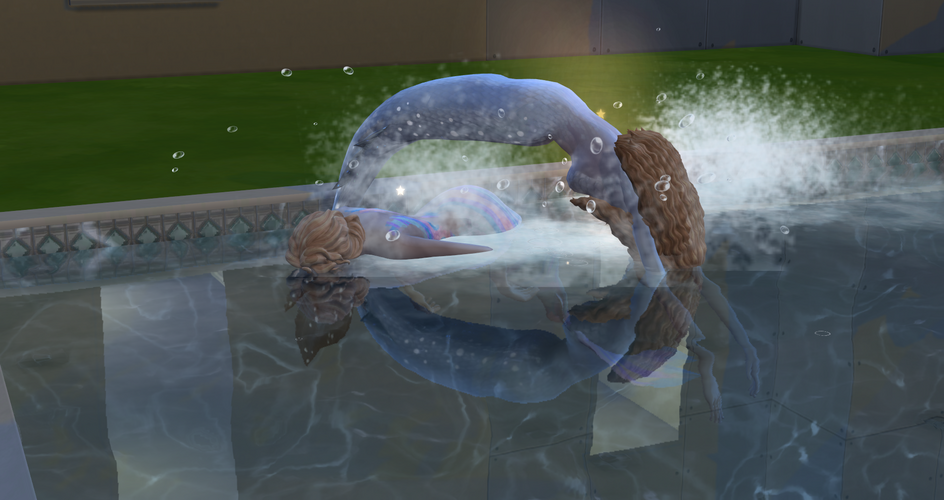 Caly jumped over Circe in her mermaid form. I thought it looked pretty cool. 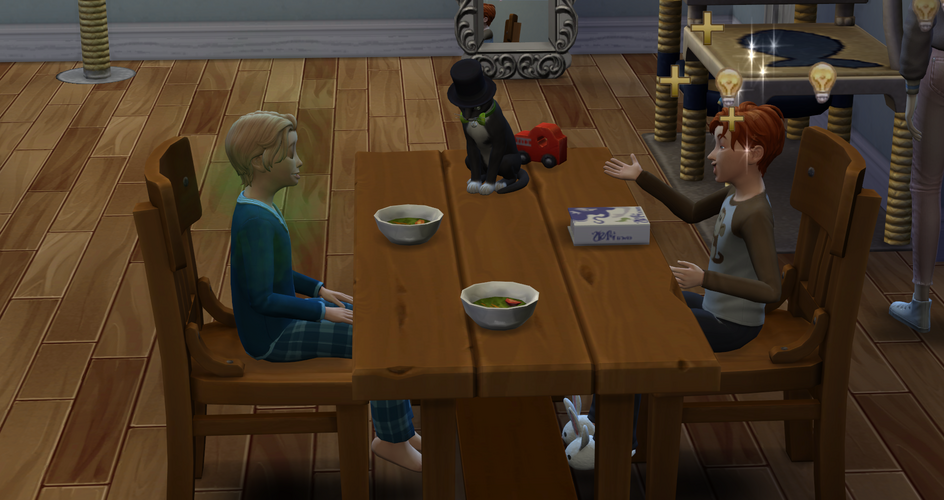 Mayor: It’s true, you are smelling particularly pungent today. It offends my sensitive sense of smell.

Atlas: Yeah? Well no wonder you can smell me with a massive great conk like that, Epi!

Shadami came up with the nickname Epi for Epimetheus and I love it, it’s so cute 🙂

Is conk a word in other countries? It means nose in (British) English.

And let’s end the chapter on that heart warming scene of sibling love. Until next time, folks!