In the previous blog post, Caly completed the world famous celebrity aspiration and began the master actress one, Vlad got a whim to woohoo in a bush with Caly (and I made it happen), Circe started the ‘I’m a bear’ phase, Scylla became a teen and Epimetheus and Atlas worked away at their respective aspirations. 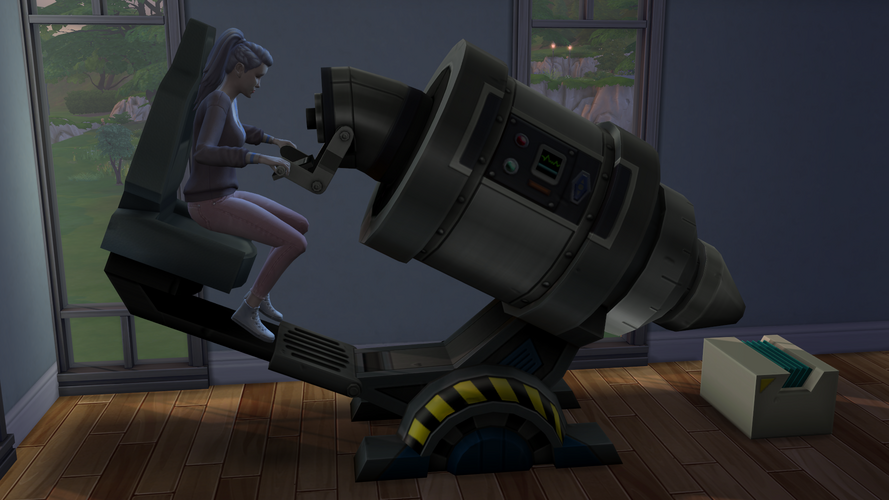 Scylla: But I want to spend my teenagehood having fun at parties, not staring at boring old blobs down a microscope.

Yeah well I’m not doing that party animal aspiration unless and until I absolutely have to i.e. I will only do it if you win the heir poll. 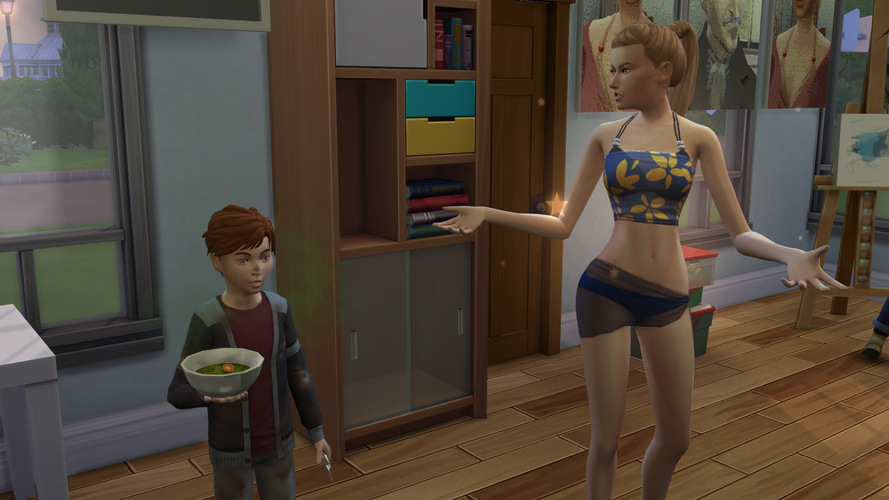 Caly: Young man, you stink! Who taught you those atrocious hygiene standards?

Epimetheus: You did. Atlas and I were hardly ever bathed as toddlers, remember? 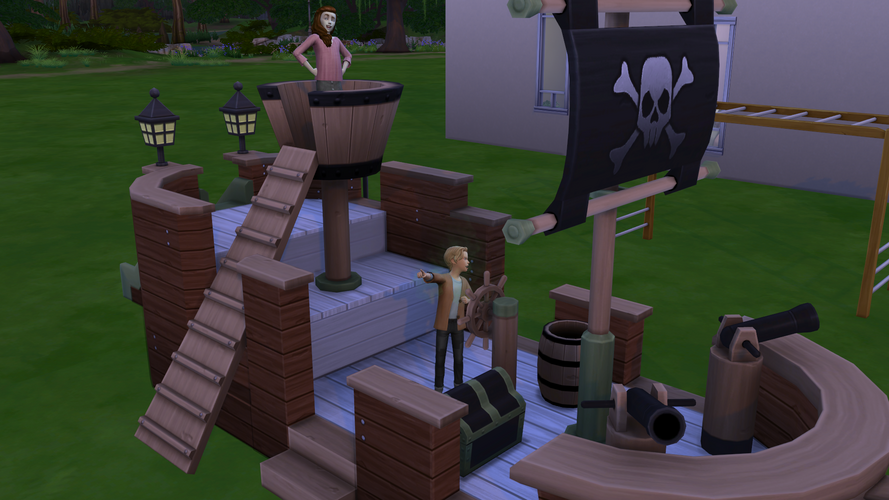 Atlas: Ahoy there first mate Galatea, what do you see?

Galatea: Merchant ship up ahead! Prepare to board, Captain. 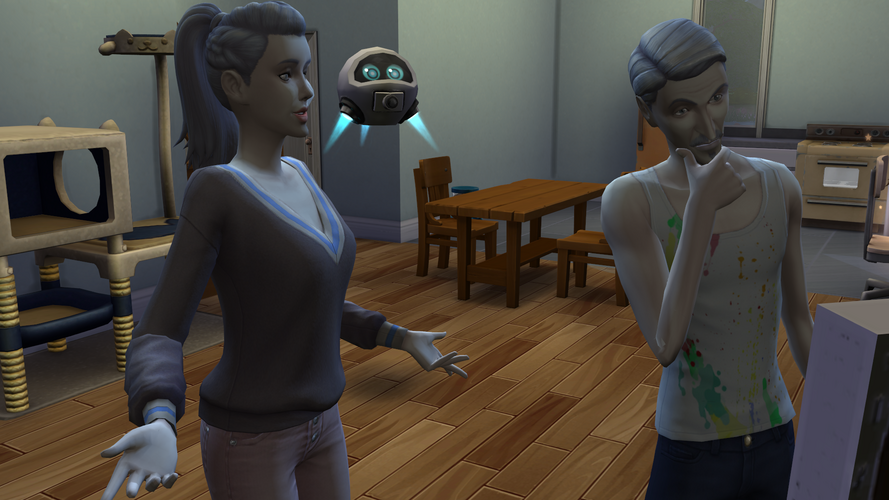 Scylla: Dad, there’s this weird burning feeling in my throat and no matter how much water I drink it won’t go away. What’s wrong with me?

Vlad: You’re just thirsty. Now that you’re a vampire, you’ll have to drink plasma regularly. I’ll take you on your first hunting trip tonight and show you how it’s done.

Vlad: Of course not, no child of mine will poison their body with that artificial filth! 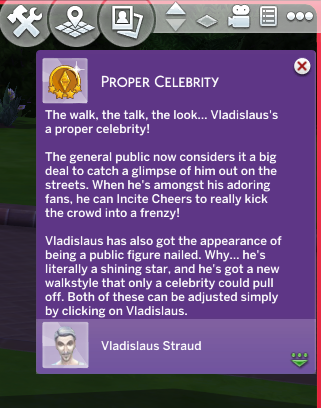 Vlad got his fourth celebrity star! 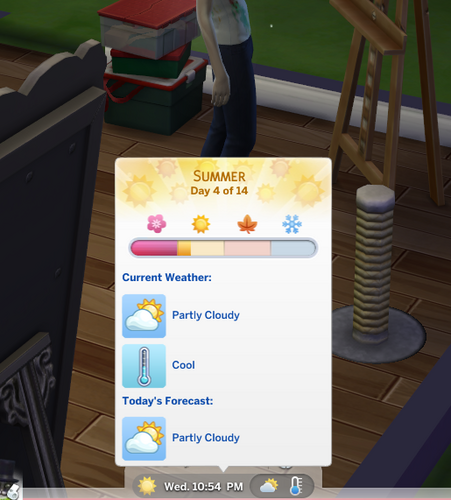 It was day 4 out of 14 of summer. You know what that means? Vlad’s 20 additional days as a vampire were over! And so Vlad completed his first aspiration (the master vampire one). For his next aspiration I gave him the painting one (I forget its exact name). 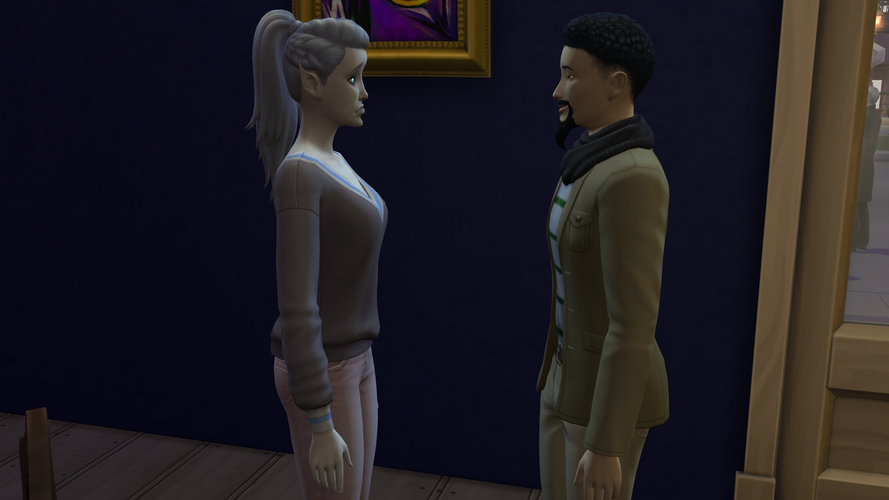 Scylla: I’m so sorry, my Dad is making me do this.

Random Dude: Um do what? 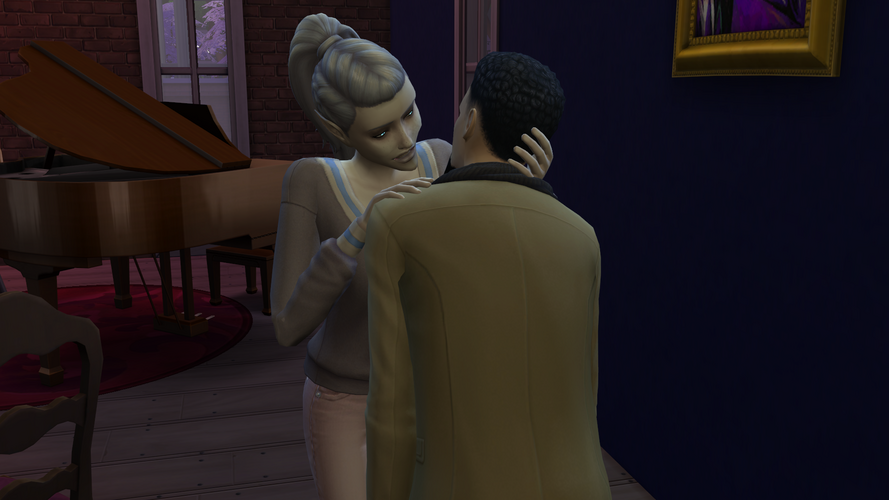 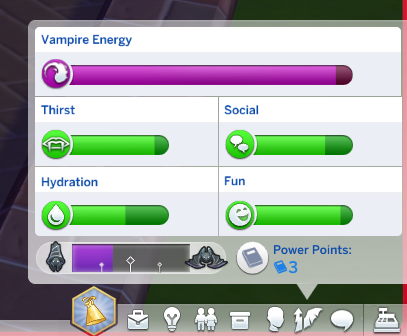 I noticed that although I completely removed Scylla’s mermaid life state she still has a hydration need instead of a hygiene one. She doesn’t have a tail or any mermaid powers anymore though. Odd. 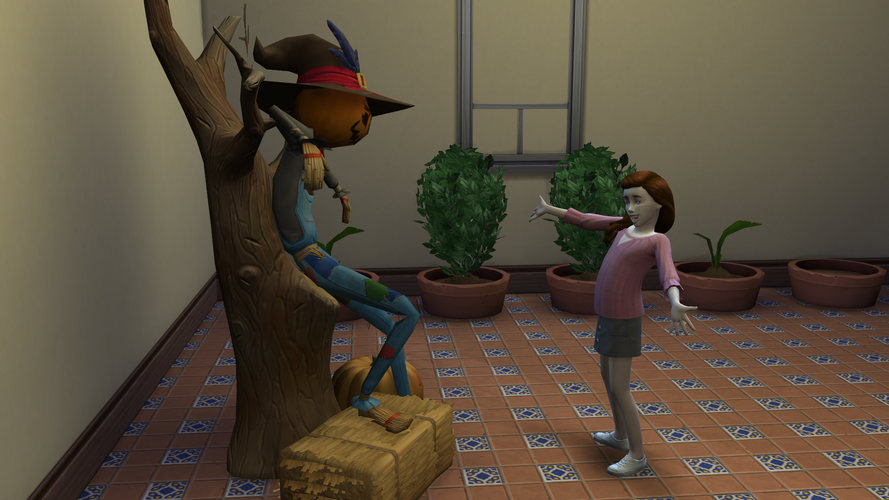 I got a Patchy for the house because I figured he could make himself useful with the plants. Galatea woke up in the middle of the night and I made her talk to him so that he would be able to come to life.

Galatea: Hello Mr Scarecrow! Will you be my friend? 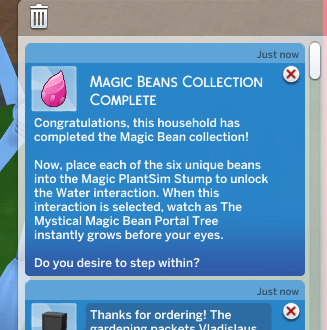 I believe that if you plant all six seeds in the magic stump thingy from build/buy you can grow a tree which your sims can go into and bring out a certain fruit which turns them into a plant sim if eaten. I prefer to keep the beans though. 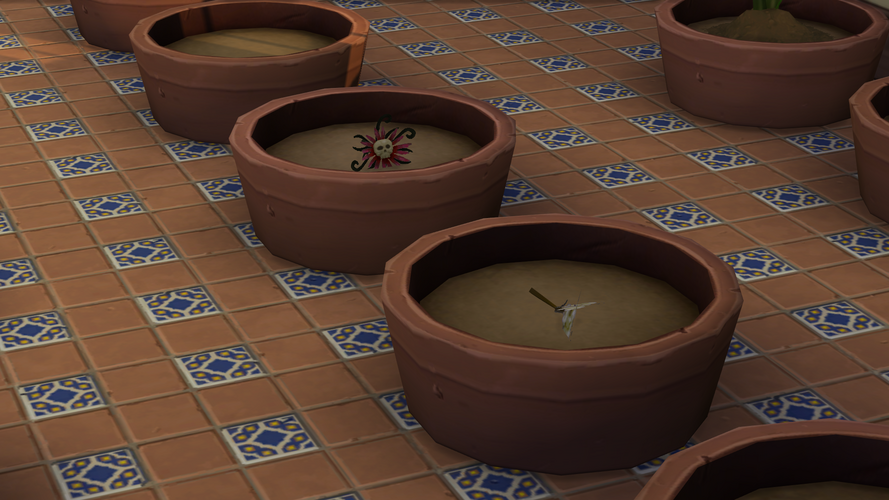 As a result of buying all those rare seed packets, we also got a death flower and an orchid. I think that orchids might even sell for more than dragon fruit but I’m not sure on that. We also got a few cow plant berries but I don’t want the effort of caring for a cow plant right now. 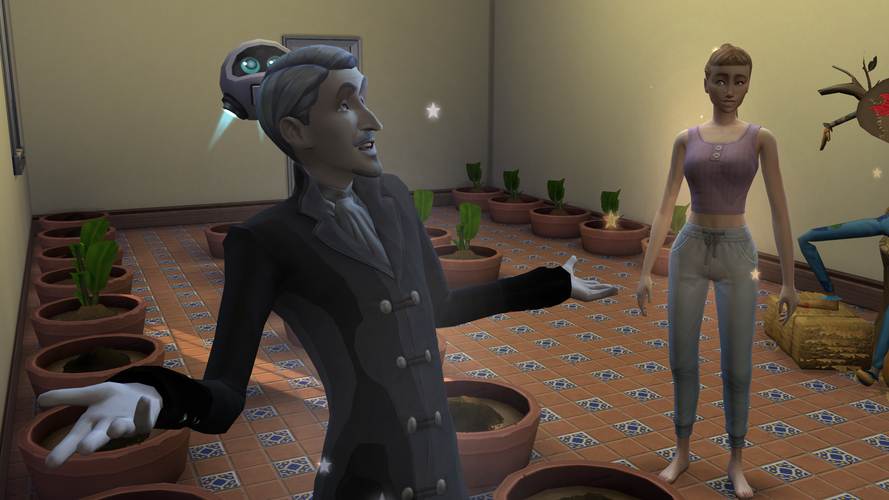 Vlad: Well, the evil voice says that selling dragon fruit can make us a lot of money and I’ve got to make sure my family has some way to provide for themselves in case something happens to me.

Caly: Oh Vlad that’s so sweet of you. But you’re immortal, surely there’s no reason to worry.

Vlad: You never know, Caly. The sun is a dangerous thing. 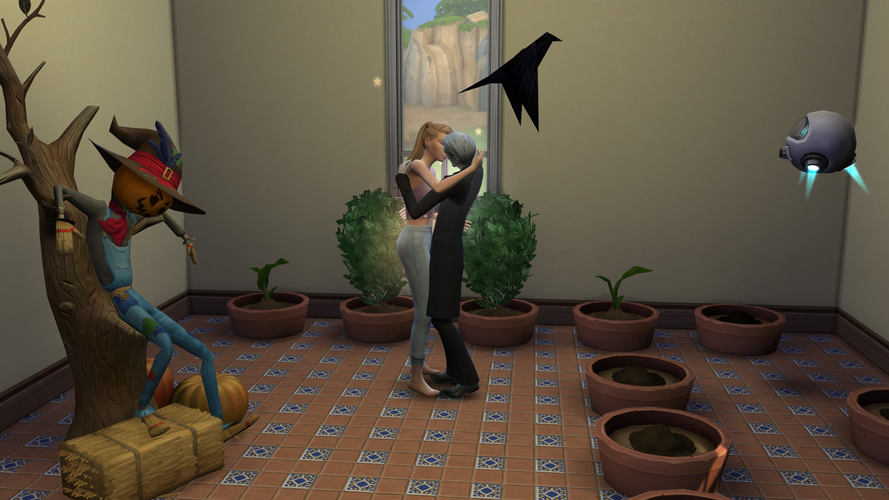 Vlad and Caly kissed, creeped on by Patchy, a drone and a random bird. 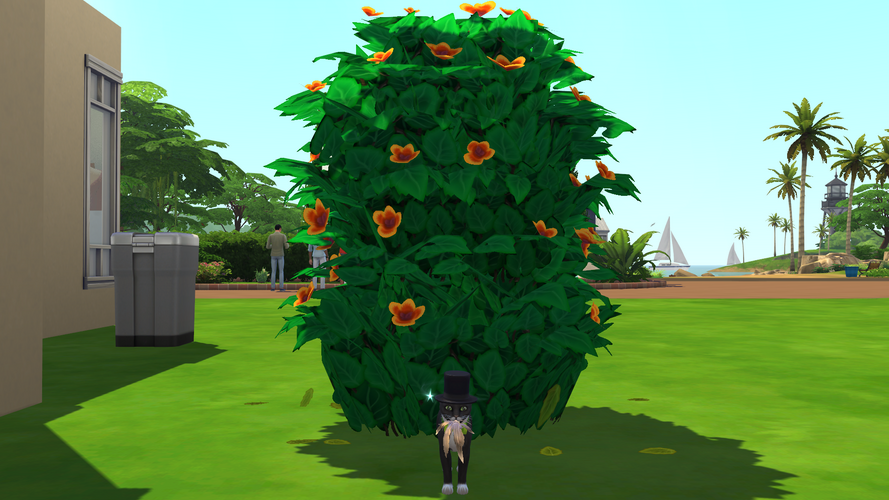 I managed to get a screenshot of Mayor Whiskers emerging from the bush with a mouthful of feathers.

Mayor: Now that I have your attention: I’m sick, take me to the vet. Look, you can pay for the appointment with these feathers. 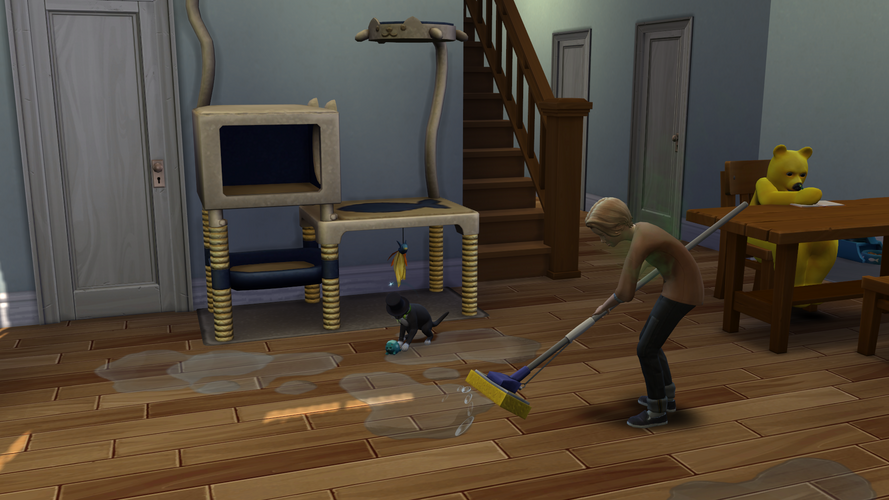 Puddles kept appearing all over the house and I couldn’t for the life of me work out where they were coming from. Then I realised that Mayor Whiskers was drooling everywhere due to his sickness.

Mayor: I will keep making a mess of the house until you cure me. I’ll flood the entire house if I have to. 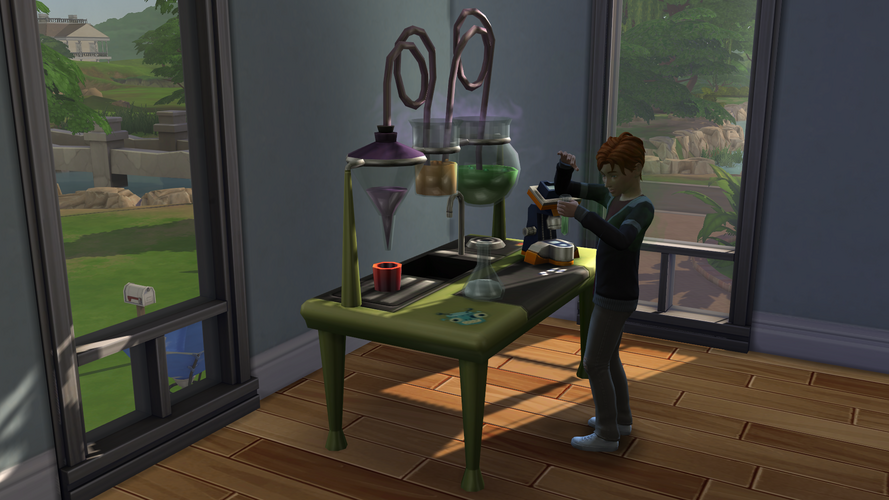 I got Epimetheus the chemistry lab thingy to help him build the mental skill.

Epimetheus: If I throw all the chemicals into a tube together I’m bound to make something interesting right?

Yes, if noxious gas or an explosion is your idea of ‘interesting’ 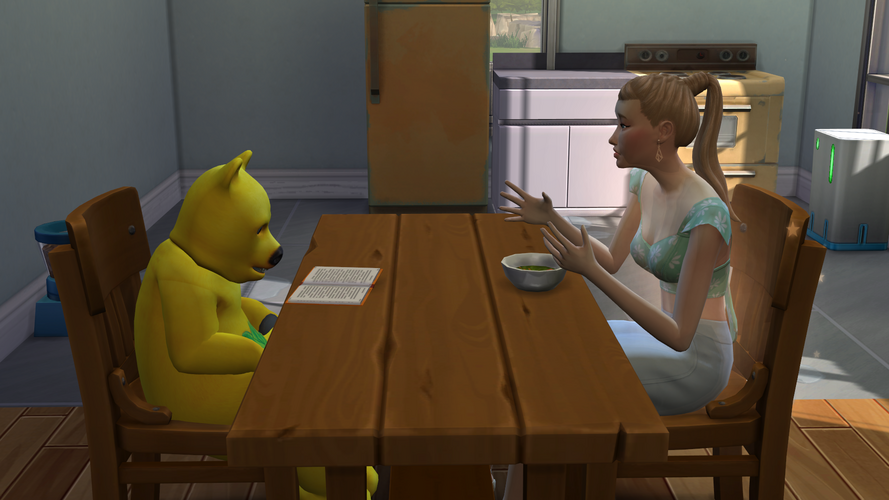 Caly: Circe, what’s this bear thing all about? I’m worried.

Caly: Don’t be delusional, you’re a nymph. Dad, tell her she isn’t a bear! See, your grandad agrees with me. 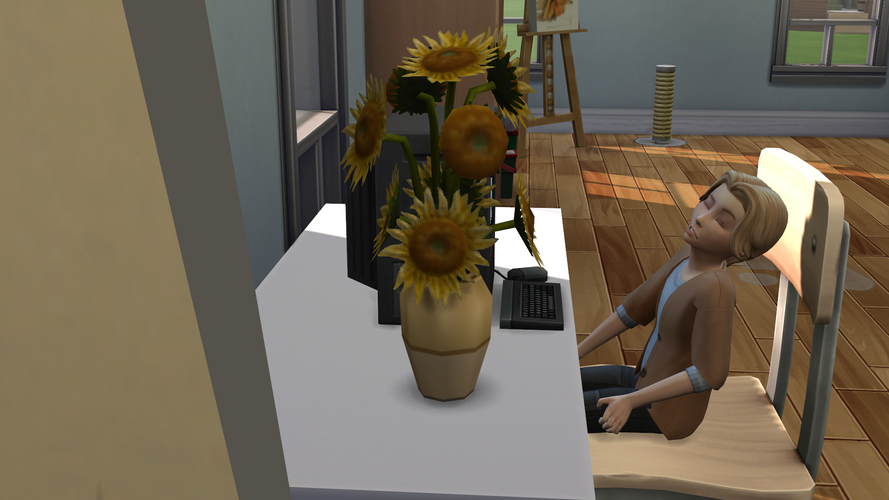 Atlas: Please can I stop typing now? I think I’m getting RSI.

Are you at level 10 motor skill yet?

Then you just answered your own question. 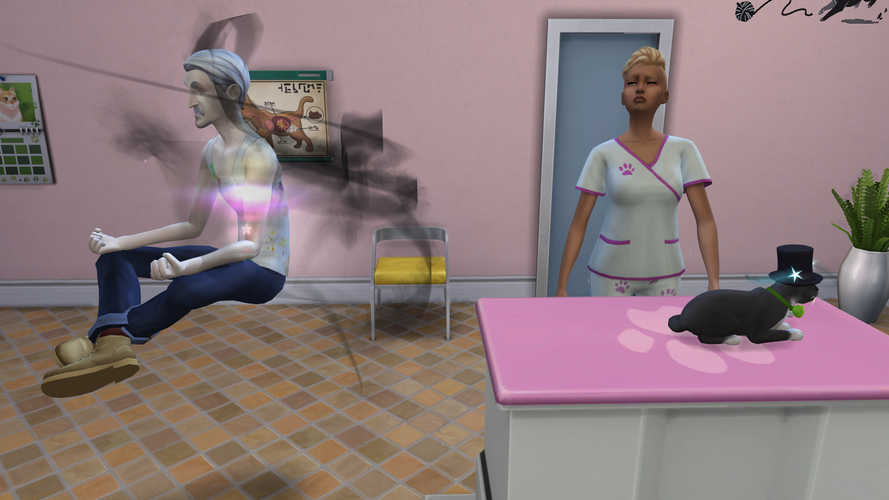 Vlad took Mayor to the vets.

Vet: What the hell is he doing? Why do I get all the weirdos? 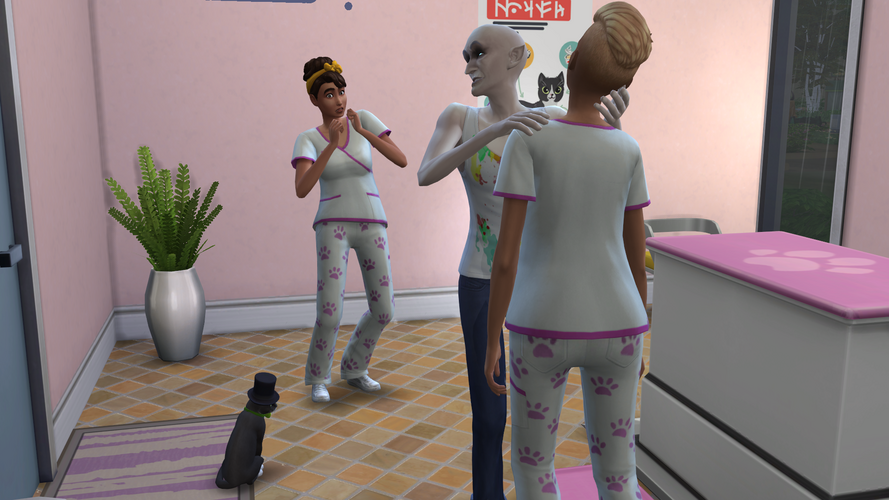 While there, Vlad took the opportunity to slake his thirst.

Vlad: She overcharged for the appointment. I’m just getting my money’s worth out of her. 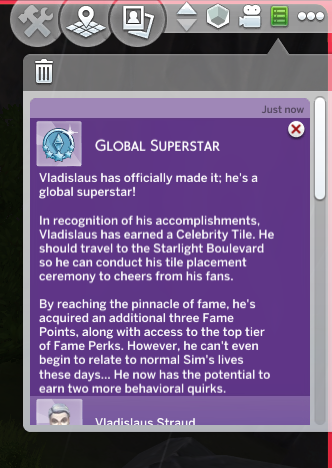 Vlad became a five star celeb! He and Caly make quite the celebrity power couple now. Once Vlad finishes his painting aspiration, I’ll have him do the world famous celebrity one so that he stays famous. 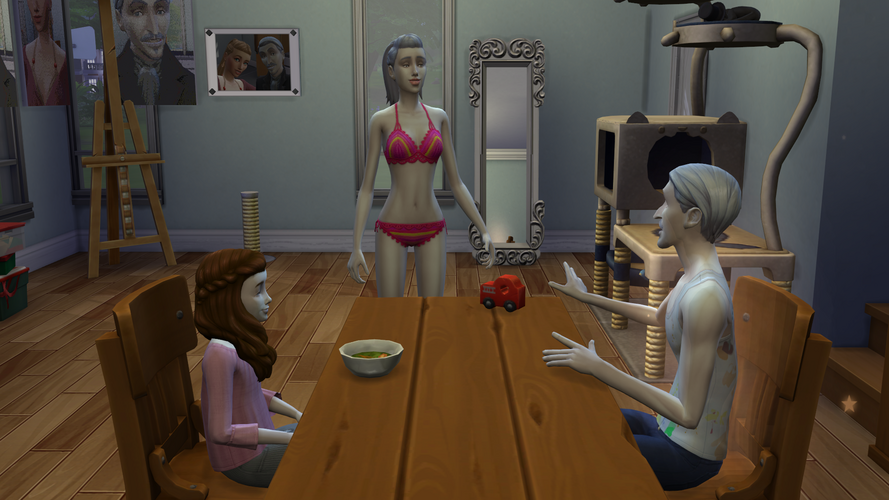 Vlad: Girls, your father is now a world famous artist. I’m going to get my own tile on Starlight Boulevard in recognition of my achievements. What do you think of that? 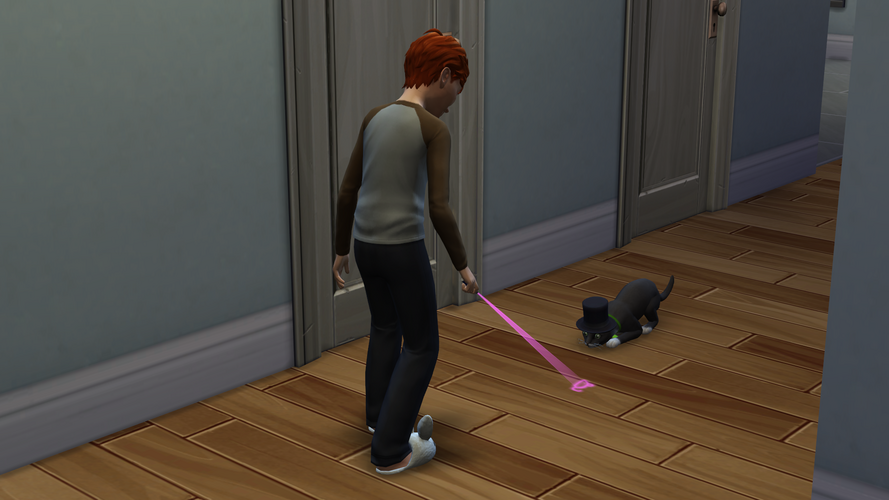 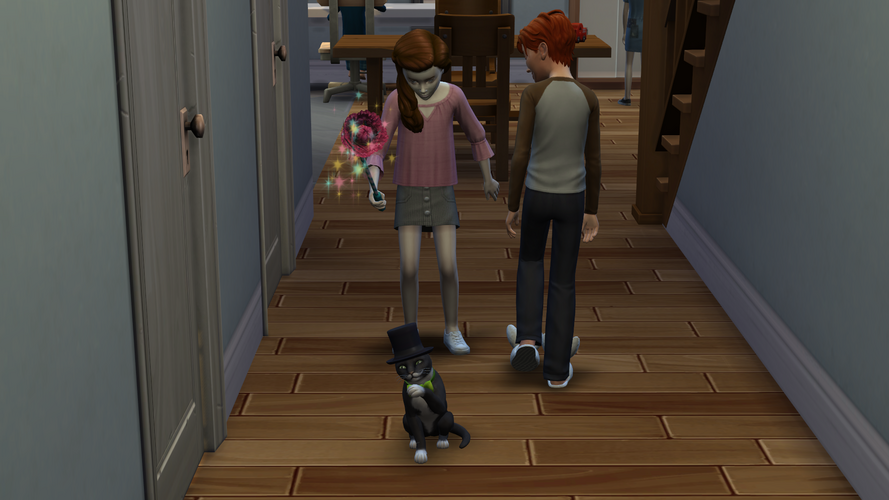 Galatea: Go away Epimetheus, Mayor wants to play with me! Don’t you Mayor? Hey, why isn’t he looking at me?

Mayor: You children bore me; I want to play with neither of you. A sophisticated cat of my intellect cares not for laser pointers or sparkly sticks. 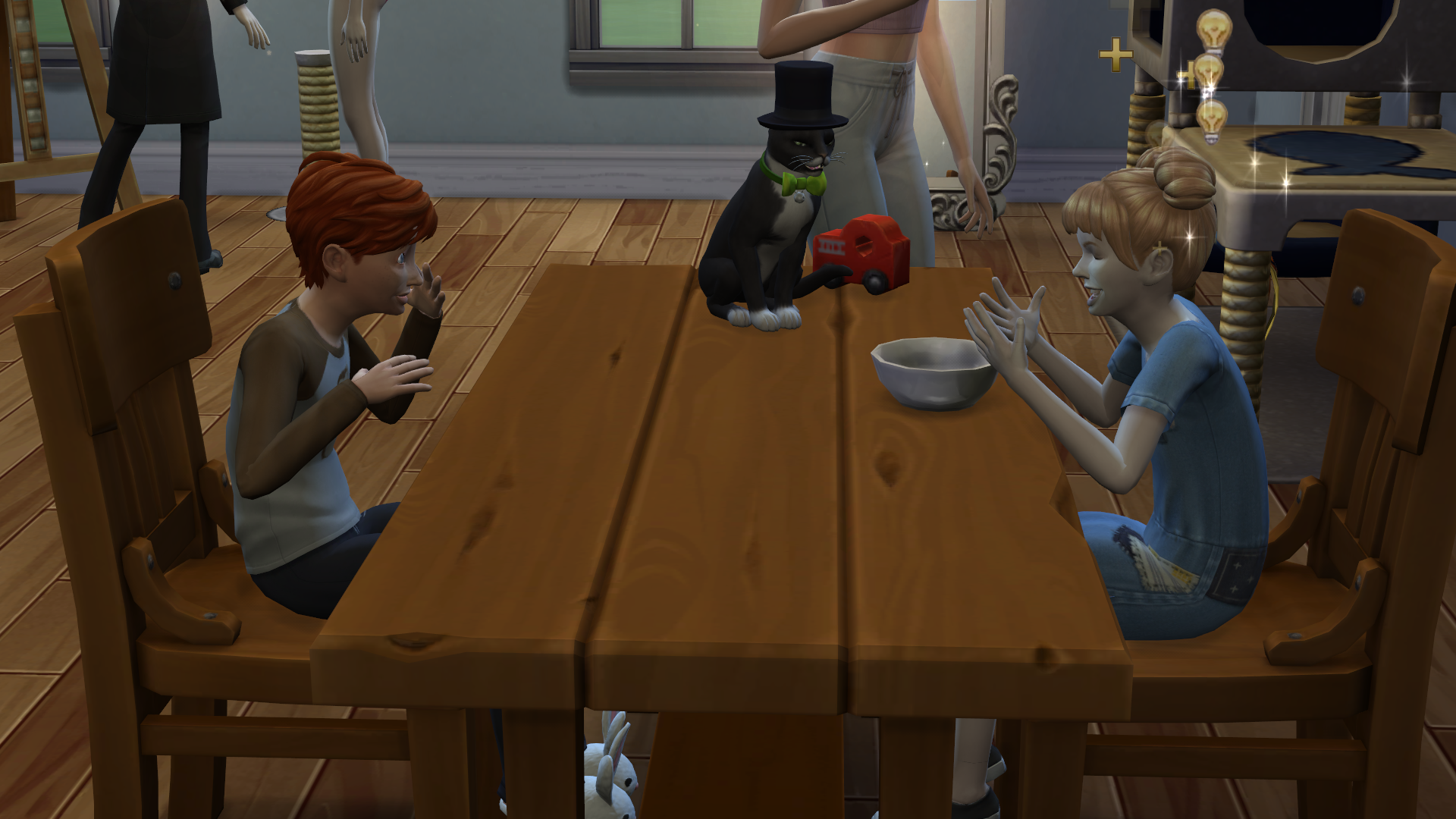 Circe: … And then, the teacher sat on the pin!

Epimetheus: No! What happened then? Did you get into lots of trouble?

Circe: Of course not, I threw Galatea under the bus so she got detention.

Mayor: I find I have an affinity with this human. 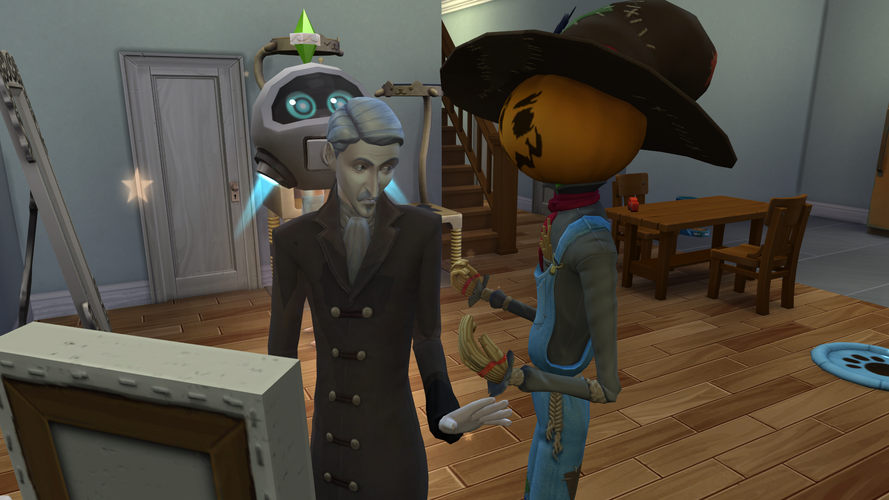 Patchy came to life and it turns out he’s a fan of Vlad’s because the first thing he did was ask Vlad for an autograph.

Patchy: It’s such a privilege to be a scarecrow in the house of Vladislaus Straud! Could I please have your autograph?

Vlad: How about no. 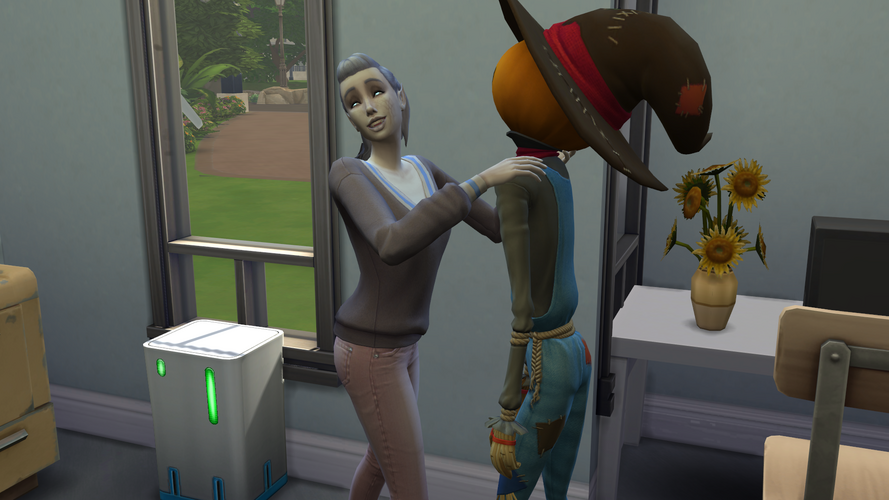 Scylla: I think I’m getting the hang of this vampire thing. How am I doing, Dad? 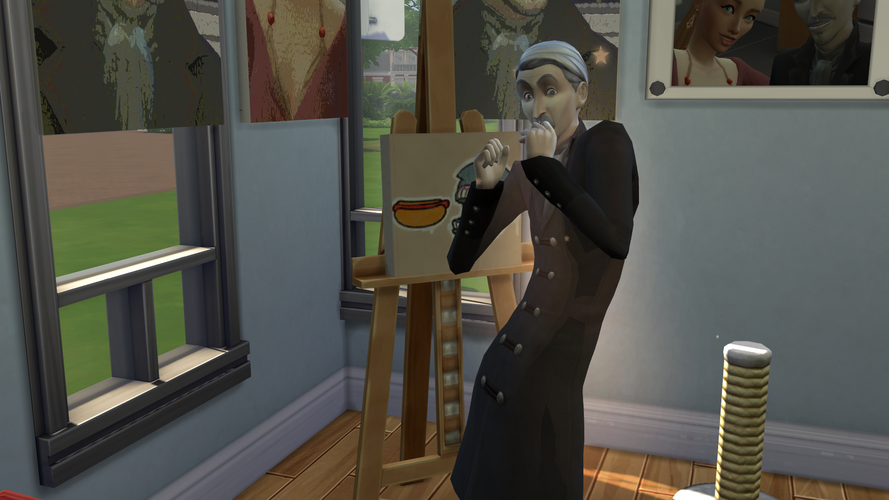