In the previous chapter, Galatea became a child, Mayor Whiskers joined the family and Vlad got started on his journey to stardom. That’s about it I think! 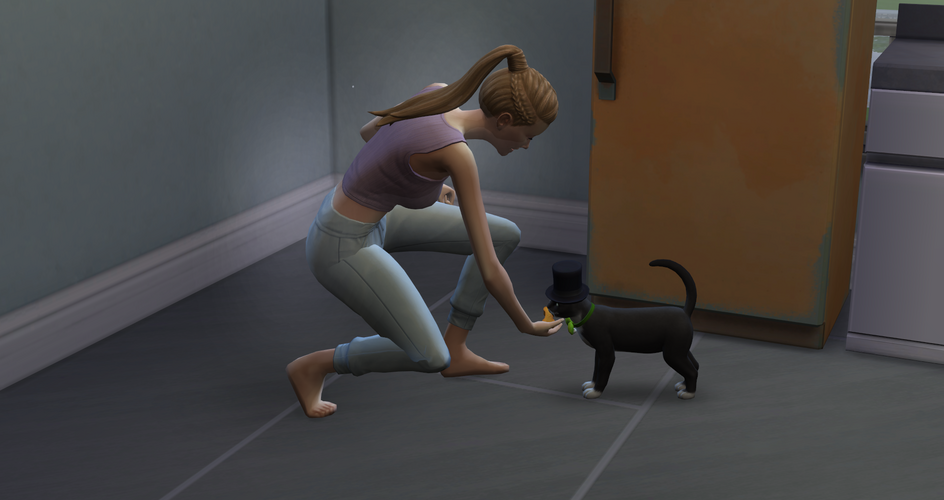 I could see with MCCC that Mayor Whiskers was on his last day of adulthood before becoming an elder. Since he only just joined the family, I decided to give him an age down treat to send him back to the beginning of the adult lifestage – at least, that’s what I thought I was doing. 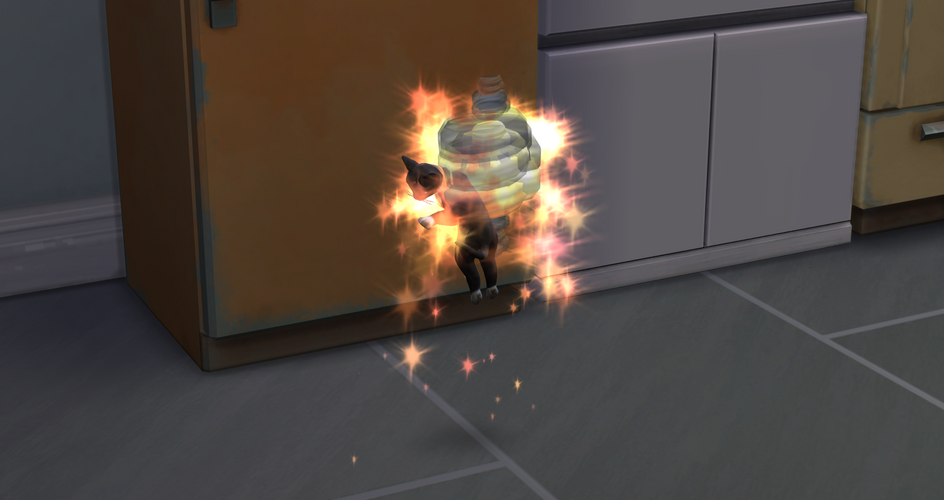 After Caly gave him the treat, Mayor was lifted up into the air in a cloud of sparkles. 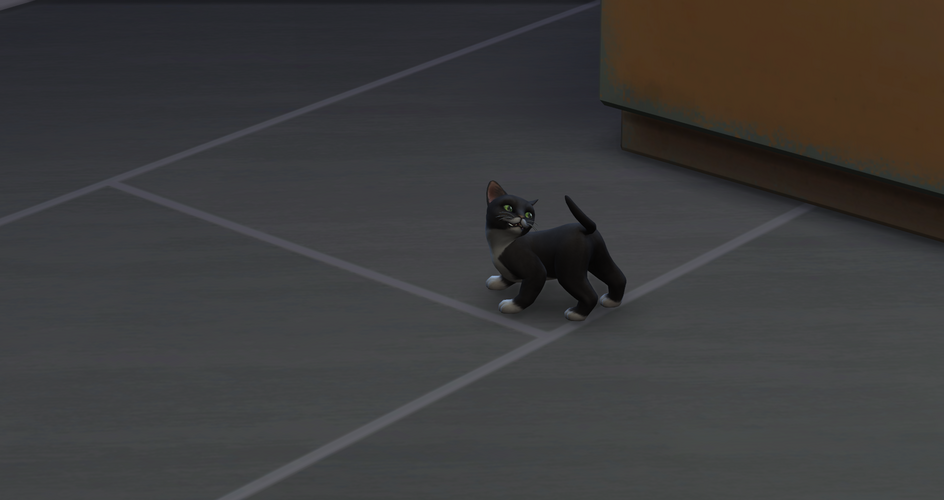 Mayor: Why is the world suddenly so much bigger? Oh no, where’s my hat? 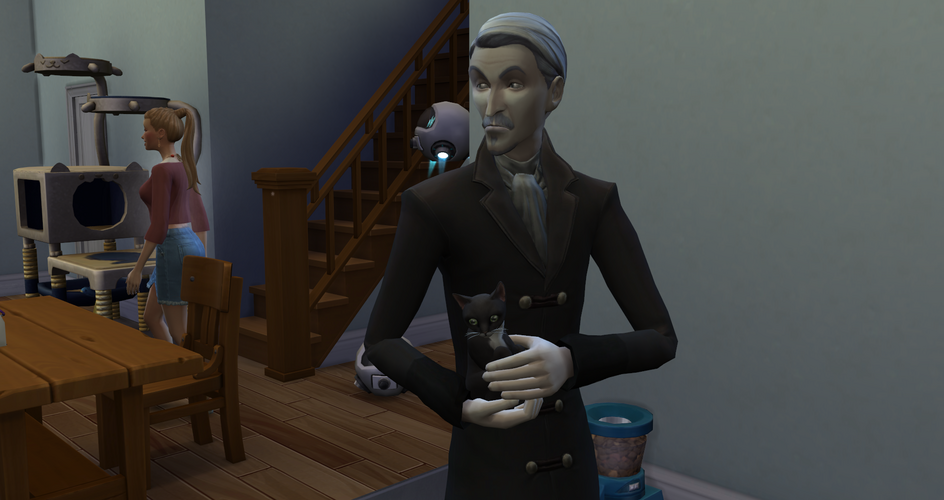 Vlad: Honey, what happened to my cat? Why is he so tiny?

Caly: Well, maybe he shrank in the wash.

Look how well camouflaged Mayor is against Vlad’s coat. 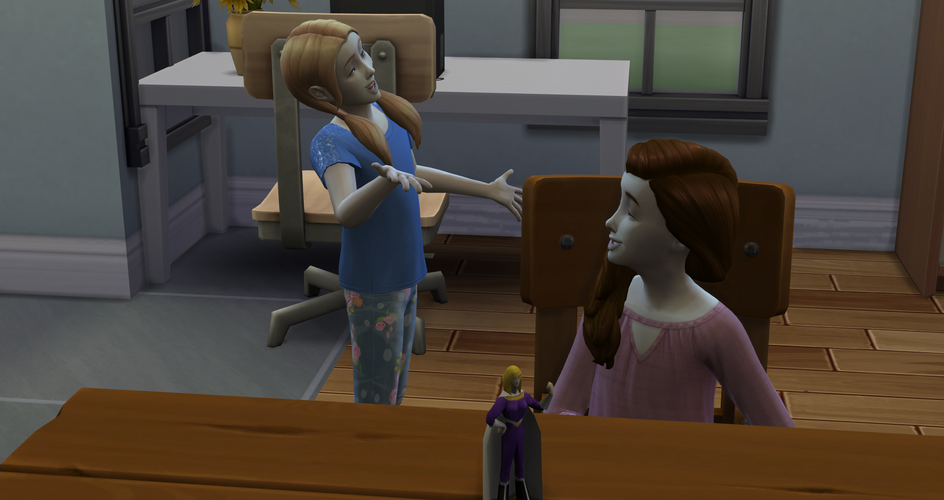 Scylla: Since I completed my aspiration, I think the evil voice has been ignoring me.

How acute of you Scylla, that’s exactly what I’ve been doing. And you will get no further screenshots in this chapter either!

Galatea: At least you get to do what you want now. I have to spend all my free time talking to strangers and last night the evil voice didn’t let me sleep until 2am. 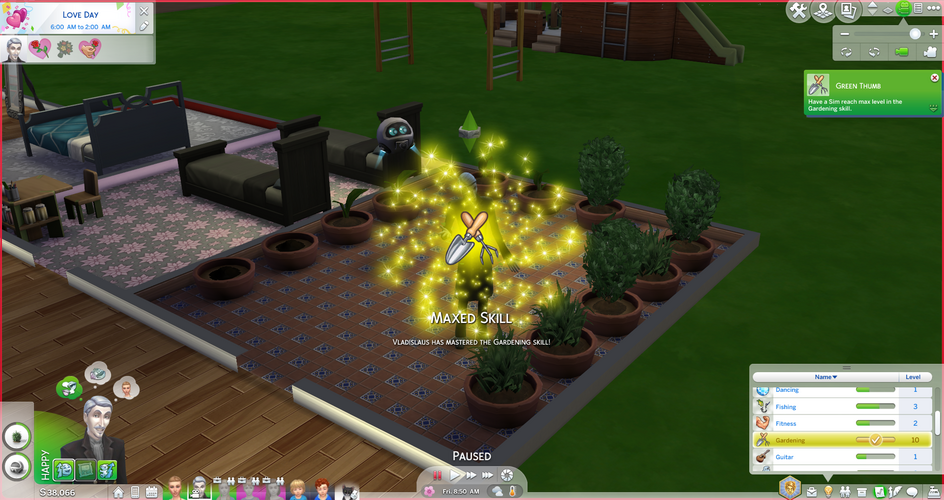 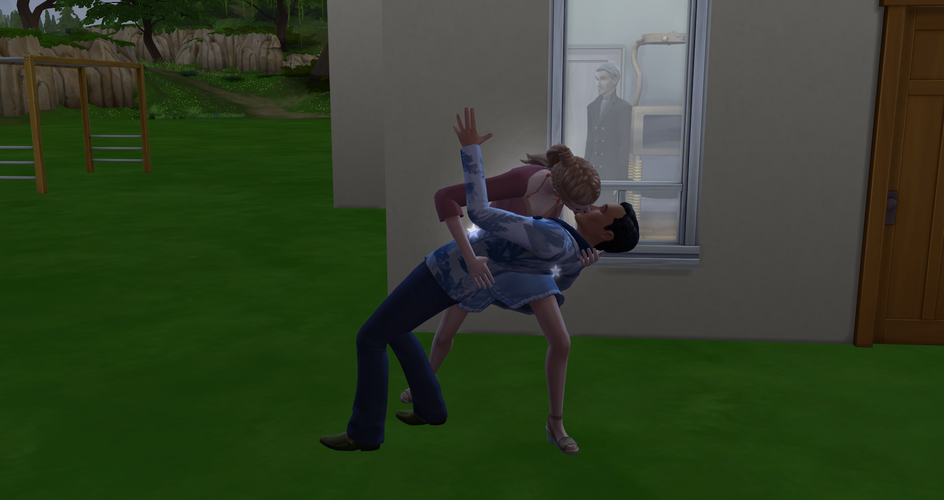 Vlad glanced out the window and was met by the sight of his wife cheating on him.

Nah just kidding. Caly had to perform two romantic scenes for her career – this is just a coworker.

Coworker-whose-name-I-forgot: Wow, that was pretty hot. Do you want to get a drink after this?

Caly: Excuse me, I am a married woman! You think I would cheat on my handsome husband with your ugly self? Not a chance! 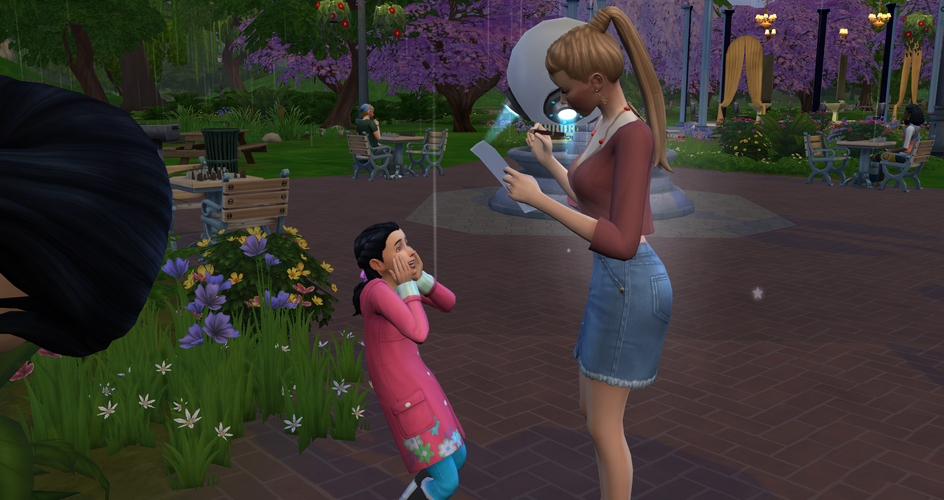 For her aspiration, Caly still needed one more fan to ask her for a photo so I sent her to hang out at the park in the hopes a fan would come and make the necessary request.

Little girl: I can’t believe I’m finally meeting you, you’re my idol! When I grow up, I want to be a famous actress just like you!

Caly: Aww how sweet. You won’t manage it though, you don’t have what it takes. We can’t all be beautiful demigoddesses after all. 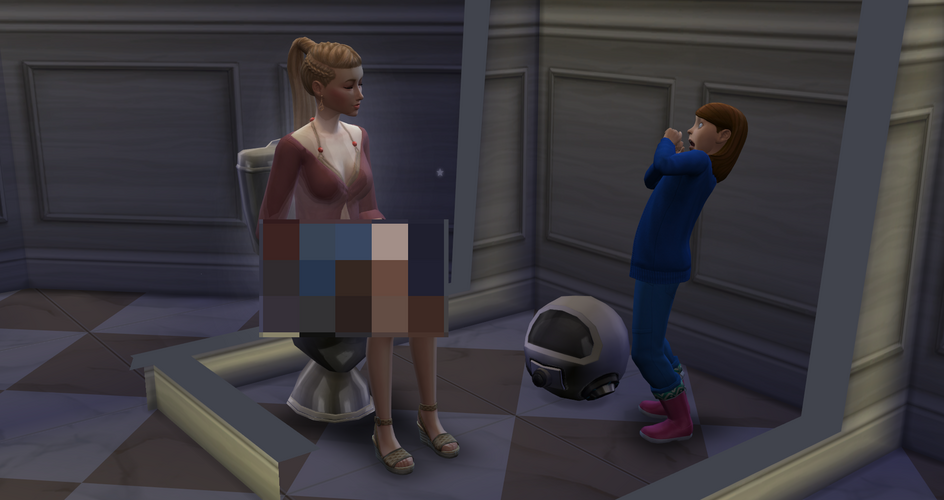 Caly went to the toilet and this overzealous fan followed her inside… Then looked shocked to find her peeing. Well what did you expect to find? 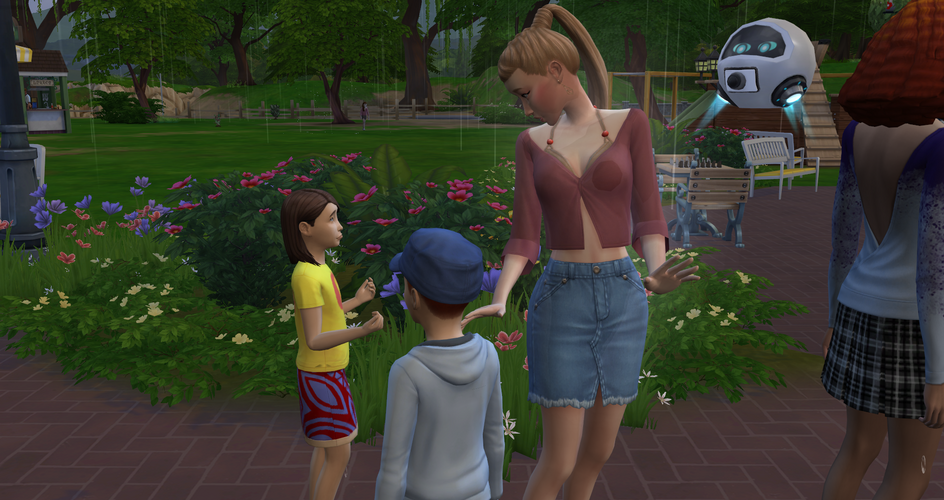 The fan who had found her in the toilet approached Caly outside (he is wearing different clothes but it’s the same boy).

Fanboy: Um I’m sorry about earlier. I just really wanted to meet you, I’m your biggest fan. I suppose I can’t have an autograph now?

Why couldn’t you have been useful and asked for a photo, boy? Alas, Caly left the park still with that third photo request unmade. 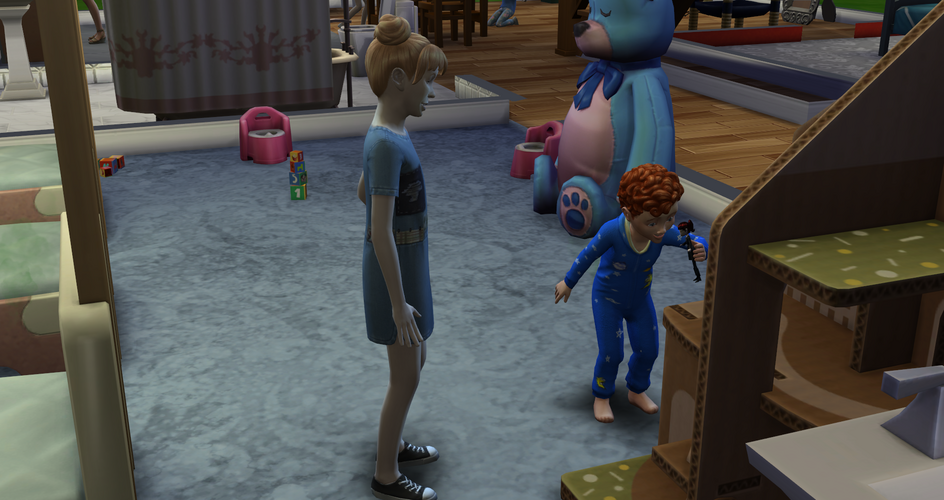 Epimetheus: Want to play dolls with me, Circe?

Circe: Sure, let’s start by pulling off their heads. 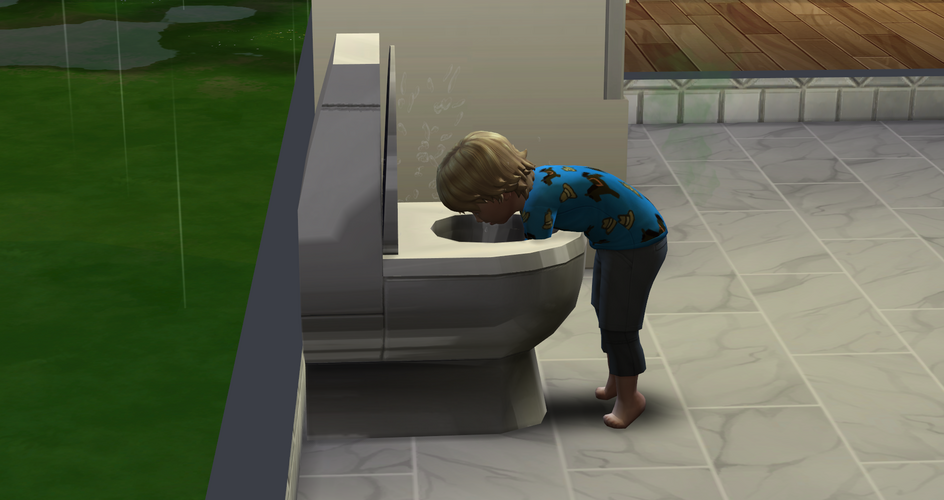 Atlas: Finally, somewhere I can wash myself! It’s been so long since I was clean. Funny yellow water though. 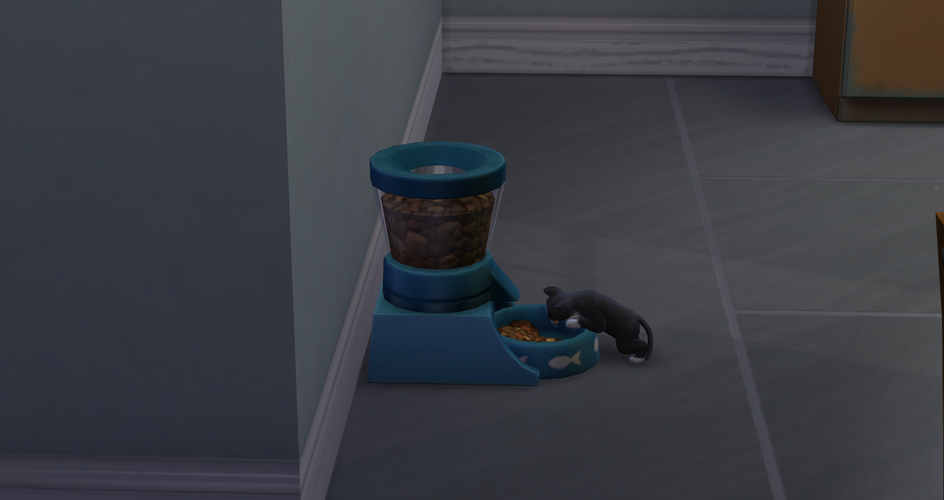 Kitten Mayor Whiskers is so adorably tiny! He can barely reach his food.

Mayor: How dare you make me like this? You can’t just go around shrinking people!

Relax, you’ll grow big again… Eventually. And your life is extended, so you have that to be grateful for. 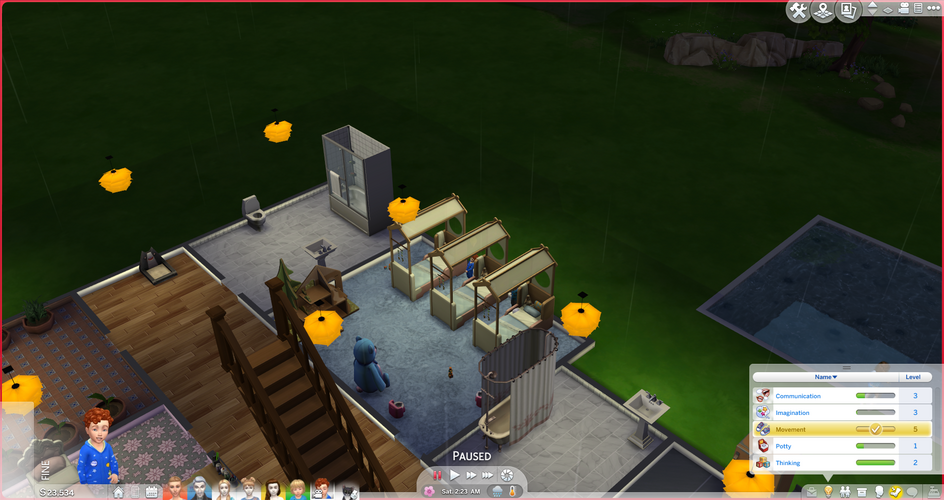 Epimetheus maxed the movement skill at some point. When I don’t know because honestly I have pretty much left the twins to their own devices. They’re not even toilet trained. Oh how I wish they didn’t exist. 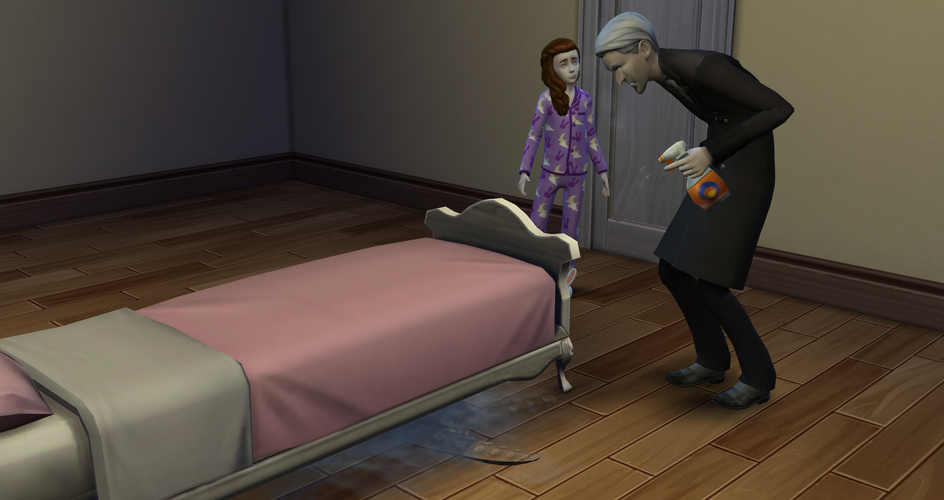 I forgot to put a night light in Galatea’s room so of course the monster under the bed turned up. I’ve put a night time defender light in there now so it won’t come back.

Galatea: Dad, there’s something under my bed. I think the evil vampire bat found me!

Wow you really traumatised her with that story huh, Vlad? 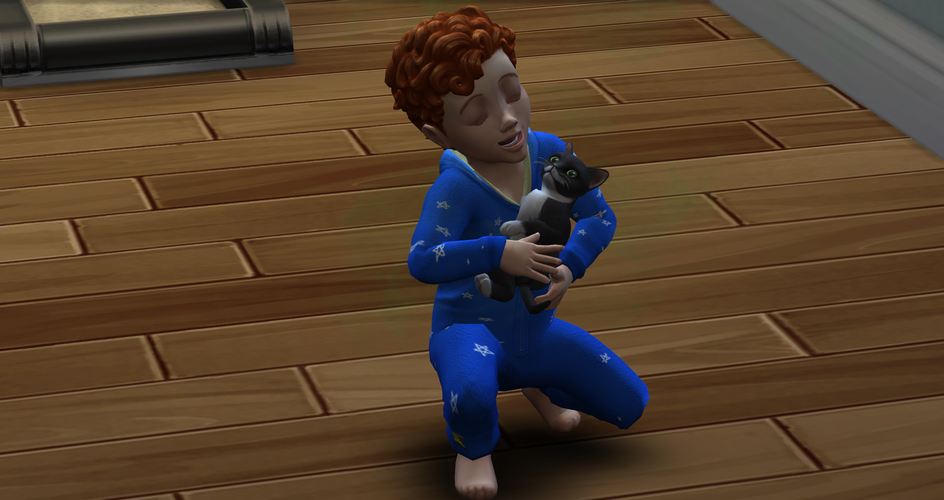 Mayor: Little puddy cat will claw your eyes out if you don’t put him down right this second! 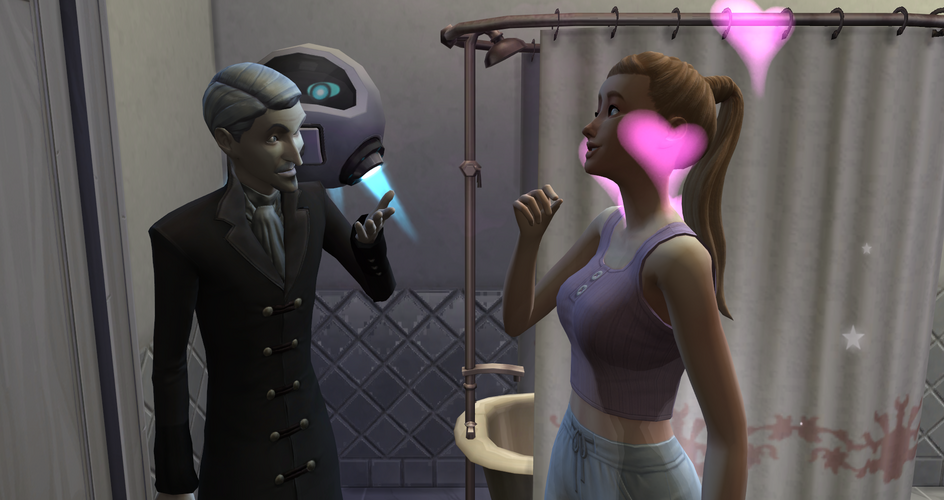 Vlad: Let’s hide from kids in here and make out. 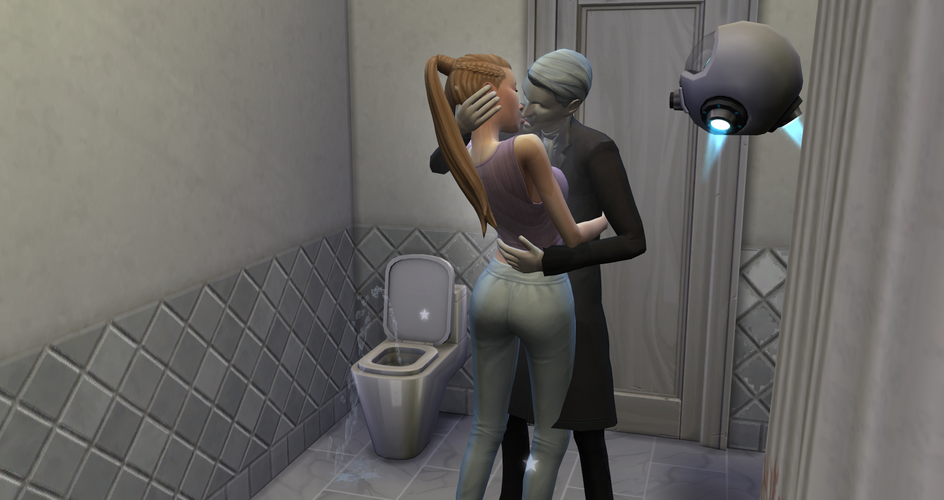 Ah kissing next to the toilet. Romance isn’t dead. 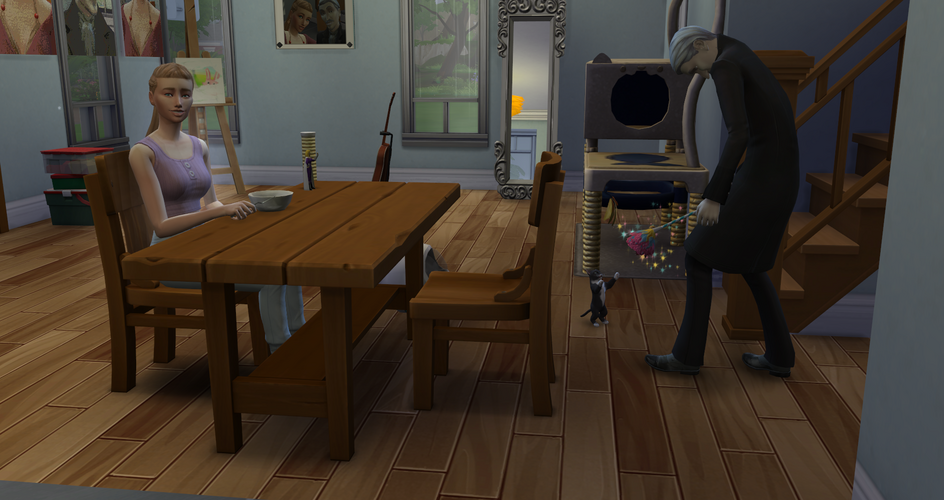 Caly: I don’t like this. My husband is obsessed with that cat, he should be giving me his undivided attention.

Vlad: But look at him Caly, he’s standing on his back legs like a little meerkat!

I had to remove the cat wand from Vlad’s inventory because he kept autonomously going to play with Mayor Whiskers when I was trying to get him to do other things like painting. 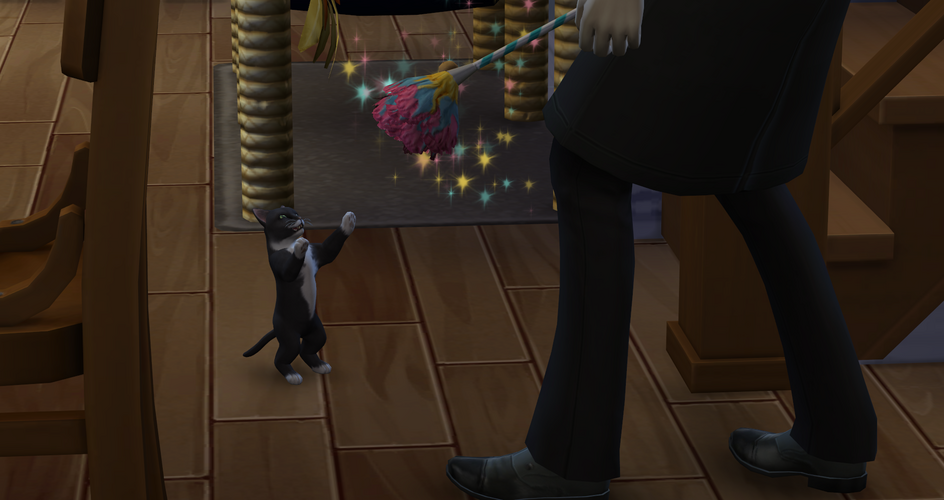 My heart. So cute. 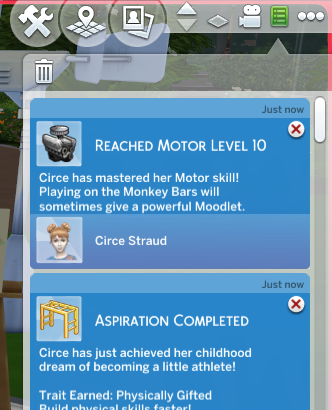 Circe maxed the motor skill and completed her aspiration! 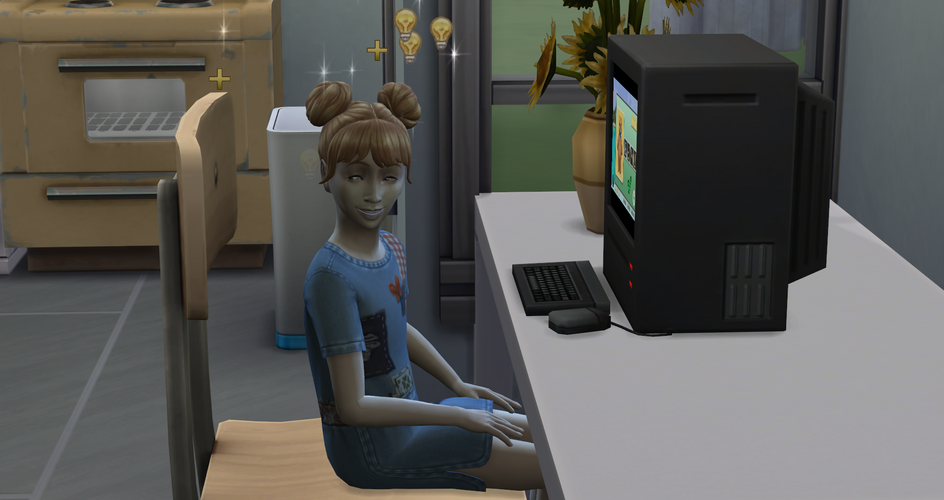 Right. And now I get to ignore you! 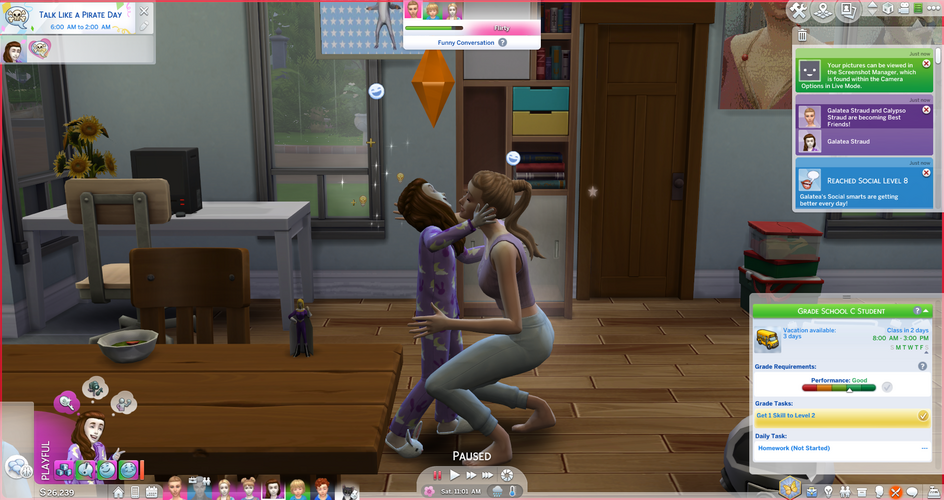 Galatea: Mum, will you be my best friend?

Caly: Well you are my most attractive child so alright. But don’t tell your siblings!

Galatea had to make a BFF for her aspiration and she had the highest relationship with Caly, so they became best friends.

Being best friends with your Mum is a bit sad, Galatea. 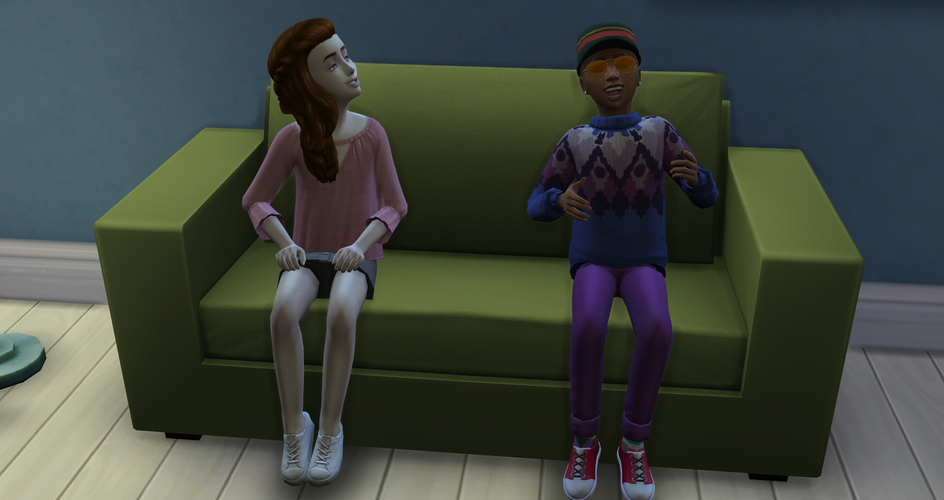 For the next milestone of her aspiration, Galatea needed to make friends with 3 children. First off, she headed to the Kahananui household to become friends with Shannon, the son of Keoni and Candy.

Galatea: If my Dad had married your Mum or your Dad, you wouldn’t have existed.

Shannon: Yes but neither would you!

Galatea: Oh. I hadn’t thought of that. 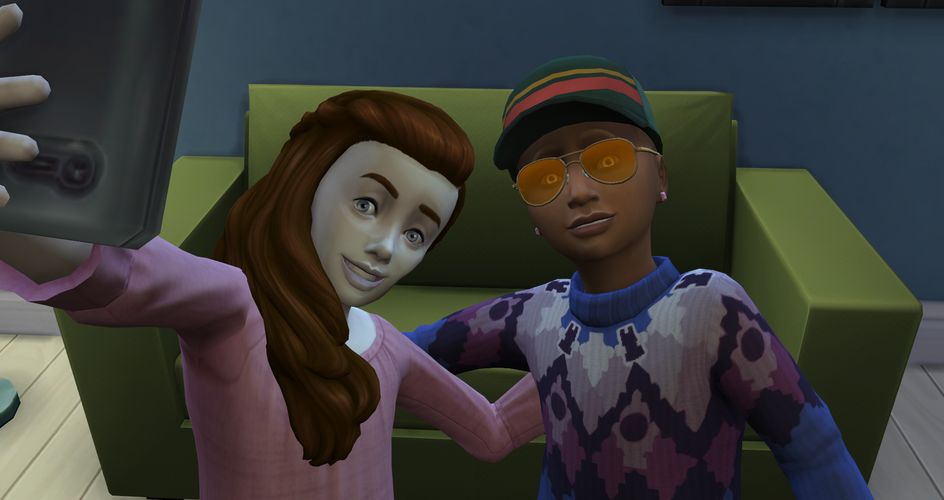 I was feeling lazy and taking pictures with another sim is a quick way to build friendship with them so I had Galatea spam the ‘take picture with’ interaction with Shannon.

I love how you can see Shannon’s glowy yellow eyes behind his sunglasses. 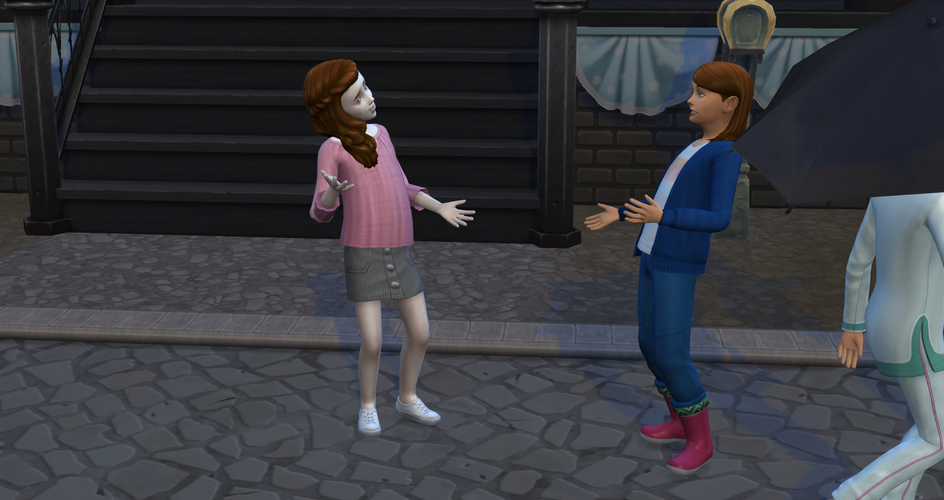 Next, I sent Galatea off to Straud Mansion where Bunny now lives with her husband and three kids.

Galatea: So, this is the place that Dad goes on about so much. I’m glad we don’t live here after all, it’s kind of creepy.

Vasyl: Oh my gosh I know you, you’re the daughter of Calypso Straud!

Vasyl: I’m such a big fan! The other day I saw her in the park and I followed her all the way into the toilets to ask for an autograph, but she wouldn’t give me one. Do you think that you could ask her for me?

Galatea: Er sure. Hey, what about we take a picture together?

Vasyl: Oh yes, that way I can always remember the day I met Calypso Straud’s daughter.

Yep, the boy who walked in on Caly while she was on the toilet earlier turned out to be Vasyl. 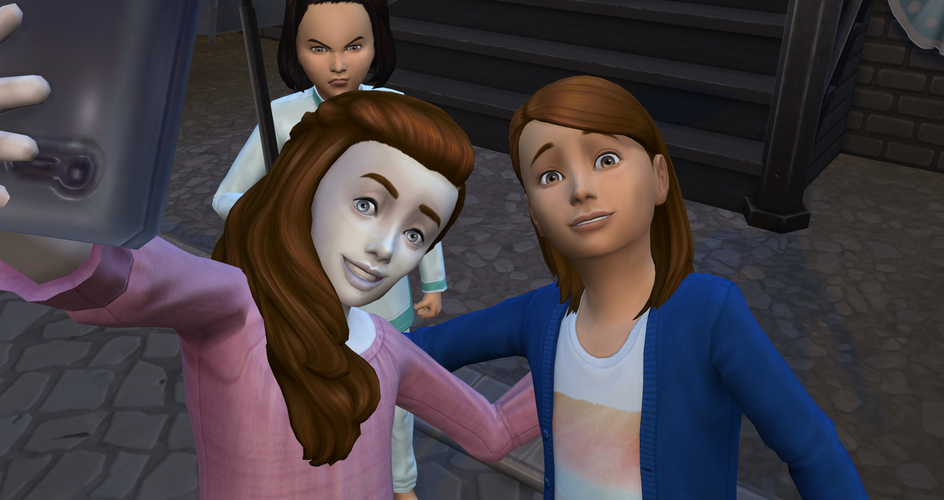 Bunny’s-daughter-whose-name-I-forget: Not fair! I want to be included in the chapter too!

There, you have your wish: you’re included. And that scowl is preserved here forever.

After that, I was going to send Galatea off to make friends with Caleb and Roland’s son but then I noticed that her aspiration panel thingy said she had completed the ‘make friends with 3 children’ task. So, I guess she must have made friends with either Scylla or Circe while that stage of the aspiration was active.