Last time, Scylla became a child, Vlad grew and planted a dragon fruit, Caly became a three star celeb and Vlad became a grand master vampire. Oh also Vlad and Caly decided not to have any more children – thank goodness for that! 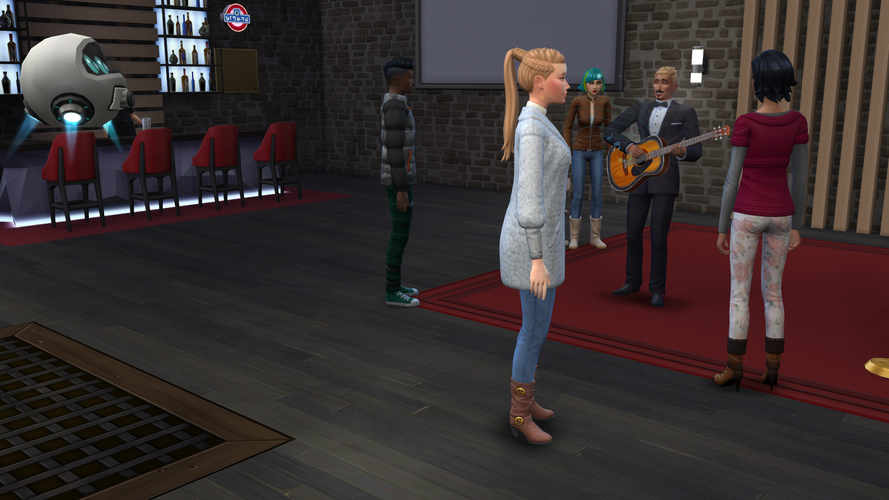 For her aspiration, Caly needs three fans to ask for a picture with her which is the most annoying part of the World Famous Celebrity aspiration in my opinion. So, I made Caly go to this place in Del Sol Valley and hang around waiting for fans to come and request a photograph.

Caly: I’m sure this won’t take long. I’m a demi-goddess, the fans should flock to me. Hey, why are they all watching that nobody? They should be adoring me!

That nobody is a four star celebrity, that’s why. 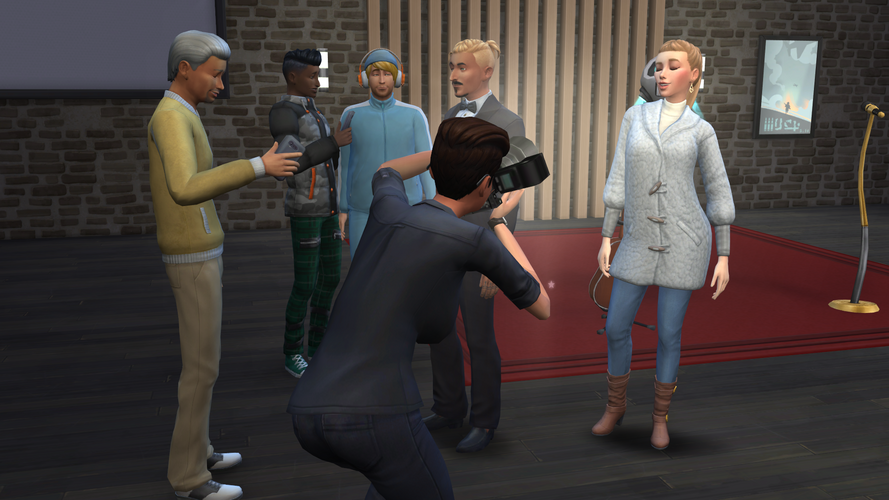 Caly: At least this paparazzi knows quality when she sees it!

Paparazzi: Can someone get this girl out of the way? She’s ruining my shot of Thorne! 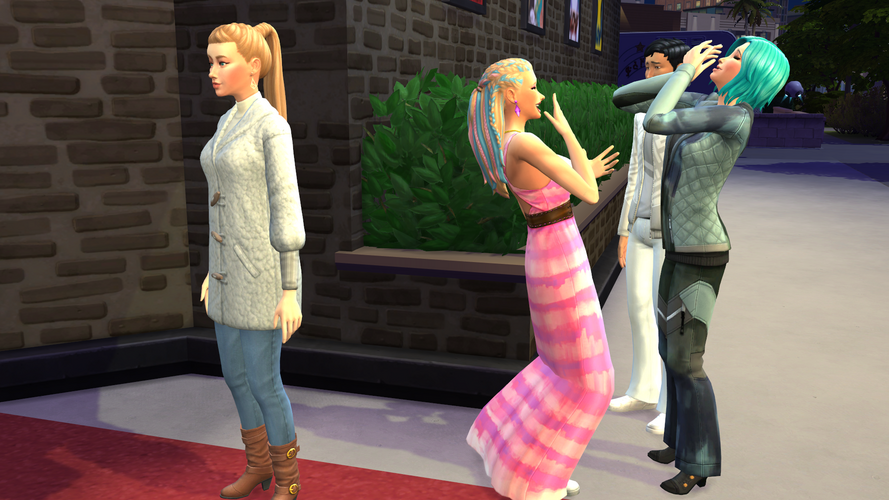 Yuki: Look over there, is that Calypso Straud?

Candy: That girl is so weird. Once, I was in a bachelor challenge with her and she walked around the house in front of everyone completely naked – on multiple occasions!

Caly, they are literally laughing at you behind your back.

Caly: You must be mistaken, nobody would laugh at the daughter of Atlas. 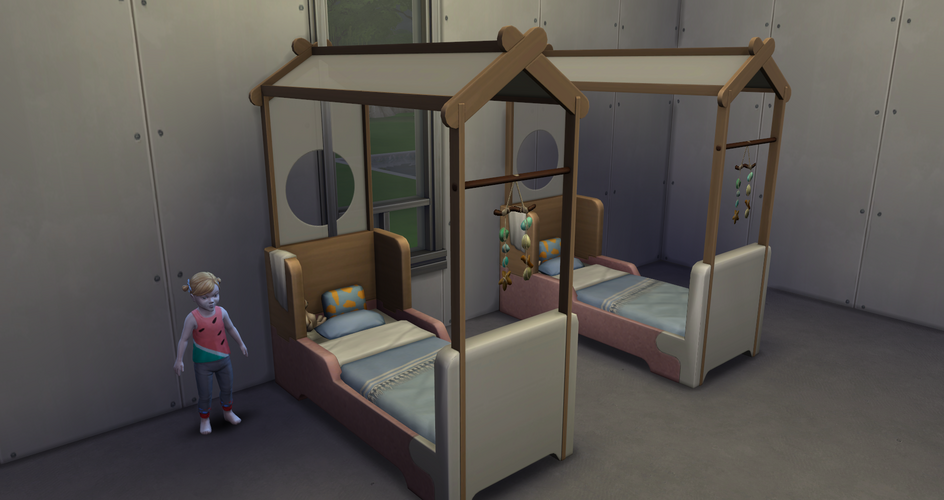 Finally, we got some nice toddler beds (they still have a crappy energy rating though)! As you can tell from this, I did buy Eco Lifestyle. I really should have waited for a sale because I’m not crazy about the pack… Oh well what’s done is done. 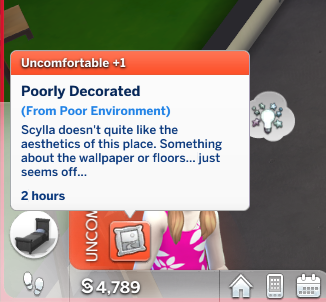 Scylla complained that the house wasn’t properly furnished, which I believe is a feature which came with the last patch. So, I was forced to actually go to the effort of putting floor and wall coverings in the house. 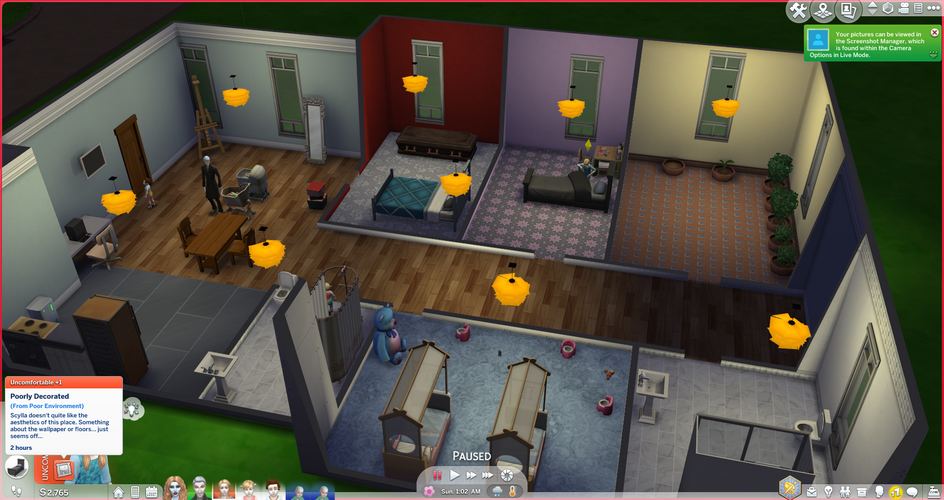 I know, it looks bad. In fairness though, I did this as quickly as I could because I wanted to get back to playing. Also, I had a limited choice because I tried to only choose wall and floor coverings with a good environment rating so that they’d stop complaining about the furnishings.

Scylla was still unhappy after all that! Fortunately though, the moodlet did go away after 2 hours and it didn’t come back. 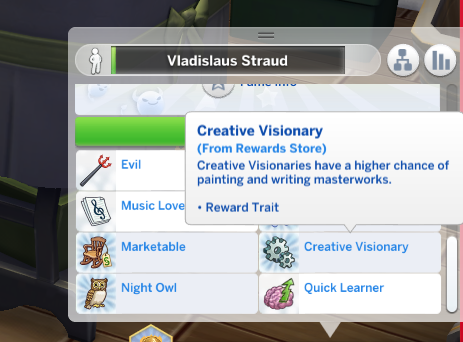 I noticed that Vlad had quite a few satisfaction points so I got him two new reward traits to help him make money from painting. The first is the ‘creative visionary’ trait which will help him paint masterpieces more often. 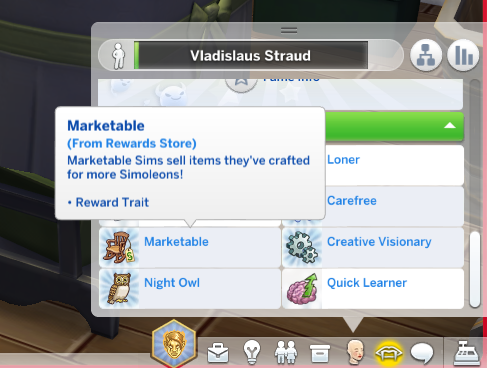 The second reward trait is the ‘Marketable’ reward trait. Having this should mean that his paintings sell for more. 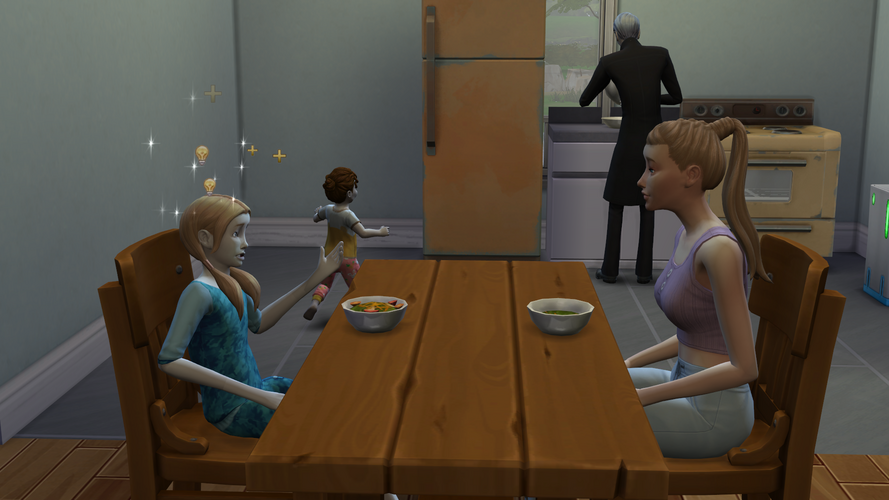 Caly: Well, are you going to say good afternoon to your grandfather, Scylla?

I actually don’t remember what time of day this was taken at. It may well have been morning but Vlad is making Circe’s birthday cake in the background and I think she aged up in the afternoon. 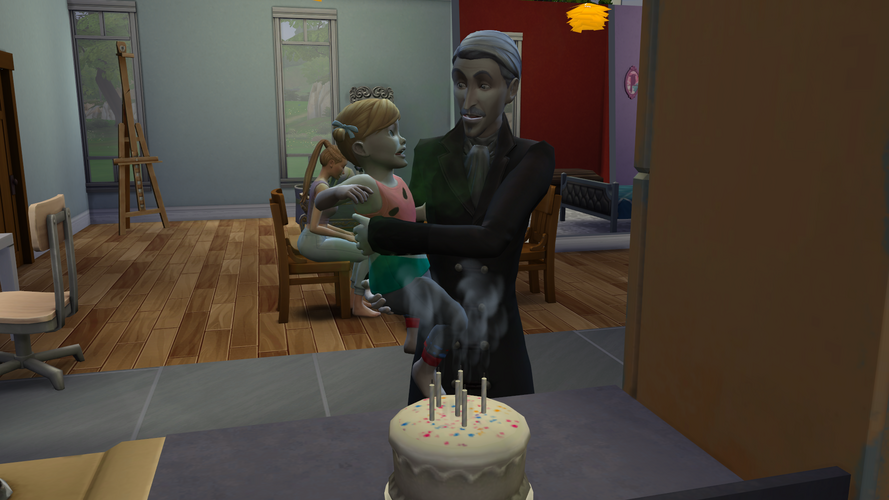 Circe’s birthday arrived and she became a child! She got the gloomy trait and the rambunctious scamp aspiration. Oh and she also got the ‘happy toddler’ bonus trait.

Here’s some CAS close up shots: 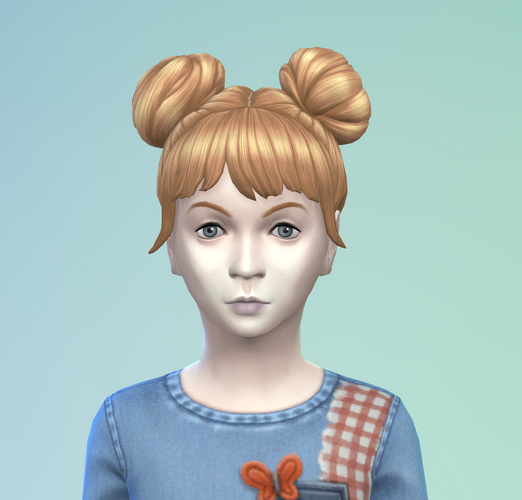 This hair and dress are both from Eco Lifestyle and I really like them both. Unfortunately though, there isn’t a lot that can be done for Circe’s appearance. Let’s just say that you can already tell she takes after Vlad very strongly! From the front, you can see she has Vlad’s mouth, eyes, eyebrows and of course skin colour. 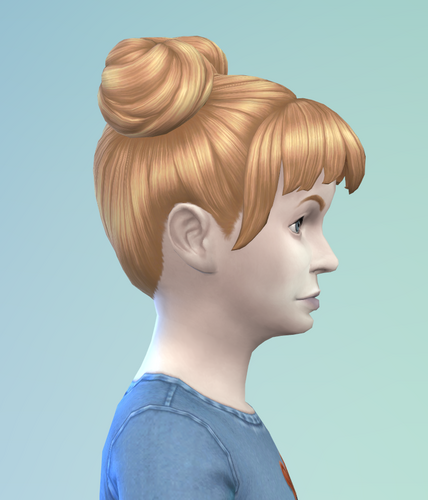 From the side, things are even worse lol. She definitely inherited Vlad’s nose and chin! 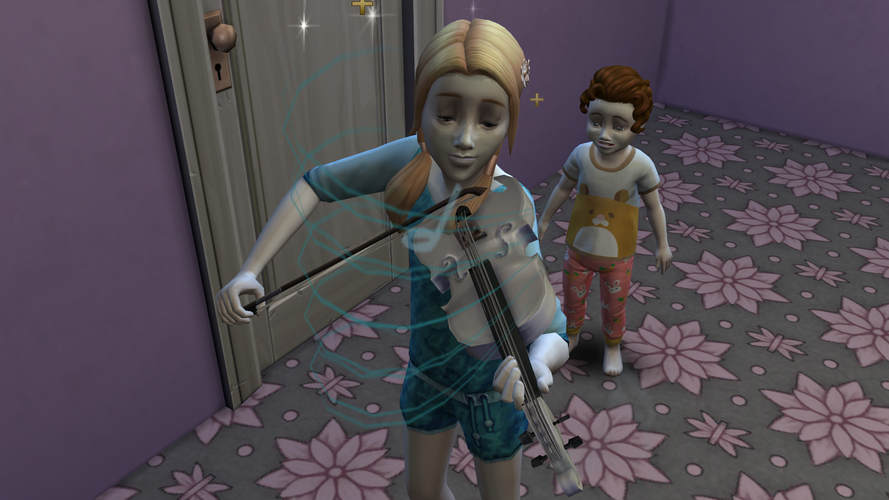 Galatea: Scilly, will you play with me? I tried to play with Cece but she told me to shut my stupid mouth.

Scylla: Can’t you bother someone else, Galatea? The evil voice is making me play the violin for five hours.

Galata: I could just stand and watch you – I’d be very quiet.

Scylla: No, you couldn’t. It’s creepy and unnerving! I need to concentrate.

By the way, I didn’t mistype Scylla. I thought Scilly would be a cute nickname. Cece works for Circe but I can’t think of one for Galatea (Tea?) or Epimetheus (Theo?). Atlas can’t really be shortened. 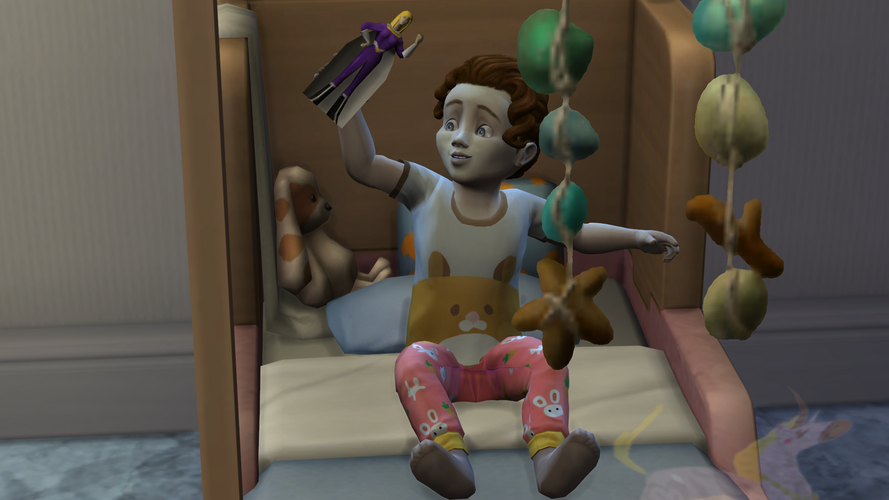 Galatea: I love you, superwoman. You never tell me to go away. 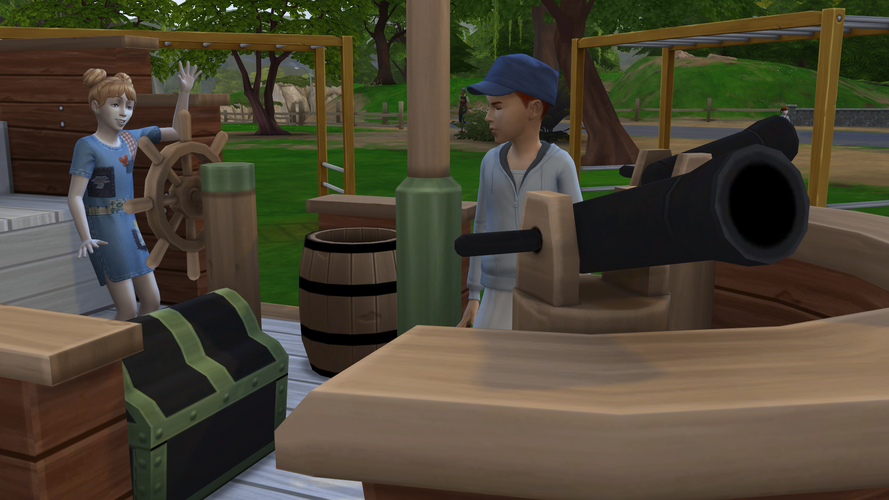 Circe had to play on a jungle gym for her aspiration so I sent her off to the park where she met this random girl. 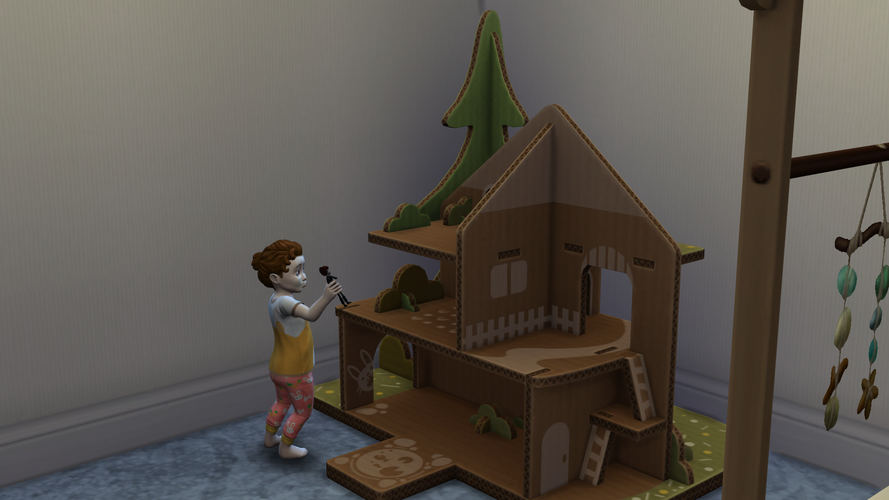 This cardboard doll house is another addition to the house from Eco Lifestyle. Why didn’t they just call it Eco Living? So much easier to remember! 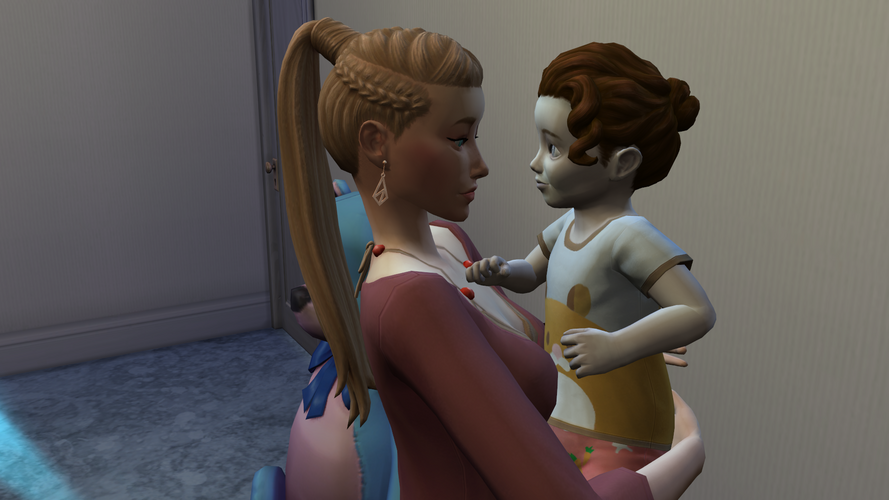 This picture of Galatea and Caly was so cute that I had to include it.

Caly: A mother never has favourites but you’re my prettiest baby, Galatea. Don’t disappoint Mummy by growing up ugly, will you? 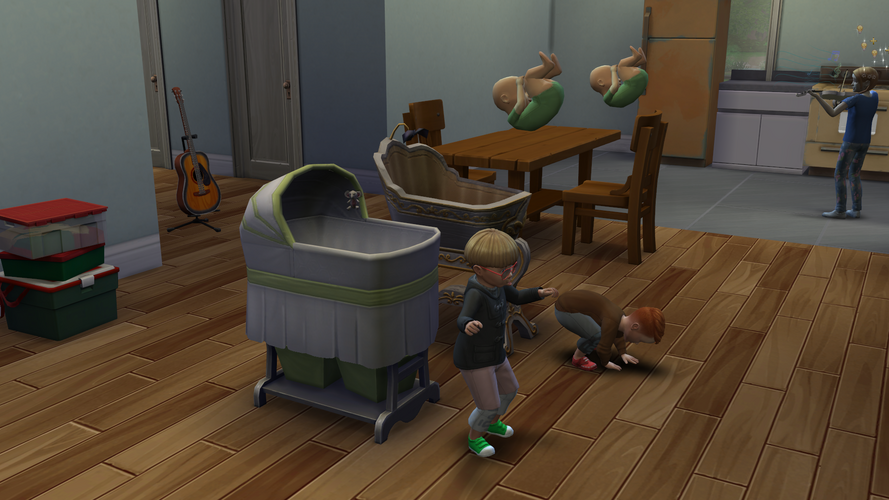 Atlas and Epimetheus aged up and for one terrifying moment they were each simultaneously a baby and a toddler. This glitch seems to happen every time a baby ages up on their own and I hate it. I forgot that it was their birthday which is why I didn’t have Vlad or Caly age them up in time. Too many children to deal with! 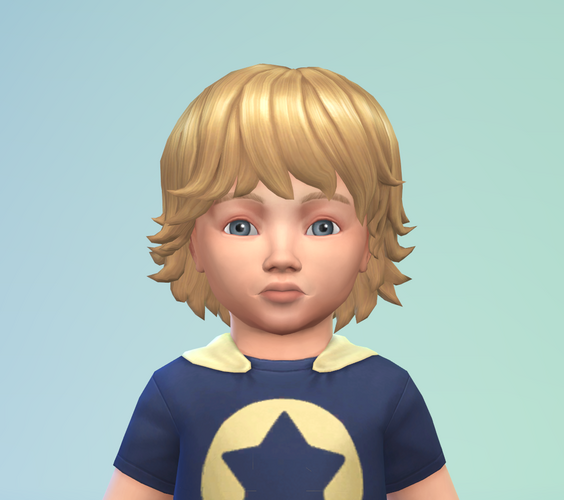 You can see that he has Vlad’s mouth but he is the first of the kids not to have Vlad’s eyes and also the first to escape the pasty white skin! 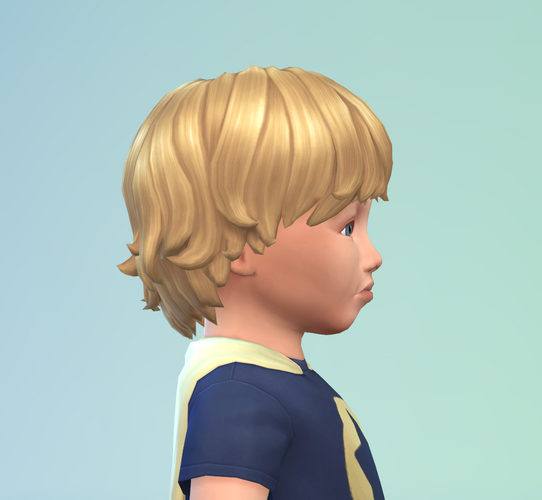 Looks like he won’t get a flat face or Vlad’s chin either. 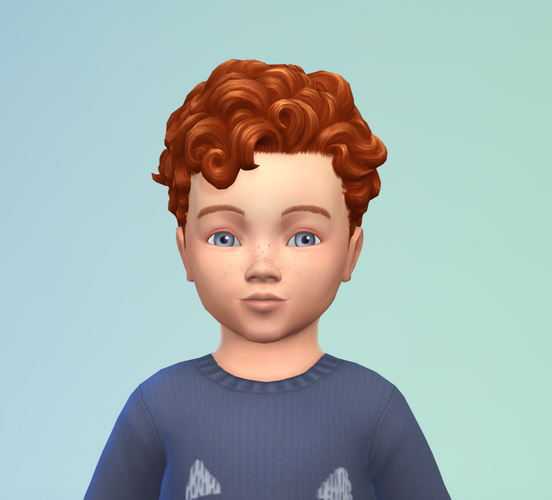 Epimetheus also got Caly’s skin tone and eyes. Plus, he inherited Caly’s freckles which is cute!

He has red hair because the game tried to give him Vlad’s grey hair and it isn’t available for toddlers. 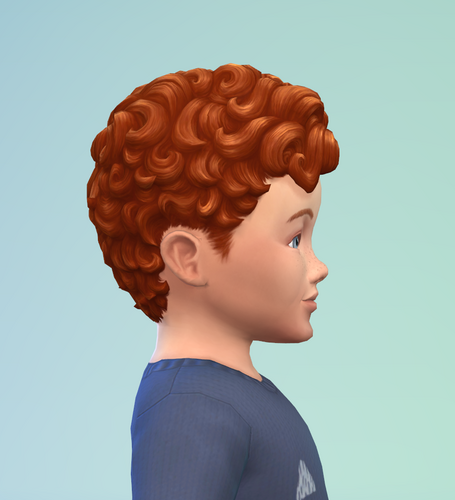 I spy a flat face, pointy chin and long nose. 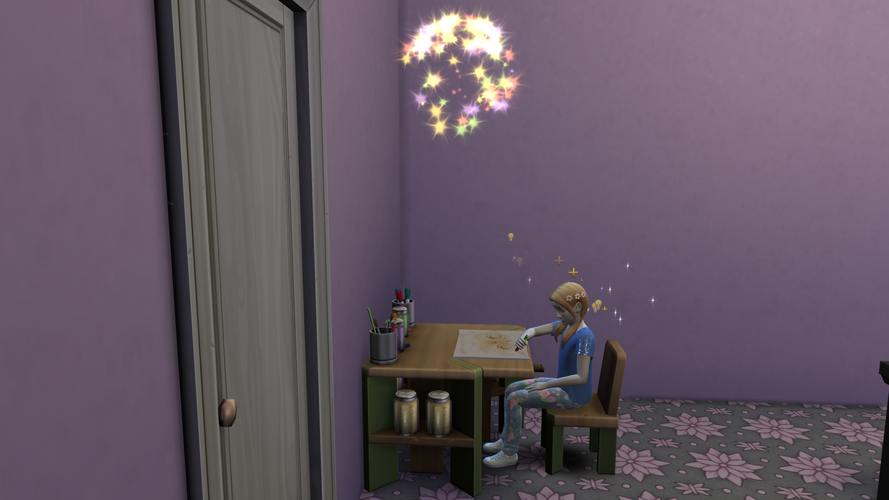 The fireworks that appear when a kid draws using the activity table make no sense, but I love them all the same. 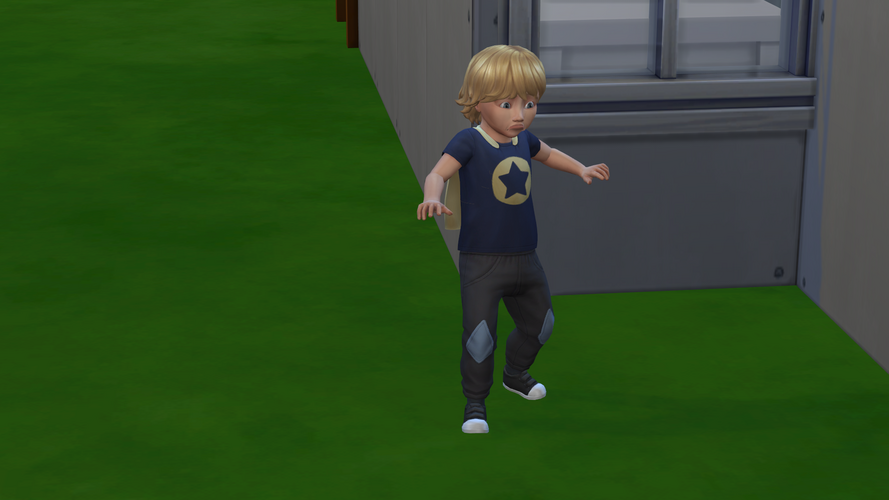 Atlas took one look about the house and made a run for it.

Atlas: I’m off to find a home where I won’t be ignored.

Not so fast, little man! 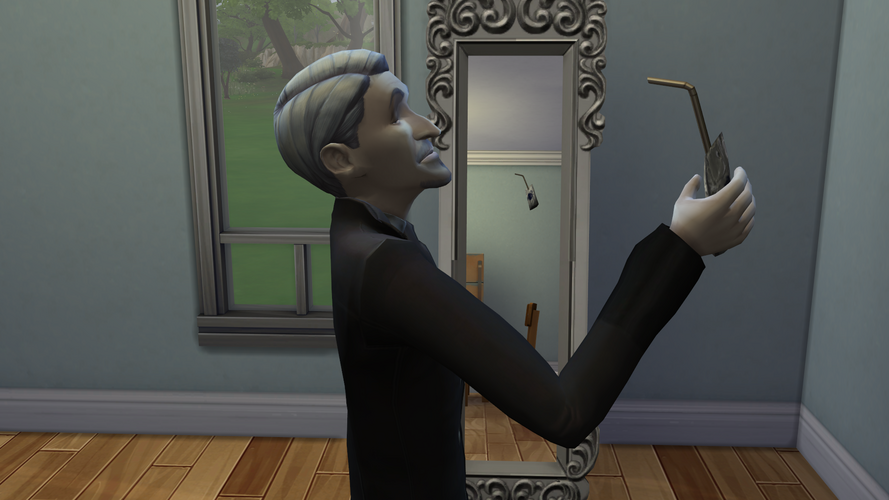 Vlad: Ugh I thought my days of drinking ersatz plasma were over.

Look, it’s the day time so unless you want to go outside hunting and burn to death I suggest you just quit complaining and drink the damn plasma pack.

Look at the reflection in the mirror of the plasma pack floating in mid air. 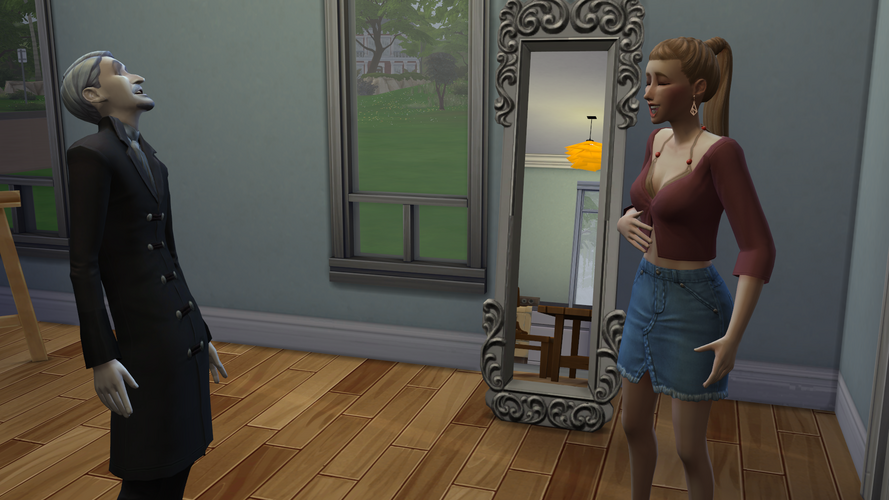 Vlad: And then I used my vampire powers to make everyone in the street talk to themselves.

Caly: Oh Vlad, you are awful. That’s just the sort of prank that my father would approve of! 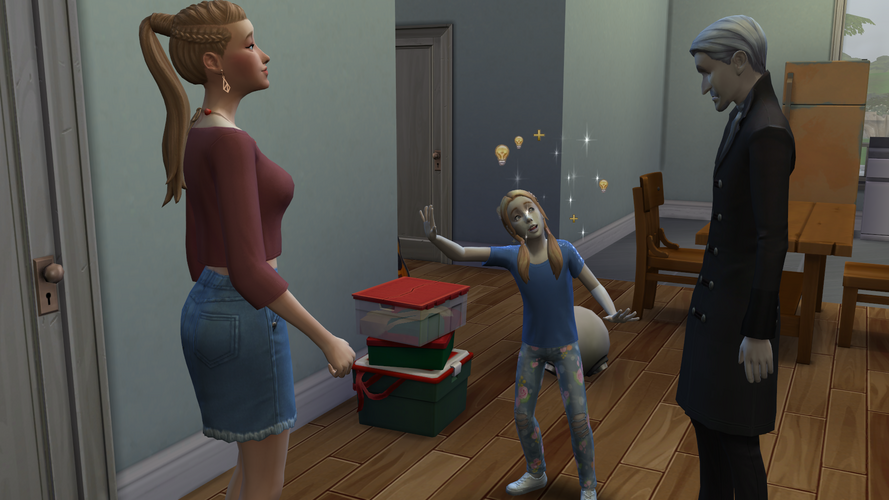 Scylla: Mum, dad I thought being a kid would be fun but the evil voice is making me work non stop on my creative skill and I’m booooreed..

Caly: You just wait until you’re in labour and the evil voice forces you to go to spend a full day at work anyway.

Still holding a grudge about that huh, Caly? 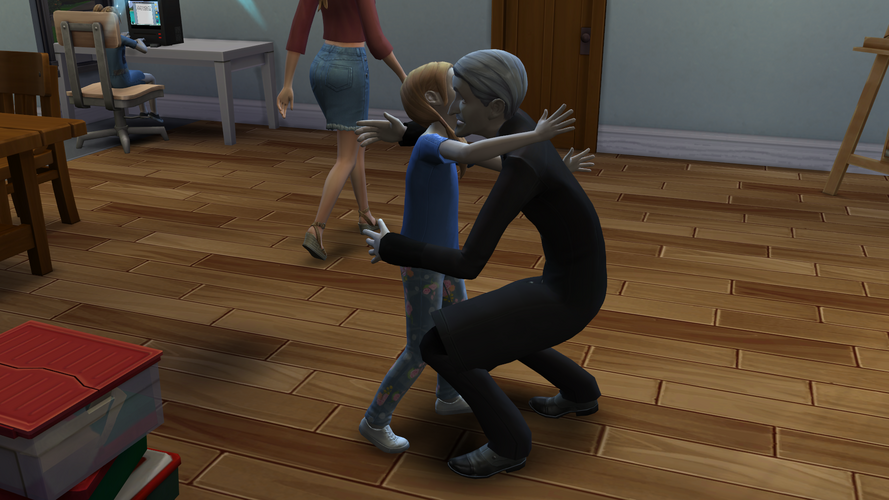 Vlad: I know just how you feel, Scylla. Nobody likes the evil voice. But it did bring your mother into my life – and you too. For that I’m grateful. 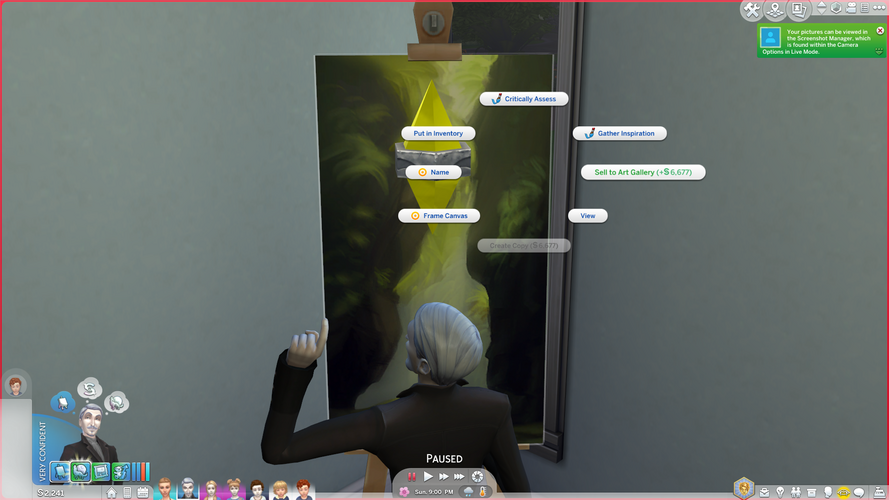 Vlad painted a painting worth 6,677 simoleons! I said that the creative visionary and marketable reward traits would help us to make money. 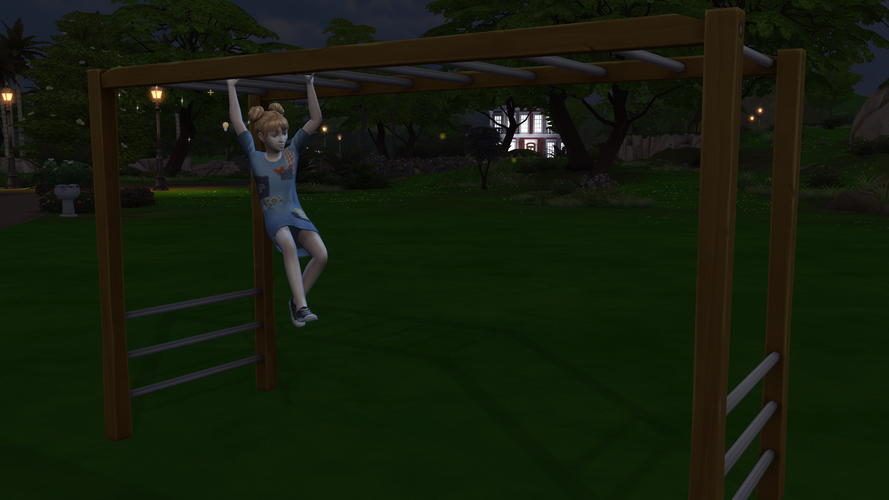 To finish off the chapter, here’s Circe playing on the monkey bars which I generously bought her in order to raise her motor skill.

Vlad: You squandered the money I made from that painting on monkey bars? What good is that to me?

Well not all of it and besides, your childrens’ happiness is meant to be a source of happiness to you.

Vlad: It also seems to be a source of expense to me…