Hello again and welcome back to the Straud legacy! Last time, Vlad and Caly were bad parents, Circe became a toddler and Vlad planted some snap dragon and strawberry seeds in our quest for a dragon fruit. And I should mention that Caly is still pregnant with their third child. 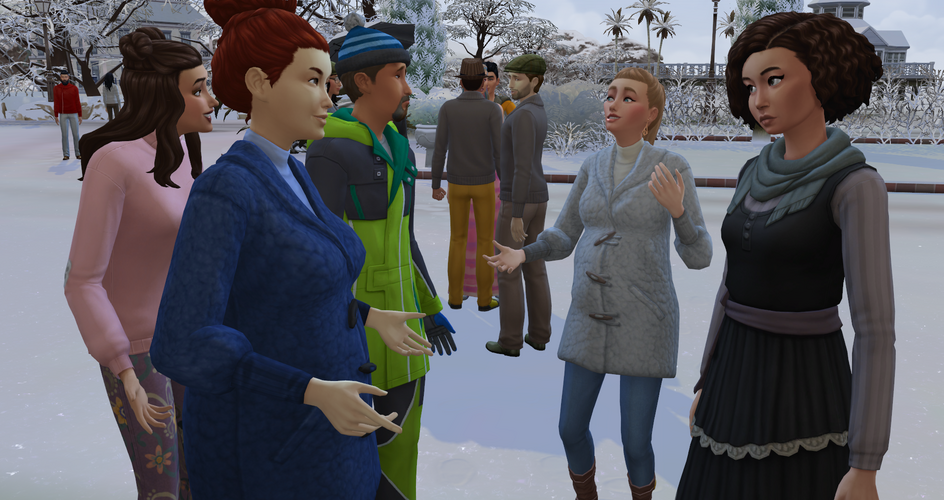 For her aspiration, Caly had to hold a celebrity meet and greet. Obviously, I invited all of the ex-bachelor contestants.

Caly: I hope you aren’t too overwhelmed at finally meeting me. I do sometimes have that effect on people.

Bunny: We’ve met, remember? I was in the bachelor challenge with you.

Morgan: So was I.

Arthur: And I’m your cousin-in-law.

Caly: But you’re all fans, of course. I mean, how could you not be?

Sure, it’s not like they’re just here because you didn’t have enough proper fans to invite or anything. 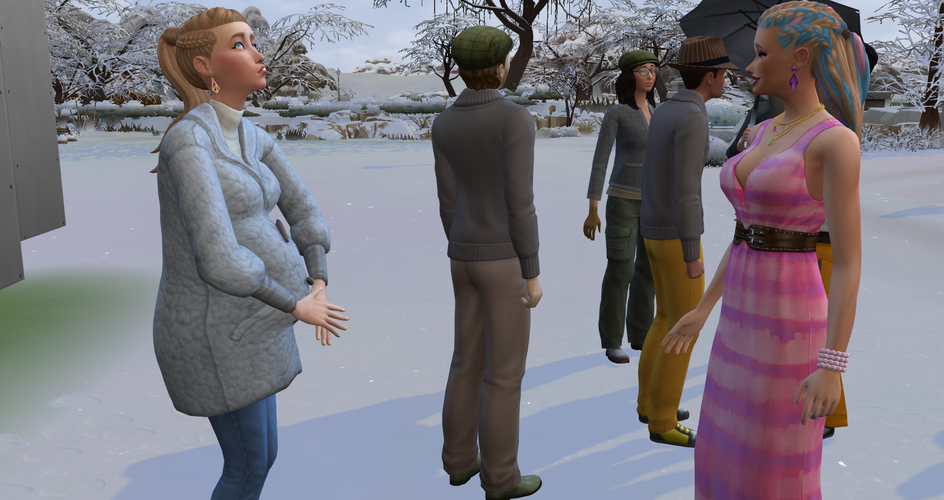 Caly almost wet herself in the middle of the meet and greet. It’s so annoying how pregnant sims have to pee all the time.

Candy: I do hope she pisses herself. Wouldn’t that be funny – I mean unfortunate… For her. 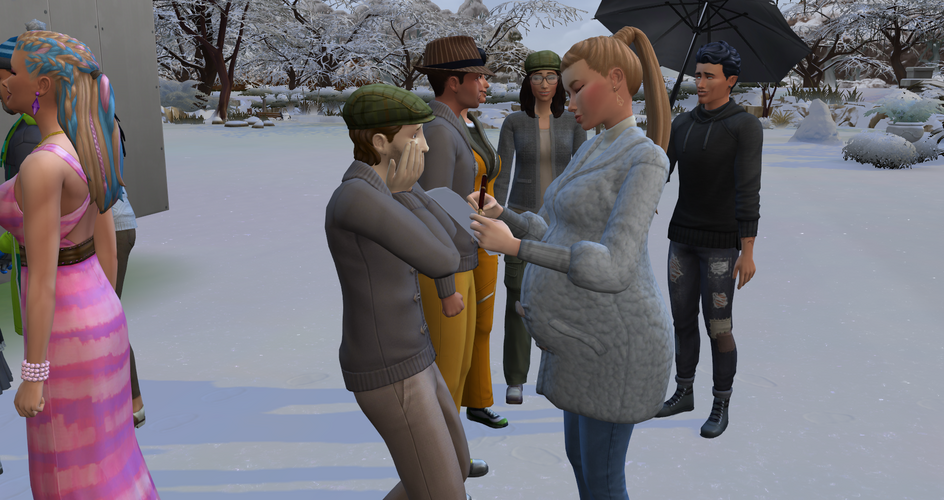 At least Turner seemed excited to get an autograph.

Caly: Here, have a signed picture of me in my latest production. That’s going to be worth a lot of simoleons so take care nobody steals it.

Your one and only ‘production’ was a commercial… For soap! Hardly a feature film.

Turner: I so loved your performance in ‘Salty Suds’ – such emotion, such presence! 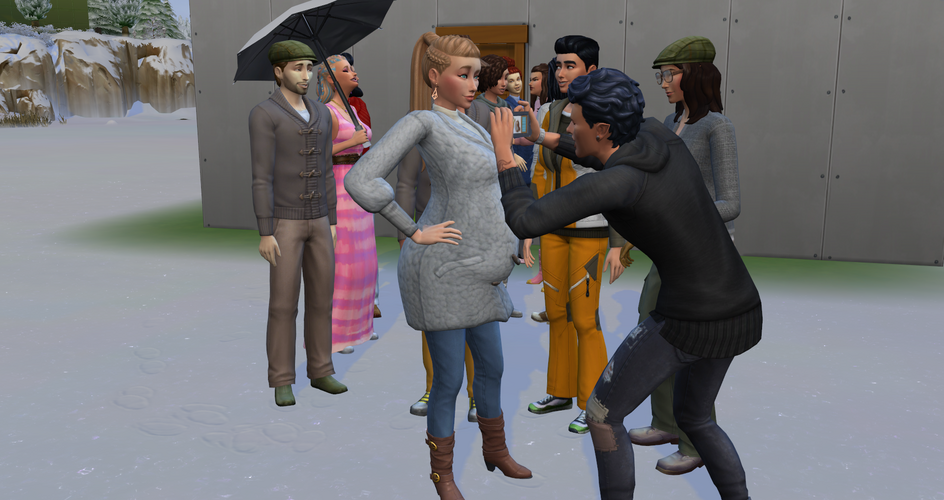 Caly posed for pictures and Roland took pity on her and snapped a few while the other ‘fans’ ignored her.

Caly: Make sure you get a closeup of my face – no no not that side, this side. 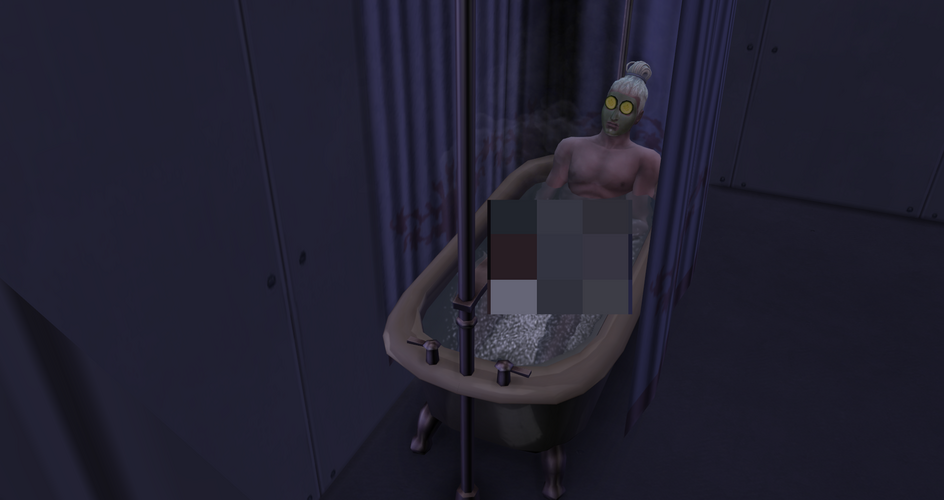 I couldn’t find Keoni anywhere for the longest time so I figured he hadn’t come after all but then I found him relaxing in the bath with a full face mask on!

Keoni: Shhh don’t give me away – I’m hiding. 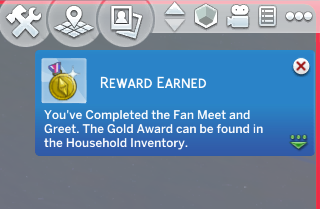 We got a gold medal for the meet and greet – not that it was difficult to earn.

Caly: Well, with me as the star attraction, how could you fail to get a gold medal? 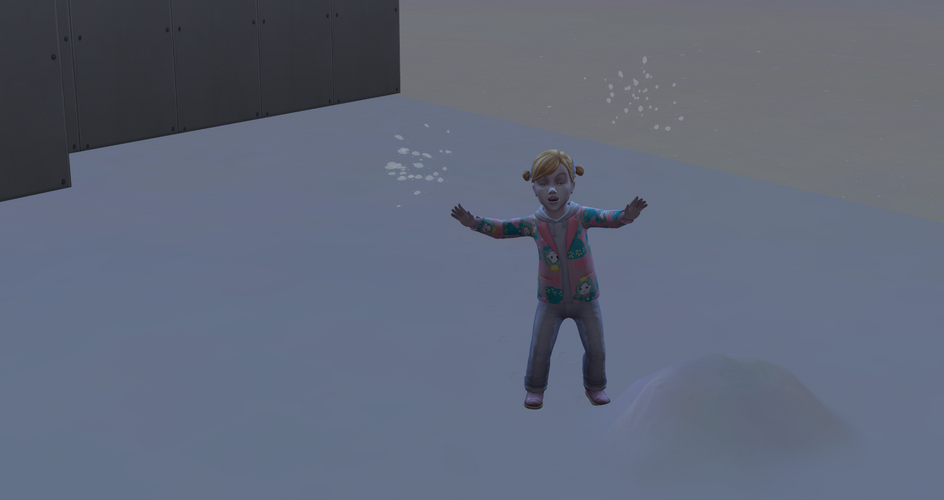 Circe looked very cute playing in the snow so I had to include a screenshot. Something tells me that cute look isn’t going to last though 😉 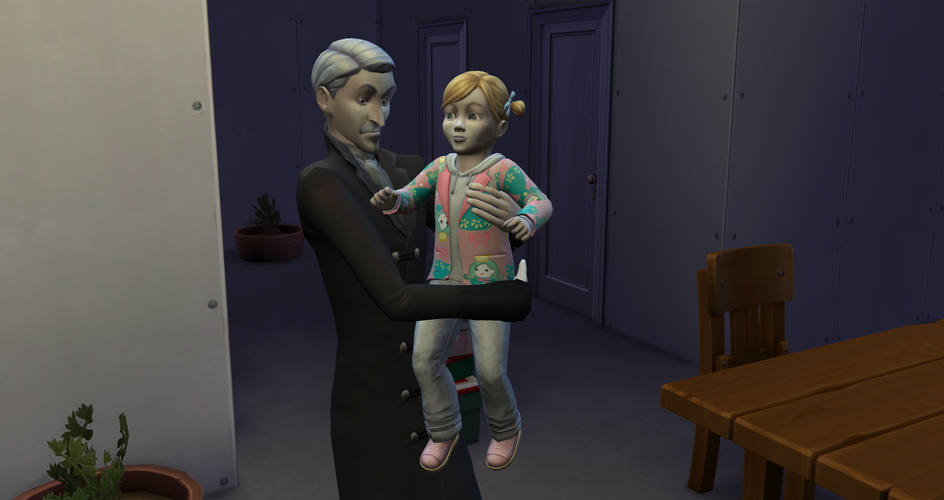 Vlad: Don’t I have a pretty daughter?

She looks like a mini (female) version of you. 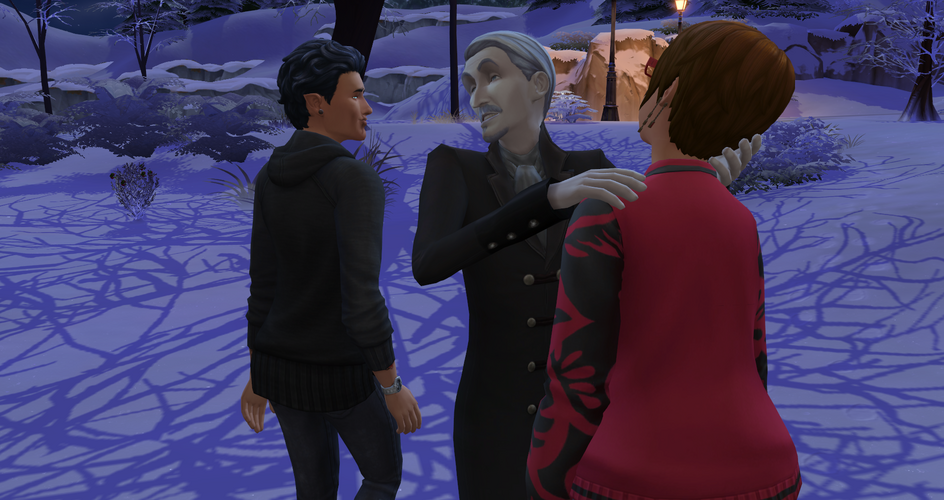 Vlad was draining this hapless townie when Roland happened to pass by.

Vlad: Hello Roland! I hear that Caleb has you on some unnatural vegetarian diet. Fancy joining me for a quick drink?

Roland: Thanks for the offer but I’d better not. Caleb’s making plasma fruit salad for dinner so I need to get home. 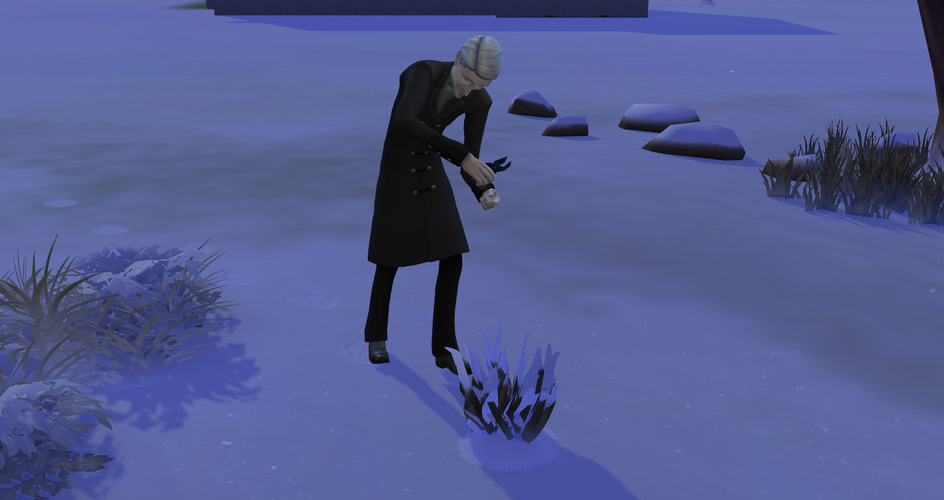 I don’t think you’re going to get a cutting off that bush if you hold the clippers a meter above the plant, Vlad. 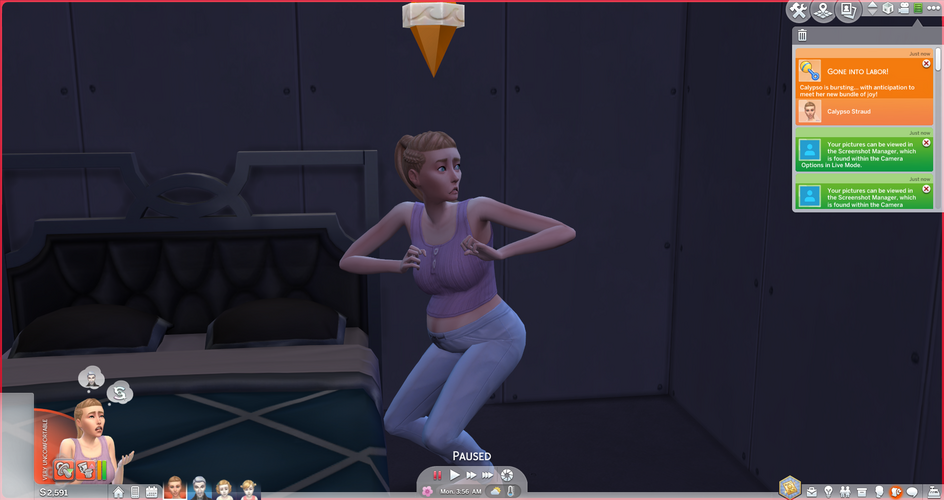 Caly went into labour. She was pretty alarmed about it. It almost looks as though she’s staring at the notification…

Caly: Oh no, I see an orange box – I know what that means! 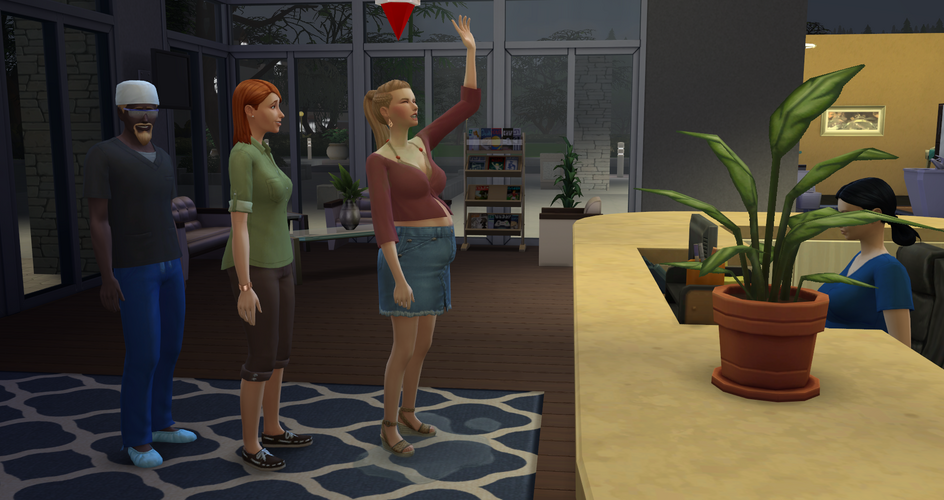 At the hospital this happened.

Caly: Um doctor, can you hurry up? My waters just broke.

You’re not fooling anyone, Caly. There is no such thing as waters breaking in sims, you’ve just pissed yourself. 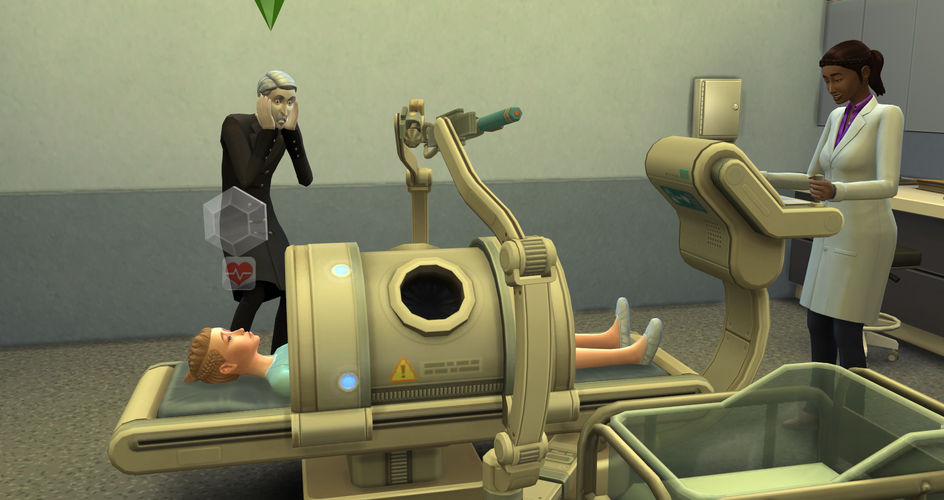 On this occasion, the doctor managed to get the baby out without first extracting any of Caly’s vital organs. 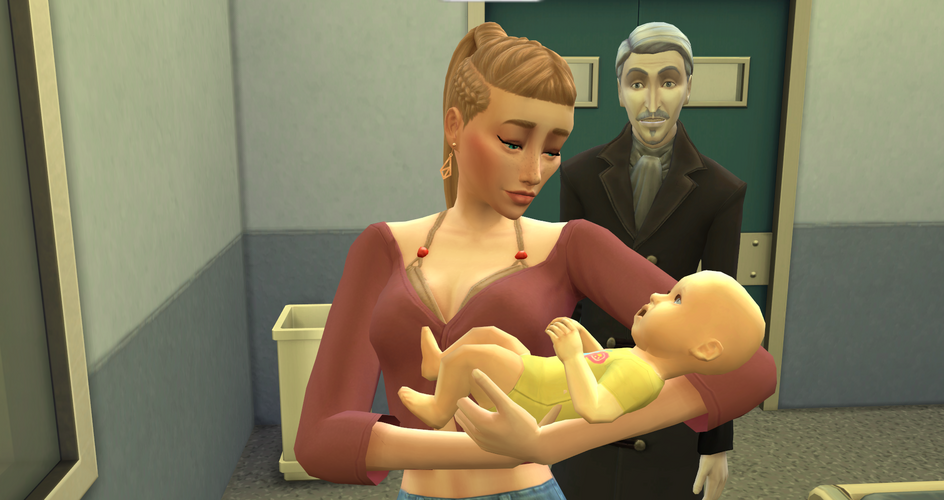 Another baby girl was born. Have to admit that I was disappointed they didn’t have a boy this time. Are you only shooting X-sperm or something, Vlad?

I called the baby Galatea (as suggested by driftwoodpoet and Rendora – thank you guys!) I thought it was appropriate since Calypso was a Nymph and both Circe and Scylla were nymphs (well, Scylla was a nymph before she became a sea monster) and Galatea is the name of a nymph too. In another story from Greek mythology Galatea is the name of a statue which came to life which is also pretty cool.

By the way, I am so proud of myself for managing to position Vlad and Caly right in order to get this screenshot. 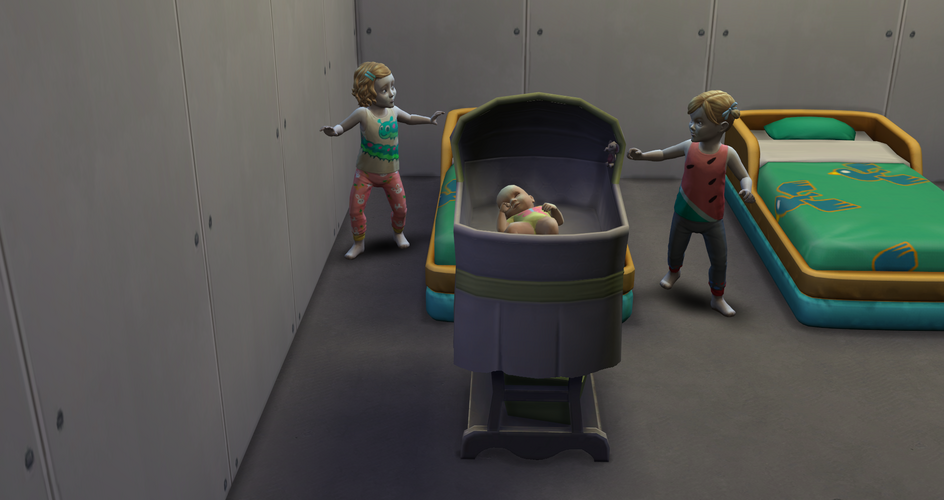 Having returned from the hospital I found Circe and Scylla meeting their new sibling for the first time. 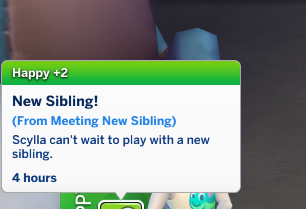 Scylla was happy about it. 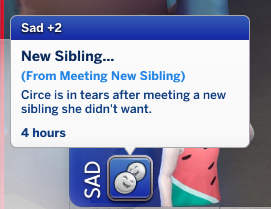 Circe… Not so much! 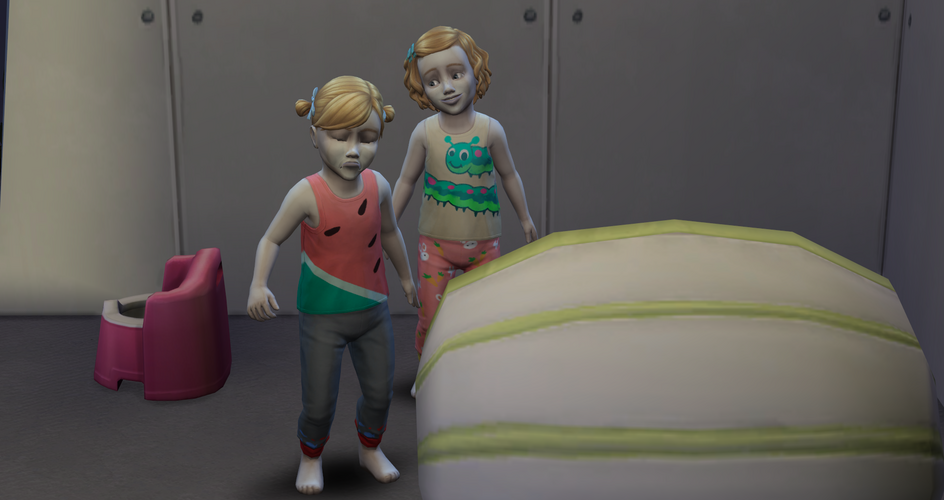 I didn’t want you to have another sister either, Circe. I was hoping you’d get a brother.

Circe: Circe doesn’t want a brother either! Circe wants to be an only child! 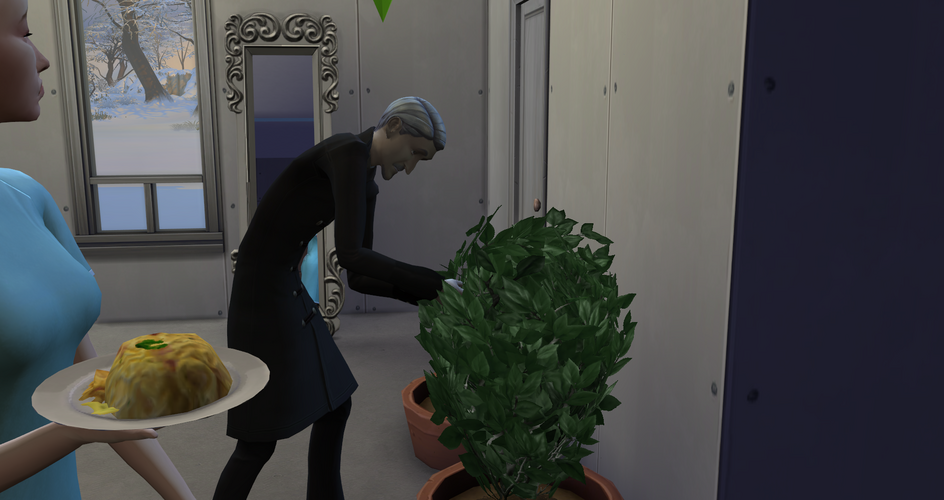 Vlad grafted the cutting of snapdragon onto a strawberry bush. 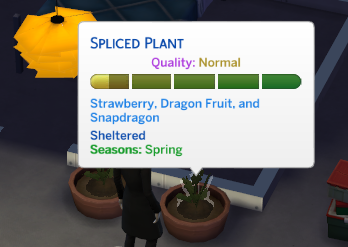 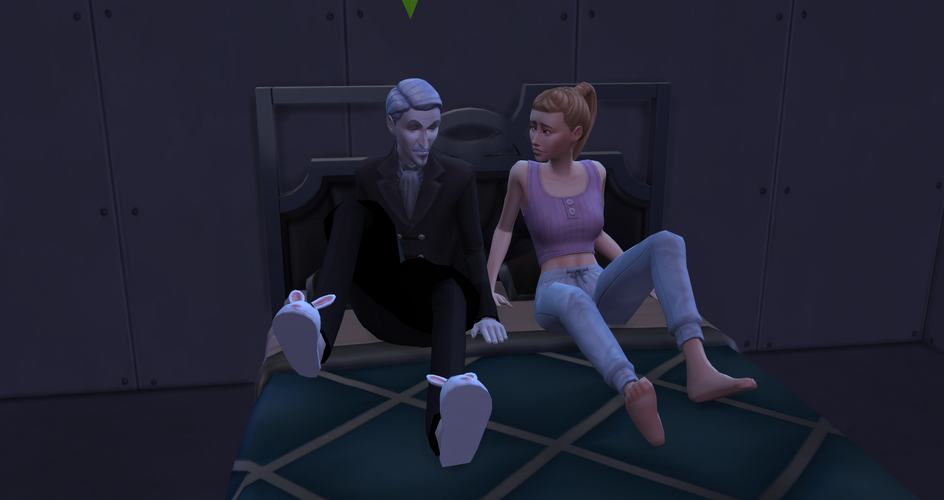 Vlad and Caly tried for a baby for the fourth (and final!) time. 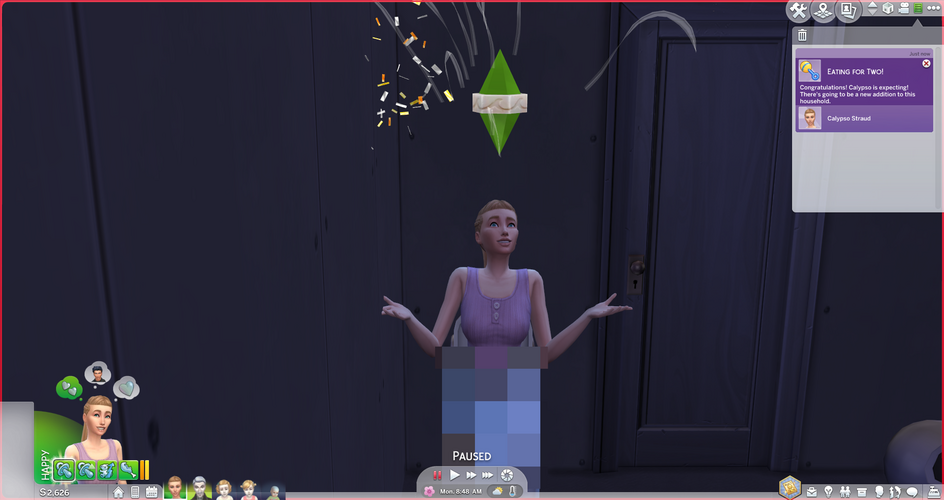 And the pregnancy was confirmed! 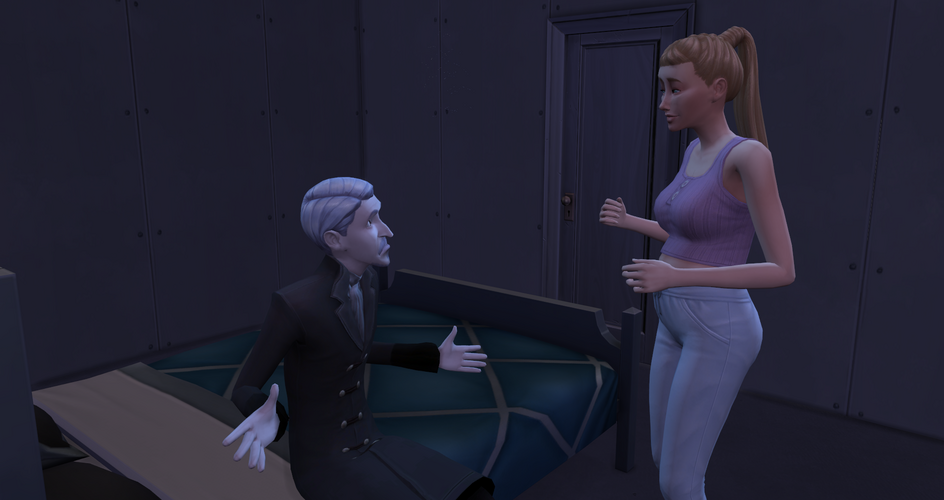 Caly: I’m going to have another baby!

Vlad: And I’m going to have a vasectomy! 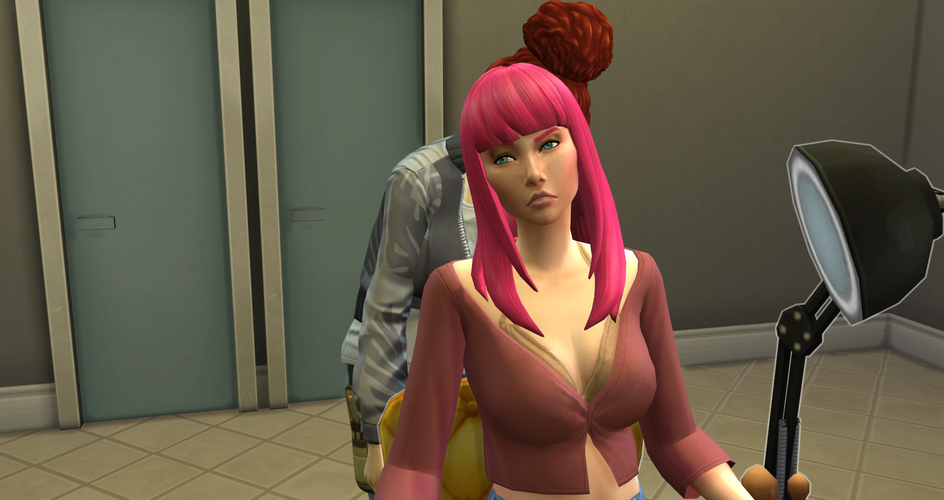 Caly had to go to her acting gig straight after telling Vlad the ‘good’ news.

This hair was a mistake by the hairstylist which was sad because I really love it on Caly. 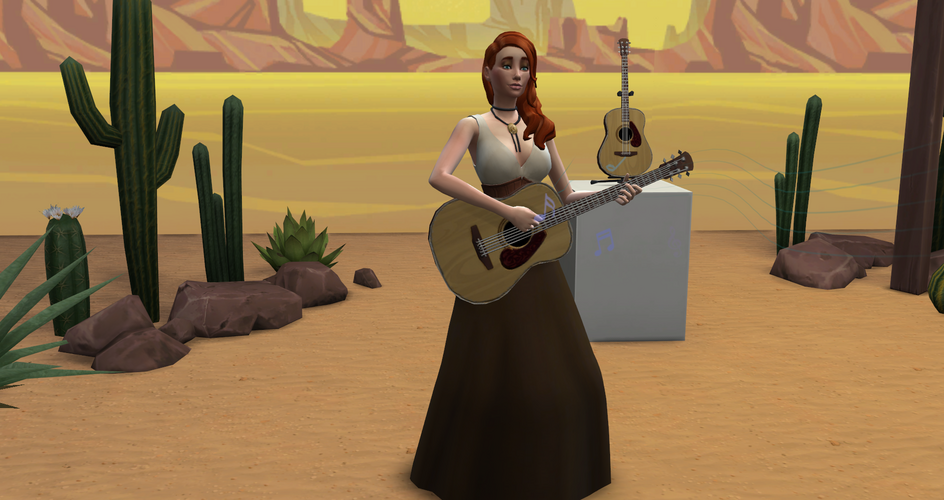 Here’s a shot from the performance, which seemed to be a commercial for a guitar. I don’t know what Caly sounded like because I was playing with sound off, but it can’t have been good because she is only level 2 in guitar skill. So, I doubt anyone will be encouraged to buy that guitar after seeing this advert.

Caly: Anyone would want to play the same guitar as a demi-goddess. Besides, I look good playing it, don’t I?

You look kinda like Ariel with that red hair, actually lol. 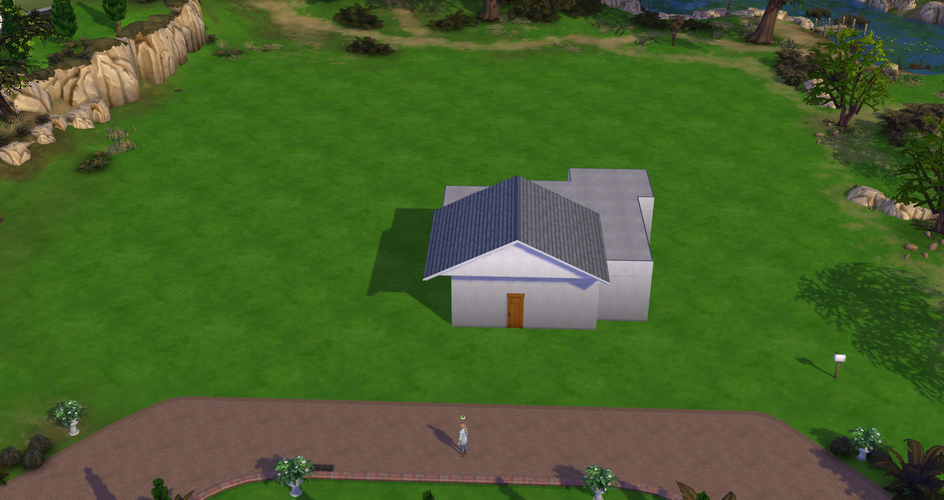 When Caly got back from her gig all the snow had melted! That was sudden. Also no I didn’t fix the weird roof on the house…