Let’s start with a quick recap, shall we? Last chapter, Scylla became a toddler, Caly passed out (a lot), a baby girl called Circe was born and baby #3 was conceived. And that’s pretty much all the important stuff! 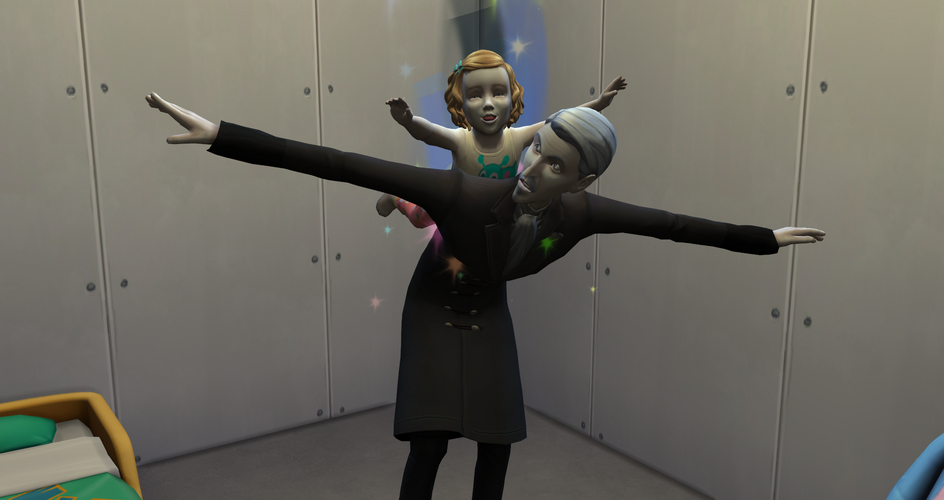 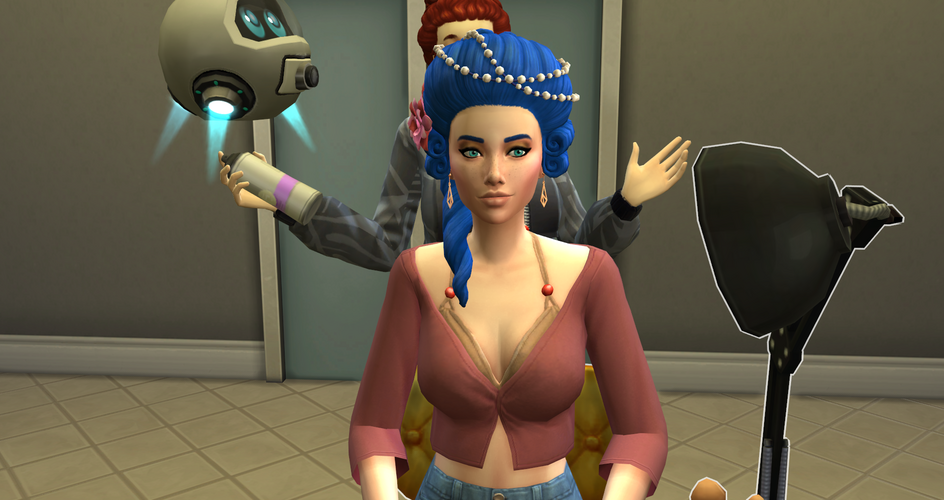 Finally finally finally Caly got to go to her first gig (a  million thanks to TheFreshSims whose mod for the acting career bug made this possible).

Is it just me or does this hairstyle really suit Caly? Apparently it was a mistake by the stylist though so it got replaced with another colour and style (cheese hair lol).

And yes, I did make Caly bring her drone to work. Gotta keep working on that fame! 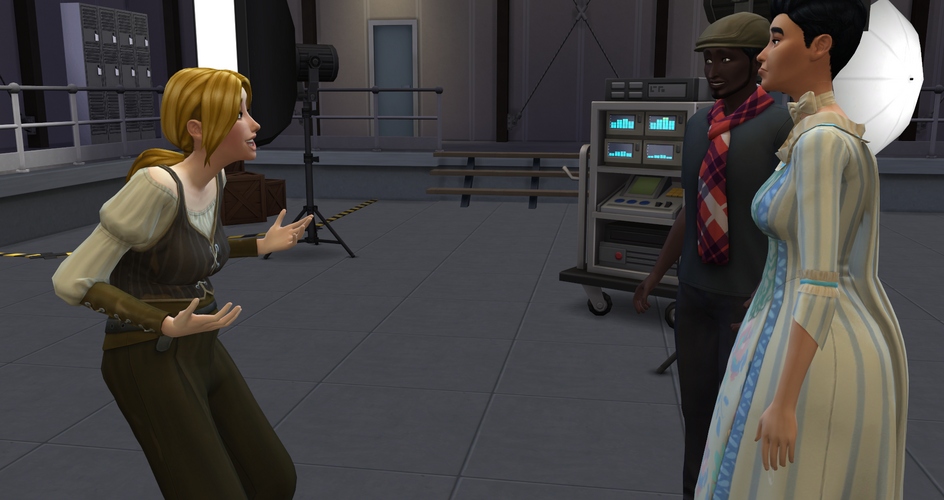 Director: She knows this is just a commercial for soap, right? 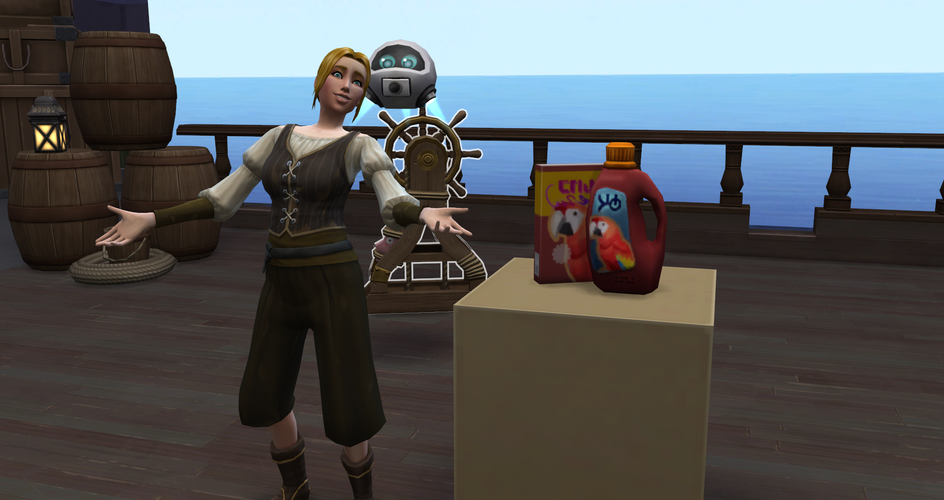 Caly: And that’s why nymphs like me choose Salty Suds!

Director: You’re meant to be a pirate, not a nymph! And will someone get that drone off stage? It’s ruining the shot!

Caly: This man does not recognise true greatness when he sees it. 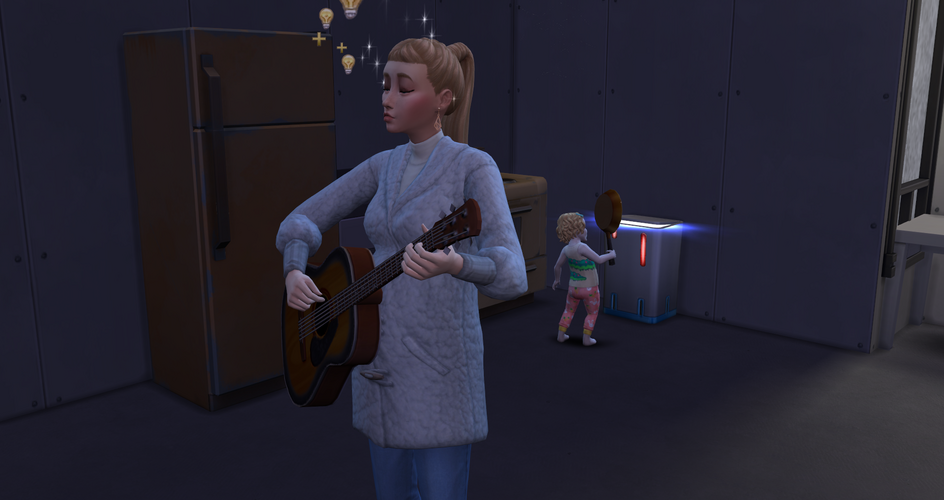 Caly’s next audition was for the ‘making moosic’ gig and she needed level 2 guitar skill for that so I had to buy a guitar for her to practice.

Uh Caly, it looks as though your daughter is in danger of knocking herself out with a frying pan. Maybe you should, you know, supervise her? 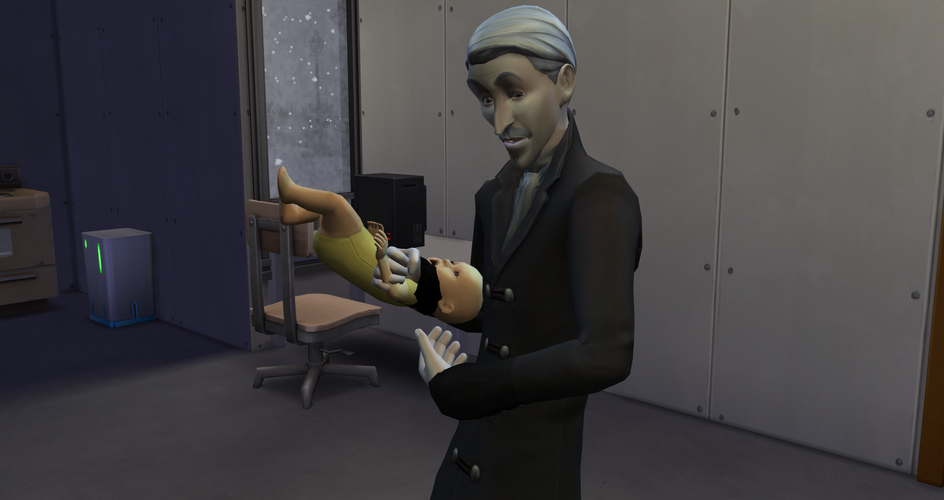 And here is Vlad giving us another example of stellar parenting.

I don’t pretend to be an expert on the correct way to hold a baby but I can tell you right now that that is not it.

Vlad: Don’t be silly, she likes it. See, she’s laughing!

If being dropped on one’s head as a baby is meant to cause impairment of mental functioning, I hate to think what having an arm stuck through one’s head is apt to do. 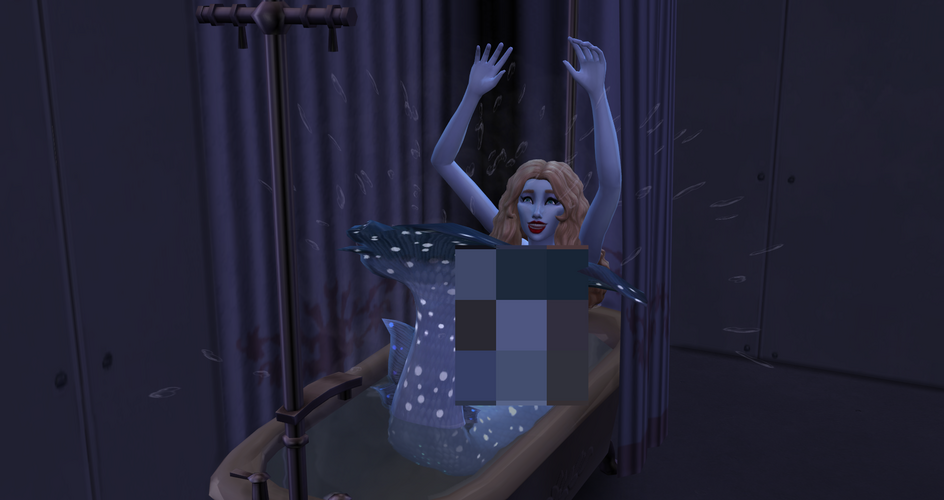 Caly took a bath and I got to see her mermaid form for the first time since leaving the bachelor mansion. I love it so much!

Caly: When are you going to buy me a pool? We nymphs need to swim often.

Um with the house in the state that it is in, a pool wasn’t exactly top priority… 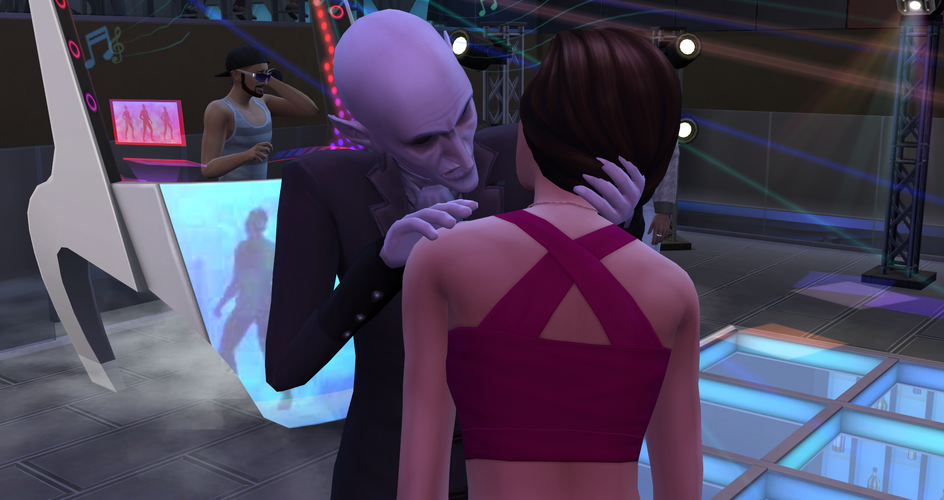 Vlad went to a Windenburg nightclub to hunt and Jade Rosa became his latest victim. 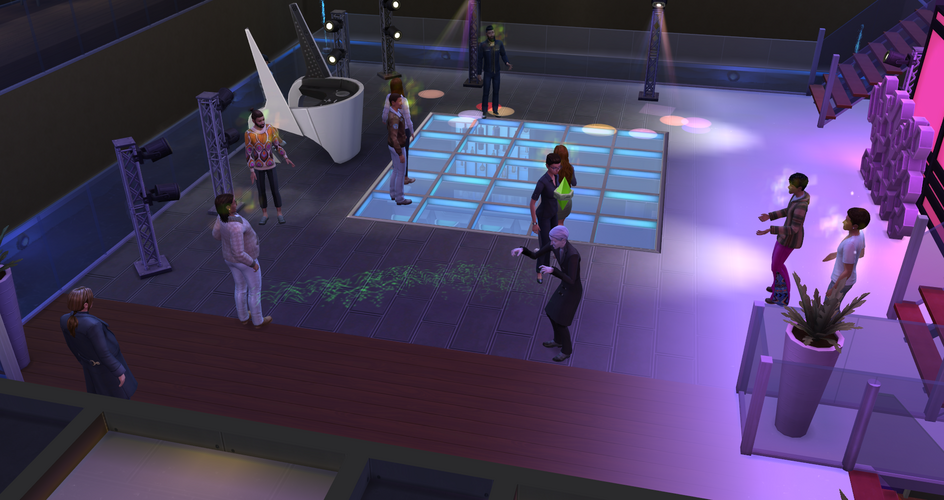 After that, I had him build up his vampire XP by staying in the club for the rest of the night ‘mesmerising’ everyone who entered.

Vlad: You are all of you beneath me! Look at them, helpless to resist my power – how pathetic!

You mean your power to make them stand around talking to themselves? Very impressive and useful… Not. 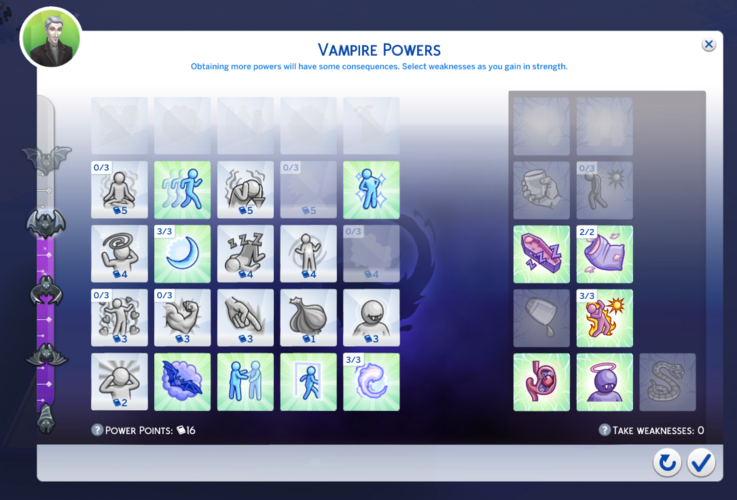 Thanks to that night’s work, Vlad became a master vampire! He doesn’t have to shower anymore which is awesome and he has vampiric speed – again awesome.

I had to pick another weakness for him so I went for the guilty drinker weakness. That might sound like a bad choice but all it does is give your vampire a tense moodlet if they drink from a sim without permission. I’ve got Vlad the ‘carefree’ reward trait (which prevents your sim from getting tense moodlets) so this weakness has precisely zero effect on him. 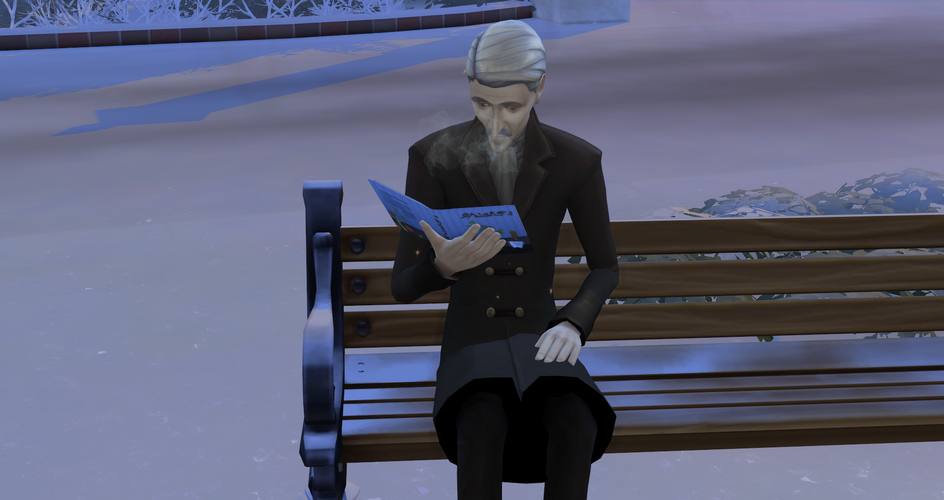 Back at home, Vlad started to read a gardening skill book. I badly want to grow some dragon fruit to help make us some money and you can get dragon fruit by grafting snapdragon with strawberry bush.

I’ve heard that it’s really rare to get a dragon fruit from a grafted strawberry and snapdragon plant so I’d probably have a better chance of getting a dragon fruit at the spice festival but for some reason I haven’t been getting notifications about the City Living festivals. Is anyone else having this problem? It’s possible I’ve just been not seeing the notifications, though.

None of the strawberry or snapdragon plants were harvestable because it was the wrong season and Vlad needed level 4 gardening in order to buy the seasonal spring plant packets.

Also you need level 5 gardening to splice and graft plants so he had to build his gardening skill for that too.

As you can see, he began to burn so I had to get him inside ASAP. 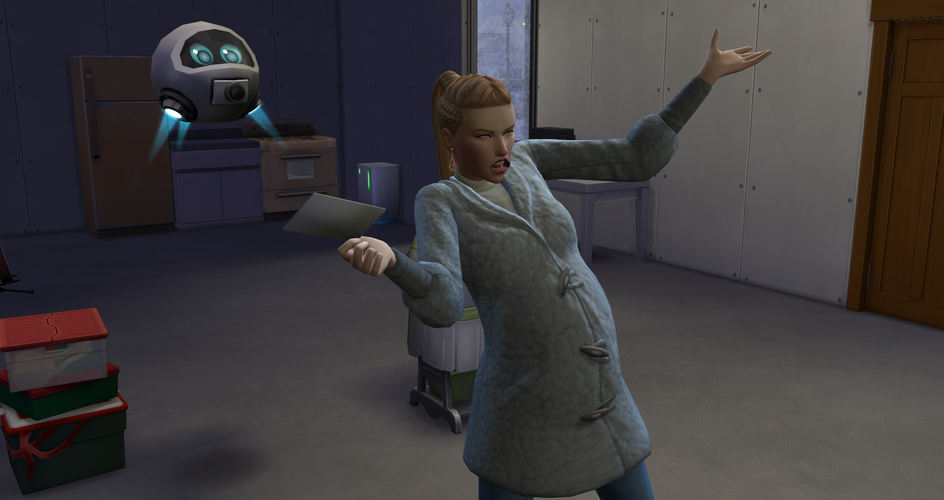 Caly: … And no one shall be safe from the mighty wrath of the great Goddess Calypso. So, kneel down before your rightful Queen and worship her – or burn!

Um bit dramatic. Also, even by your reckoning you’re only a demi-goddess, Caly. 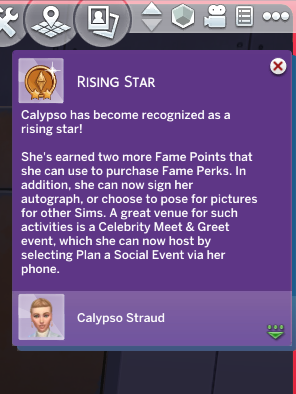 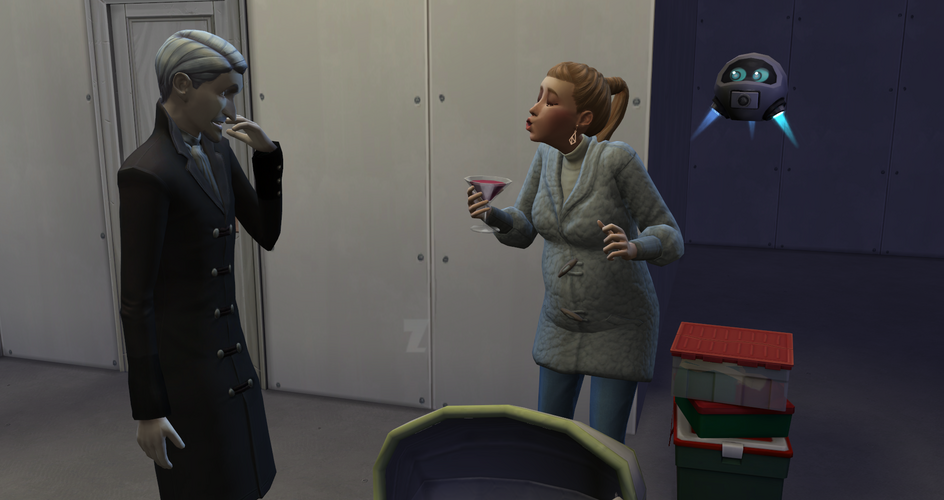 It was New Years Eve and Caly made a toast.

Caly: Here’s to us, Vlad. I’ve been looking for you since I first heard my very first fairytale.

Was it beauty and the beast? 😉 and yes, I did google ‘romantic toasts’ to find that quote.

Vlad: And I still fall for you every day, Caly.

Yes, I got that one off google too.

Unfortunately, Caly ruined the moment by broadcasting it to her thousands of followers. Is nothing private anymore, Caly?

Caly: Not until I have my five stars! 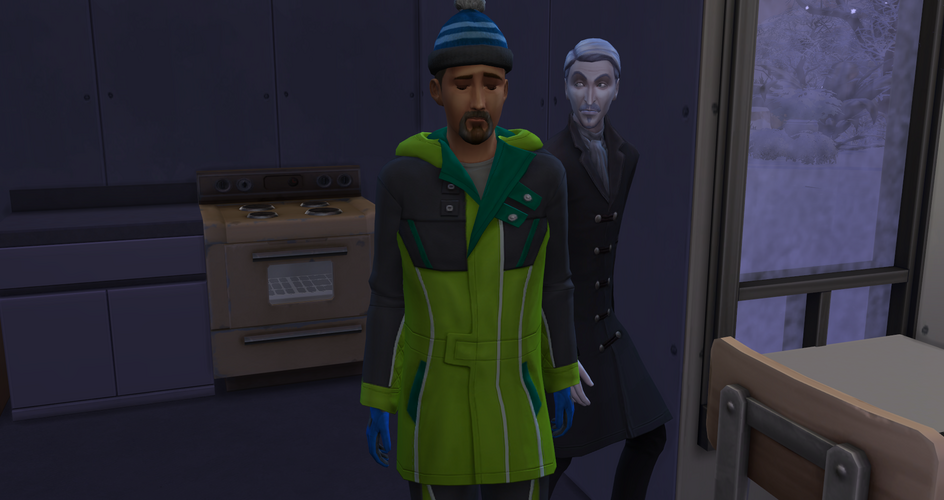 Arthur Climate visited and oh boy I don’t like how Vlad is looking at him.

Arthur: Hi Vlad, thought I’d drop in and see how you and Caly were getting on. What a… Cosy house you’ve got here. 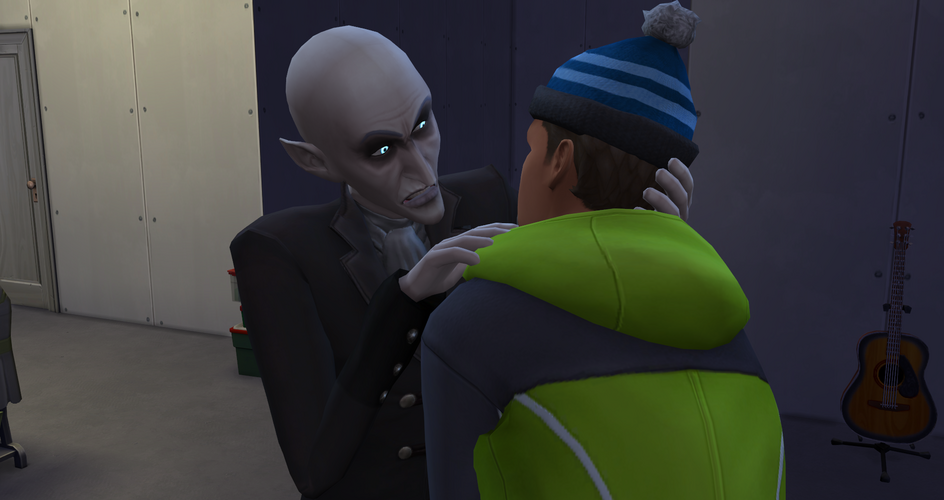 You mean ‘revenge is sweet’?

Vlad: Don’t tell me what I mean! Plasma tastes salty, not sweet. 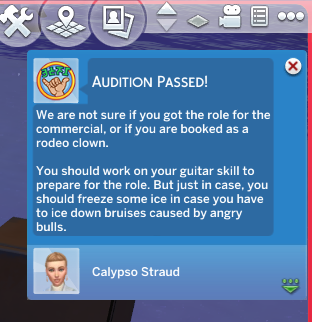 Caly passed her audition for the ‘making moosic’ gig. 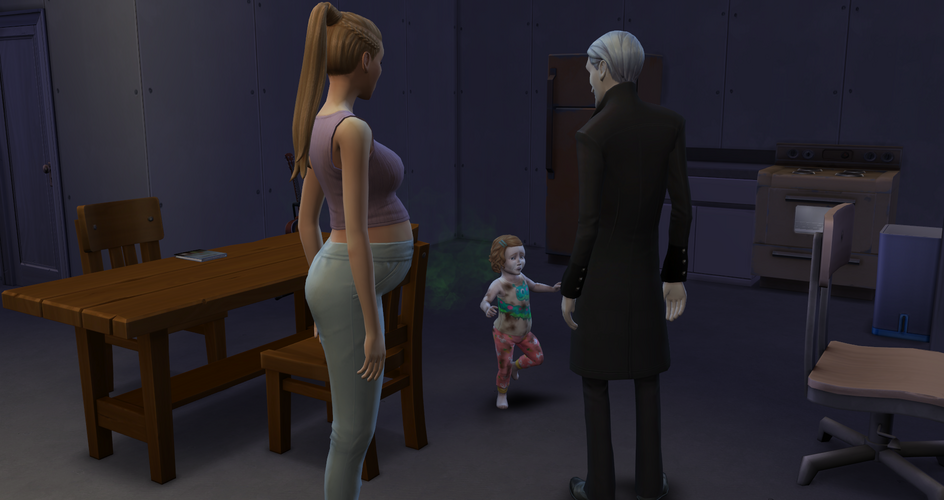 Vlad: Does something smell bad to you? And what are those brown spots all over Scylla?

The smell would be your daughter, and the brown spots would be mud. The cause? Bad parenting!

Caly: Mud? No no, I’m sure she’s always had those brown patches.

What an observant mother.

Caly: I am observant – of myself. 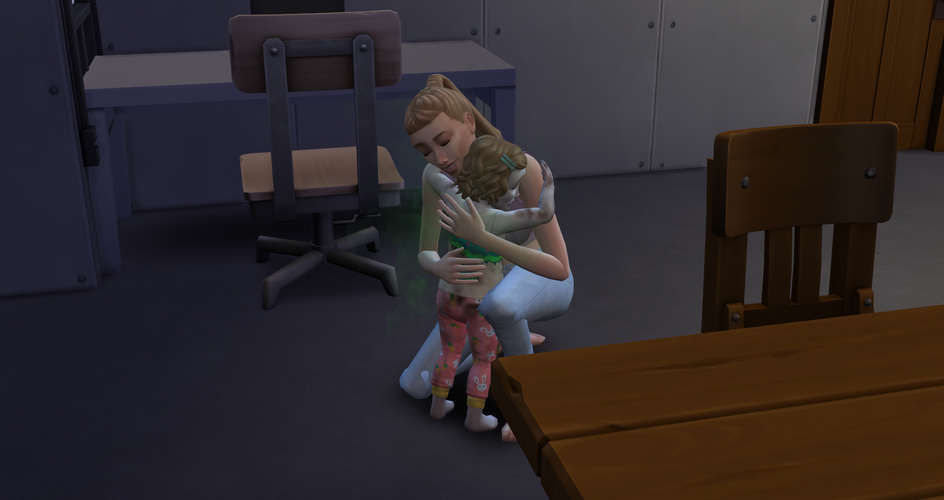 It was New Years Eve and after watching the countdown to midnight Caly hugged Scylla which was cute although come to think of it, Scylla should have been in bed. Bad parenting again! 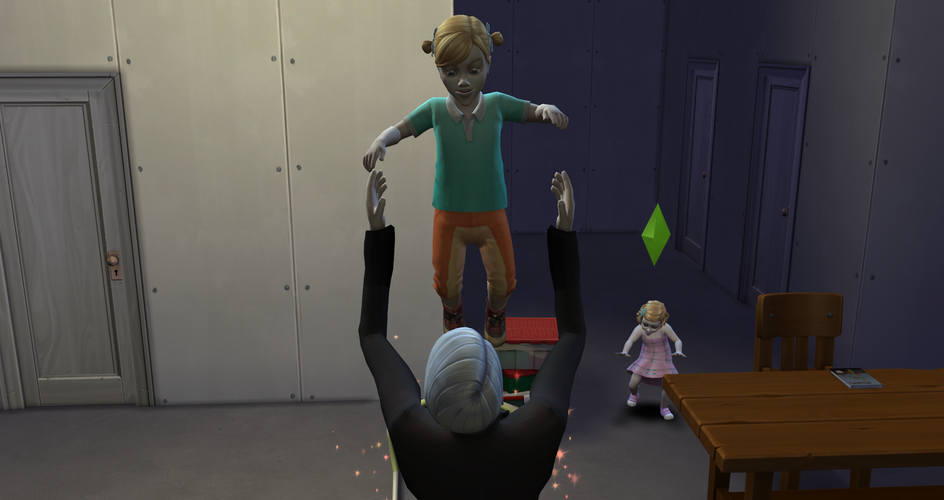 Circe became a toddler! She got the silly trait (I use the in game randomiser, by the way). Here are some CAS shots of her: 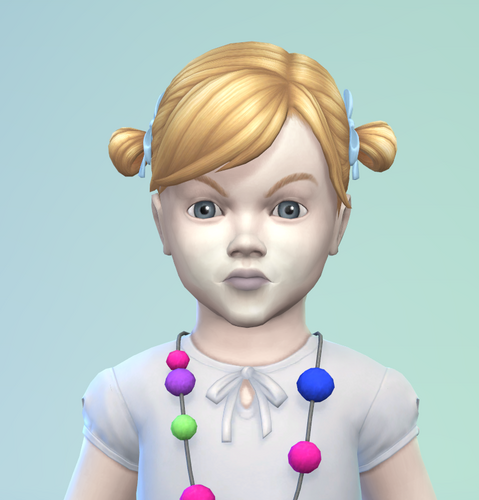 You can already tell that she got Vlad’s eyes, mouth, eyebrows and obviously also his skin colour. 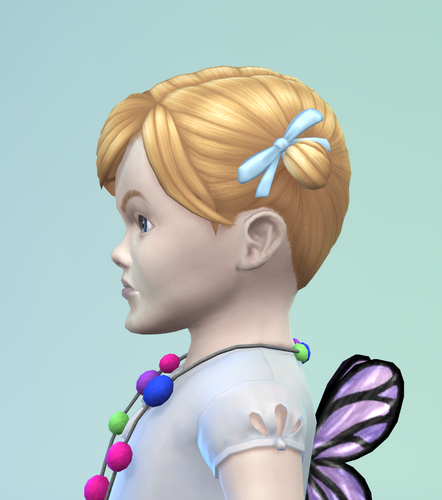 And yup she got his chin too! 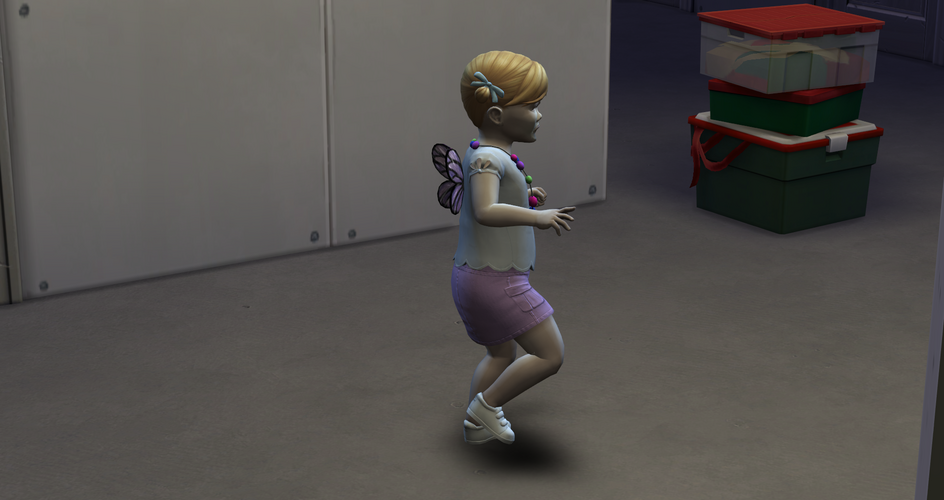 Those wings are so cute! I don’t use this top enough on my toddlers. 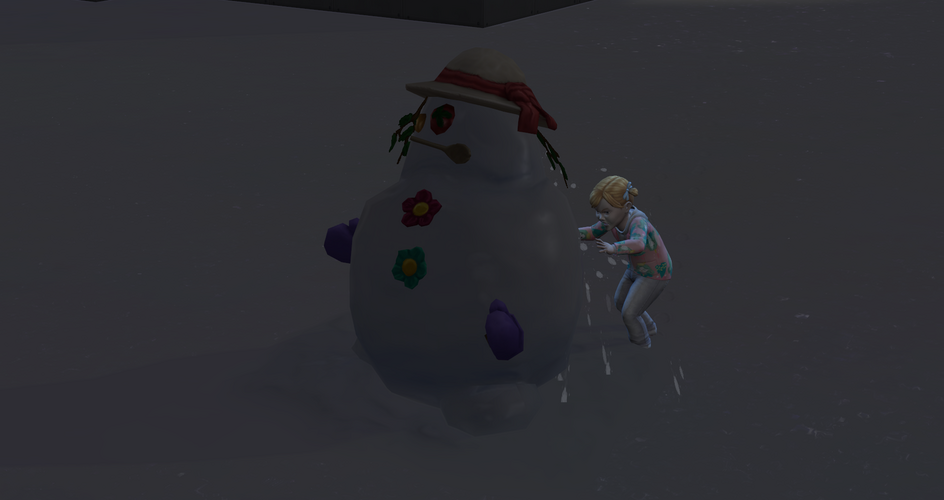 Of course Circe’s first act of toddlerhood was to autonomously go outside and destroy this snow pal.

I do hope that this isn’t an early sign of psychopathy. But, with an evil father and an erratic mother  I wouldn’t be surprised. 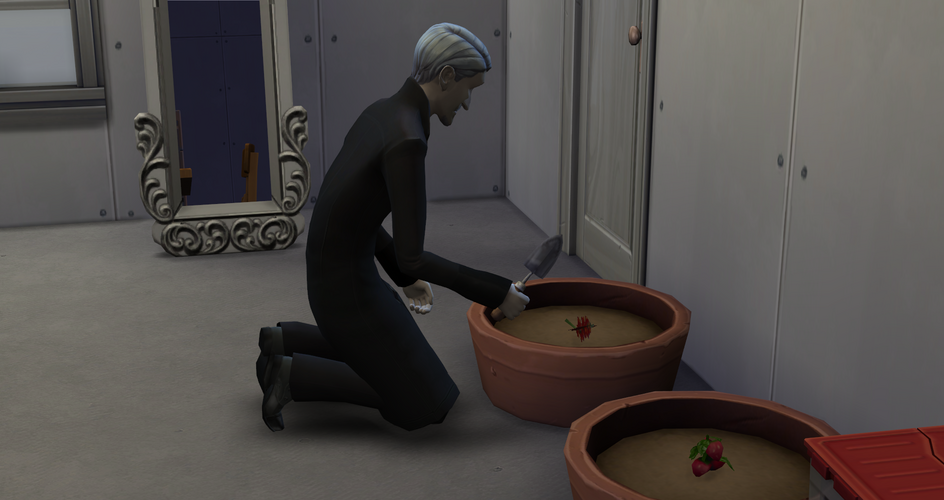 Vlad got level 4 in gardening so he was able to buy the seasonal spring plants seed packets. Then I made him plant some snapdragon and strawberry seeds (there are some more planters in a different part of the house too). 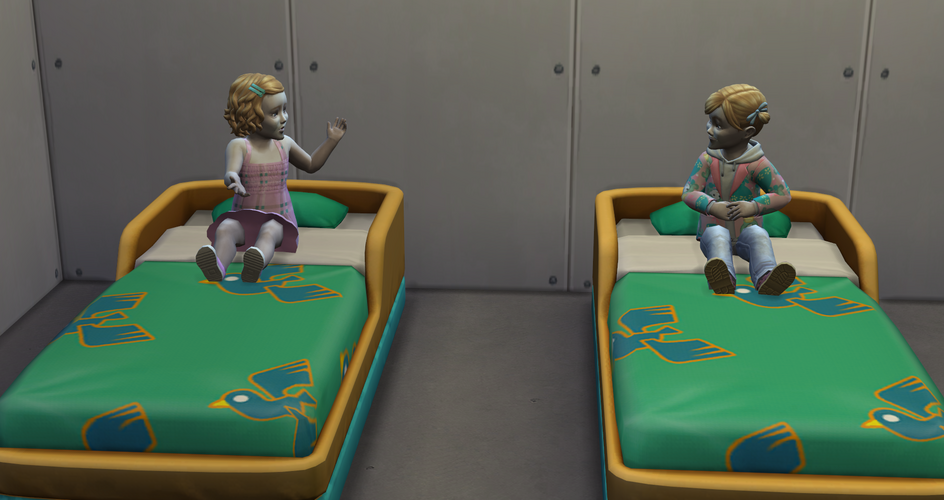 Scylla: … And then I peed all over the floor!

Circe: All this toddler stuff sounds pretty boring. Can I just skip to the child stage already?

I agree Circe, but no you can’t. Sorry! 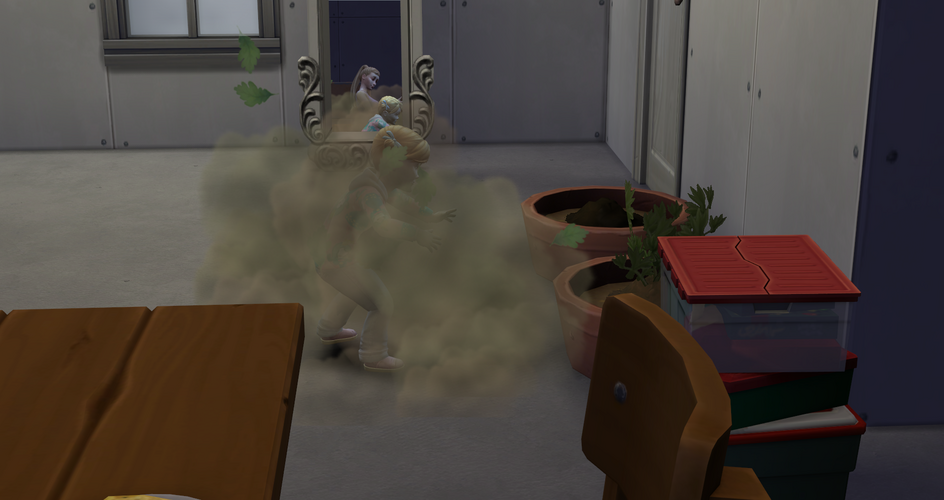 Circe strikes again, this time doing her best to kill my plants. Circe, if those plants are damaged there really will be a murder. 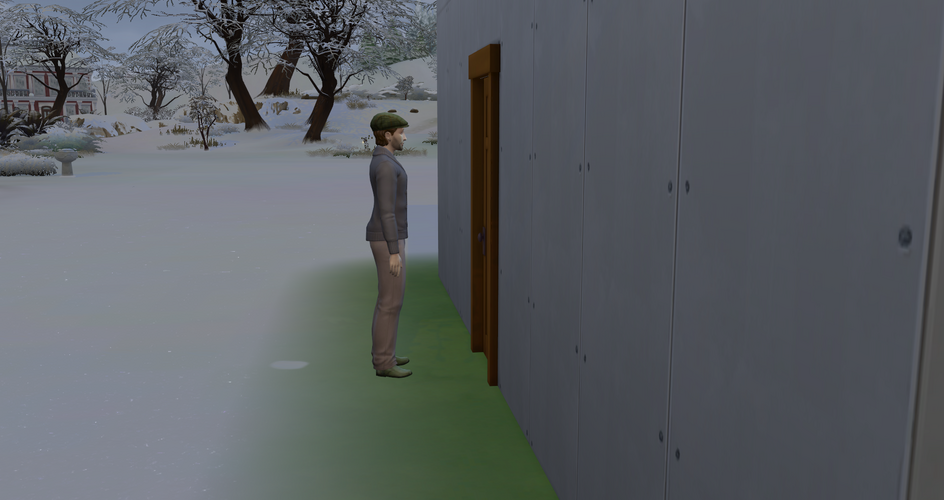 You’d have thought that, what with a wife, two girlfriends and two children, Turner would have his hands full. But he still finds time to visit pretty much every day. Maybe he enjoys being a plasma donor?