Let’s see, what’s happening? Well, last time, Caly and Vlad had their first Winterfest together as a couple, Vlad sparred against the three vampire bachelor ex-contestants, Caly passed an audition and Scylla, being just a baby, largely just lay about in her crib. Oh and Caly is still pregnant with baby #2. 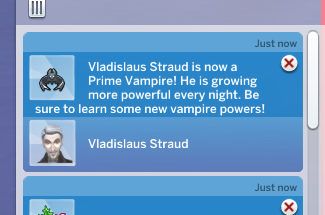 Vlad: That’s nothing to be happy about, I used to be a grand master before you robbed me of all my powers… 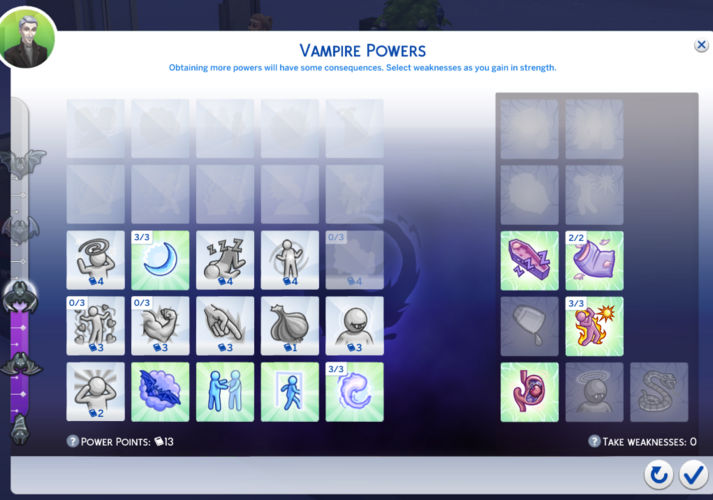 In order to purchase any vampire perks, Vlad had to take 7 weaknesses (yep, his weaknesses are bugged, remember?) now that he is a minor vampire there were 7 weaknesses unlocked that I didn’t mind him having so I selected those and was finally able to get him some powers too. As you can see, he has the level three thin skin weakness which means he will burn very easily in the sun. I don’t think I have ever used the thin skin weakness before – in fact, I usually get my vampires perfect sun resistance asap – so that might be interesting.

On the plus side, I think his power points also glitched out as a result of me cheating him down from a grand master to a fledgling and the result is that he ended up with more vampire power points than he should have as a minor vampire. So I was able to get him quite a few powers already. 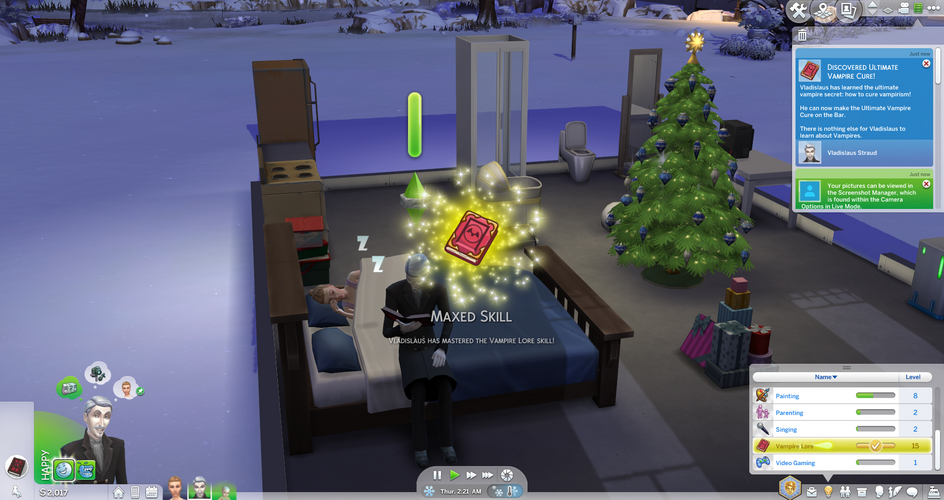 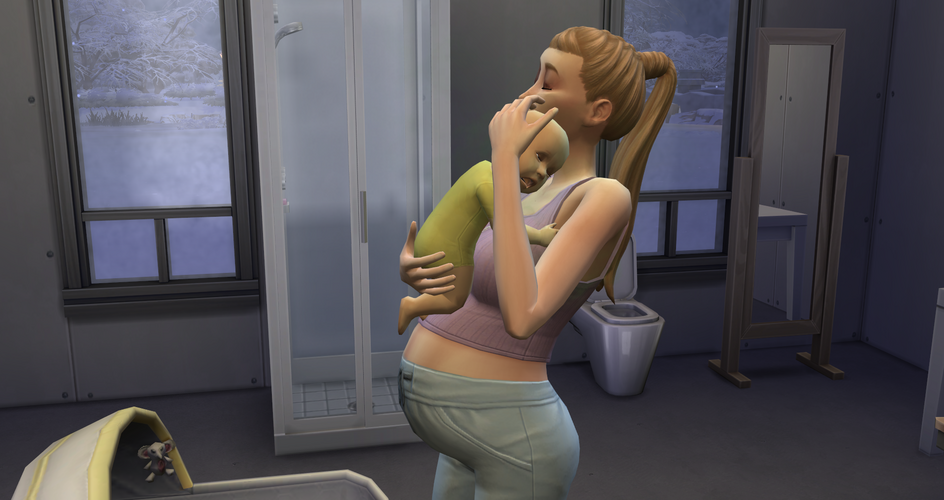 Scylla: I had a nightmare that I looked like daddy!

Nightmare or premonition? Only time will tell. 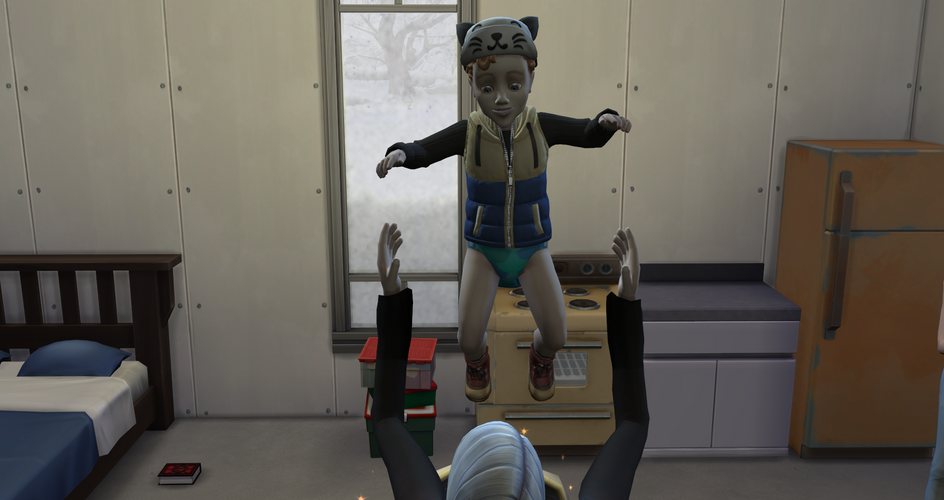 It was Scylla’s birthday, so I aged her up into a toddler. She rolled the charmer trait.

Here are some close-up CAS shots for you: 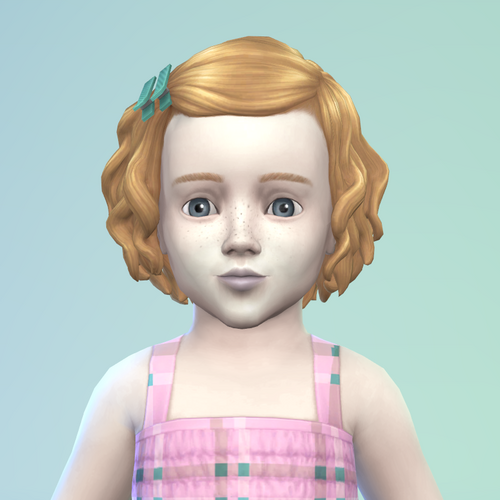 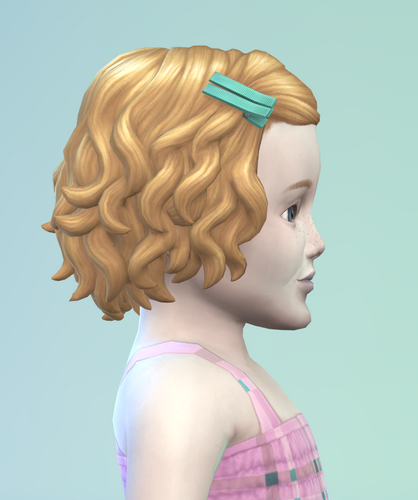 No prizes for guessing where that chin came from 😉 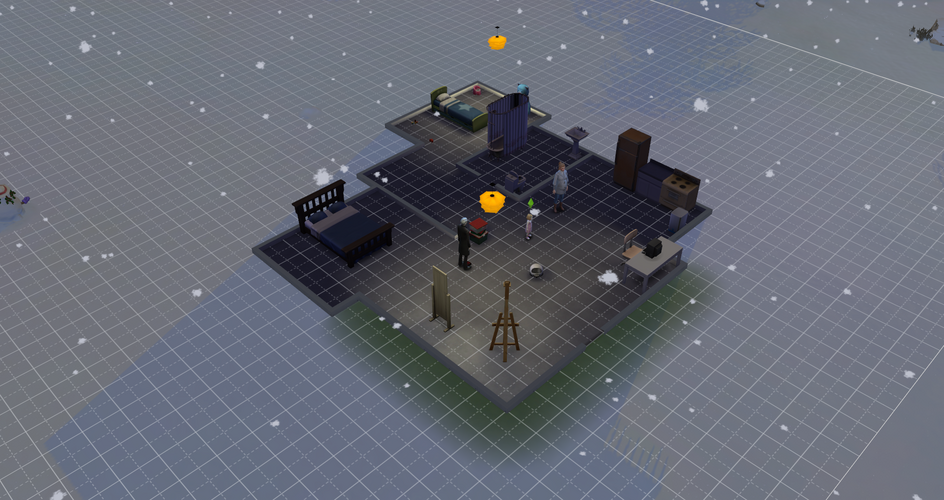 The family had accumulated a fair number of simoleons thanks to Vlad’s painting so I extended the house a bit. Yes, I am aware it looks like shit. Do I care? Meh not really.

Vlad: Speak for yourself, you don’t have to live here…

Oh dear look what happened to the roof! 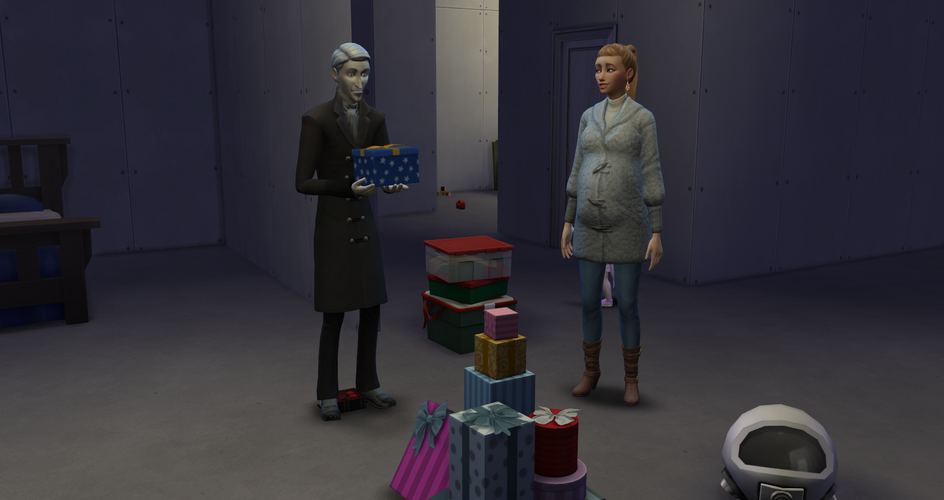 When Father Winter visited the previous night he replenished the present pile, so Vlad and Caly were able to open more gifts.

Caly got a karaoke machine!

Caly: I’ve always wanted a karaoke machine, this is going to be so much fun!

Not so fast Caly, the household funds are at a measly 35 simoleons due to the renovations and that thing is worth 1,895 simoleons. You’d better believe I’m going to sell it instantly. 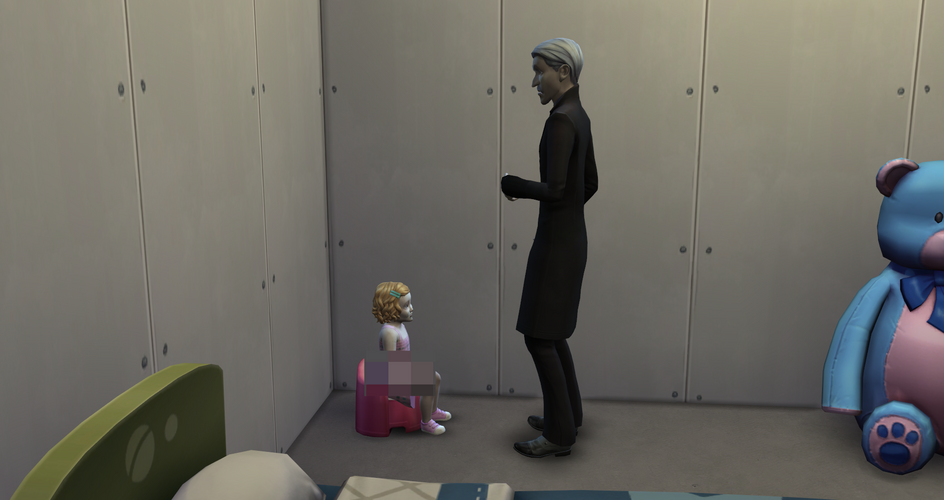 Vlad: So you just sit on the potty and pee.

Are you sure you’re the right person to be potty training Scylla, Vlad? As a vampire you don’t even pee yourself.

Vlad: Don’t be silly, I’ve got this under contr – no, not like that! Pee in the potty, Scylla, IN the potty! 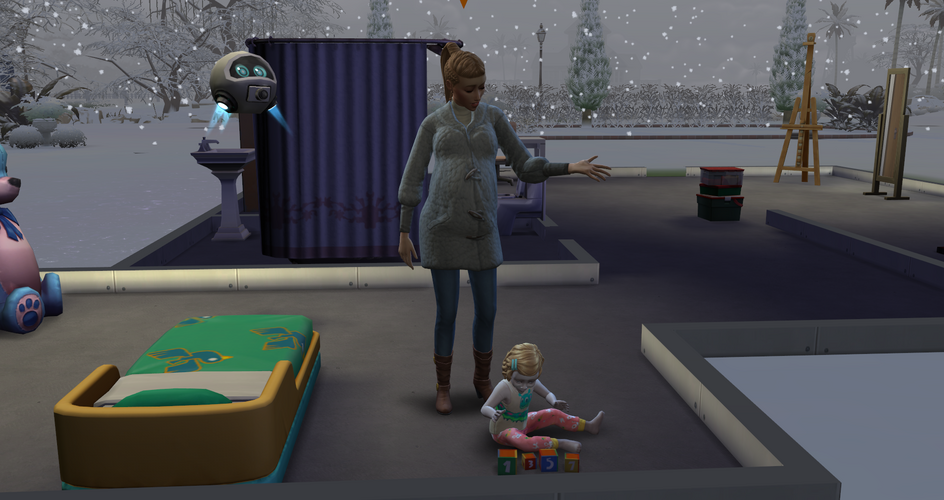 Caly: As you can see, I am not only a famous nymph but also a wonderful mother!

Caly, are you exploiting your infant daughter for views? 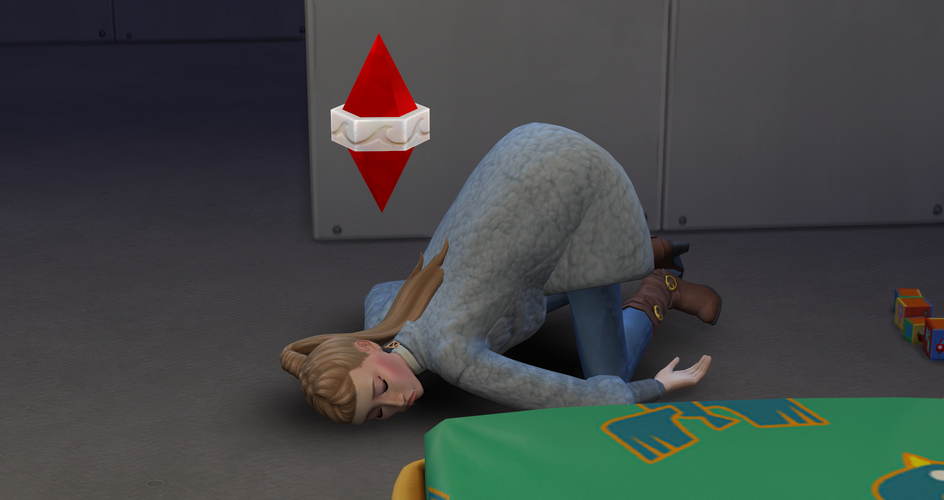 Caly passed out for the first, but (spoiler!) certainly not the last time.

Caly: It’s your fault for making me do all the child care. As a demi-goddess, I should have servants to do these sorts of things!

Look about you, Caly. Does it look like you can afford a servant? Also, Vlad does his fair share of the childcare, especially since he doesn’t have to sleep at night. 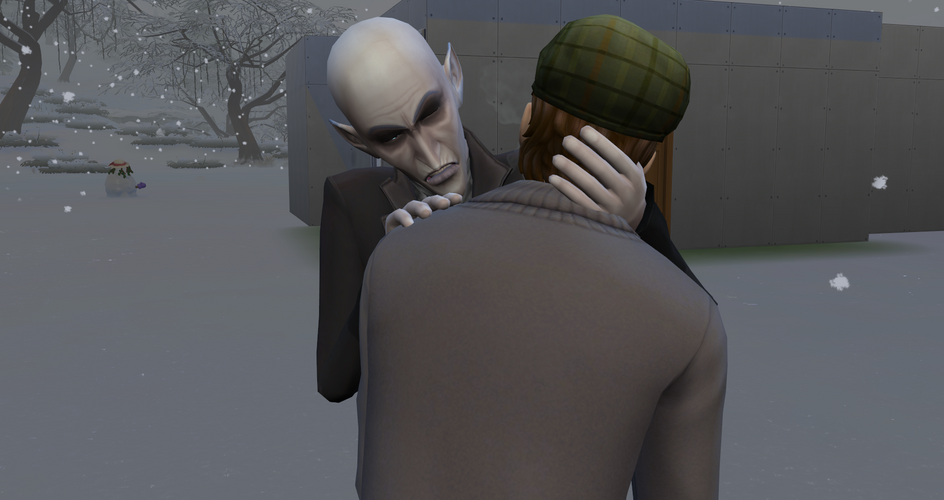 Anyone care to guess who was the unfortunate soul who acted as Vlad’s plasma pack for the afternoon? 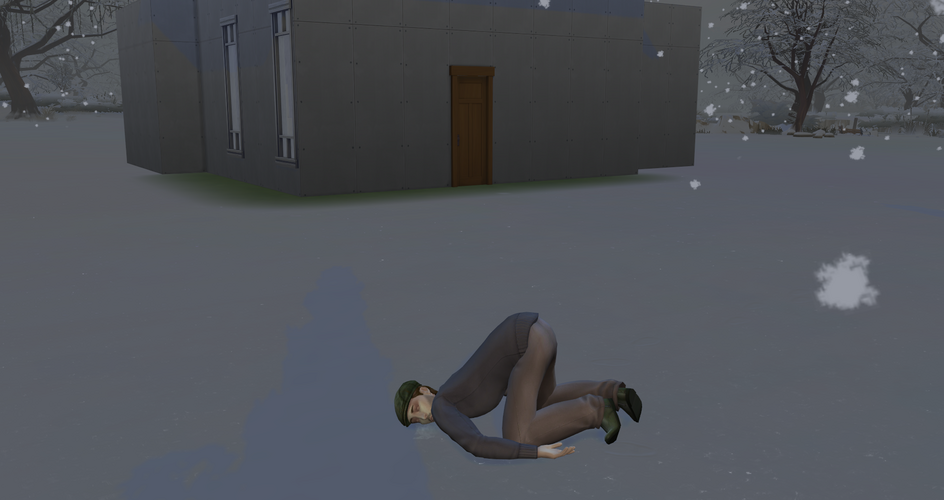 That’s right, it was Turner. Again. He will keep turning up when Vlad is thirsty.

Vlad, how could you leave him lying in the snow like that?

Vlad: What? The snow is soft, I’m sure he’s very comfortable! 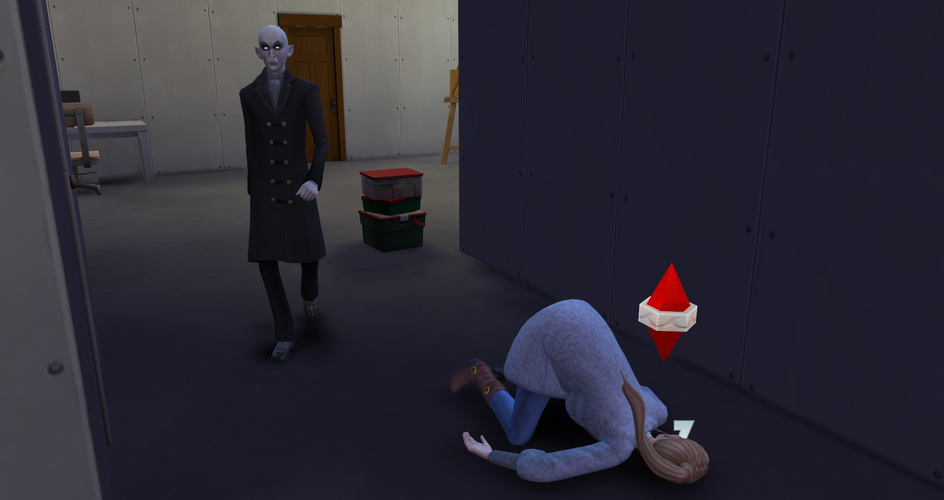 Caly passed out for the second time.

Vlad: Funny place to sleep if you ask me but I’m a vampire so what do I know? Maybe it’s a nymph thing. 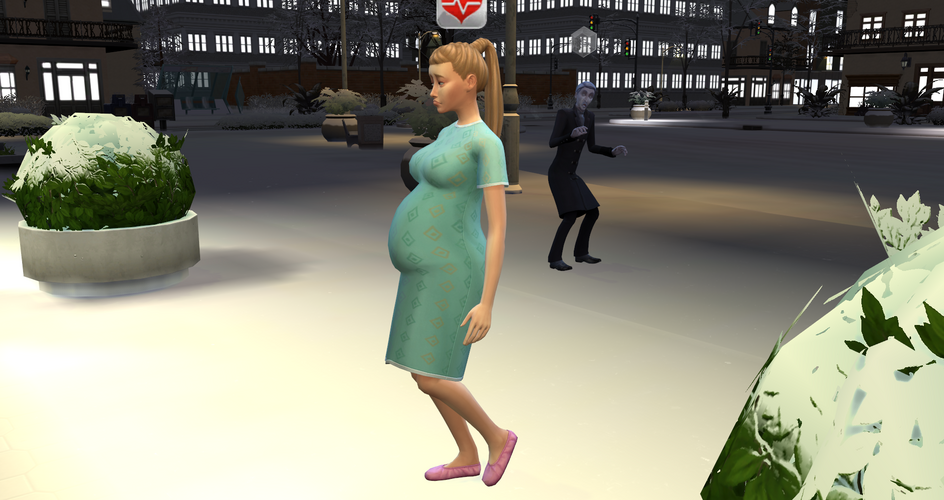 Caly went into labour and this time went to the hospital for the birth.

Vlad:  Oh dear, I’m about to become a father!

Vlad: Yes and I barely know what to do with the first one. 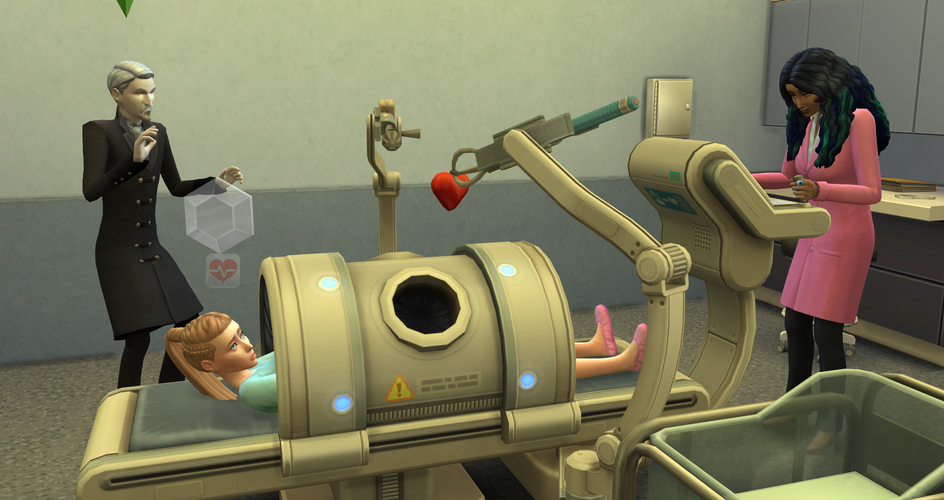 Vlad: What a weird-looking baby.

Vlad: You put my wife’s plasma pump back inside her body this instant, she needs that!

Doctor: Not to worry, this happens all the time. Please don’t sue…

Ok but how do you miss the baby so completely? This doctor needs to go back to medical school if they think that babies grow in the chest.

Does anyone else think that the birthing machine is like one of those arcade machines where you have to grab a toy with a metal claw? 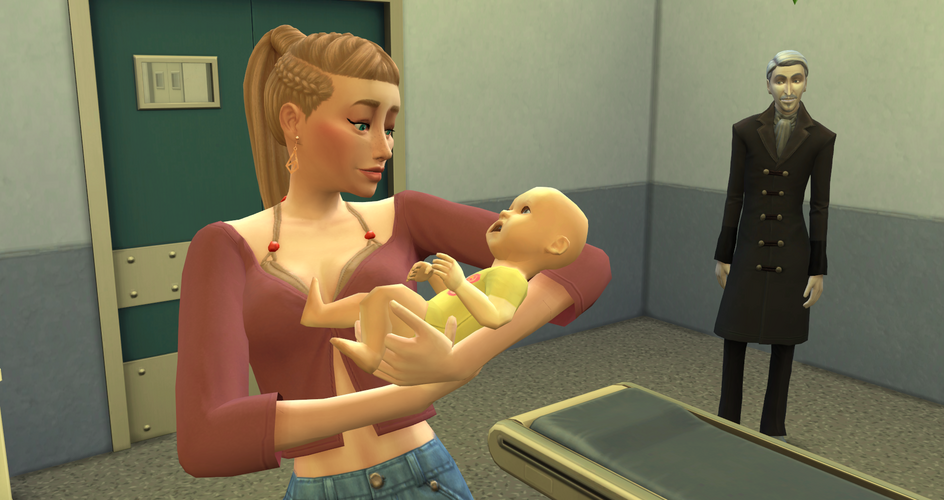 A baby girl was born! I called her Circe – no, not like in Game of Thrones – she’s named after the nymph from Greek mythology. Didn’t both Calypso and Circe sleep with Odysseus? Hmm that makes things a bit weird lol. If Caly and Vlad ever have a son they’d better not call him Odysseus. 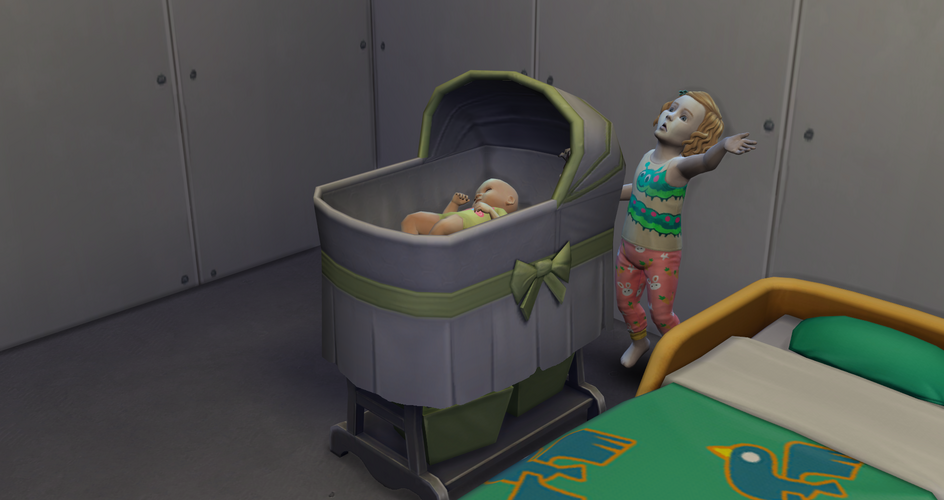 Scylla was understandably perturbed by the sudden teleportation of a crib into her room.

Scylla: Hey, this is my room, get your own! 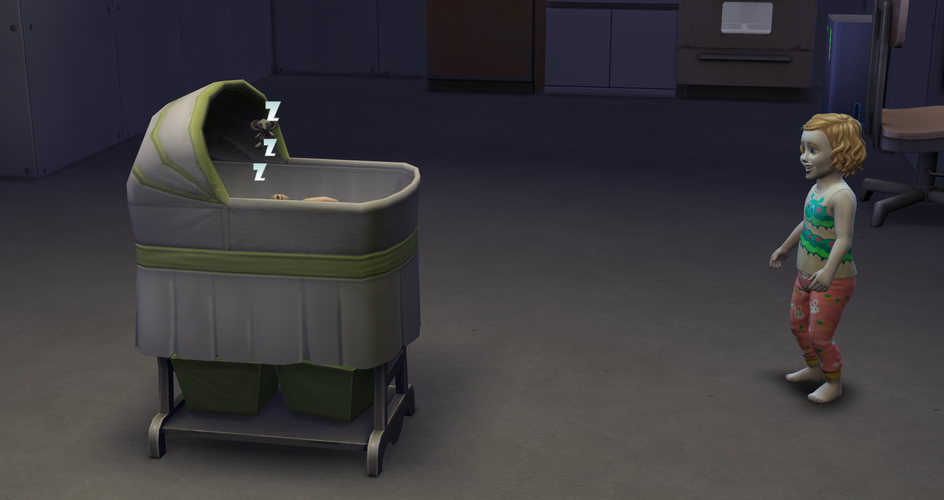 After I had moved Circe’s crib into the ‘hall’ area, Scylla appeared to be more favourably inclined towards her new sister.

Scylla: Is it a baby doll? Can I play with it?

Correct about the baby part, wrong about the doll part. You can play with her when she’s older. 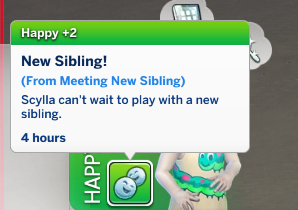 See, Scylla really was happy to have a sibling after all! 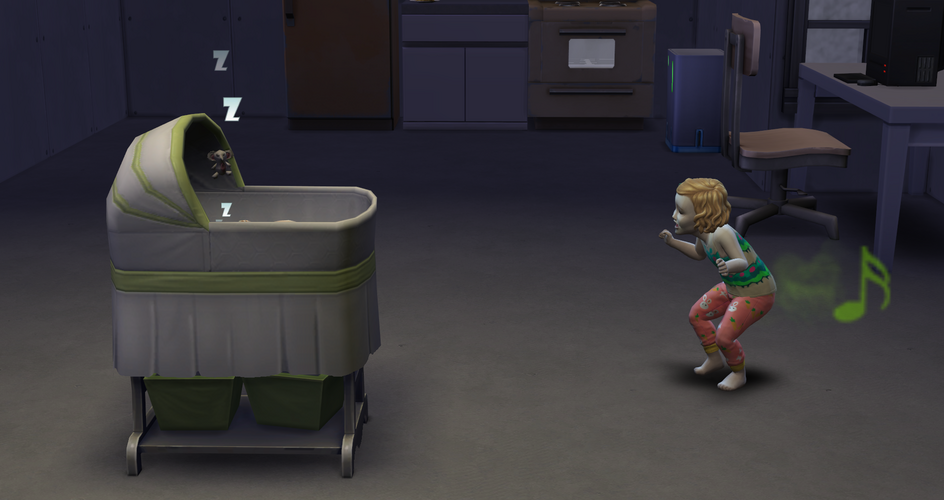 Scylla had to go and ruin what might have been a tender first meeting with her new sibling by letting one rip. Don’t pollute the baby’s air, Scylla… 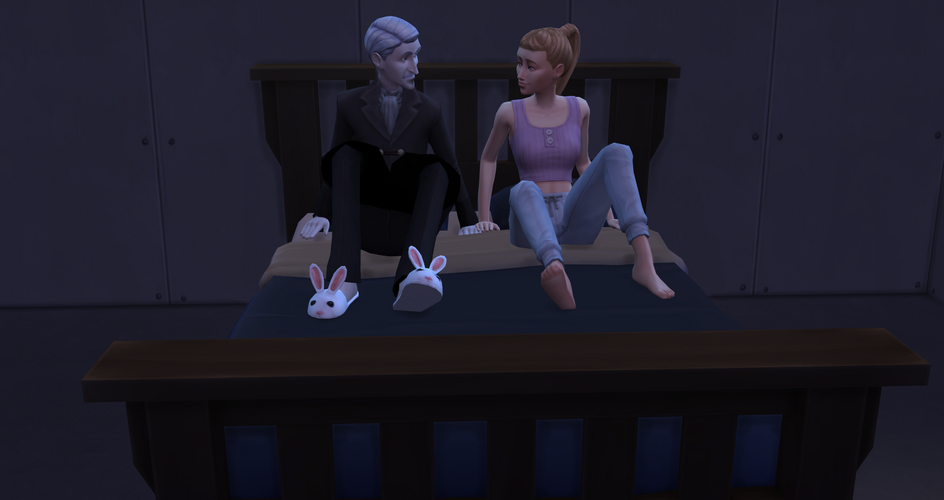 What did I do next? Of course I made Vlad and Caly try for a baby. Caly does want at least four children (though I can’t see  myself making them have more than that) and I want to get them all born close together for the heir poll (yes I probably will decide the next heir by an heir poll). 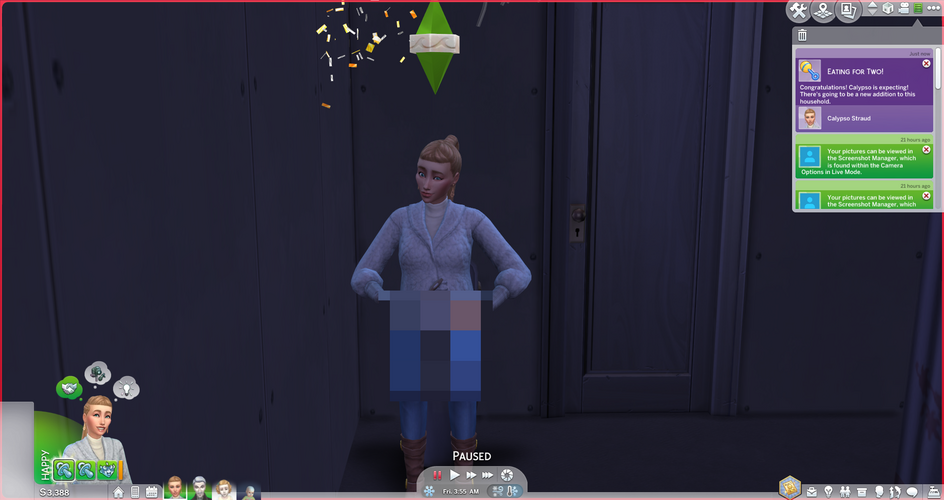 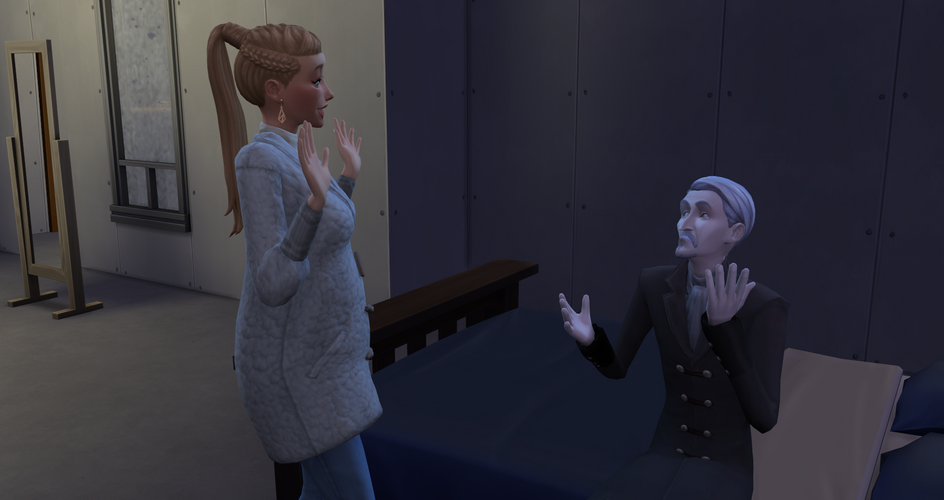 Vlad: We’re moving out of this shack? We’ve come into a fortune?

Vlad: Oh no – I mean, how wonderful, another baby! We’d better come into a fortune soon…

To finish this chapter, I have some news of Turner. He is now married to a townie whose name I forget and he has two children (each with other women!) So, I’d say he is getting over Vlad alright. 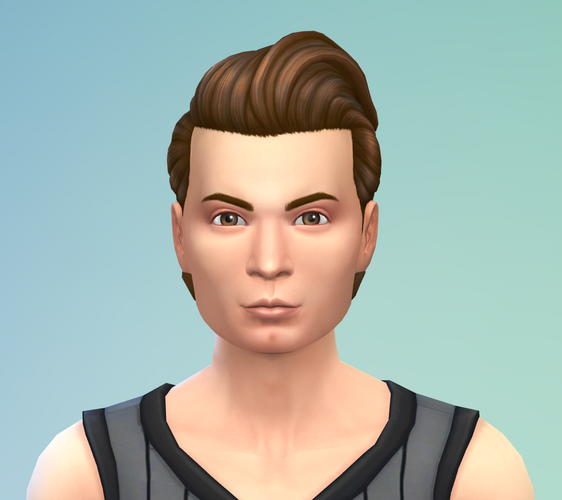 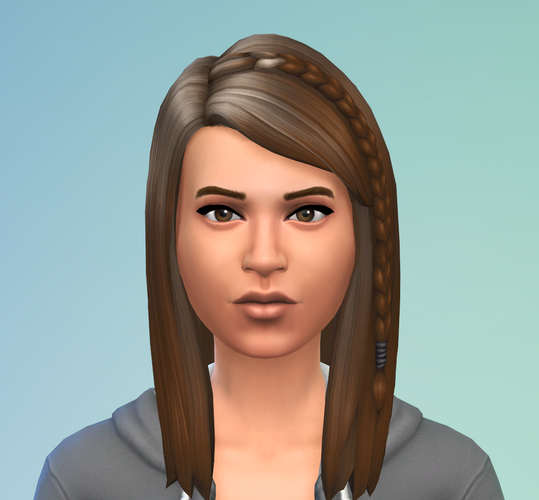 I’m sorry, I forgot to note down their names.

I didn’t realise that Turner’s hair had grey streaks in it until I noticed that his daughter’s hair was streaked with grey and figured out that she must have inherited it from Turner (since Penny does not have that hair). I’m so unobservant!