Ok I know that I finished the challenge last chapter, but then something happened and so I just had to do an epilogue. 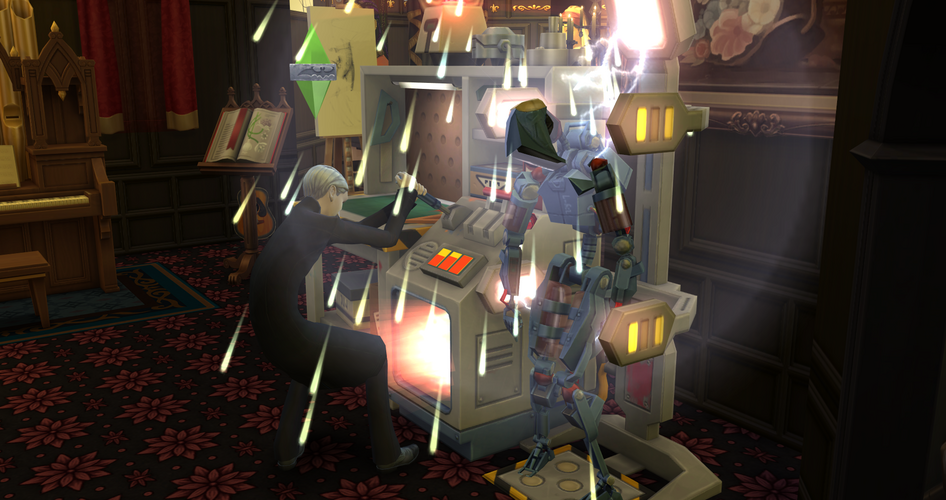 You may remember that back in chapter 43 Vlad built a servo but I couldn’t activate it because it would take up a household slot. Well anyway, with all the kids now gone, we were finally able to bring the servo to life. 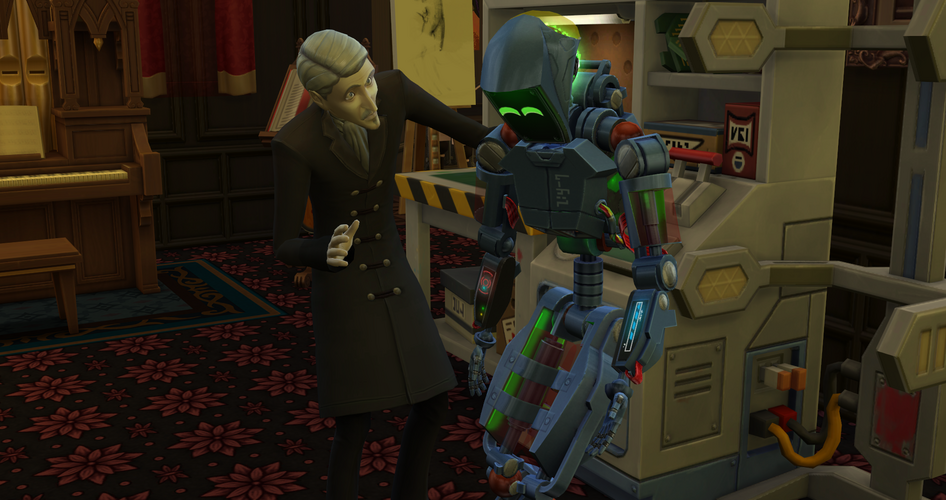 Vlad showed more concern for his creation than he ever did for any of his children. 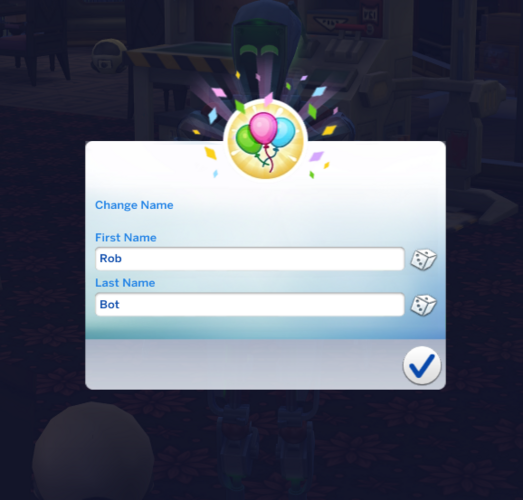 I named the servo Rob Bot because I am super imaginative and no one else will have thought of that one, will they? 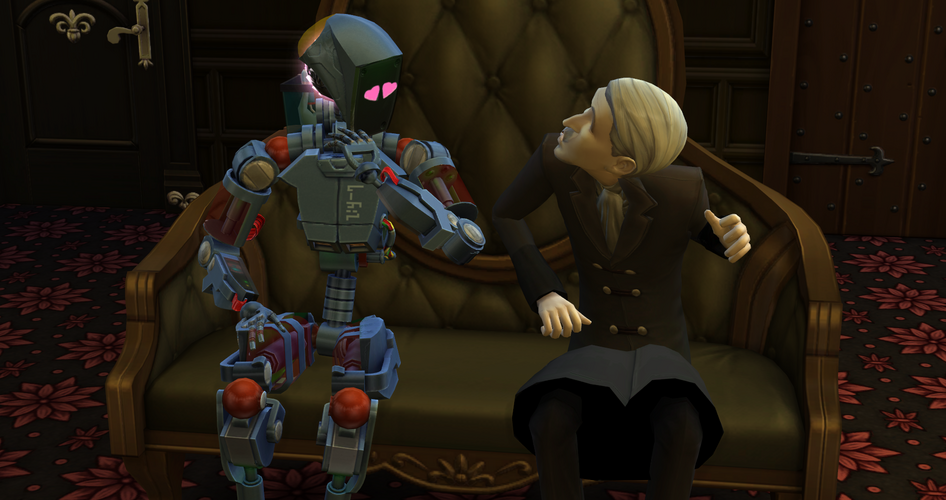 Of course, the first thing that I had Vlad do with his creation was to flirt with him.

Ok the heart eyes that servos get when they are flirty are just too cute. 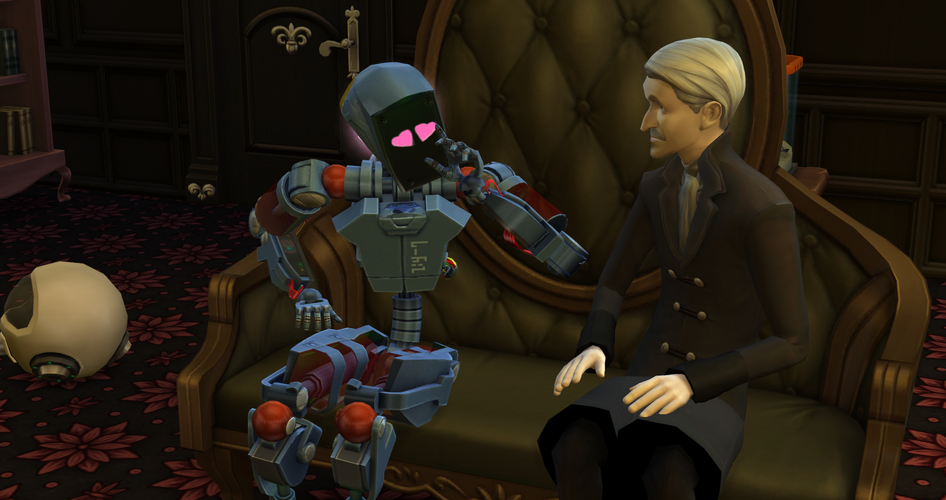 Rob reciprocated his advances very easily, but then Vlad was the only other sim he had ever seen so had sort of an unfair advantage.

Vlad: Why yes, I am considered to be one of the most handsome sims out there. 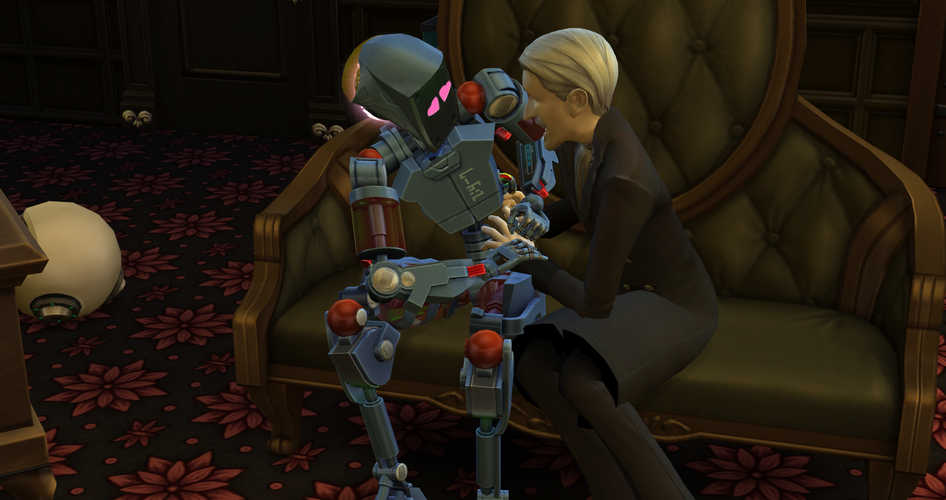 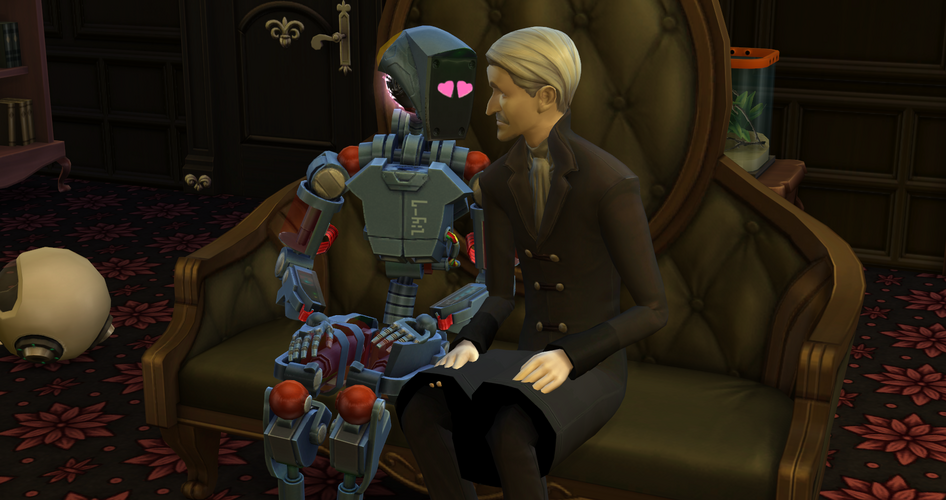 Aww now they are staring into one another’s eyes. I am starting to wish they could be a proper couple… But no, I mustn’t think like that. I still have plans to play the Casanova Challenge with Vlad so they can’t be exclusive just yet. 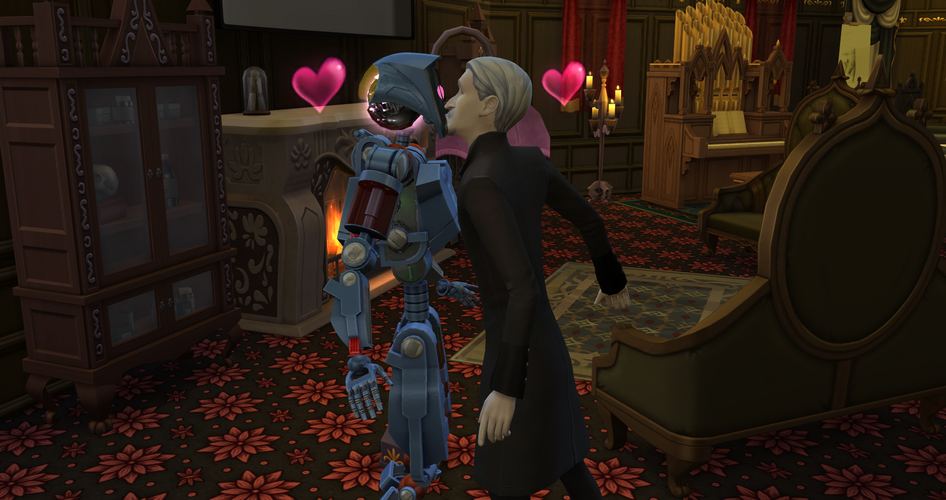 Vlad and Rob had their first kiss. Wait just one second, how can you kiss someone who has no lips? 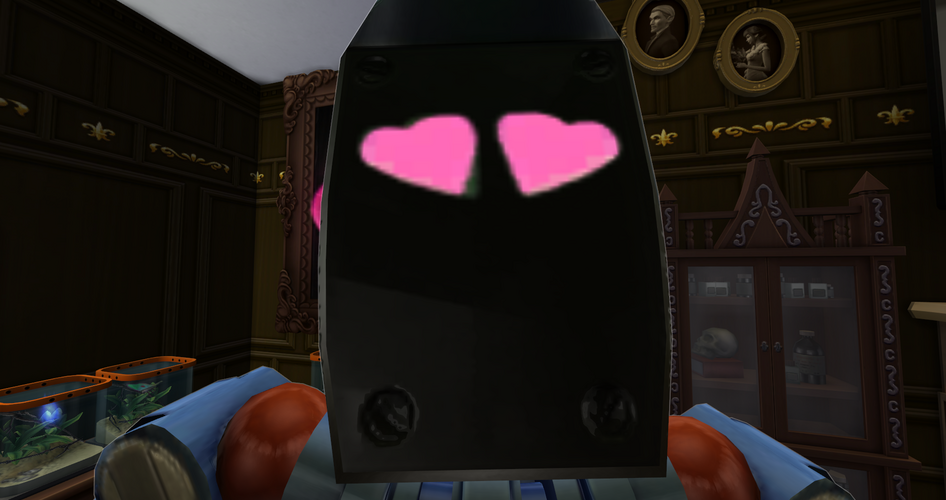 Had to check in first person mode and nope, still no lips… Must be like kissing an ipad screen. 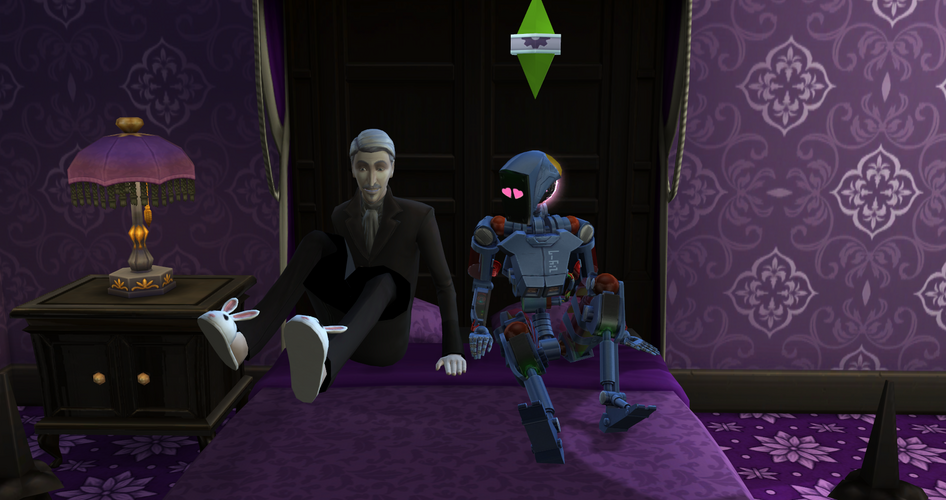 Now for the exciting bit. You can’t try for a baby with a servo, but you CAN woohoo with them so I set MCCC’s ‘risky woohoo’ to 100% and had Vlad and Rob woohoo. 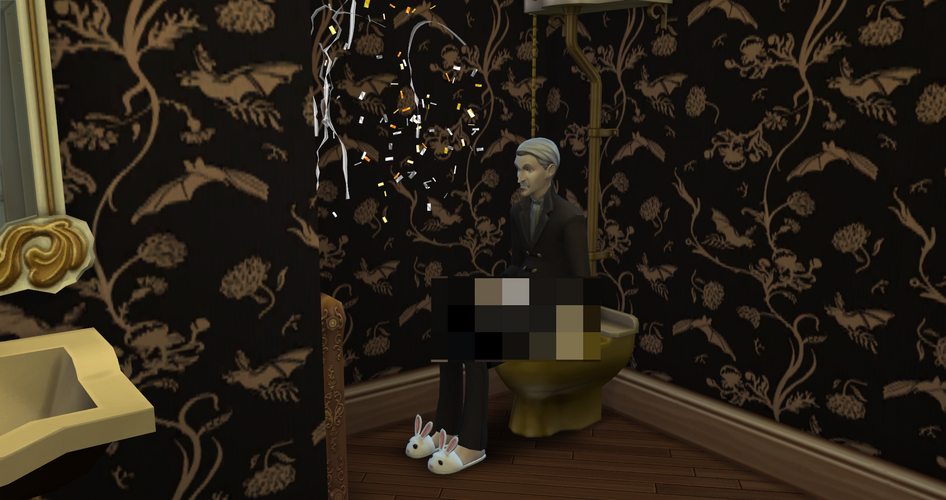 I made Vlad take a pregnancy test.

Vlad: Why would I take a pregnancy test? I haven’t tried for a baby with anyone and servos can’t have children.

Vlad: Confetti? No no no no you promised me that I didn’t have to get pregnant ever again! You double crossing traitor, you tricked me!

Well at the time I meant it Vlad but then, well, things changed. I didn’t know that risky woohoo would work with a servo either. 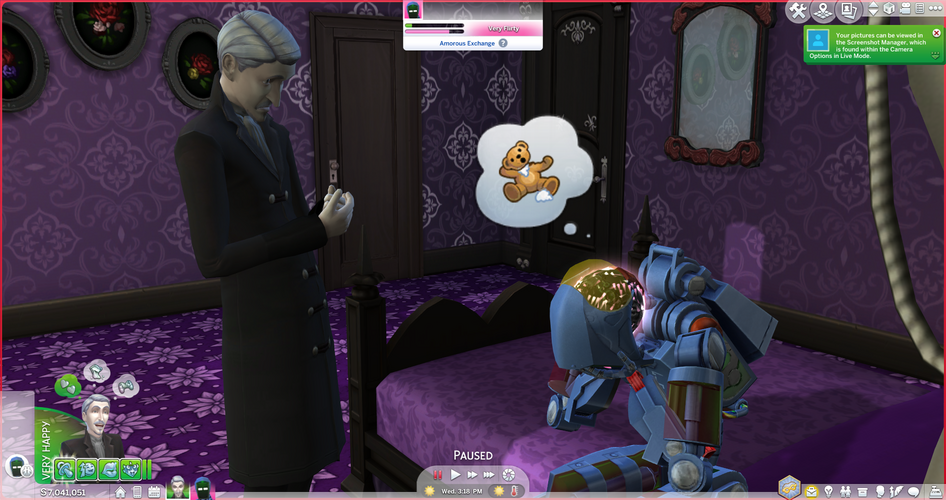 Rob was generated with the hates children trait so he was perhaps even more upset than Vlad to hear the news.

Poor Rob, he is only minutes old and now about to become a father. His children will be only three days younger than him! 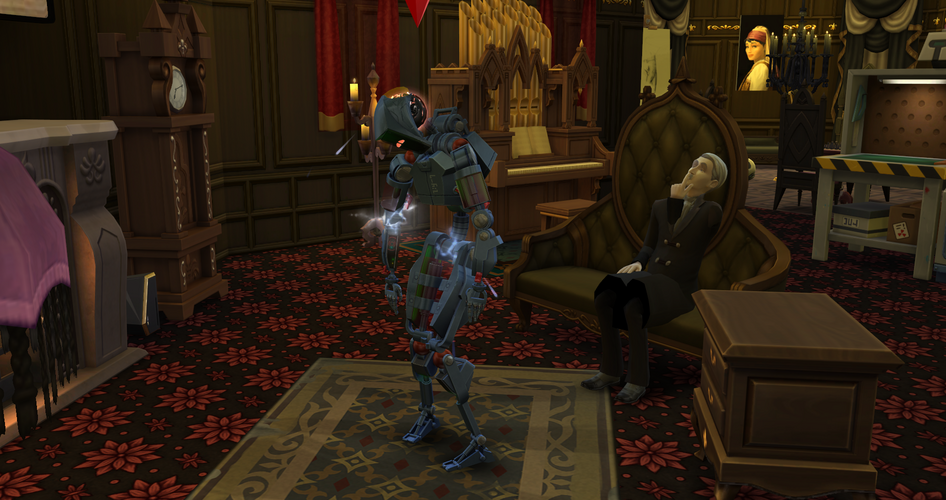 I fast forwarded through Vlad’s pregnancy and Rob broke down because I didn’t know that you had to periodically tune servos to keep their durability need. Oops. 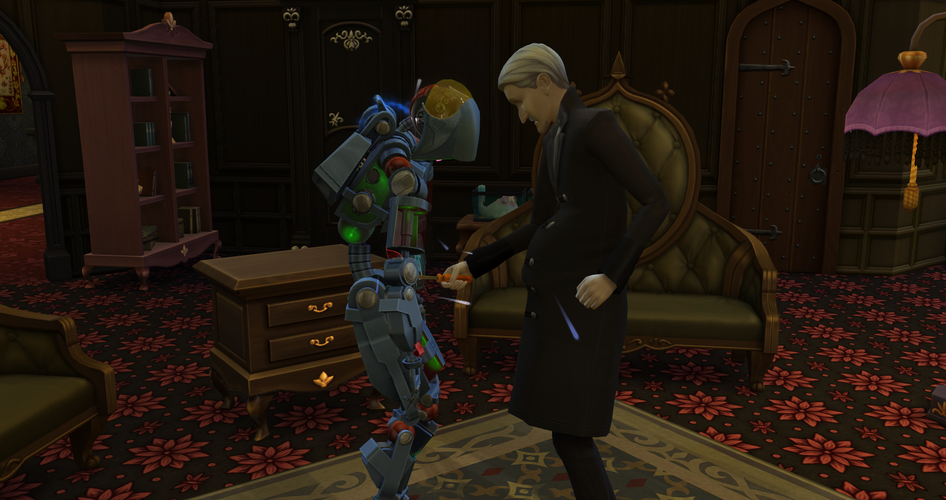 I thought about just leaving Rob to turn into scrap metal, since his purpose was done, but that seemed like a waste, so I had Vlad repair him. 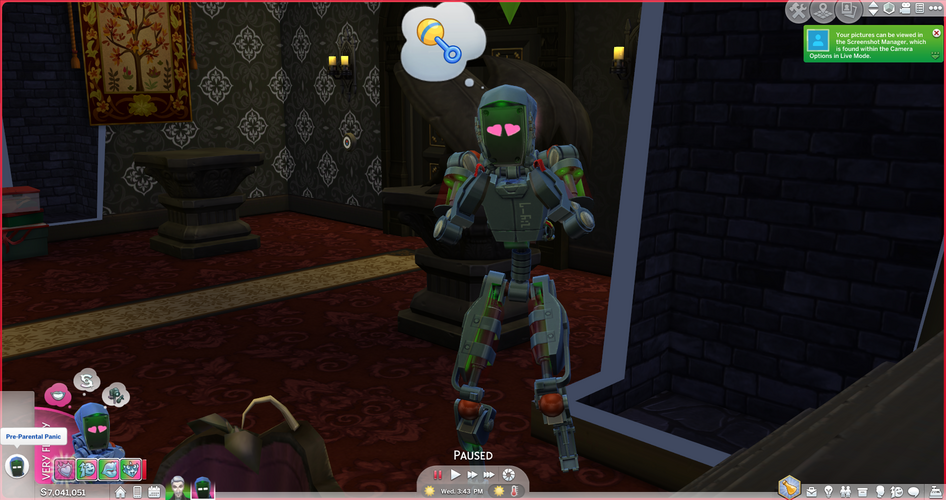 Vlad went into labour and Rob had a pre parental panic. 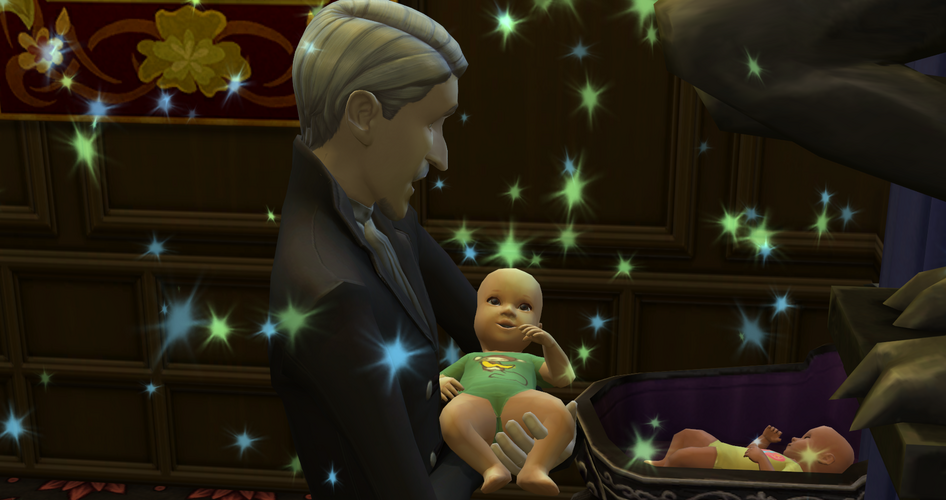 Two babies were born: a boy called Jabari and a girl called Brynn. So, Vlad’s army is now 102 strong! 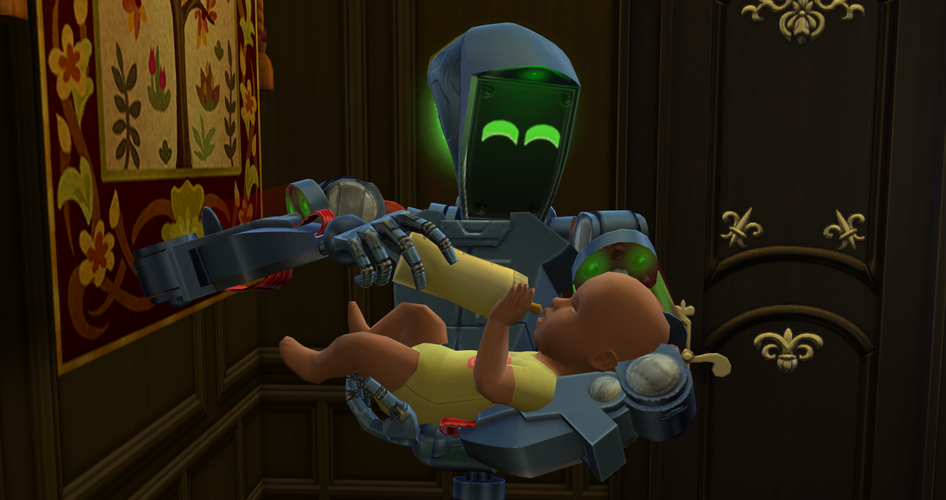 Aww Rob turned out to be a good father after all….

… But not for long! Since the challenge is technically over, I aged the babies straight up to toddlers and then to YAs. 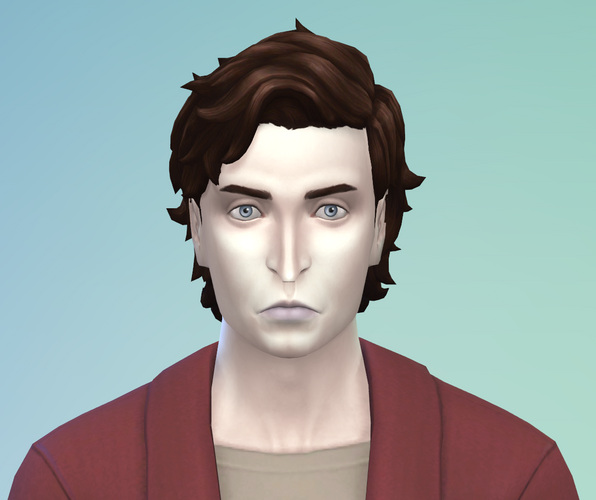 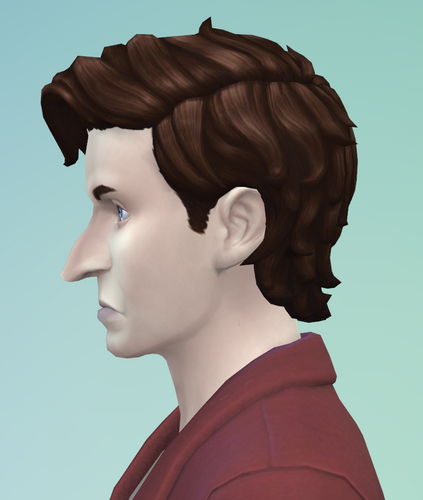 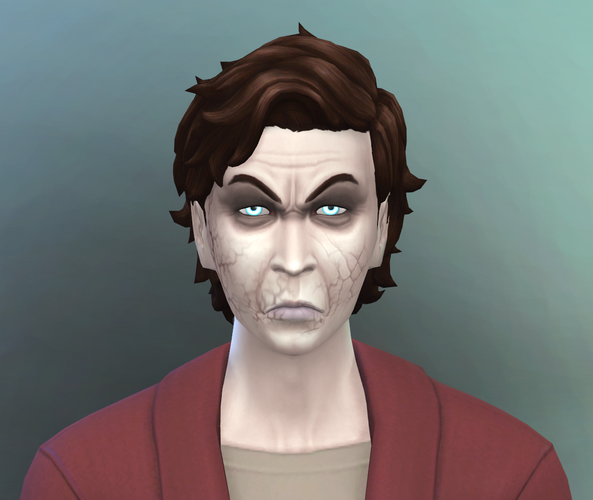 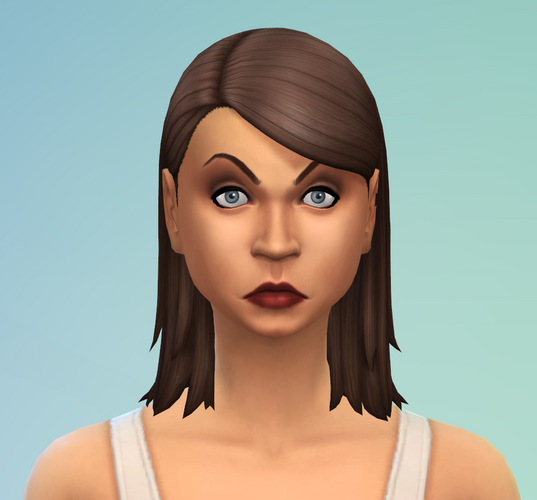 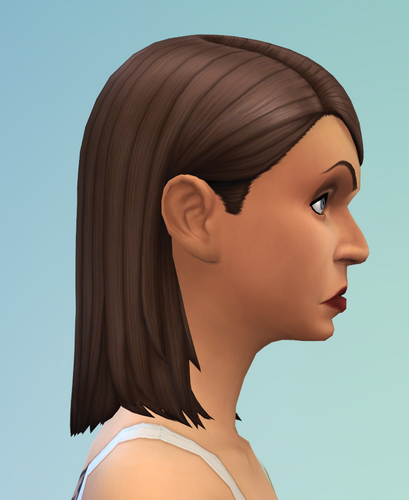 Brynn would have been pretty if it hadn’t been for her mouth and chin.

It is a bit disappointing that they just look like normal sims, no trace at all of their robotic parentage, but no less than I was expecting. 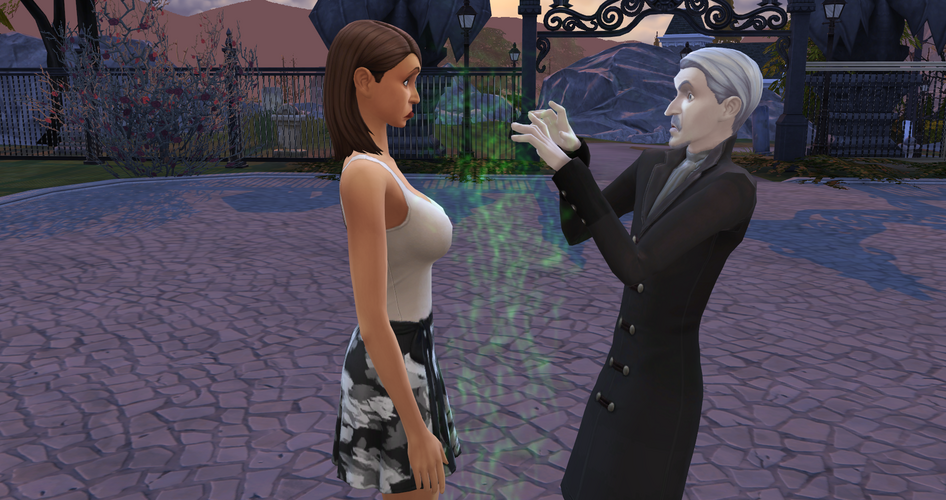 Brynn was not born a vampire, so I directed Vlad to turn her…. 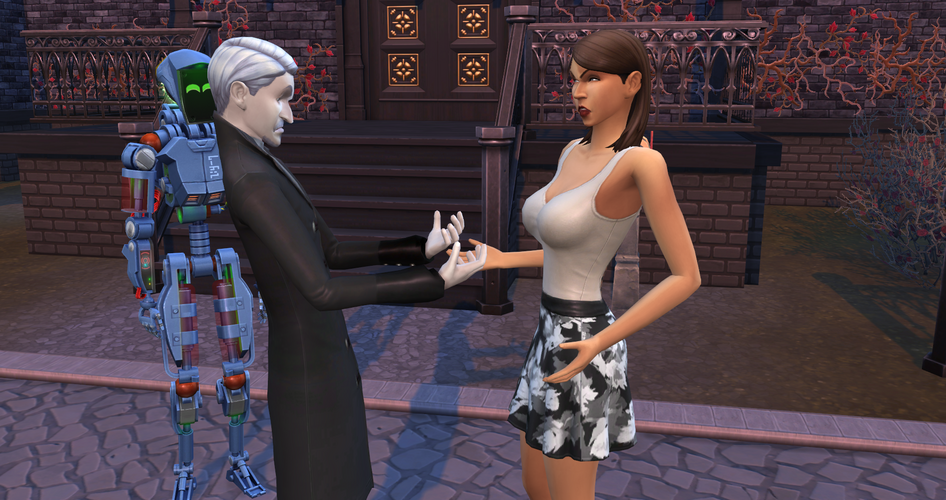 … And Brynn RESISTED him! He actually failed to turn her, which I didn’t even know could happen. Vlad clearly couldn’t believe it either, judging by the dumbfounded way in which he is staring at his hands. 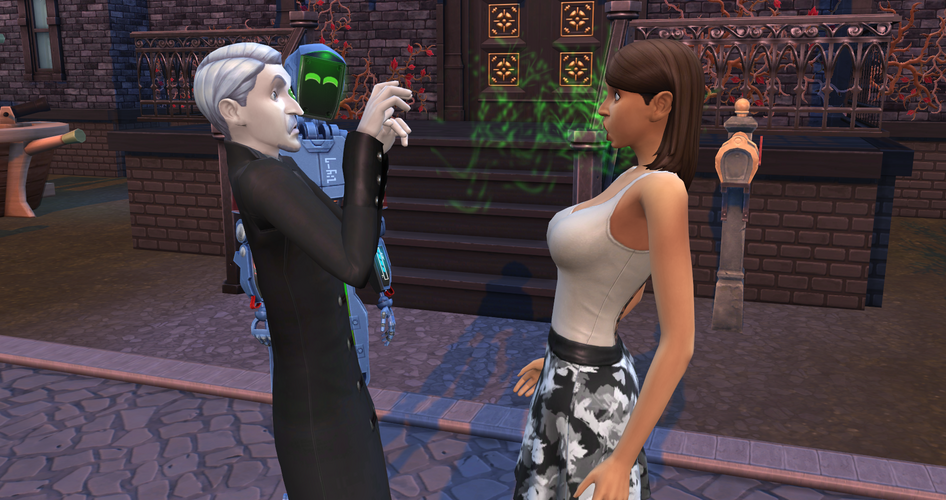 But Vlad had a second go… 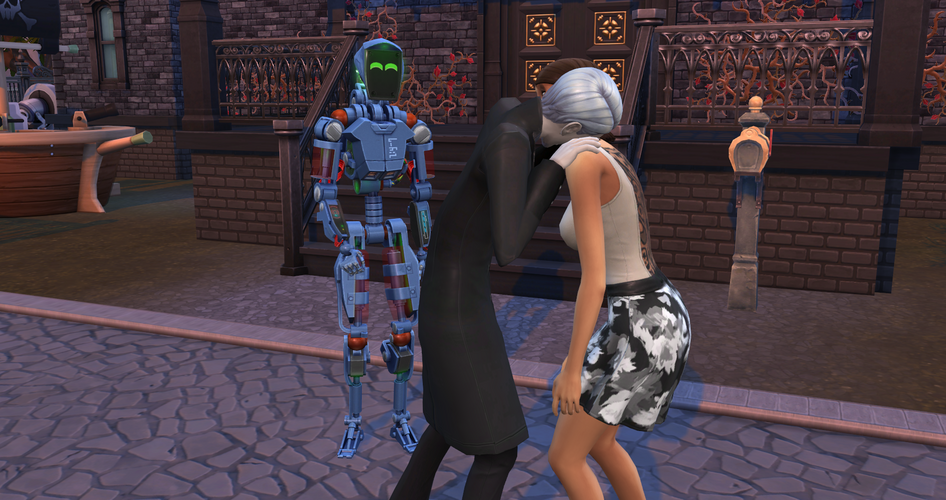 … And this time he was successful.

LOL at Rob just happily standing there watching as Vlad sinks his fangs into his daughter’s neck. 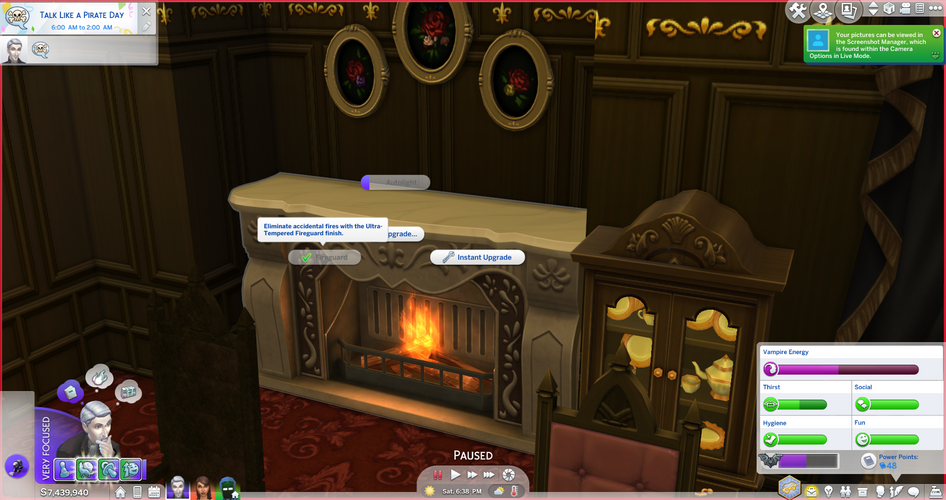 Oh you remember the fire last chapter? I said back then that I thought Vlad had installed a fire guard to stop freak fires and when I checked the fireplace I was right! So, I have no idea how the fire started. Perhaps Vlad is a closet pyromaniac. 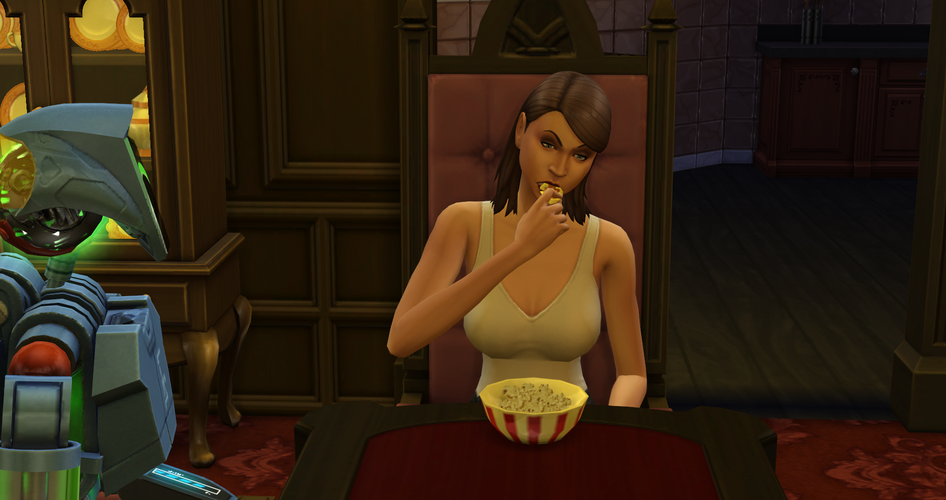 Brynn ate popcorn, oblivious to the past suffering of all the others who have eaten popcorn under Vlad’s roof. 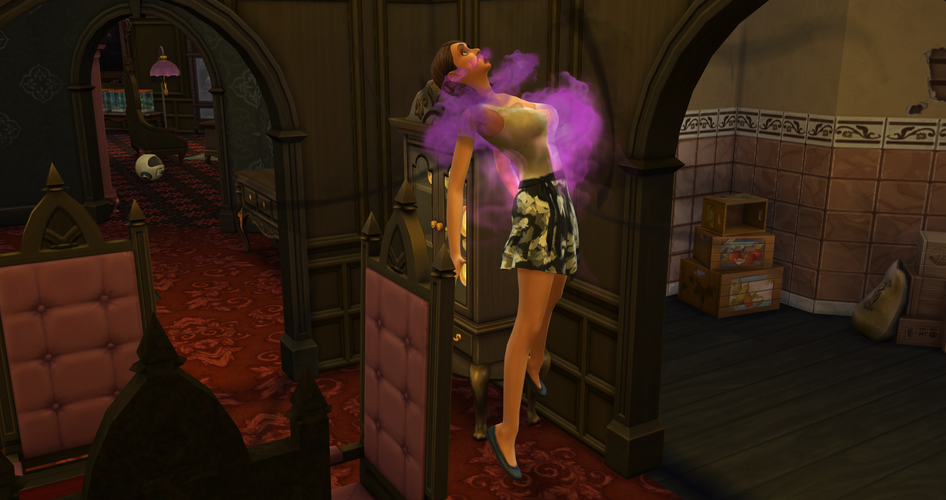 Here is her dark form: 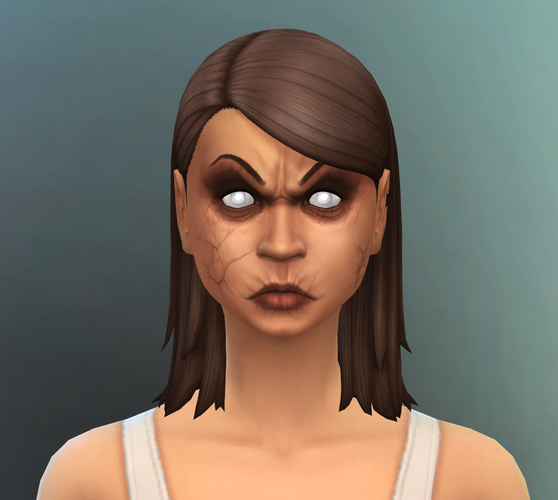 Ok now I promise I am finished finished. No more 100 baby chapters…. Though I can’t promise that I won’t do the Casanova Challenge with Vlad at some point.