First off, I need to apologise for not posting an update in so long . The truth is that my life’s been so hectic lately that I’ve not been able to play for months. First I went back to uni for my third year but within a few weeks I had to make the decision to take a year out. So, I went back home and got a part time job.

Then, my family decided to get a puppy which seemed like it would be a wonderful experience but quickly turned into a nightmare. The puppy (a now 4 month old Pomeranian called Jasper) turned out to be seriously unwell when we got him and within a few days was in a vet hospital where he had to stay for over a week. So, that was all really stressful. Thankfully he is all better now but wow caring for a puppy is hard work. I do most of the work since I’m at home the most which means that I spend pretty much all my spare time with him. But I did figure out how to play Sims lately. While he sleeps on me I can play! Hence, my returning to the game and to good ol’ Vlad.

Here are some pictures of Jasper, by the way: 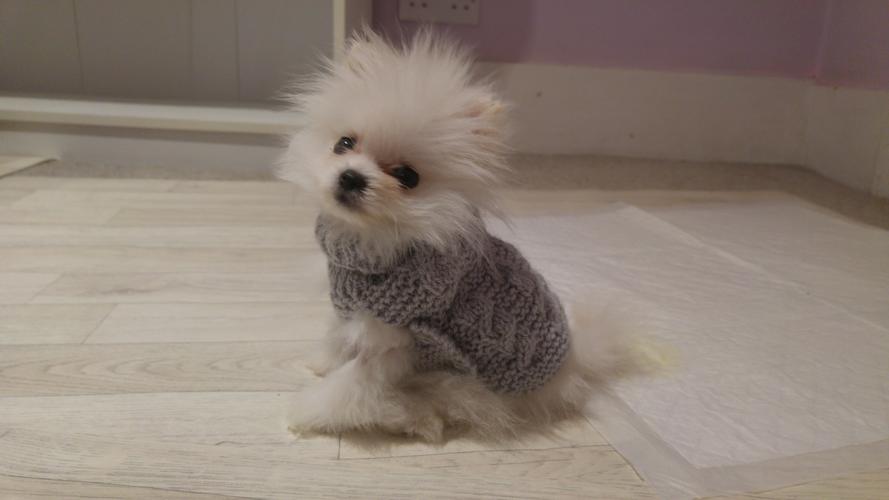 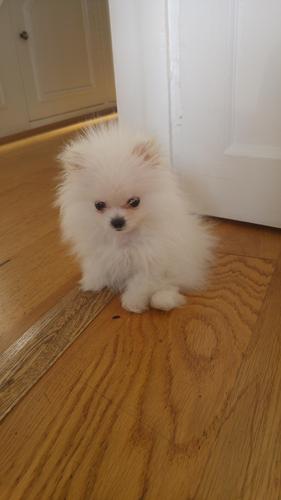 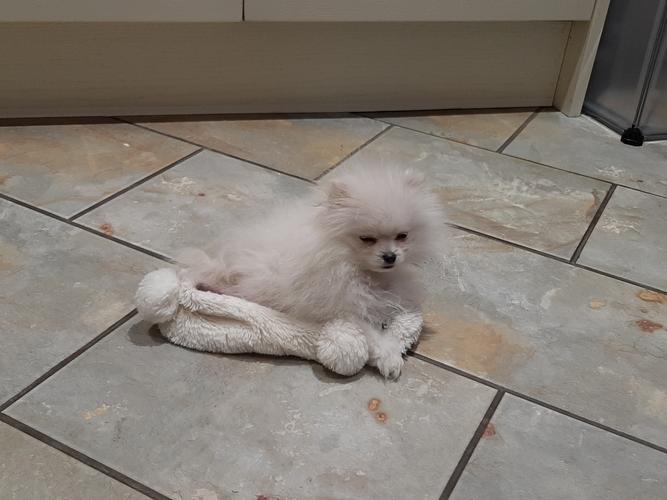 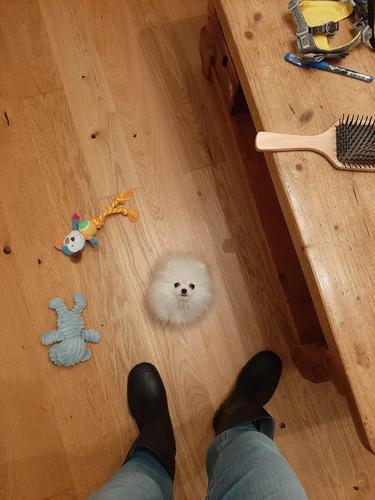 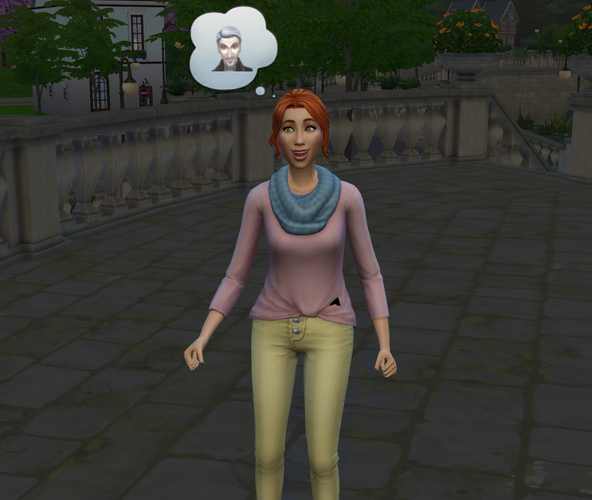 Since we had free household slots, it was time for Vlad to find his next donor. When I got DU (half price – thank you 20th anniversary!) I was struck by how pretty the Pleasant twins are. So, I made up my mind that one of them was destined to be the mother of Vlad’s next child/ren.

By the way, I really like how Angela and  Lilith’s names tie in with their traits. Angela is the ‘good’ twin and her name means angel, whereas Lilith is the ‘bad’ twin and she shares a name with the first wife of Adam who supposedly became the mother of demons (thank you Sabrina for educating me).

When Vlad arrived at their house, Angela was outside looking pretty thrilled to see him, so I decided that it was her lucky day to be exploited. We’ll come back for Lilith later, not letting any of those brilliant genes go to waste! 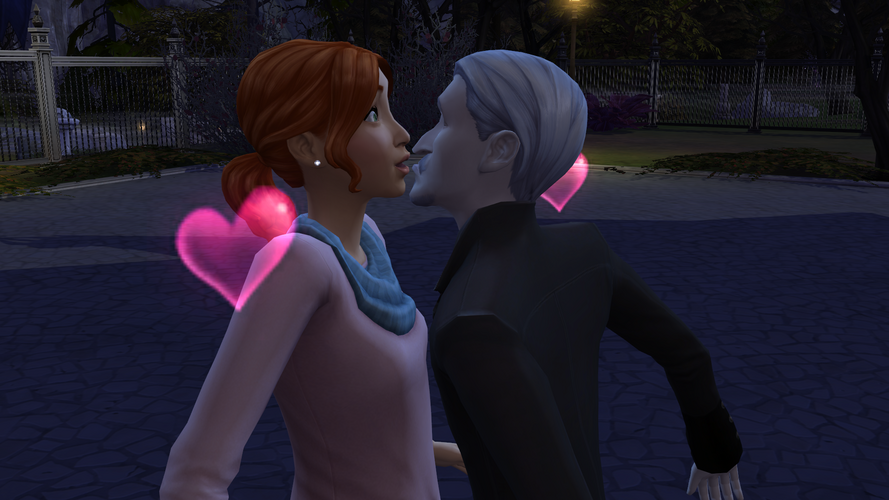 Vlad quickly secured a first kiss – he’s smooth like that (not really, he just has romantic besties introduction available from being a celebrity and all sorts of reward traits which make it easier for him to make other sims fall for him). 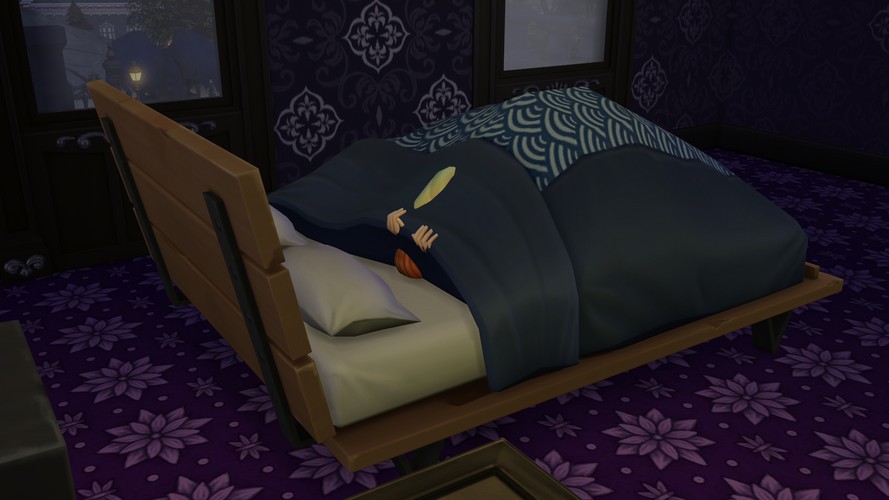 Looks as though Angela realised what she had got herself into too late and tried to escape while they were in the middle of trying for a baby. Oh actually that sounds… Dark. I didn’t mean it like that! 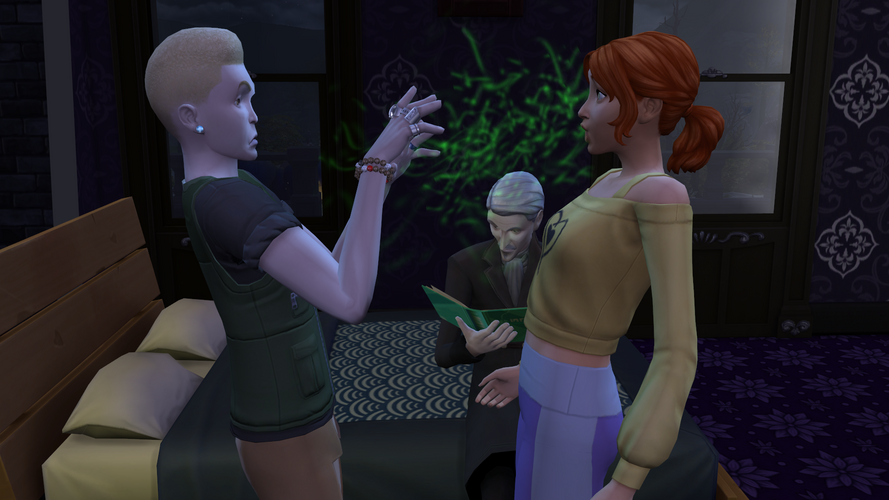 Once Vlad had got himself pregnant courtesy of Angela, Cole decided to recycle her as his next snack. I love how Vlad is just sitting there reading a book while this happens like “right well I’m finished with her. She’s all yours now son”. 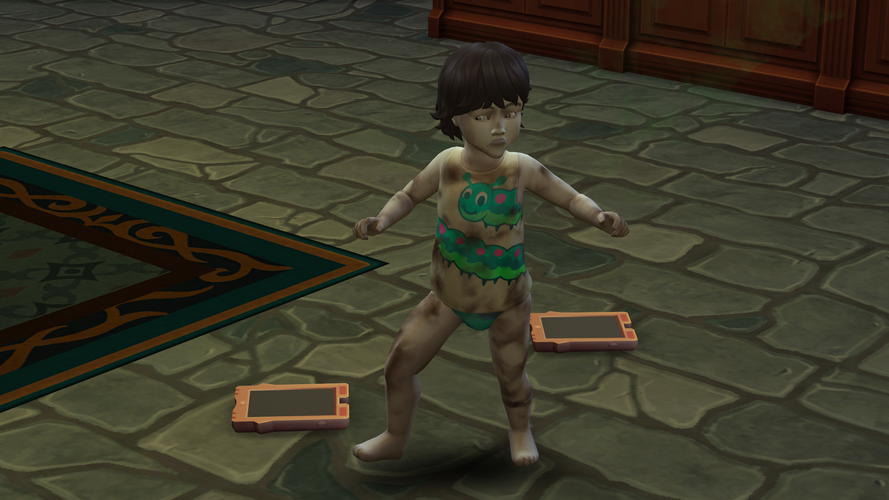 And of course we can’t forget the toddlers in the dungeon (which I routinely do in gameplay). Bryce looks like he’s doing well, doesn’t he? 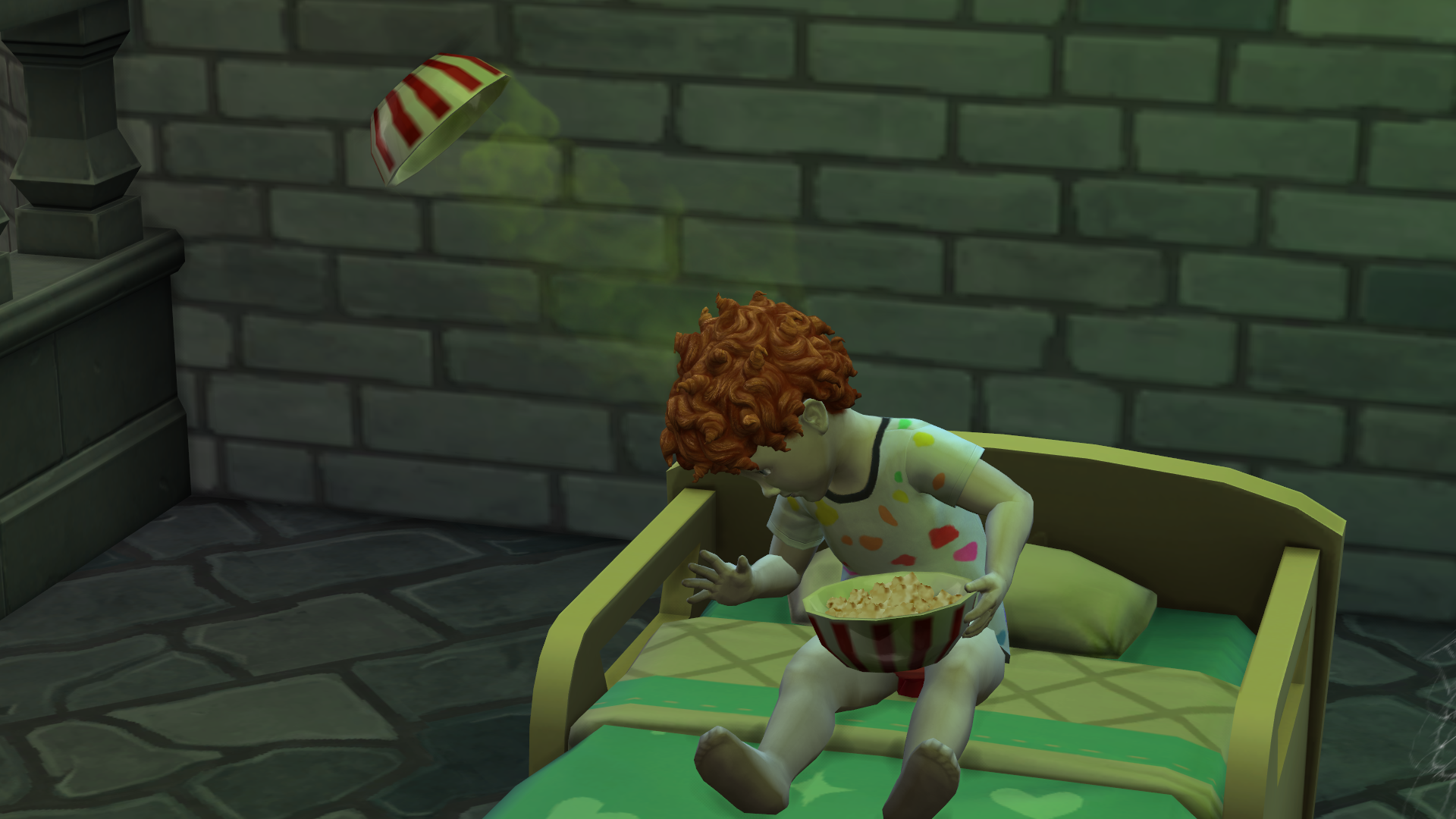 So, I guess they STILL haven’t fixed the flying plates/bowls glitch. Why am I surprised? Carlton has his head in a cloud… Of rotting popcorn stench. 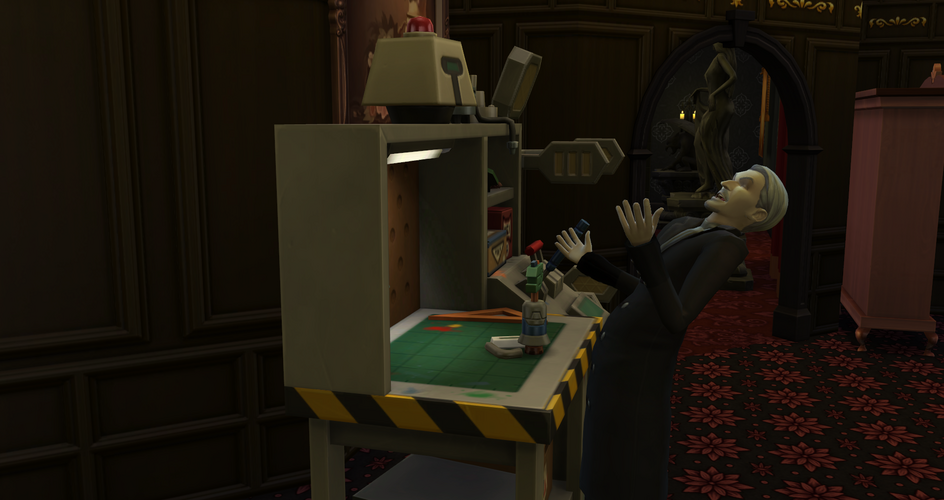 I don’t know why Vlad is laughing evilly while building a toy. Maybe he booby trapped it to blow up in his kids’ faces, I wouldn’t be surprised.

The way I play this challenge, Vlad has lots of free time. First off, he is a vampire and the strengths he has mean that he really only has need of plasma. No sleeping, no peeing, no showering and no need for social interaction. I let the toddlers fend for themselves in the dungeon and the children and teens are also self-sufficient. So, the only thing Vlad has to do is care for the babies and on occasion help with homework or school projects. He can’t have a job as it isn’t allowed in this challenge, so he has too much time on his hands!

I decided to have Vlad learn robotics. At first, I thought it would be cool if he built a servo since then it could take care of the toddlers and they may not be on the brink of death all the time. But, I think that a servo would take up a household slot and that we cannot afford. 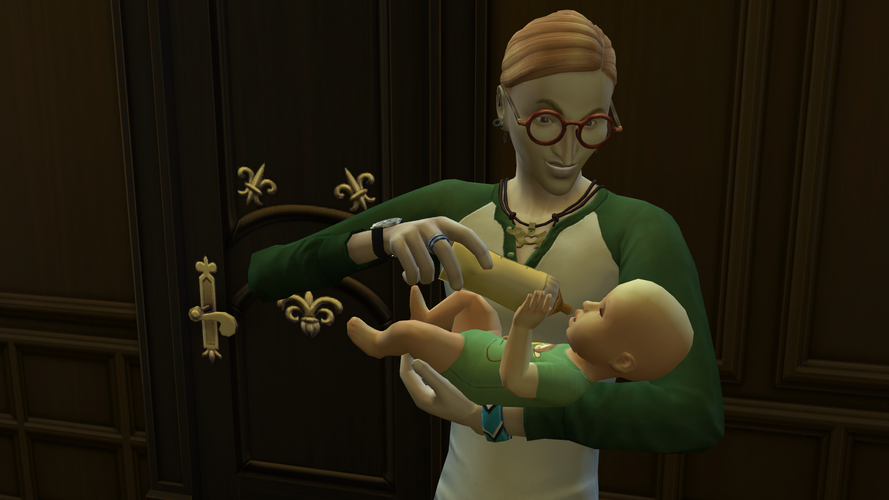 Since Vlad had better things to do than tend to the health and wellbeing of his newborns, that task fell to Cole. 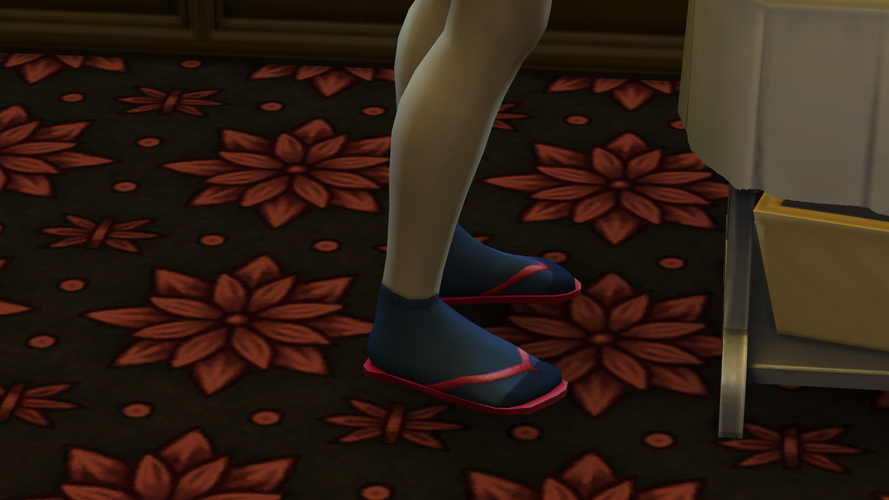 Flip flops and sandals Cole? Why? And how does that even work? 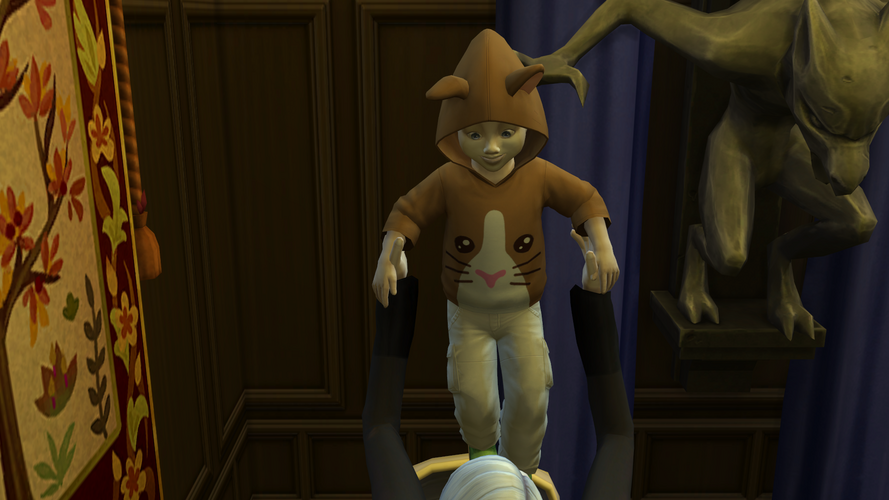 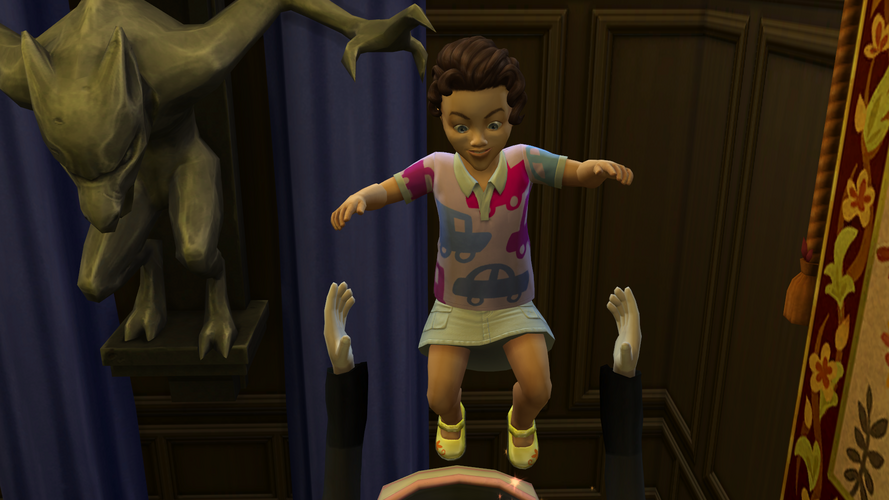 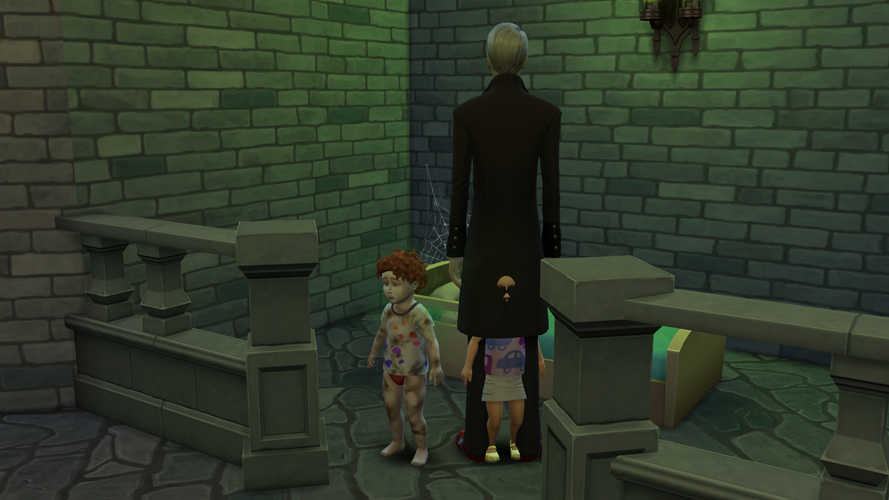 Upon being incarcerated in the dungeon, Evangeline did her best to crawl back into the womb (or whatever the hell it is that Vlad grows his spawn in). 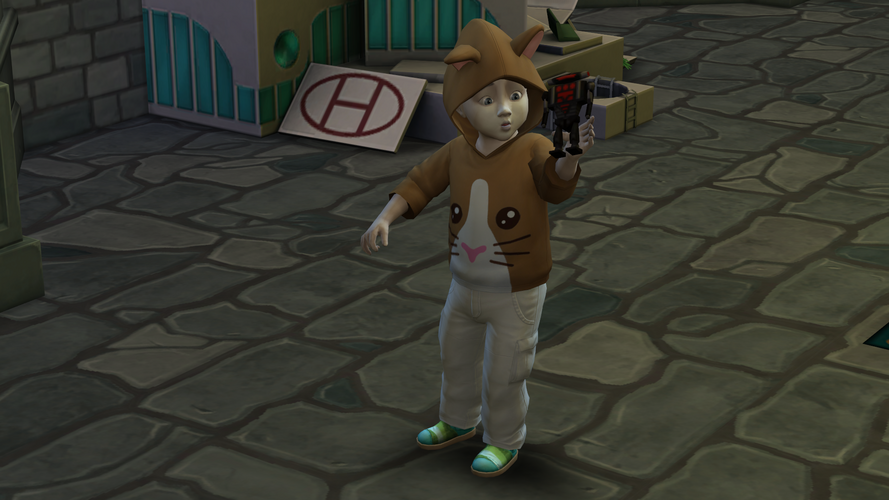 Never let it be said that Vlad is a poor father. He may lock his toddlers in a dungeon but at least he made them a toy! Here is Bradley playing with the chatterbot that Vlad crafted. 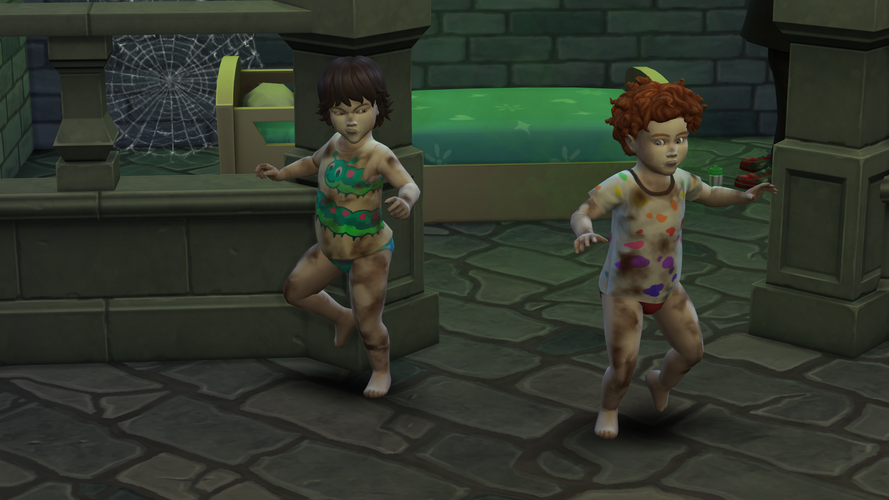 Bryce and Carlton, the current veterans of the dungeon, look completely disillusioned with life already. 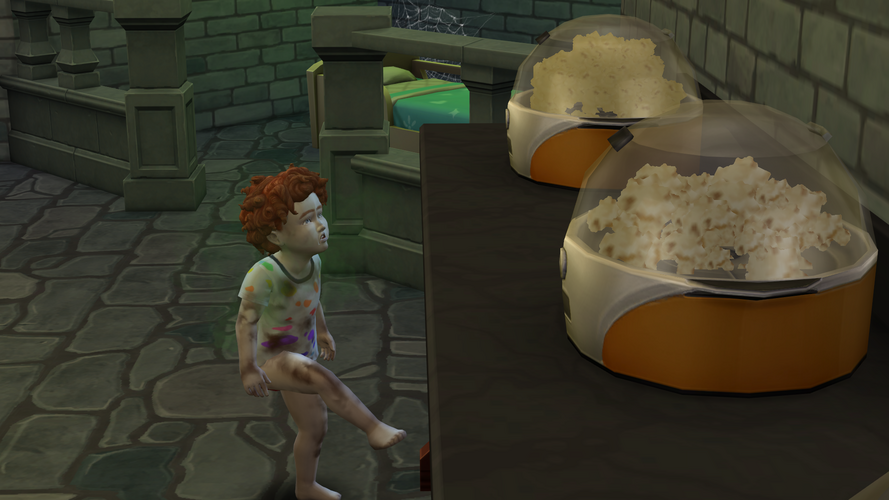 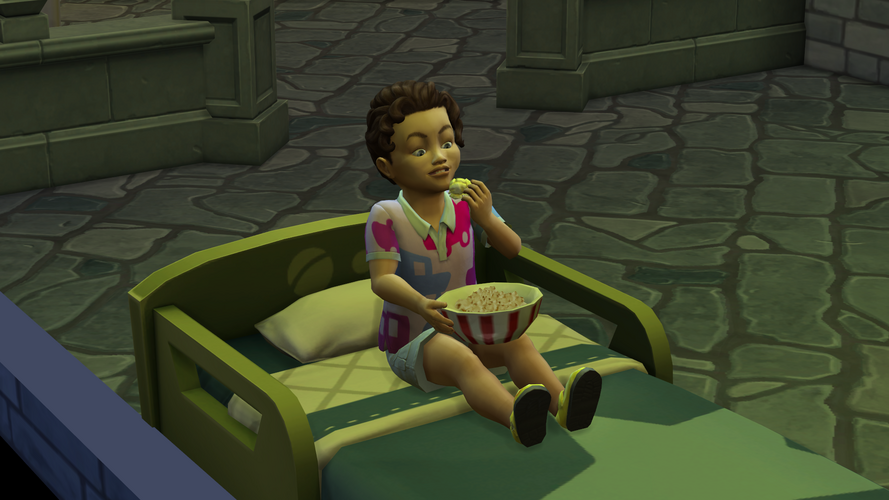 But new inmate Evangeline looked happy with the popcorn. You’ll get fed up with it soon, Evangeline. 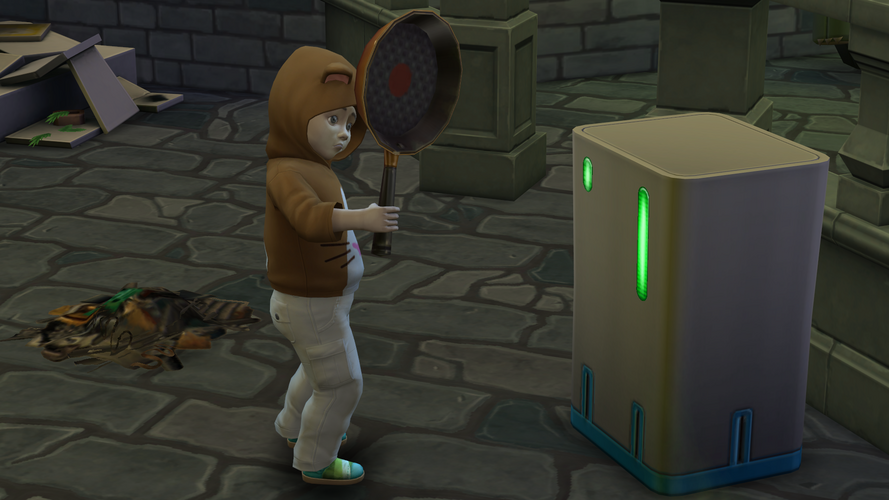 Meanwhile, Bradley found a possible murder weapon. Watch your back Vlad, I think he’s planning something. 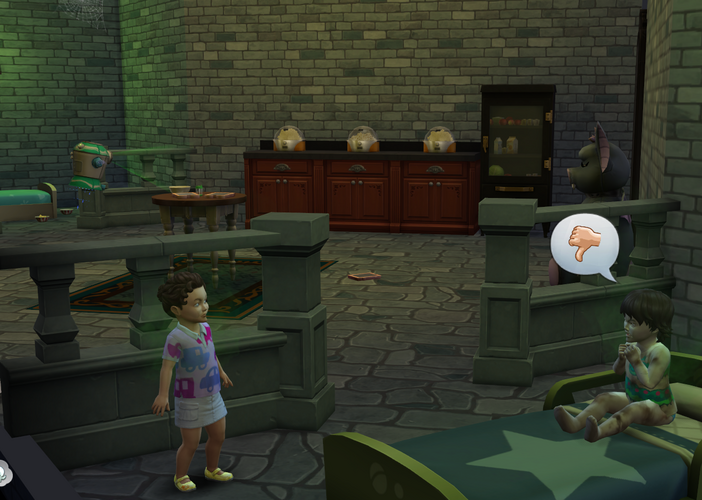 Bryce informed Evangeline about the hopelessness of her current situation. 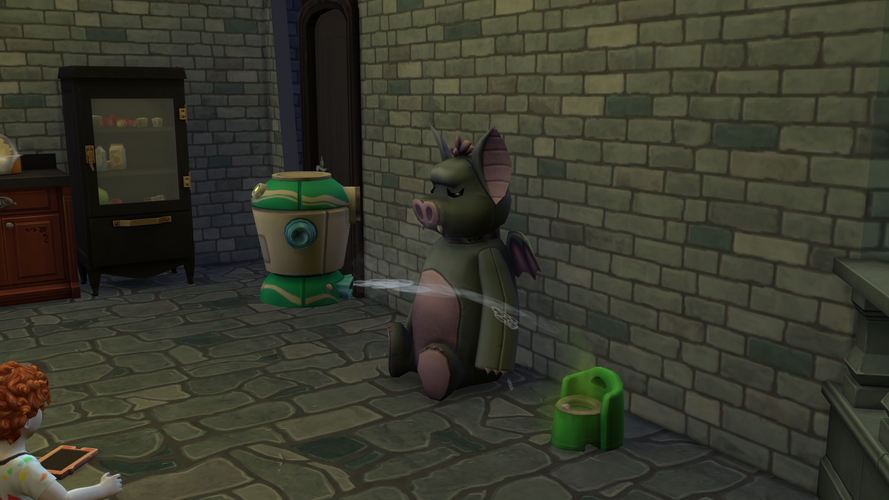 Vlad made a cleaner bot, which I expected to be a lot of use in keeping the dungeon clean but it really only cleans the dirty potties. It leaves all the dirty bowls, which is annoying. 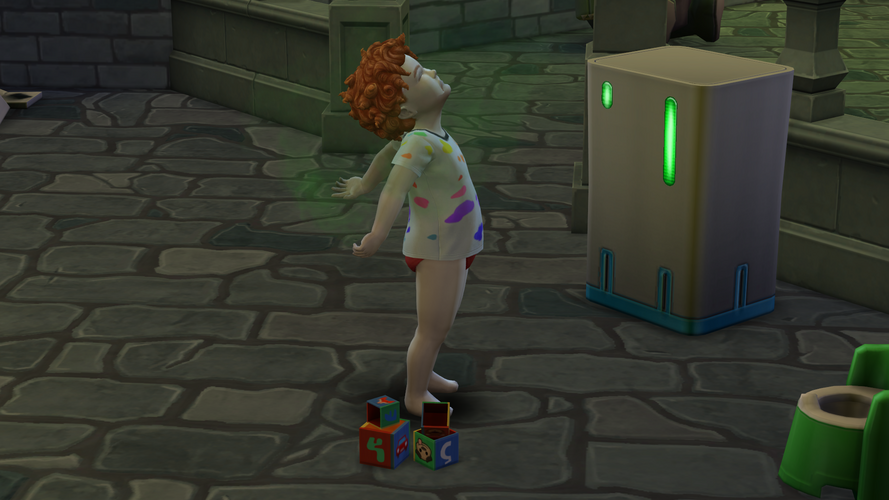 I think I have pinpointed the moment at which Carlton descended into madness.

Cole got an A at school so I was able to move him out. 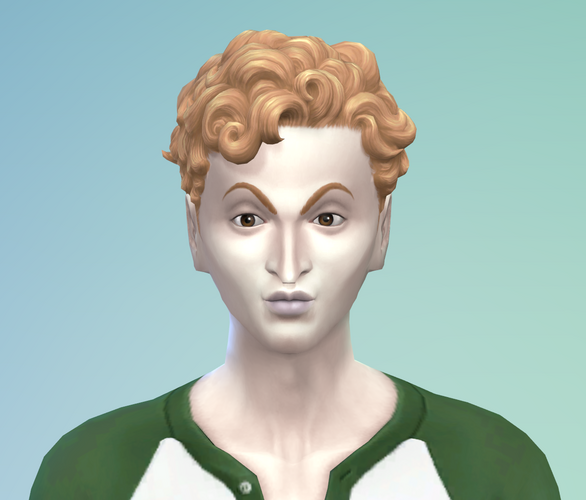 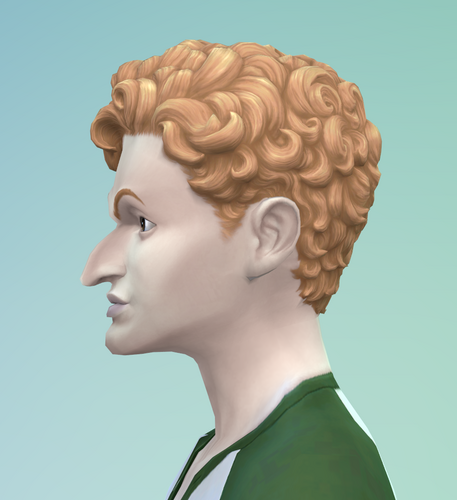 I definitely see Yuki in his lips. 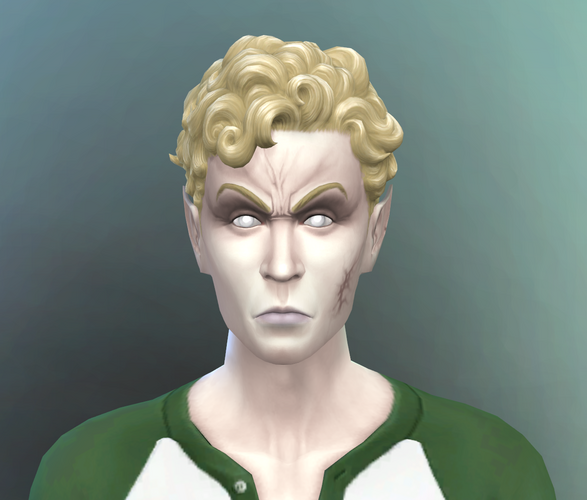 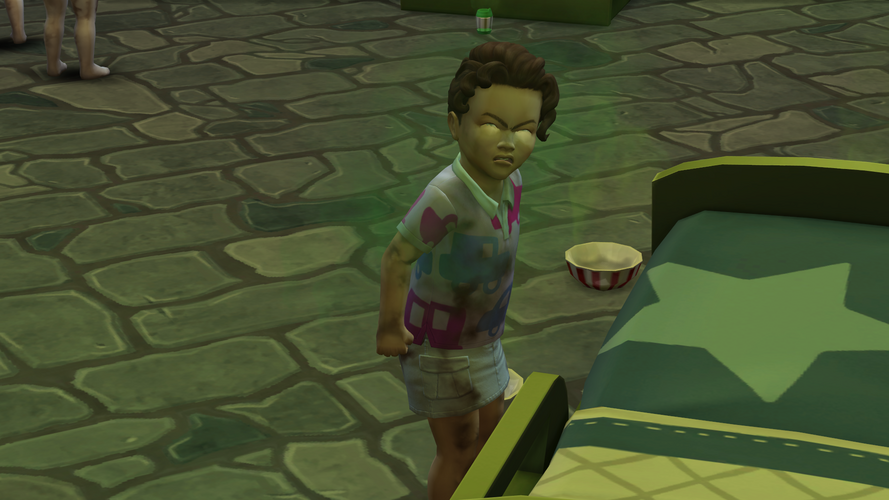 Evangeline looked as though she was possessed by a demon. I’m getting The Shining vibes… 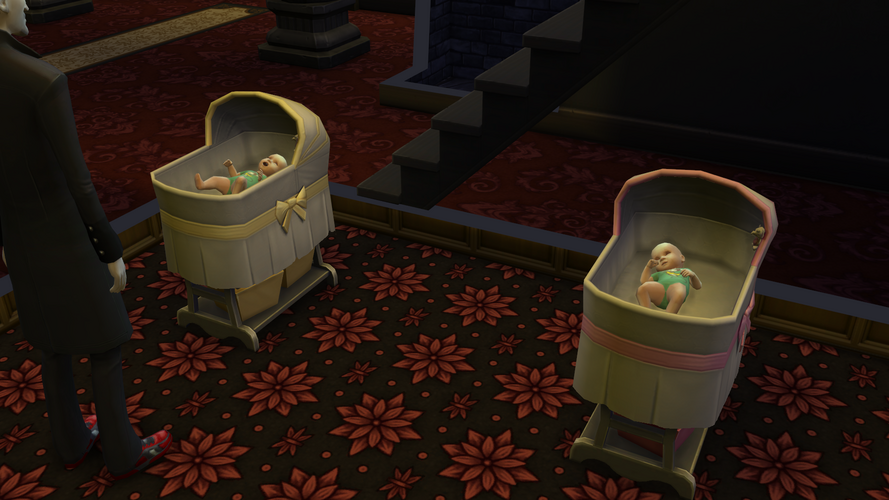 The next two babies arrived! They are two boys called Keaton (50) and Devonte (51).

That’s right, this means that:

Woah, we’re half way there

Woah, livin’ on a prayer

Take my hand, we’ll make it I swear…