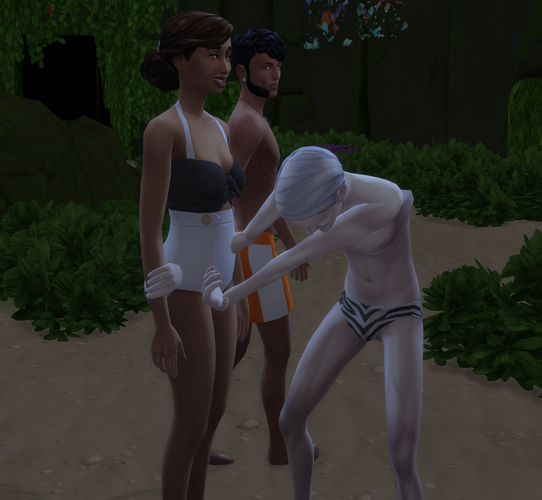 We start off with Vlad trying to drink this sim’s plasma by impaling her on his arm. Uh that’s not how it works, Vlad. 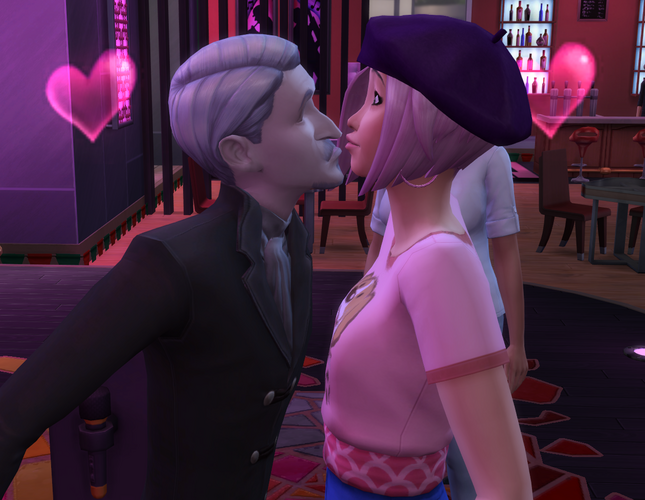 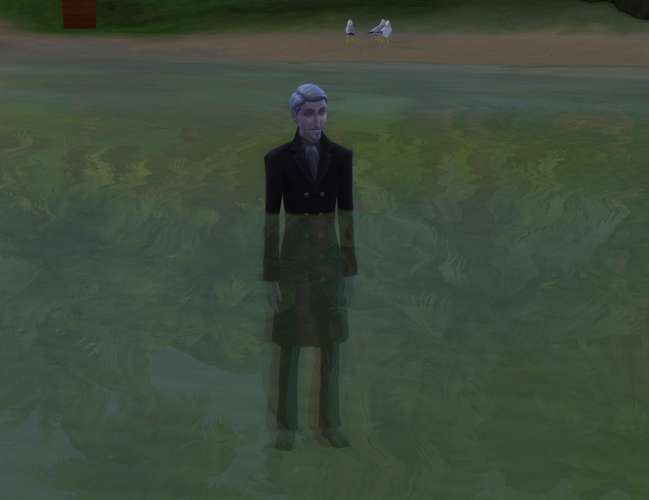 So Vlad, you like to wear your clothes in the sea and your speedos everywhere else? Makes perfect sense. 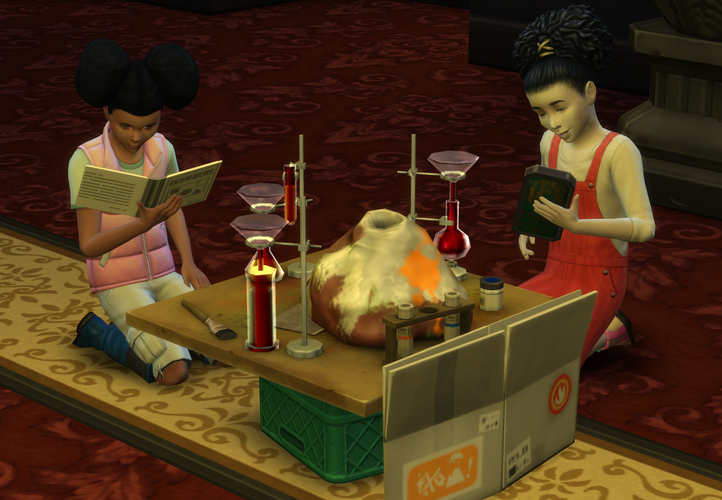 Allie and Katrina built a volcano for a school project, possibly modelled on the one whose shadow they live under in Mua Pel’am. 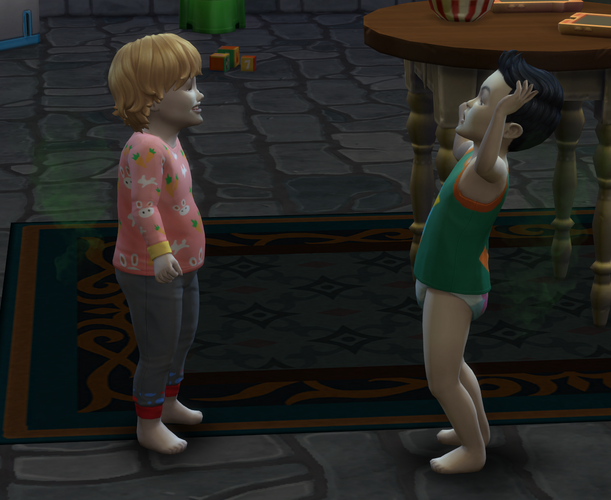 Curtis and Connie (in disguise) bemoaning their lonely existence. 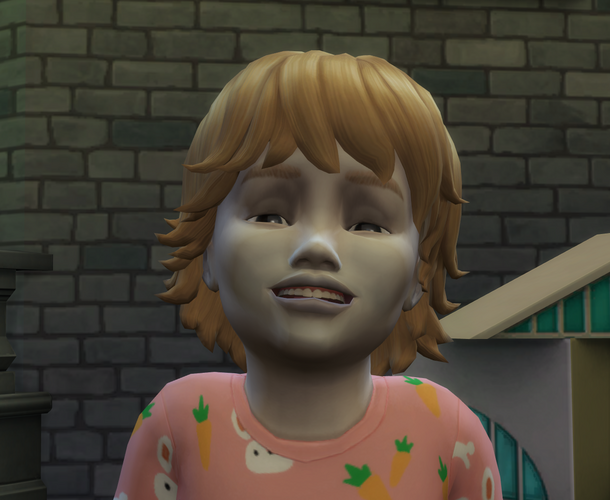 I said bemoaning – Connie, why are you gurning at me like that? 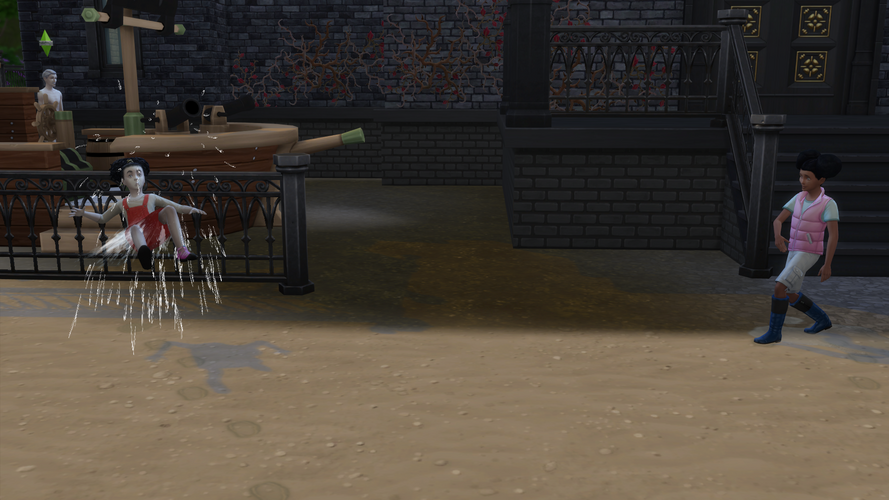 Allie and Katrina had the world’s most unenthusiastic water balloon fight… Except for this part where Katrina was floored by a small water-filled rubber sack. 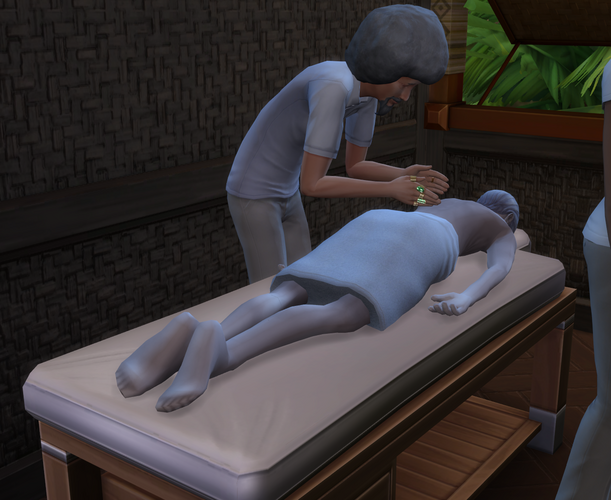 Vlad had a massage because, you know, the strains of being such a neglectful parent gets tough sometimes. 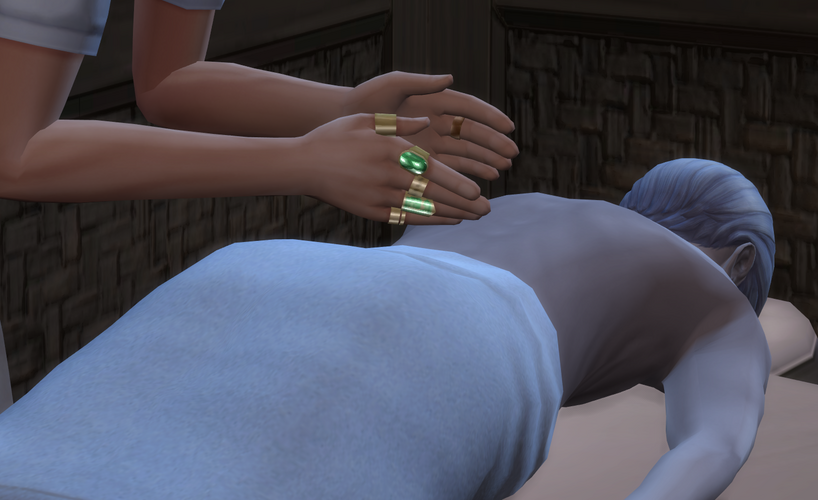 Apparently his masseuse had decided to wear every ring under the sun (except for that awful eyeball ring, thankfully). Must have made for an uncomfortable massage. 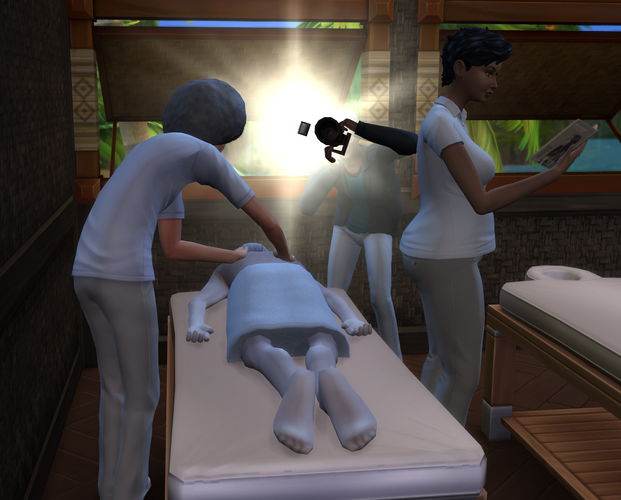 Vlad’s peace was further interrupted by a paparazzi without a sense of boundaries. 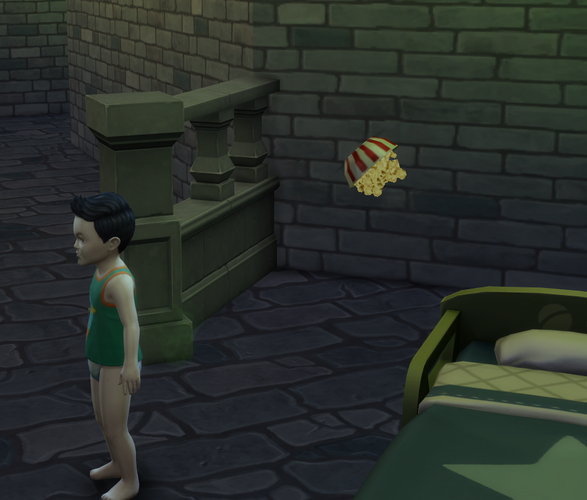 Wait, did they not fix the flying objects glitch? I can’t remember if I took this picture before patching or not so I can’t be sure. I’m annoyed if they didn’t fix it. 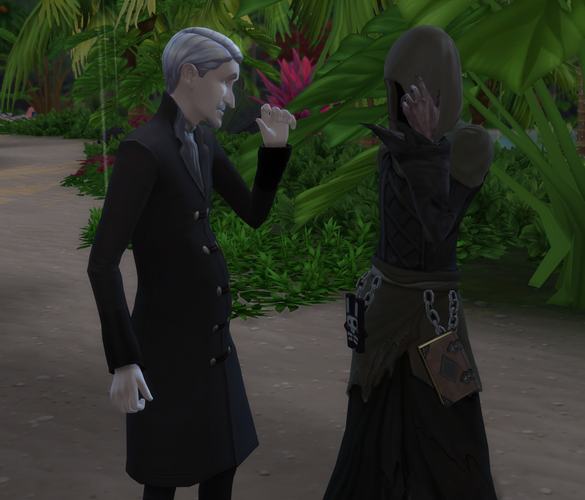 Grim invited Vlad on a date. Vlad shared the news of his pregnancy and mere seconds later Grim decided to leave.

Grim: Ugh, I could get fired for this. My job is to take life, not create it! 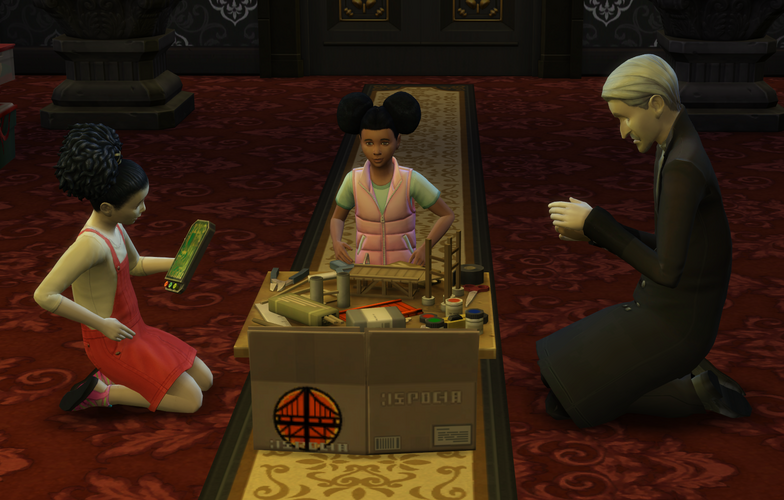 Grim, Allie and Katrina worked on yet another school project. 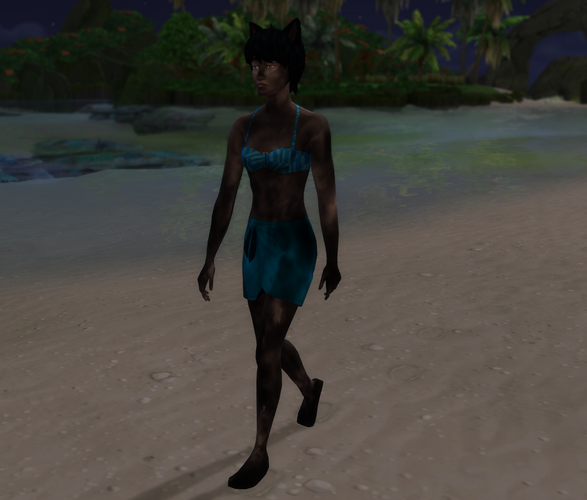 Either this sim has a case of literal sun burn or she got too closed to the volcano. 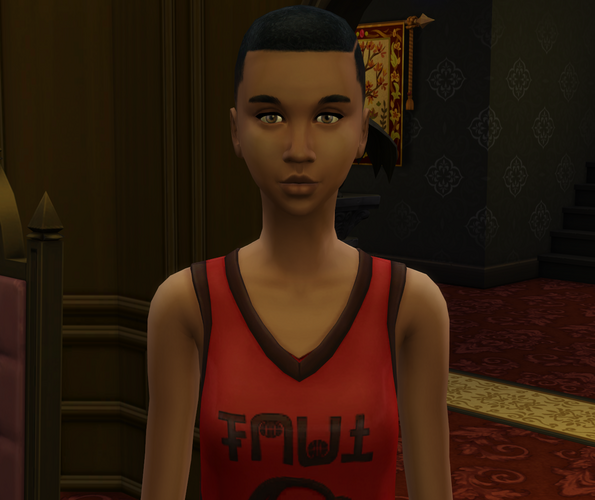 Allie got her A and became a teen, leaving behind Katrina who was still stuck on a B. 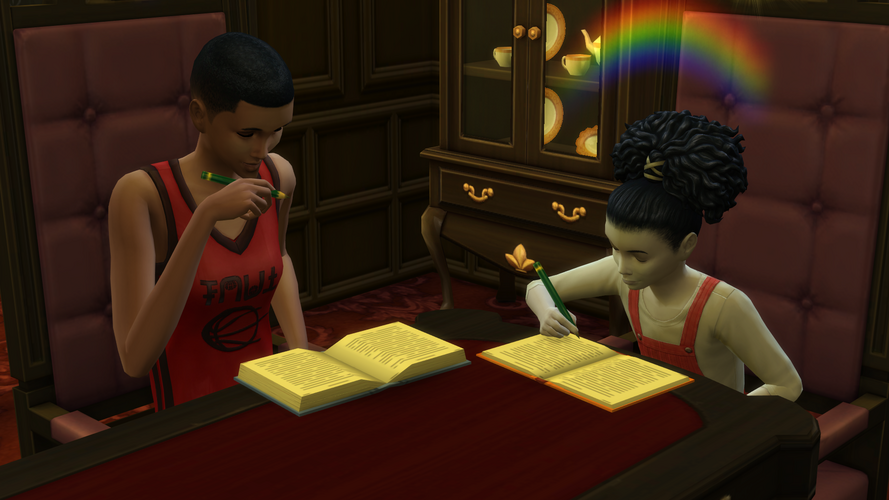 Allie and Katrina did their homework together. 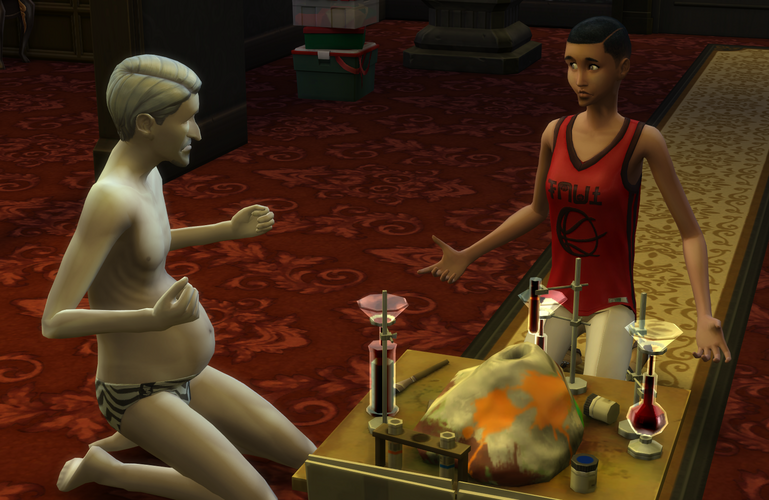 Allie: Dad please, for the sake of my eyes, put some clothes on!

Vlad: But speedos are manly. 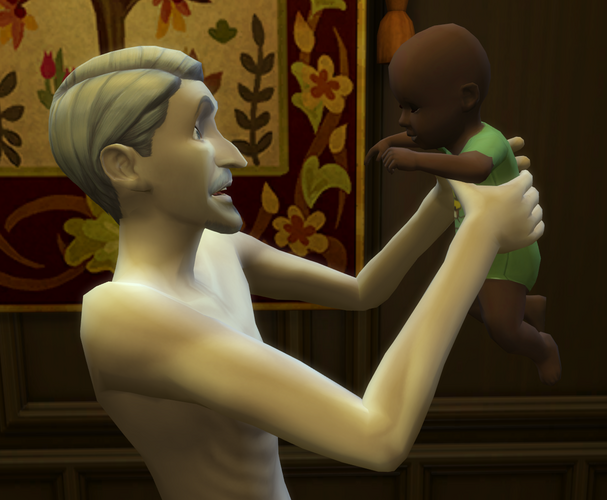 Vlad gave birth to the Grim Reaper’s twins. The first (pictured) is a boy called Mort (because Terry Pratchett) and the second is a girl called Belladonna (keeping with the death theme).

Belladonna is Vlad’s 33rd child so I am now exactly a third of the way through this challenge! 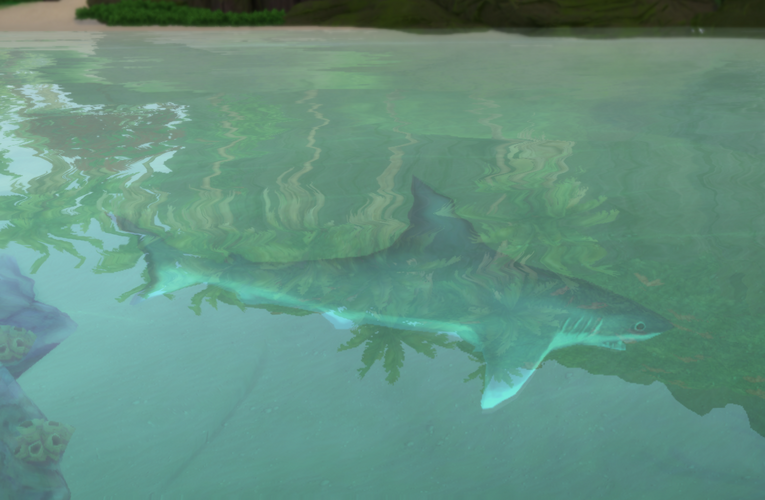 I saw my first shark! Thankfully Vlad did not become shark food.