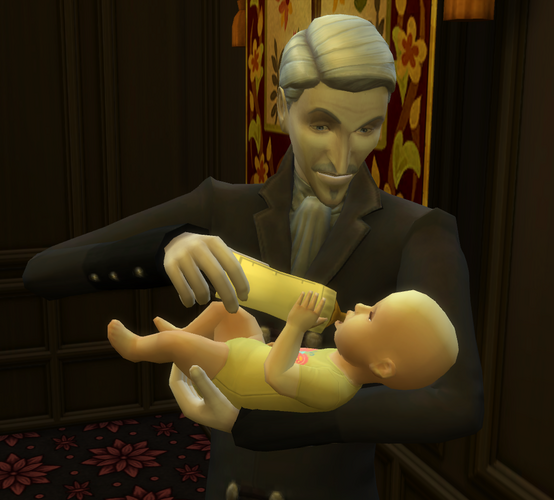 Just a (rare) picture of Vlad actually being a responsible parent to Kiera.

After Kiera’s birth, I realised Vlad had enough satisfaction points to purchase the fertility perk so we got that from the rewards store. 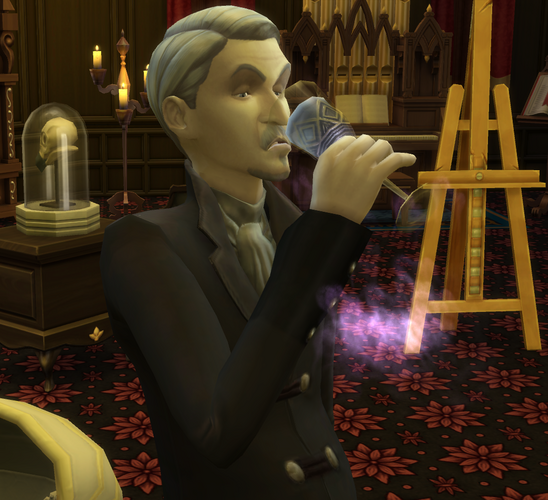 Having mastered the Vampire lore skill, Vlad brewed and drank the draught of reconfiguration. I was then able to give him maximum sun resistance so that he could safely stalk his donors during the day and also the highest level of vampiric charm (useful for obvious reasons) 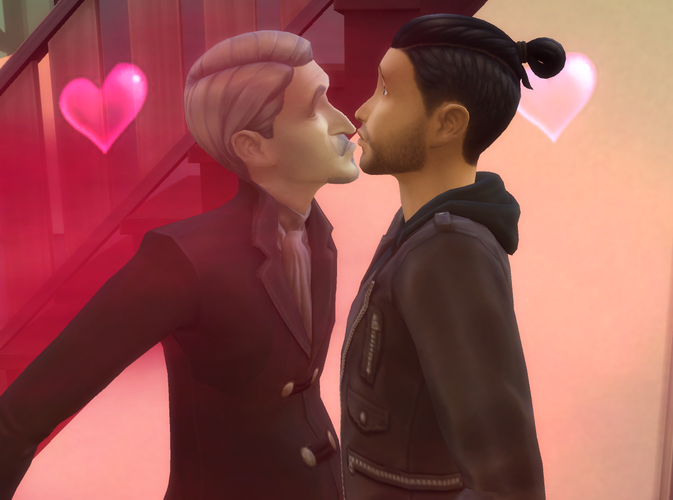 Vlad tested out his new powers on Akira (a future baby daddy). Honestly though, vampiric charm seems to be superfluous for Vlad. He has never had to use it. I think it’s the ‘enchanting introduction’ doing all the work for him. 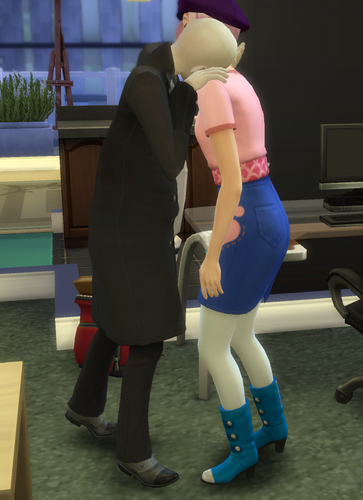 After hooking up with Akira, Vlad had a snack.

Then, he went about the worlds seducing as many hapless sims as he could for his aspiration. 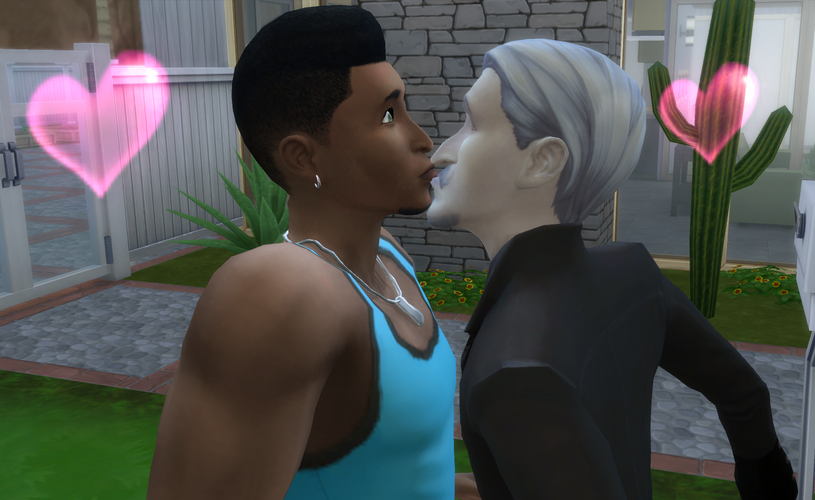 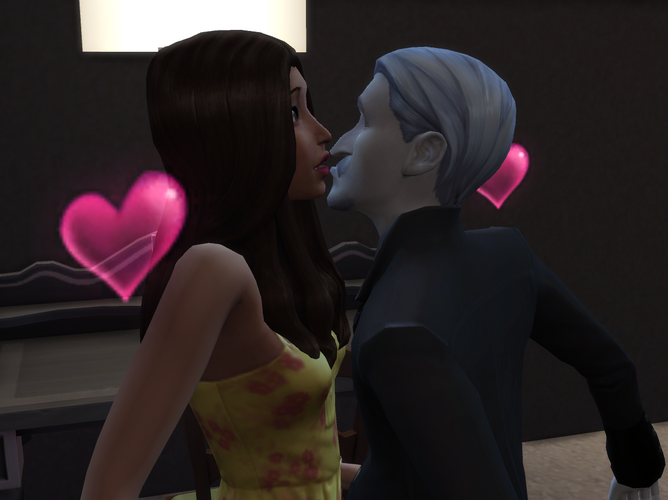 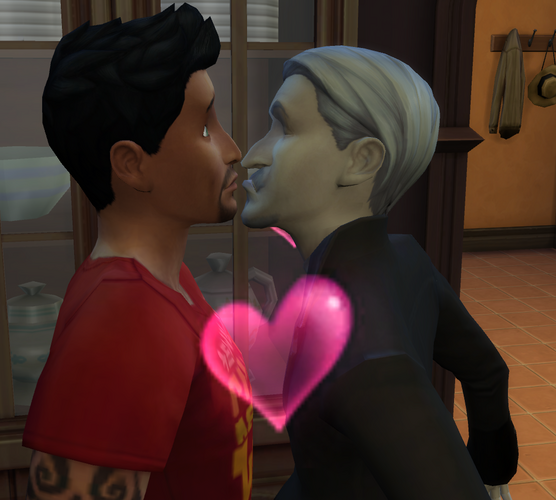 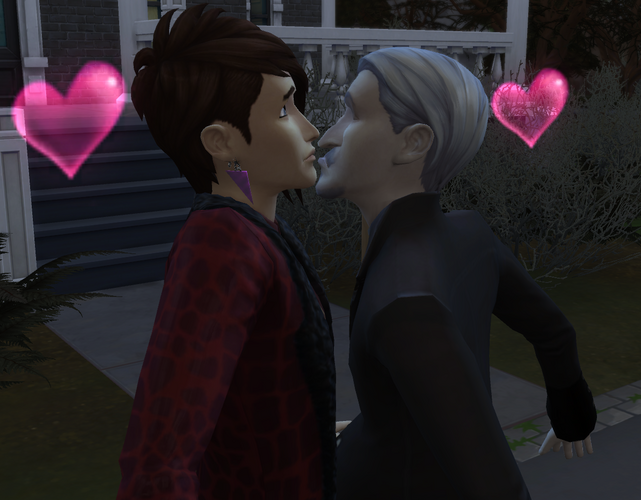 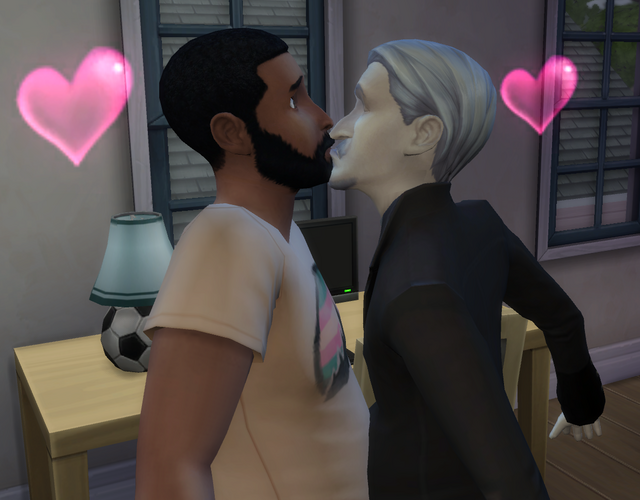 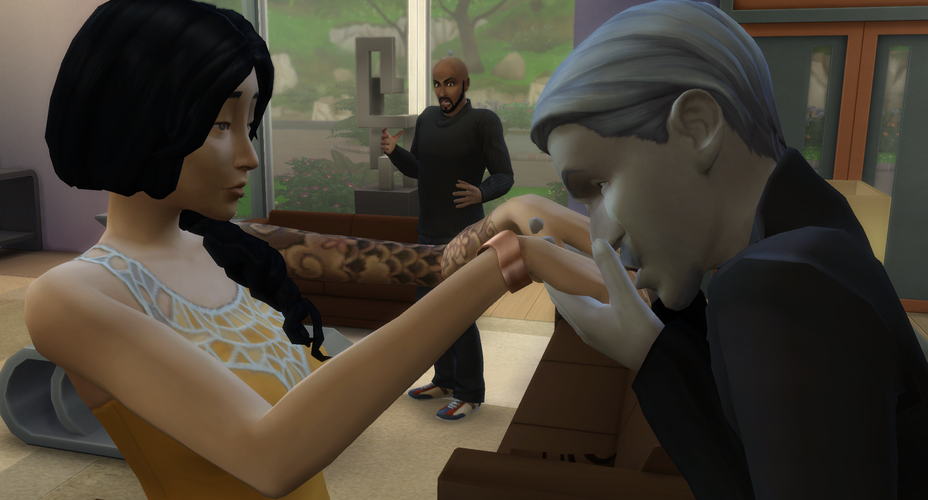 I didn’t manage to capture Vlad’s first kiss with Alice Spencer-Kim so have this picture where her husband is freaking out in the background. Oops. 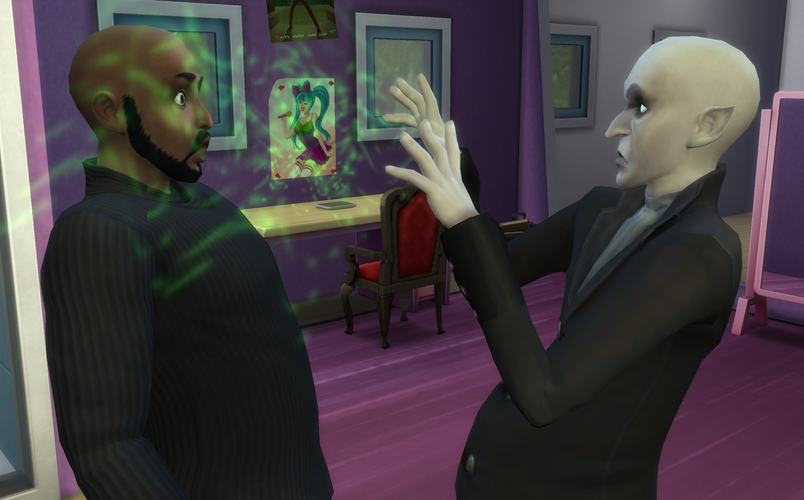 Vlad then added insult to injury (actually I think in this case it should be adding injury to insult) by compelling Alice’s husband to give up his sweet sweet plasma. 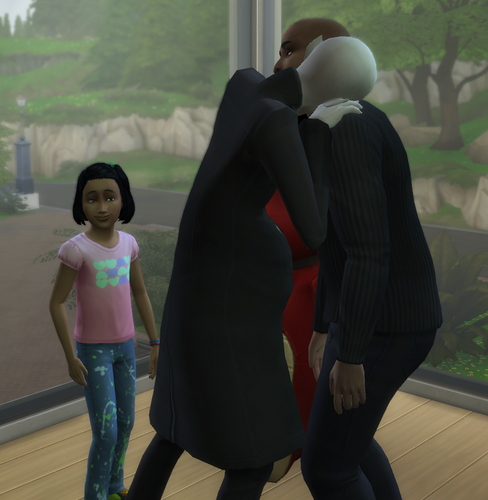 His daughter didn’t seem too bothered. 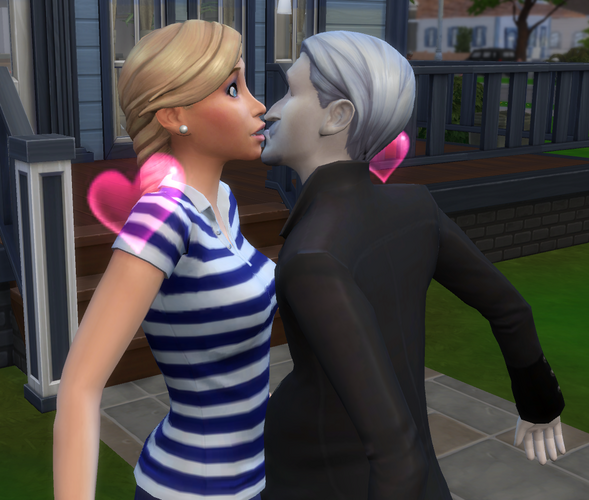 Kiera aged up and… Well… She clearly takes after her father. That chin though! Ouch. 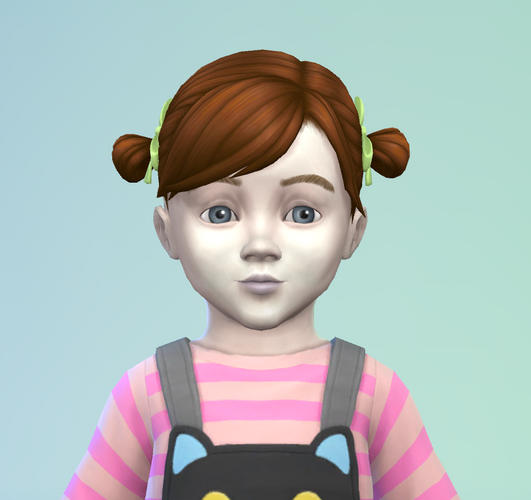 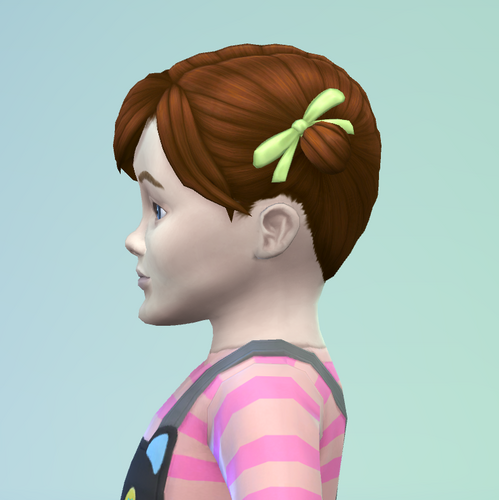 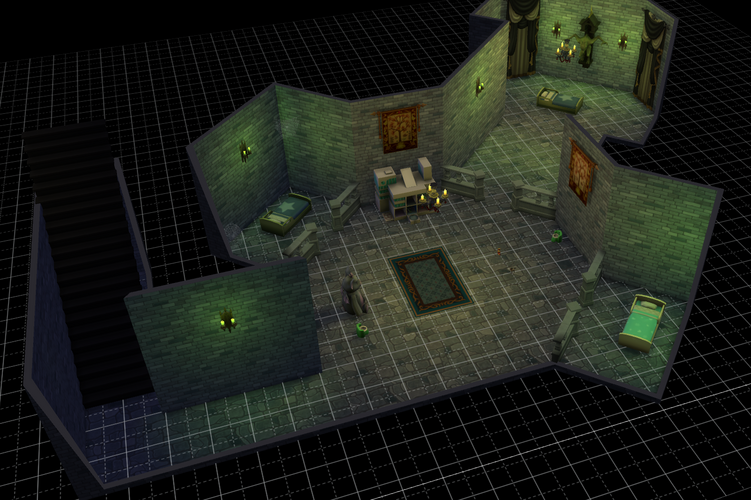 Now, I hate (Sim) toddlers. They are such needy little brats always running around everywhere and making a mess. But I think I have solved the problem. I replaced the coffins in Vlad’s dungeon with a few toddler beds and toys and put a door at the top of the stairs. I then put Kiera down into the dungeon and locked the door. I’m dragging food down there periodically so that she doesn’t die (aren’t I generous?). I think this is the first time I’ve enjoyed toddler parenting.

Vlad: Good, because you won’t see the light of day again until you become a child. 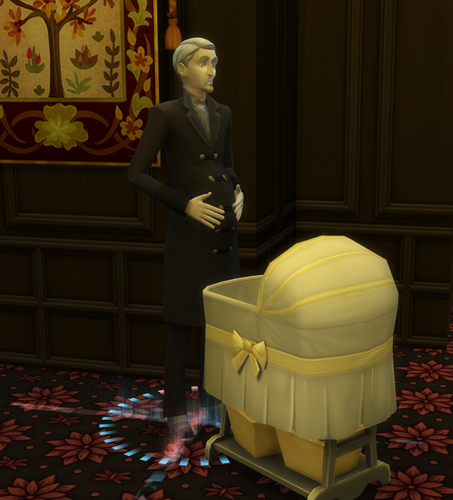 Vlad went into labour again. This time, I decided to let him give birth at home since we already had a bassinet handy. Weird lights appeared on the ground underneath him. Does anyone know what they are?

Vlad gave birth to twins: Reginald Straud (a boy) and Regan Straud (a girl). Their mother is Bella Goth. Regan got the little purple bat over her when she was born, so she is a vampire. Reginald didn’t, so he’s probably human. No worries, Vlad will turn him once he is a teen. 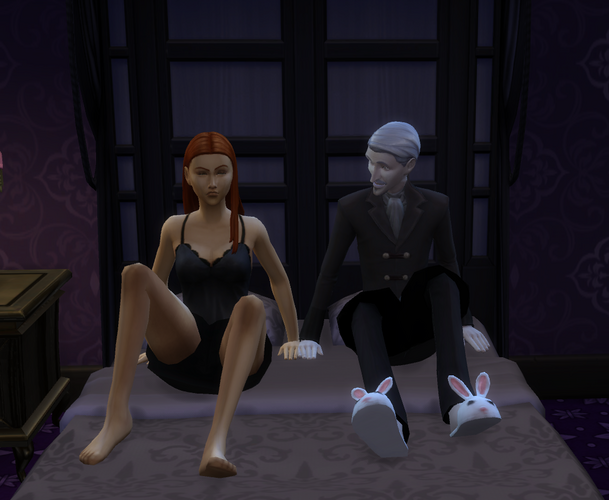 Vlad then got cracking on making some new babies with Morgan. 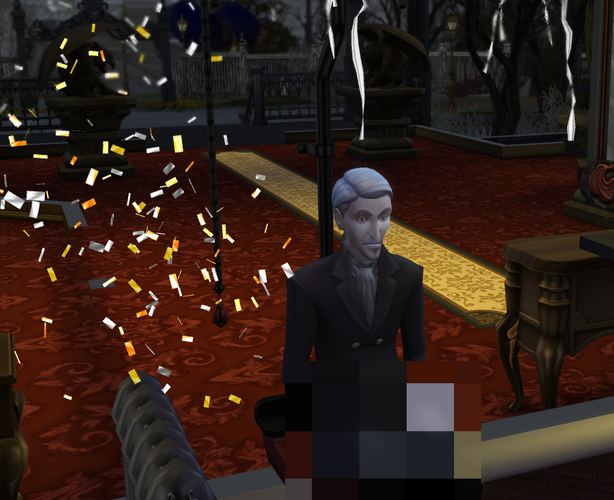 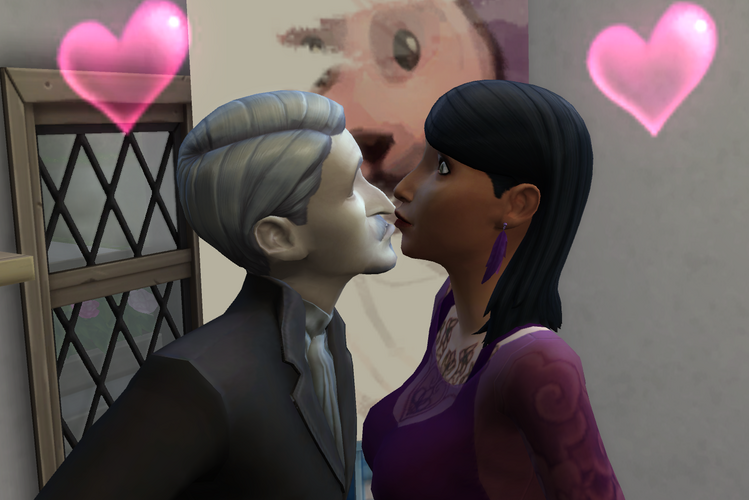 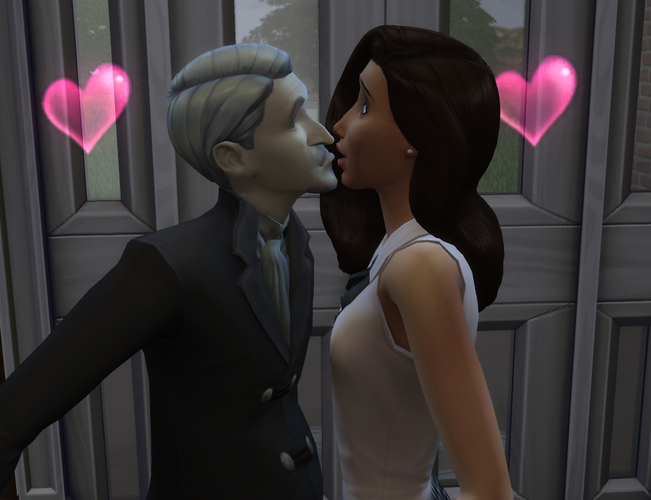 First kiss with Luna (aged up to a YA).

I think Kiera is enjoying the dungeon.

Reginald and Regan aged up. 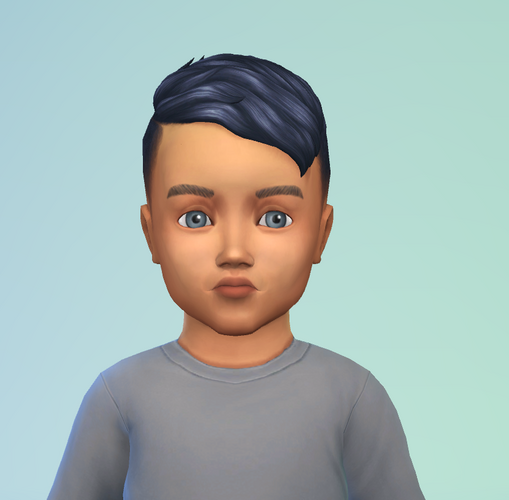 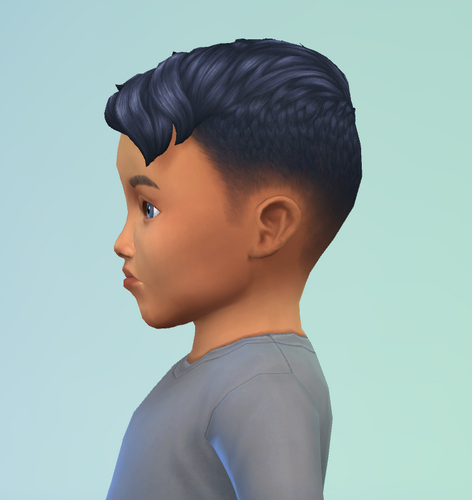 Hmm Regnald actually looks ok for now – though he definitely has Vlad’s mouth. 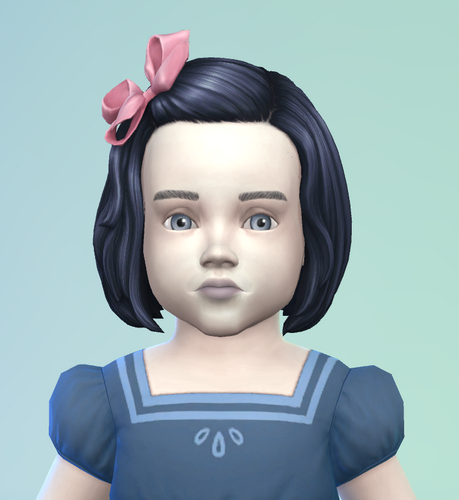 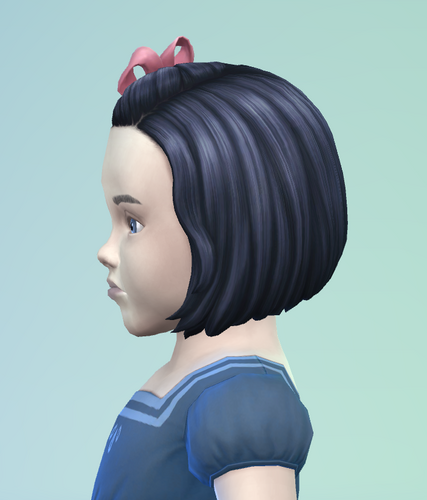 Regan also looks ok except for the pasty white skin. I’m sure Vlad’s genes will become more apparent in both of them as they age up though.

Kiera: Are those other people or am I hallucinating? Oh thank God, I’ve been so lonely!

I know we get to age up toddlers sooner if their skills are at the appropriate level, and kids if their grades are high enough… But as you can see my parenting tactics lean more towards the side of neglect so that’s not going to happen. 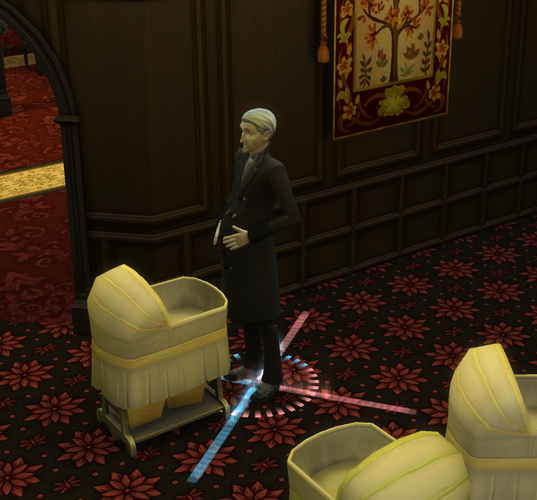 Vlad went into labour again and gave birth to another set of twins: Craig Straud (a boy) and Wilson Straud (another boy). Morgan is the mother. They are both vampires if I remember correctly. 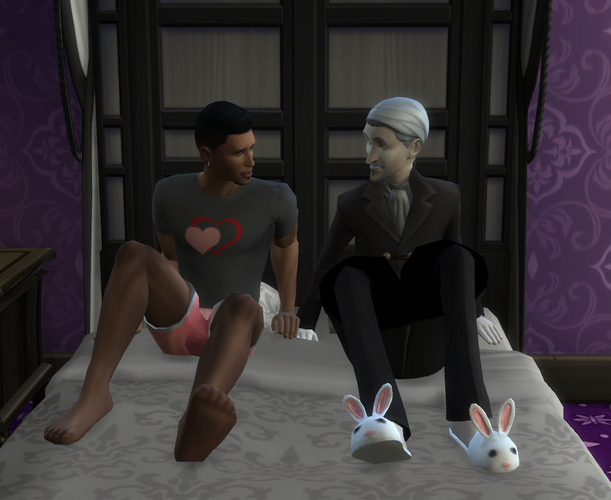 Vlad then got himself impregnated by Marcus Flex. 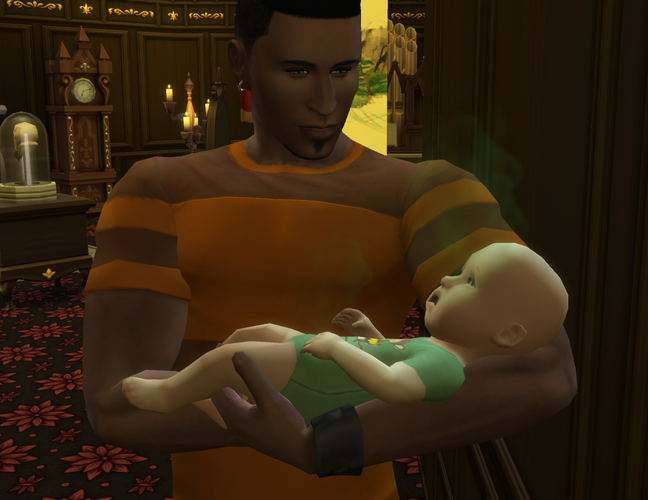 Marcus being sweet and spontaneously trying to comfort one of the babies.

Oh, I almost forgot to mention: Vlad completed his serial romantic aspiration (yay!) which means that he has the ‘player’ trait and his many girlfriends and boyfriends will never get jealous of him cheating. No more sneaking around necessary!

Vlad has been making quite a bit of money painting. As a vampire who doesn’t need to sleep he does have an advantage.

2 thoughts on “Chapter 3: The Dungeon of Toddlers”