Akira came back as a ghost! I love that when Ramona kissed him, you could actually see her nose inside his head.

Because Akira had died, Ramona had to ask him to be her boyfriend again. Fortunately, he said yes.

Mayor Whiskers was happy to have Ramona back in the family.

Juliet decided that her spirit animal is a bear. A purple bear. Donald was pretty understanding about the phase.

He even dressed up as a red bear. Looks like I have a family of furries on my hands!

Juliet doing her homework as a bear. I can’t bear to think what the kids at school said about her choice of outfit.

Despite being, well, dead, Akira invited Ramona out on a date. It was, in short: THE. WORST. DATE. EVER.

They arrived at the bar to find Salem Benali on the floor busy dying.

Cue sobbing and uncontrollable grief for a man they literally never met.

Moments later, Liberty Lee, who was working as one of the kitchen staff keels over and dies of old age too.

It all kinda killed the mood (pun very much intended).

Nothing like witnessing two deaths in quick succession to remind you of your own impending mortality. Nothing to do about it but drink.

Donald became an adult. I uh… may have forgotten his birthday. Sorry dude. 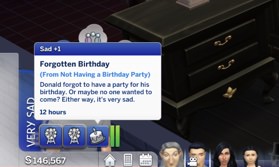 Then it was Shanice’s birthday. Fortunately, I did remember that and get a cake for her.

So yeah, Ramona is gone. I definitely intend to keep her around though, as she is my founder after all. I’m going to invite her to join the household and then move her out on her own. I don’t know whether I should bring back Akira for her or not.

She aged up into a teenager in a burst of light.

Here are some CAS pictures:

Ok, I don’t know if I’ve been spending too long looking at Ramona and Donald, but I actually think she’s really pretty! Her head is too big, her mouth is thin like Donald’s and her jaw is… Unique. But, other than that I’d say she is a huge improvement. I’m really pleased.

Juliet rolled the loves the outdoors trait (inherited from Shanice) and the painting aspiration.

I have found two potential partners for Juliet.

I don’t know how to decide between them. They are both so beautiful!